Compared with ferromagnetic counterparts, antiferromagnetic materials are considered as the future of spintronic applications since these materials are robust against the magnetic perturbation, produce no stray field, and display ultrafast dynamics. There are (at least) two sets of magnetic moments in antiferromagnets (with magnetization of the same magnitude but antiparallel directions) and ferrimagnets (with magnetization of the different magnitude). The coupled dynamics for the bipartite collinear antiferromagnets is modeled by a coupled system of Landau-Lifshitz-Gilbert equations with an additional term originated from the antiferromagnetic exchange, which leads to femtosecond magnetization dynamics. In this paper, we develop three Gauss-Seidel projection methods for micromagnetics simulation in antiferromagnets and ferrimagnets. They are first-order accurate in time and second-order in space, and only solve linear systems of equations with constant coefficients at each step. Femtosecond dynamics, Néel wall structure, and phase transition in presence of an external magnetic field for antiferromagnets are provided with the femtosecond stepsize. 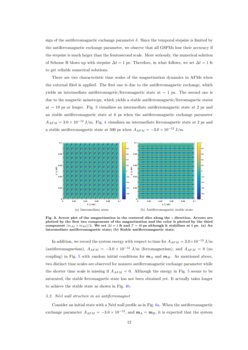 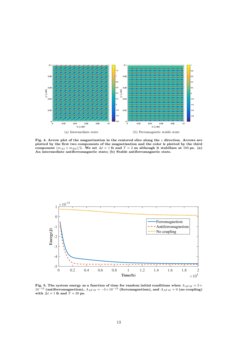 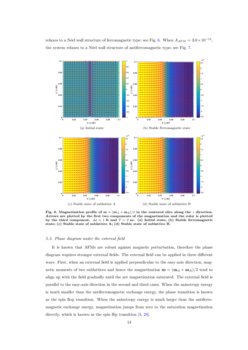 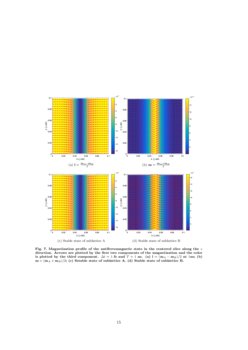 In this paper, we consider the three dimensional Vlasov equation with an...
Philippe Chartier, et al. ∙

An electron has both charge and spin properties. The active manipulation of spin degrees of freedom in solid-state systems is known as spintronics

Žutić et al. (2004); Gomonay and Loktev (2014). Most of researches have been focused on ferromagnets (FMs) for GHz-frequency magnetization dynamics in the past decades and the domain wall velocity can reach ∼100m/s. In early days, antiferromagnets (AFMs), however, are thought to be less effective for spintronic manipulations since they are robust against the magnetic perturbation and produce no stray field Baltz et al. (2018). In fact, it was latter realized that the robustness of AFMs with respect to the magnetic perturbation makes them better candidates for spintronic applications due to the high stability of domain wall structures. In addition, one striking feature in AFMs is the femtosecond magnetization dynamics due to the antiferromagnetic exchange coupling, which has been employed to generate THz-frequency magnetization dynamics Puliafito et al. (2019); Ivanov (2014); Sanches-Tejerina et al. (2019), and boosts the domain wall velocity in AFMs to ∼10,000m/s Gomonay et al. (2016a, b); Shiino et al. (2016). Moreover, room-temperature antiferromagnetic order has been found over a broad range of materials, such as metal, semiconductor, and insulator, which can be used in spintronics devices such as racetrack memories, memristors, and sensors Sanches-Tejerina et al. (2019); Baltz et al. (2018); Wadley et al. (2016); Fiebig et al. (2008).

From the modeling perspective, magnetization M is the basic quantity of interest. In ferromagnetic materials, its dynamics is modeled by the Landau-Lifshitz-Gilbert (LLG) equation Landau and Lifshitz (1935); Gilbert (1955) with the property that |M|=Ms where Ms is the saturation magnetization. In general, an AFM contains n magnetic sublattices and the magnetization M=∑nλ=1Mλ=0 with Mλ≠0. Most common AFMs, such as FeMn and NiO, have two sublattices A and B, associated with two magnetization fields MA and MB satisfying M=MA+MB=0. For each sublattice, its magnetization satisfies a LLG equation with an antiferromagnetic exchange term which couples these two equations. In the physics community, by introducing another order parameter L=MA−MB, reduced models for AFMs are developed for describing magnetization dynamics Ivanov (2014); Baltz et al. (2018).

At a first glance, numerical methods for FMs can be directly applied to AFMs and ferrimagnets with minor modifications. However, pros and cons of different methods for FMs may not be directly transferred. For example, explicit methods require sub-picosecond stepsize in micromagnetics simulation. For AFMs or ferrimagnets, the stepsize becomes sub-femtosecond for explicit methods while the time scale of interest is of nanoseconds. The underlying reason is that the antiferromagnetic exchange term poses an characteristic time scale of femtoseconds on magnetization dynamics. Even unconditionally stable implicit and semi-implicit schemes have to resolve the magnetization dynamics at femtosecond scales in order to capture the correct physics. Implicit schemes solve a nonlinear system of equations at each step. From FMs to AFMs, the dimension of the nonlinear system is doubled with possibly more solutions (locally stable magnetic structures). In semi-implicit schemes, the nonlinear structure of the coupled system does not bring any difficulty in an explicit way and only the computational complexity is doubled. Therefore, semi-implicit methods provide the best compromise between stability and efficiency. Gauss-seidel projection methods (GSPMs) Wang et al. (2001); Li et al. (2019) are of our first choice since only linear systems of equations with constant coefficients needs to be solved at each step. As shown in the paper, the coupled system of LLG equations can be solved by GSPMs with the computational complexity doubled at each step. Due to the antiferromagnetic exchange, the stepsize in GSPMs is femtosecond as expected.

The rest of this paper is organized as follows. We introduce the model for AFMs and ferrimagnets in Section 2. The corresponding Gauss-Seidel projection methods are described in Section 3. Their accuracy with respect to temporal and spatial stepsizes is validated in Section 4. Femtosecond magnetization dynamics, Néel wall structures, and phase transition in presence of a magnetic field are simulated for AFMs in Section 5. Conclusions are drawn in Section 6.

2 Model for antiferromagnets: A coupled system of Landau-Lifshitz-Gilbert equations

(1) can be viewed as two sets of LLG equations for MA and MB with the antiferromagnetic exchange coupling in (2).

Details of the four terms in (2) are described as follows:

Thus, the free energy of an antiferromagnetic or ferrimagnetic material is explicitly written as

The system of LLG equations (1) can be rewritten equivalently as

and the effective fields are

is the unit outward normal vector along

Γ. It’s worth mentioning that the above model is also used for ferrimagnetic materials with one of magnetization, |mB|<1.

It is easy to check from (7) that the following statement is true.

The antiferromagnetic exchange (3) plays an important role in AFMs. Consider the case when δ→∞ and the system (7) reduces to

Combining the above two equations with m=(mA+mB)/2, we get an equation of Bernoulli type

The analytic solution of (11) is

with C a positive constant determined by the initial condition.

The definition of m yields

Lemma 2 implies that the coupled system convergences to an antiferromagnetic state exponentially fast with the exponent proportational to the antiferromagnetic exchange parameter δ. This is indicated numerically by the energy decay in Figure 5.

This is a direct generalization of the original GSPM Wang et al. (2001) to the antiferromagnetic or ferrimagnetic case. For (7), the GSPM works as follows. Define the vector field for the splitting procedure:

Note that 0<s⩽1 within the definition |mB|=s. s=1 is for AFMs and s<1 is for ferrimagnetics.

Scheme B reduces the computational cost further by the introduction of two sets of approximations. At each step, one set of solution is updated in the implicit Gauss-Seidel step and the other is updated in the projection step.