This article proposes a sparse computation-based method for optimizing neural networks for reinforcement learning (RL) tasks. This method combines two ideas: neural network pruning and taking into account input data correlations; it makes it possible to update neuron states only when changes in them exceed a certain threshold. It significantly reduces the number of multiplications when running neural networks. We tested different RL tasks and achieved 20-150x reduction in the number of multiplications. There were no substantial performance losses; sometimes the performance even improved. 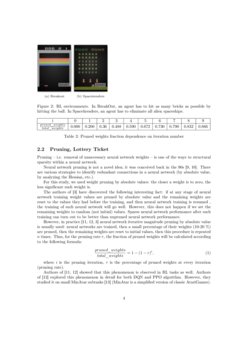 The use of neural networks as function approximators has enabled many ad...
Christopher Lazarus, et al. ∙

Generalization and reuse of agent behaviour across a variety of learning...
Pascal Klink, et al. ∙

Playing the lottery with rewards and multiple languages: lottery tickets in RL and NLP

Many modern neural networks consume an enormous amount of computing resources. This is due to the long time it takes to train a neural network, large data sets, and large number of parameters in them. Some recent studies [blalock2020state, hinton_sparse, frankle2018lottery] showed that many weights are excessive and can be removed without loss (or with a small loss) of neural network performance.

On the other hand, input data for some neural network tasks are sequences of highly correlated frames. Video / audio processing and RL tasks are good examples of such tasks. In such tasks, what a neural network saw at step t-1 is very similar to what it sees now at step t. Some studies propose various optimization algorithms for neural networks handling such data [sparnet2020, delta_rnn, oconnor_sigma]. These approaches are based on the idea of asynchronous update of the states of only those neurons that changed significantly compared to the previous step.

yi=f(wi1∗x1+...+win∗xn), which is a superposition of a nonlinear function and Multiply and Accumulate (MAC) operation. A MAC operation is the summation of the results of products of the input vector elements and the respective weights. If at least one operand in any of such multiplications is zero, then such multiplication could be omitted. We will call a multiplication of two numbers significant if both its operands are not equal to zero.

It is worth noting that brain neurons also work asynchronously and send signals to each other only when necessary. In addition, there are no dense layers in the brain, while they are characteristic of classic neural networks. This suggests that the combination of the proposed methods is biologically inspired.

In RL tasks, an agent receives current environment state s as input, after which it selects action a, and then goes to new state s′ and receives certain reward r. The agent’s goal is to maximize the sum of rewards.

, i.e. the probability to get into state

s′ at the next step when selecting action a in state s. R=Ra(s,s′) is the function describing receiving rewards; it determines how big is a reward that an agent will receive when transitioning from state s to state s′ by selecting action a.

A strategy an agent uses to selects its actions a depending on state s is called a policy and is usually denoted by letter πθ Where θ denotes policy parameters.

One way to solve an RL task are Q-function-based approaches. A Q-function has two parameters – s and a. Qπθ(s,a) determines what reward agent πθ will receive if it performs action a from state s and then follows policy πθ. If complete information about an environment is available, the exact value of a Q-function can be calculated. However, the knowledge of the world is usually incomplete and the number of possible states is enormous. Therefore, a Q-function has to be approximated using neural networks.

This approach was successfully demonstrated by DeepMind in [mnih2015human]. The neural network architecture presented in this study is called DQN (Deep Q-Network). For the purposes of this study, it is the main architecture for optimization.

This neural network is as follows:

The neural network structure is shown in table:

Double q-learning [double_q_learning] was also used for the training.

We experimented and optimized within the following RL environments: Breakout, SpaceInvaders.

Pruning – i.e. removal of unnecessary neural network weights – is one of the ways to structural sparsity within a neural network.

Neural network pruning is not a novel idea; it was conceived back in the 90s [lecun1990optimal, hassibi1993surgeon]. There are various strategies to identify redundant connections in a neural network (by absolute value, by analyzing the Hessian, etc.).

For this study, we used weight pruning by absolute values: the closer a weight is to zero, the less significant such weight is.

However, in practice [lotteryRL1, vischer2021lottery, frankle2018lottery] neural network iterative magnitude pruning by absolute value is usually used: neural networks are trained, then a small percentage of their weights (10-20 %) are pruned, then the remaining weights are reset to initial values, then this procedure is repeated n times. Thus, for the pruning rate r, the fraction of pruned weights will be calculated according to the following formula:

where i is the pruning iteration, r is the percentage of pruned weights at every iteration (pruning rate).

The main idea behind this approachn[yousefzadeh2019asynchronous, sparnet2020] ] is to use temporal sparsity when working with sequential data.

The output values of the neural network layer number k+1 can be written as:

xk+1(t) is required, which will require n2+n multiplications. However, the following should be noted:

However, this remark does not lead to neural network optimization by itself. But we can introduce threshold T for output value changes Δxk(t) such that recomputation of succeeding neurons is started only when an output value exceeds this threshold.

Authors of [sparnet2020, yousefzadeh2019asynchronous] call this approach "Hysteresis Quantizer". To implement it, it is necessary to introduce an additional variable into each neuron; such variable will be used to record last transmitted value. Thus, the following algorithm will be run on each neuron:

Stage 2: Then we apply the delta network algorithm to these neural networks. As a result, we get a set of new neural networks using both structured and temporal sparsity. Selection of one neural network from such set depends on the desirable balance between the number of significant multiplications and neural network performance.

2.5.1 Number of multiplications in an unoptimized neural network

The following formula can be used to count multiplications in dense layer k:

General results for all layers are presented in table LABEL:table:_ops_common. It should be noted that these results are universal for any game and for any neural network inference.

2.5.2 The number of multiplications in optimized neural networks

It is clear that the degree of weight sparsity will affect the number of non-zero multiplications. It should be taken into account that the percentage of pruned weights can differ in different layers.

Using the delta layer provides different levels of temporal sparsity depending on selected threshold, layer, and input data. That is why average statistics on neuron activations was used for neural network runs. Examples of estimated numbers of significant multiplications are given in the next section and in tables 4, 5.

The results are not as good in SpaceInvaders, but they are still noteworthy. The delta neural network variant allows playing without losing performance at 73 % sparsity and with 406486 significant multiplications, which is 22.9 times less than the number of multiplications in an unoptimized neural network. A layer-wise operation analysis is shown in table 5.

The results turn out to be dependent on the game the agent is playing. This can be explained by the fact that the SpaceInvaders game has a lot more changing pixels at each time step than the Breakout game (in the Breakout only the playground and the ball move, while in the SpaceInvaders several objects can move at once - shots, a ship and aliens). This is well confirmed by the difference in Delta sparsity level when playing Breakout and SpaceInvaders (see tables 4 5).

Our reward metric results are similar to the results from [lotteryRL1, vischer2021lottery], where the worst results were in the SpaceInvaders with performance dropping very quickly as neural network sparsity grew.

Despite clear advantages of this approach, there are very few opportunities to use the existing hardware to effectively implement it today. This is due to modern GPUs being designed for handling dense matrices. Nevertheless, there are attempts to turn the situation. Nvidia began offering hardware support of sparse matrix operations on one of its latest Tesla A100 GPUs; however, the maximum supported sparsity is only 75 % so far [krashinsky2020nvidia].

The authors of the abovementioned DeltaNetwork algorithm work for GrAIMatterLabs that introduced the NeuronFlow architecture-based GrAIOne processor that supports delta neuron based neural network design.

This study is the first to demonstrate large multiplication redundancy in inference of neural networks handling RL tasks. Minimizing the number of multiplications becomes critical in areas where computation energy efficiency is important. Such areas include Edge AI and robotics. When speaking of the latter, RL algorithm optimization becomes extremely relevant. Although there is currently no suitable hardware available to take full advantage of these benefits, this research highlights the importance and potential of this area.