Multiplierless and Sparse Machine Learning based on Margin Propagation Networks

The new generation of machine learning processors have evolved from multi-core and parallel architectures (for example graphical processing units) that were designed to efficiently implement matrix-vector-multiplications (MVMs). This is because at the fundamental level, neural network and machine learning operations extensively use MVM operations and hardware compilers exploit the inherent parallelism in MVM operations to achieve hardware acceleration on GPUs, TPUs and FPGAs. A natural question to ask is whether MVM operations are even necessary to implement ML algorithms and whether simpler hardware primitives can be used to implement an ultra-energy-efficient ML processor/architecture. In this paper we propose an alternate hardware-software codesign of ML and neural network architectures where instead of using MVM operations and non-linear activation functions, the architecture only uses simple addition and thresholding operations to implement inference and learning. At the core of the proposed approach is margin-propagation based computation that maps multiplications into additions and additions into a dynamic rectifying-linear-unit (ReLU) operations. This mapping results in significant improvement in computational and hence energy cost. The training of a margin-propagation (MP) network involves optimizing an L_1 cost function, which in conjunction with ReLU operations leads to network sparsity and weight updates using only Boolean predicates. In this paper, we show how the MP network formulation can be applied for designing linear classifiers, multi-layer perceptrons and for designing support vector networks. 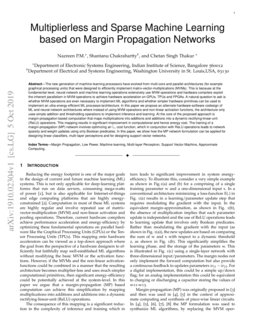 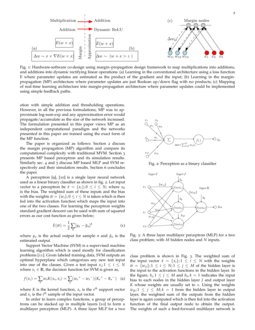 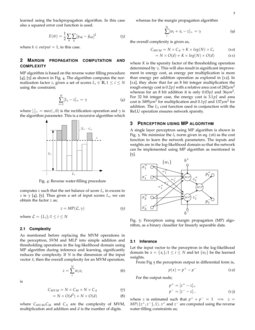 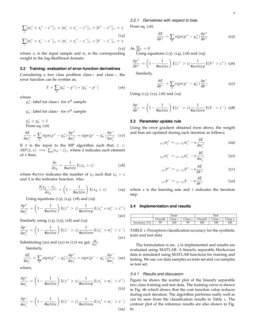 Reducing the energy footprint is one of the major goals in the design of current and future machine learning (ML) systems. This is not only applicable for deep-learning platforms that run on data servers, consuming mega-watts of power

[al2015efficient], but is also applicable for Internet-of-things and edge computing platforms that are highly energy-constrained [li2018learning]

. Computation in most of these ML systems are highly regular and involve repeated use of matrix-vector-multiplication (MVM) and non-linear activation and pooling operations. Therefore, current hardware compilers achieve performance acceleration and energy-efficiency by optimizing these fundamental operations on parallel hardware like the Graphical Processing Units (GPUs) or the Tensor Processing Units (TPUs). This mapping onto hardware accelerators can be viewed as a top-down approach where the goal from the perspective of a hardware designers to efficiently but faithfully map well-established ML algorithms without modifying the basic MVM or the activation functions. However, if the MVMs and the non-linear activation-functions could be combined in a manner that the resulting architecture becomes multiplier-less and uses much simpler computational primitives, then significant energy-efficiency could be potentially achieved at the system-level. In this paper we argue that a margin-propagation (MP) based computation can achieve this simplification by mapping multiplications into additions and additions into a dynamic rectifying-linear-unit (ReLU) operations.

The consequence of this mapping is a significant reduction in the complexity of inference and training which in turn leads to significant improvement in system energy-efficiency. To illustrate this, consider a very simple example as shown in Fig.1(a) and (b) for a comprising of a single training parameter w and a one-dimensional input x. In a conventional architecture minimizing a loss-function E(.) in Fig. 1(a) results in a learning/parameter update step that requires modulating the gradient with the input. In the equivalent margin-approximation, as shown in Fig. 1(b), the absence of multiplication implies that each parameter update is independent and the use of ReLU operations leads to learning update that involves only Boolean predicates. Rather than modulating the gradient with the input (as shown in Fig. 1(a)), the new updates are based on comparing the sum of w and x with respect to a dynamic threshold z, as shown in Fig. 1(b). This significantly simplifies the learning phase, and the storage of the parameters w. This is illustrated in Fig. 1(c) using a single-layer network with three-dimensional input/parameters. The margin nodes not only implement the forward computation but also provide a continuous feedback to updates parameters w11−w13. For a digital implementation, this could be a simple up/down flag; for an analog implementation this could be equivalent to charging or discharging a capacitor storing the values of w11-w13.

Margin-propagation (MP) was originally proposed in [chakrabartty2004margin] and then was used in [gu2009sparse, gu2012theory] in the context of approximate computing and synthesis of piece-wise linear circuits. In [chakrabartty2007gini, chakrabartty2005sub, kucher2007energy, gu2009sparse, gu2012theory] the MP formulation was used to synthesize ML algorithms, by replacing the MVM operation with simple addition and thresholding operations. However, in all the previous formulations, MP was to approximate log-sum-exp and any approximation error would propagate/accumulate as the size of the network increased. The formulation presented in this paper views MP as an independent computational paradigm and the networks presented in this paper are trained using the exact form of the MP function.

The paper is organized as follows: Section 2 discuss the margin propagation (MP) algorithm and compare its computational complexity with traditional MVM. Section 3 presents MP based perceptron and its simulation results. Similarly sec. 4 and 5 discuss MP based MLP and SVM respectively and their simulation results. Section 6 concludes the paper.

A perceptron [freund1999large, bishop2006pattern] is a single layer neural network used as a linear binary classifier as shown in fig. 2. Let input vector to a perceptron be ¯x={xi};0≤i≤N; where x0 is the bias. The weighted sum of these inputs and the bias with the weights ¯w={wi};0≤i≤N is taken which is then fed into the activation function which maps the input into one of the two classes. For learning the perceptron weights standard gradient descent can be used with sum of squared errors as our cost function as given below;

where yn is the actual output for sample n and ^yn is the estimated output.

. Given labeled training data, SVM outputs an optimal hyperplane which categorizes any new test input into one of the classes. Given a test input

xi;1≤i≤N where xi∈R, the decision function for SVM is given as,

where K is the kernel function, xs is the sth support vector and xi is the ith sample of the input vector.

In order to learn complex functions, a group of perceptrons can be stacked up in multiple layers [bishop2006pattern] to form a multilayer perceptron (MLP). A three layer MLP for a two class problem is shown in Fig. 3. The weighted sum of the input vector ¯x={xi};1≤i≤N with the weights ¯w={wij};1≤i≤N;1≤j≤M of the hidden layer is the input to the activation functions in the hidden layer. In the figure, bj,1≤j≤M and bk,k=1 indicates the input bias to each nodes in the hidden layer J and output layer K whose weights are usually set to 1. Using the weights wjk;1≤j≤M;k=1

from the hidden layer to output layer, the weighted sum of the outputs from the hidden layer is again computed which is then fed into the activation function of the final output node to obtain the output. The weights of such a feed-forward multilayer network is learned using the backpropagation algorithm. In this case also a squared error cost function is used.

where k∈output=1, in this case.

MP algorithm is based on the reverse water filling procedure [gu2009sparse, gu2012theory] as shown in Fig. 4. The algorithm computes the normalization factor z, given a set of scores Li∈R,1≤i≤N using the constraint;

where [.]+=max(.,0) is the rectification operation and γ is the algorithm parameter.

This is a recursive algorithm which computes z such that the net balance of score Li in excess to z is γ [gu2009sparse, gu2012theory]. Thus given a set of input scores Li, we can obtain the factor z as;

As mentioned before replacing the MVM operations in the perceptron, SVM and MLP into simple addition and thresholding operations in the log-likelihood domain using MP algorithm during inference and learning, significantly reduces the complexity. If N is the dimension of the input vector ¯x, then the overall complexity for an MVM operation,

where CMVM,CM and CA are the complexity of MVM, multiplication and addition and d is the number of digits.

whereas for the margin propagation algorithm

the overall complexity is given as,

where K is the sparsity factor of the thresholding operation determined by γ. This will also result in significant improvement in energy cost, as energy per multiplication is more than energy per addition operation as explored in [horowitz20141]. In [horowitz20141], they show that for an 8 bit integer multiplication the rough energy cost is 0.2pJ with a relative area cost of 282μm2 whereas for an 8 bit addition it is only 0.03pJ and 36μm2. For 32 bit integer case, the energy cost is 3.1pJ and area cost is 3495μm2 for multiplication and 0.1pJ and 137μm2 for addition. The L1 cost function used in conjunction with the ReLU operation ensures network sparsity.

Let the input vector to the perceptron in the log-likelihood domain be x={xi};1≤i≤N and let {wi} be the learned weights.

From Fig 5 the perceptron output in differential form is,

For the output node;

where xi is the input sample and wi is the corresponding weight in the log-likelihood domain.

Considering a two class problem class+ and class−, the error function can be written as;

If ¯x is the input to the MP algorithm such that, z=MP(¯x,γ)⟹∑d[xd−z]+ where d indicates each element of ¯x then,

where #active indicates the number of xd such that xd>z and 1 is the indicator function. Also

3.2.1 Derivatives with respect to bias

Using the error gradient obtained from above, the weight and bias are updated during each iteration as follows;

where ϵ is the learning rate and τ indicates the iteration step.

Figure 5(a) shows the scatter plot of the linearly separable two class training and test data. The training curve is shown in Fig. 5(b) which shows that the cost function value reduces during each iteration. The algorithm performs really well as can be seen from the classification results in Table I. The contour plot of the inference results are also shown in Fig. 5(c).

4 Multilayer perceptron based on MP algorithm

Figure 7 shows an MLP synthesized using MP algorithm. The network consists of an input layer I, a hidden layer J and an output layer K with 2 nodes in the hidden layer. The network parameters are learned by minimizing the l1 norm cost function as shown in (40). We use an algorithm similar to backpropagation to evaluate the error gradient in-order to update the network parameters. The red arrows indicate the backward propagation of error information w.r.t the weights w+11 and w−11 .

Let the input vector in the log-likelihood domain be x={xi};1≤i≤N. Let {wij} and {wjk} be the set of learned weights from node i of layer I to the node j in layer J and node j of layer J to the node in output layer K respectively.

From Fig 7 the output in differential form is,

For the output layer K;

For the hidden layer J;

Considering a two class problem class+ and class−, the error function can be written as;

4.2.1 Derivatives with respect to bias

4.2.2 Derivatives with respect to bias