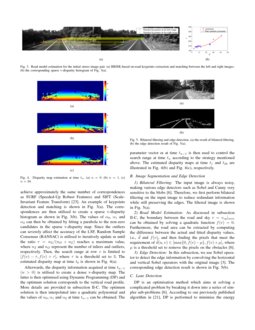 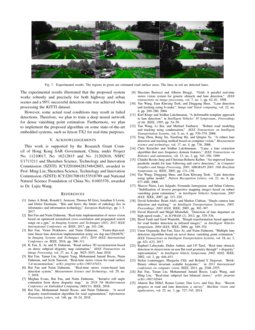 THE deployment of autonomous vehicles has been increasing rapidly since Google first launched their self-driving car project in 2009 [1]. In recent years, with a number of technology breakthroughs being witnessed in the world where science fiction inventions are now becoming a reality, the competition to commercialise driver-less vehicles by companies like GM, Waymo and Daimler-Bosch is fiercer than ever [2]. For instance, Volvo conducted a series of self-driving experiments involving around 100 cars in China [3]. The 5G network is also utilised in self-driving vehicles to help them communicate with each other [2]. Furthermore, the computer stereo vision technique has also been prevalently used in prototype vehicle road tests to provide the depth information for various automotive applications, e.g., road condition assessment [4, 5], lane and obstacle detection [6, 3], and vehicle state estimation [7, 8].

[6]. The former extracts local and useful information of an image, such as edges, texture and colour, for the segmentation of lanes and road boundaries [9]. On the other hand, the model-based algorithms aim to represent the lanes with mathematical equations, e.g., linear, parabolic, linear-parabolic and spline, based upon some common road geometry assumptions [10]. The linear model works well for lanes with a low curvature [3], but a more flexible road model is inevitable when lanes with a higher curvature are considered. Therefore, some algorithms [11, 12, 13, 14] use a parabolic model to represent the lanes with a constant curvature. To address some more complex cases, Jung et al. proposed a combination of linear and parabolic lane models, where the far lanes are modelled as parabolas whereas the nearby lanes are represented as linear models [15]

. In addition to the models mentioned above, the spline model is an alternative method whereby the lane pixels are interpolated into an arbitrary shape

[10, 16]. However, the more parameters introduced into a flexible model, the higher will be the computational complexity of the algorithm. Therefore, some authors resort to additional important properties of 3-D imaging techniques, such as disparity estimation [6], instead of being limited to only 2-D information.

One of the most prevalently used 3-D based methods is Inverse Perspective Mapping (IPM). With the assumption that two lanes are parallel to each other in the World Coordinate System (WCS), IPM can map a 3-D scenery into a 2-D bird’s eye view [17]. In addition, some authors [18, 19, 20, 21] proposed to use the vanishing point pvp=[uvp,vvp]⊤ to model lane markings and road boundaries, where uvp and vvp denote the vertical and horizontal coordinates of the vanishing point, respectively. An example of vanishing point is illustrated in Fig. 1, where l1 and l2 are two parallel straight lines. Two 3-D points pW1 and pW2 in the WCS are projected on the image plane π and their corresponding points in the Image Coordinate System (ICS) are p1 and p2, respectively. Therefore, the projections of l1 and l2 in the image are two straight lines and they intersect at the vanishing point pvp. However, their algorithms work well only if the road surface is assumed to be flat or the camera parameters are known. Hence, some researchers pay closer attention to the disparity information which can be obtained using either active sensors, e.g., radar and laser, or passive sensors, e.g., stereo cameras [21]. Since Labayrade et al. proposed the concept of “v-disparity” in 2002 [22], disparity information has been widely used to enhance the robustness of the lane detection systems. The work presented in [21] shows a particular instance where the disparity information is successfully combined with a lane detection algorithm to estimate pvp for both flat and non-flat road surfaces. At the same time, the obstacles containing a lot of redundant information can be eliminated by comparing the actual and fitted disparity values. However, the estimation of pvp

is greatly affected by the outliers when performing the Least Squares Fitting (LSF), and the lanes are sometimes wrongly detected because the selection of plus-minus peaks is not always effective. Moreover, achieving real-time performance is still challenging in

Firstly, we create a vector

α=[α0,α1,α2]⊤ to store the parameters of the road model. The keypoints P=[p0,p1,…,pn]⊤ and Q=[q0,q1,…,qn]⊤ are then extracted and matched using Binary Robust Invariant Scalable Keypoints (BRISK), where pn=[upn,vpn]⊤ and qn=[uqn,vqn]⊤ denote the matched keypoints in the left and right images, respectively. P and Q are then utilised to create a sparse v-disparity histogram from which the road model f(v)=α0+α1v+α2v2 can be estimated. The search range for the disparity estimation at time t0 is subsequently controlled according to f(v), where the search range at row v is limited to [f(v)−τ,f(v)+τ]. The lanes are then detected using our previously published method in [21]. As for the disparity estimation at time tn+1 (n≥0), α is estimated by creating a dense v-disparity map using the disparity information acquired at time tn (n≥0) and then fitting a parabola to the best path extracted from the dense v-disparity map. This not only improves the accuracy of the disparity estimation at time tn+1 but also boosts its processing speed.

The remainder of the paper is structured as follows: Section II presents the proposed lane detection algorithm. In Section III, the experimental results are illustrated and the evaluation of the proposed system is carried out. Finally, Section IV summaries the paper and provides some recommendations for future work.

The proposed disparity estimation approach in this paper is developed based on our previously published algorithm [2], where the search range at the position of (u,v) is propagated from three estimated disparities at the positions of (u−1,v), (u,v) and (u+1,v). In this subsection, we optimise the process of the disparity estimation by utilising the disparity information acquired at time tn−1 to control the search range at time tn, where n is a positive integer.

As for the stereo matching at time t0, the parameter vector α=[α0,α1,α2]⊤ is first initialised as [0,0,0]⊤. Then, α is estimated by solving a least squares problem with a set of reliable correspondences P=[p0,p1,…,pn]⊤ and Q=[q0,q1,…,qn]⊤. In this paper, we use BRISK to detect and match P and Q. It allows a faster execution to achieve approximately the same number of correspondences as SURF (Speeded-Up Robust Features) and SIFT (Scale-Invariant Feature Transform) [23]. An example of keypoints detection and matching is shown in Fig. 3. The correspondences are then utilised to create a sparse v-disparity histogram as shown in Fig. 3. The values of α0, α1 and α2 can then be obtained by fitting a parabola to the non-zero candidates in the sparse v-disparity map. Since the outliers can severely affect the accuracy of the LSF, Random Sample Consensus (RANSAC) is utilised to iteratively update α until the ratio r=nI/(nO+nI) reaches a maximum value, where nI and nO represent the number of inliers and outliers, respectively. Then, the search range at row v is limited to [f(v)−τ,f(v)+τ], where τ is a threshold set to 3. The estimated disparity map at time t0 is shown in Fig. 4.

Afterwards, the disparity information acquired at time tn−1 (n>0) is utilised to create a dense v-disparity map. The latter is then optimised using Dynamic Programming (DP) and the optimum solution corresponds to the vertical road profile. More details are provided in subsection II-C. The optimum solution is then interpolated into a quadratic polynomial and the values of α0, α1 and α2 at time tn−1 can be obtained. The parameter vector α at time tn−1 is then used to control the search range at time tn according to the strategy mentioned above. The estimated disparity maps at time t1 and t38 are illustrated in Fig. 4 and Fig. 4, respectively.

The input image is always noisy, making various edge detectors such as Sobel and Canny very sensitive to the blobs [6]. Therefore, we first perform bilateral filtering on the input image to reduce redundant information while still preserving the edges. The filtered image is shown in Fig. 5.

As discussed in subsection II-C, the boundary between the road and sky v=vvp|min can be obtained by solving a quadratic function f(v)=0. Furthermore, the road area can be extracted by computing the difference between the actual and fitted disparity values, i.e., ~d and f(v), and then finding the pixels that meet the requirement of ~d(u,v)∈[max{0,f(v)−μ},f(v)+μ], where μ is a threshold set to remove the pixels on the obstacles [6].

In this subsection, we use Sobel operator to detect the edge information by convolving the horizontal and vertical Sobel operators with the original image [3]. The corresponding edge detection result is shown in Fig. 5.

DP is an optimisation method which aims at solving a complicated problem by breaking it down into a series of simpler sub-problems [6]. According to our previously published algorithm in [21], DP is performed to minimise the energy function in Eq. 1, where E represents the total energy and the path with the minimum E is selected as the optimum solution. Edata depends on the total votes each accumulator gets and Esmooth with a smoothness constant λ, penalises the changes in pvp.

pvp provides the tangential direction and the curvature information of lanes, which can help to validate the lane positions. In our previous paper [21], a likelihood function V(pe)=∇(pe)⋅cos(θpe−θpvp) is formed for each edge point pe and the plus-minus peak pairs are selected for lane visualisation, where θpe is the angle between the u-axis and the orientation of the edge point pe, and θpvp is the angle between the u-axis and the radial from an edge pixel pe to pvp(ve). More details are provided in [24, 21]. The lanes can thus be visualised using f(v), g(v) and V(pe). Some examples of lane detection results are shown in Fig. 7.

In this section, we use the KITTI dataset to quantify the robustness of the proposed algorithm. Some experimental results are shown in Fig. 7, where the green regions are the estimated road areas and the lines in red are the detected lanes.

Currently, it is impossible to access a satisfying ground truth dataset for the evaluation of lane detection algorithms because accepted test protocols do not usually exist [25]. Therefore, many publications related to lane detection only compare the quality of their experimental results with the ones obtained using some other published algorithms [21]. For this reason, we compare the performance of the proposed system with [21]. Table I and Table II details the successful detection rates of the proposed algorithm and the algorithm presented in [21], respectively. The overall successful detection rate is around 99% and it is increased by around 0.6%.

In addition, the proposed algorithm is implemented in C programming language. The runtime of the algorithm for a single frame with a resolution of 1242×375 is 0.21 seconds (using a single thread of Intel Core I7-8700K CPU). By controlling the search range at time tn using the disparity information acquired at time tn−1, the runtime of the disparity estimation is reduced by around 37%. Although the algorithm does not perform in real time, we believe that the execution speed of the implementation can be further accelerated by highly exploiting the parallel computing architecture.

This paper presented a multiple lane detection algorithm. The process of the disparity estimation is optimised by using the disparity information acquired at time tn to suggest the search range at time tn+1 (n≥0). This not only improved the accuracy of the estimated disparities but also reduced the runtime of the algorithm. The runtime of the disparity estimation is reduced by approximately 37%. The lanes were detected using our previously published algorithm in [21, 6]. The experimental results illustrated that the proposed system works robustly and precisely for both highway and urban scenes and a 99% successful detection rate was achieved when processing the KITTI dataset.

However, some actual road conditions may result in failed detections. Therefore, we plan to train a deep neural network for dense vanishing point estimation. Furthermore, we plan to implement the proposed algorithm on some state-of-the-art embedded systems, such as Jetson TX2 for real-time purposes.