One of the major reasons for misclassification of multiplex actions during action recognition is the unavailability of complementary features that provide the semantic information about the actions. In different domains these features are present with different scales and intensities. In existing literature, features are extracted independently in different domains, but the benefits from fusing these multidomain features are not realized. To address this challenge and to extract complete set of complementary information, in this paper, we propose a novel multidomain multimodal fusion framework that extracts complementary and distinct features from different domains of the input modality. We transform input inertial data into signal images, and then make the input modality multidomain and multimodal by transforming spatial domain information into frequency and time-spectrum domain using Discrete Fourier Transform (DFT) and Gabor wavelet transform (GWT) respectively. Features in different domains are extracted by Convolutional Neural networks (CNNs) and then fused by Canonical Correlation based Fusion (CCF) for improving the accuracy of human action recognition. Experimental results on three inertial datasets show the superiority of the proposed method when compared to the state-of-the-art. 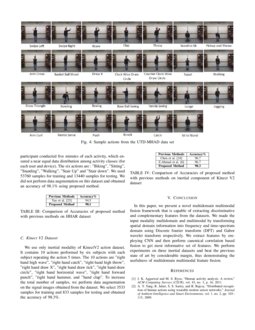 Human action recognition (HAR) is a dynamic field for the researchers working in the area of machine learning, computer vision and human computer interaction due to its increasing applications in daily life such as healthcare, sports and security

. Before the success of deep learning models, the traditional methods for HAR were dependent on hand crafted features where the feature extraction to classification was performed separately, and thus they did not leverage the advantages of end to end learning.

††© 2020 IEEE. Personal use of this material is permitted. Permission from IEEE must be obtained for all other uses, in any current or future media, including reprinting/republishing this material for advertising or promotional purposes, creating new collective works, for resale or redistribution to servers or lists, or reuse of any copyrighted component of this work in other works.

With the availability of smart phones and inertial wearable sensors at reasonable cost, the HAR using inertail data has gained significant attention. Inertail sensors provide data in the from of multivariate time series, at high sampling rate and their working is independent on the availability of light and thus there are no problems of view point variations, light intensities and cluttering as in case of vision based HAR [2].

Deep neural networks, since their revival, has gained significant attention due to their crowd pulling performance in various machine learning and computer vision applications [3] [4]. The capacity of deep learning models to learn complex features directly from the data is useful to recognize the less discriminative and complex human actions. Initially deep learning models for HAR were employed on single modalities and therefore they did not capture the complementary features necessary to recognize multiplex actions. To extract essential supportive information for classification of less distinct actions, many fusion frameworks have been proposed based on statistical and deep learning based methods [5] [6]. In these fusion frameworks, the complementary features are extracted only in spatial domain and thus they are uniscalar and monochromatic.

To address this shortcoming, in this paper, we propose CNN based multidomain multimodal fusion framework that extract features in spatial, frequency and time-frequency domain and hence provide multiscale and multichromatic complementary features in addition to discriminative features. These multidomain features are integrated using canonical correlation based fusion to improve the accuracy of action recognition. The key contributions of the proposed work are:

Many methods have been proposed in literature for action recognition from inertial sensors. Here, we focus particularly on methods that utilize frequency domain and wavelet features, which serves as the motivation behind the multidomain features we are fusing.

In [7], dual tree complex wavelet transform (DTCWT) is used to enhance the edge representation in the human action datasets which in turns improve the recognition accuracy of human actions. In [8] an improved algorithm based on Fast Fourier Transform (FFT) is proposed which extracts features from resultant acceleration of the data obtained from smartphones. Experiment shows that recognition accuracy is higher by selecting features in frequency domain. In [9], a robust and accurate system was developed by performing multimodal fusion of ECG and accelerometer data in temporal and cepstral domains for physical activity recognition. In [10], biologically inspired motion analysis system is developed using different scales and orientations of Gabor wavelets to form a dictionary regarding human recognition. The proposed system shows promising performance on KTH human action dataset. In [11]

[12] for silhouette based human action recognition. The fractional Fourier shape representation of human silhouette is more powerful than that in the time or frequency domain. Diffusion score is used to determine best fractional order. In [13], a frequency-based action descriptor called “FADE” is proposed to represent human actions. FFT is used to transform the signals into frequency domain and then these signals are resampled to exploit the frequency domain features. Finally Manhattan distance is used for measuring similarities between the actions. Experimental results show that the proposed method is computationally efficient. In  [14]

In general, an information fusion analysis task involves processing of multi-modal data in order to obtain valuable insights about the data, a situation, or a higher level activity. Examples of information fusion analysis tasks include semantic concept detection, human action recognition, human tracking, event detection, etc. Multimedia data used for these tasks could be sensory (such as inertial, depth, RFID) or non-sensory (such as WWW resources, database). The fusion of multiple modalities can provide complementary information and increase the accuracy of the overall decision making process.

In proposed method, we first transform input modality into images. Then, the input modality is converted to multidomain and multimodal by transforming spatial domain information into frequency and time-spectrum domain using Discrete Fourier transform (DFT) and Gabor wavelet transform, respectively. CNNs, whose architecture is shown in Fig. 3

, are employed to extract multidomain features from the modalities and then canonical correlation based fusion is applied at two stages to get the final set of features. These features are finally fed to the SVM classifier for recognition task. The complete overview of the proposed method is shown in Fig.

Before making input modality multidomain and multimodal, we transform input modality into signal images. The inertial sensors in our dataset are tri-axis accelerometer and gyroscopes, Thus, we have six sequences of signals. With the given six signal sequences, signal image is obtained through row-by-row stacking of raw signal sequences in such a way that each sequence comes in neighbor to every other sequence. Thus the width of our signal image becomes 24 according to the algorithm in [15]. To decide on the length of the signal image, we made use of sampling rate of datasets which is 50Hz. Therefore, after certain experiments and to capture gritty motion accurately, the length of the signal image is finalized as 52, resulting in a final image size of 24 x 52. The signal images are shown in Fig. 2.

The architecture of CNN used in proposed method is shown in Fig. 3

Where I(x,y) is the spatial domain image of size M×N.

σ modulated by a complex sinusoid with polar frequency (F,ω) and phase P described in equation 2.

Where K is the magnitude of Gaussian envelope.

Canonical correlation analysis is effective and robust multivariate statistical method for finding the relationship between two sets of variables.

The purpose of CCA is to find the linear combination X′=AX and Y′=BY such that the maximum pairwise correlation between the dataset could be achieved. Matrices A and B are called transformation matrices for X and Y respectively. The correlation between X′ and Y′ is given by

Lagrange’s Optimization method is used to maximize the covariance between X′ and Y′ subject to the constraint that the variance of X′ and variance of Y′ is equal to unity.

The transformation matrices A and B are finally obtained by solving eigen value problem [16].

are the eigen vectors and

∧2 is the diagonal matrix of eigen values or square of the canonical correlations. The number of nonzero eigen values in (5) satify the following condition.

A and B are the transformation matrices consist of sorted eigen vectors.

The covariance matrix for the transformed data can be written as

On the transformed feature vector, fusion can be performed either by summation or concatenation. Since we use summation, therefore the discriminant features obtained after fusion can be mathematically written as

Support Vector Machines (SVM) are supervised classifiers used in various machine learning, data mining and computer vision applications. [17]. In simplest form, the score function for SVM is the mapping of the input vector to the scores and is a simple matrix operation as shown in Equation 7.

Where x is the input vector, W is the weight determined by input vector and the number of classes and b

is the bias vector.

[18]. The more rigorous nature of classification of SVM makes it more suitable choice over softmax classifier.

We experiment on three publicly available inertial datasets for human action recognition. These datasets are : Inertial component of UTD Multimodal Human Action Dataset (UTD-MHAD) [19],”Heterogeneity Human Activity Recognition Dataset” (HHAR), [20] and the inertial component of Kinect V2 dataset [21]. We used subject specific setting for experiments on both datasets by randomly splitting 80% data into training and 20% data into testing samples. We ran the random split 20 times and report the average accuracy. We conduct our experiments on Matlab R2018b on a desktop computer with NVIDIA GTX-1070 GPU.

This dataset consists of 27 different actions performed by 8 subjects with each subject repeating actions 4 times. These actions are shown in Fig. 4. We only used inertial component of the dataset and convert inertial time series data into signal images. We only obtained 1722 signal images which are very less to train CNN. Thus to increase the number of samples we used data augmentation technique described in [6]. After augmentation we get 13776 samples of signal images. We used 11021 for training and 2755 for testing. We train CNN on signal images as shown in Fig. 3 for 70 epochs. We achieve accuracy of 95.8% using our proposed method.

This dataset consists of six actions and is collected through nine users. All users followed a scripted set of activities while carrying eight smartphones (2 instances of LG Nexus 4, Samsung Galaxy S+ and Samsung Galaxy S3 and S3 mini) and four smart watches (2 instances of LG G and Samsung Galaxy Gear). These smart phones and smart watches are worn by the participents at their waists and arms respectively. Each participant conducted five minutes of each activity, which ensured a near equal data distribution among activity classes (for each user and device). The six actions are : ”Biking”, ”Sitting”, ”Standing”, ”Walking”, ”Stair Up” and ”Stair down”. We used 53760 samples for training and 13440 samples for testing. We did not perform data augmentation on this dataset and obtained an accuracy of 98.1% using proposed method.

In this paper, we present a novel multidomain multimodal fusion framework that is capable of extracting discriminative and complementary features from the datasets. We made the input modality multidomain and multimodal by transforming spatial domain information into frequency and time-spectrum domain using Discrete fourier transform (DFT) and Gabor wavelet transform respectively. We extract features by employing CNN and then perform canonical correlation based fusion to get most informative set of features. We perform experiments on three inertial datasets and beat the previous state of art by considerable margin, thus demonstrating the usefulness of multidomain multimodal feature fusion.