This paper describes a new method for the multichannel interpolation of a discrete signal. It is shown that a bandlimited periodic signal f can be exactly reconstructed from finite samples of g_k (1≤ k≤ M) which are the responses of M linear systems with input f. The proposed interpolation can also be applied to approximate non-bandlimited periodic signals. Quantitative error analysis is provided to ensure its effectiveness for approximating non-bandlimited periodic signals and its Hilbert transform. Importantly, involving the fast Fourier transform (FFT) computational technique, bring high computational efficiency and reliability of the proposed algorithm. The superior performance of the proposed algorithm is demonstrated by several simulations. Additionally, the proposed interpolation is applied to the image scaling problem. The empirical studies show that the proposed method performs better than the other conventional image scaling methods. 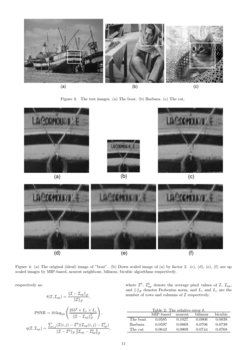 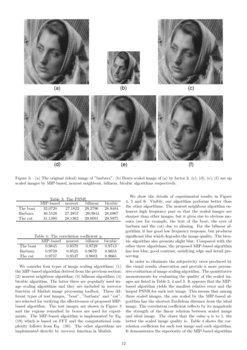 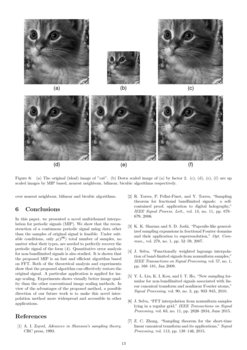 We design a two-dimensional signal constellation based on the exact peri...
Jan-Willem Goossens, et al. ∙

This paper deals with the kernel-based approximation of a multivariate p...
Vesa Kaarnioja, et al. ∙

Processing of large sets of stochastic signals: filtering based on piecewise interpolation technique

Lebesgue sampling is based on collecting information depending on the va...
Matthieu Bellucci, et al. ∙

In practical applications, one often has a number of data points, obtained by sampling or experimentation, which represent the values of a continuous signal. Interpolation by simple functions (e.g., trigonometric functions or rational functions), as one of the important mathematical techniques used in physics and engineering sciences, deals with the problem of reconstructing or approximating the continuous signals from a series of discrete points. An ideal interpolation usually tells us that a continuous signal can be exactly and uniquely reconstructed from the discrete points if it satisfies some suitable conditions (e.g., bandlimited). Such an interpolation is also referred to as a sampling theorem in signal processing [1]

Most of classical sampling formulas have centered around reconstructing a signal from its own samples [1, 6]. In fact, reconstructing a signal from data other than the samples of the original signal is possible. Papoulis [8] first proposed generalized sampling expansion (GSE) for bandlimited signals defined on real line R. The GSE indicates that a σ-bandlimited signal f can be reconstructed from the samples of output signals of M linear systems. That is, one can reconstruct f from the samples g1(nT),…,gM(nT) of the output signals

In this paper, a multichannel interpolation for periodic signals is studied. We derive a general interpolation formula that depends on the transfer functions of the linear systems. The formula bears a resemblance to the classical GSE defined on real line. Nevertheless, the recipe of derivation is different from the traditional one, and moreover, the proposed formula is given by a finite summation, as opposed to a infinite summation in the traditional case. The contributions of this paper are summarized as follows:

The rest of the paper is organized as follows: Section 2 recalls some preliminaries of Fourier series. Section 3 formulates MIP and presents some examples to illustrate how to use MIP flexibly. The error analysis is drawn in Section 4. In Section 5, the effectiveness of the proposed MIP for approximating signals is demonstrated by several numerical examples and the application of MIP to image scaling is also addressed. Finally, conclusions are made in Section 6.

This part recalls some preparatory knowledge of Fourier series (see e.g. [22]). Without loss of generality, we restrict attention to the 2π-periodic signals, or alternatively, we will consider the signals defined on unit circle T.

Let Lp(T) be the totality of functions such that

with ∑n∈Z|a(n)|2<∞, where the Fourier series is convergent to f in L2 norm. It is well known that L2(T) is a Hilbert space with the inner product

If f,h∈L2(T) and their Fourier coefficients are respectively given by

The analytic signal defined by the linear combination of original signal and its (circular) Hilbert transform is regarded as an useful representation from which the phase, energy and frequency may be estimated [23, 24]. The circular Hilbert transform [25, 26] for periodic signal f is given by

We will first concentrate on reconstruction problem of finite order trigonometric polynomials. To maintain consistent terminology with the classical case, in what follows, a finite order trigonometric polynomial is called a bandlimited signal. Specifically, a periodic signal f(t) is said to be bandlimited if its sequence of Fourier coefficients possesses finite nonzero elements. Let N=(N1,N2)∈Z2, in the sequel we denote by BN the totality of bandlimited signals with the following form:

It follows from (2) that

where cm(n)=a(n)bm(n). We particularly mention that the series (5) may not be convergent in general. Nevertheless, gm(t) is well defined when {cm(n)}∈l1. In this case, hm(t) may be regarded as a distribution.

The proposed MIP is to reconstruct f(t) from the samples of g1(t),g2(t),…,gM(t). To achieve this, it is naturally to expect that the simultaneous sampling of M signals will reduces sampling rate by 1/M. we shall note that the signal expressed as Eq. (4

) may be represented by a shorter length of summation as long as we introduce the following vectors.

Similar considerations applying to gm(t), we have

Owing to the periodicity of En(t), we easily obtain

for every 0≤p≤L−1. This leads to a simple expression for samples of gm(t), that is

where dm(n)=∑M−1k=0cm(n+kL). The factor ein2πpL gives us a hint that we may be able to express the samples of gm(t) in terms of the DFT matrix or its inverse matrix.

where FL is the L-th order DFT matrix

with ω=e−2πi/L and UL is a diagonal matrix

Hence we immediately obtain Eq. (8) which completes the proof.   □

Following the definition of An, for n∈I1, we further set M by M matrix

which means the jk element of Hn is bk(n+jL−L). Suppose that Hn is invertible for every n∈I1 and we denote the inverse matrix as

Next we use the elements of H−1n to construct the interpolation functions. Let

Proof. By the definition of ym and rearranging the summation terms of Eq. (13), we get

Until now, in addition to representing the sampled values of gm(t) by ˜Dm, the interpolation functions ym(t−tp) (1≤m≤M, 0≤p≤L−1) have been constructed from the elements of H−1n. we shall now make a connection between f(t) and ym(t−tp). To achieve this, let

By straightforward computations, we get

Having introduced above notations, we are in position to show our main result which is referred to multichannel interpolation for periodic signals (MIP).

Let f∈BN and gm, Hn be given above. If Hn is invertible for all n∈I1, then

The last equality is a consequence of Lemma 1 and 2. The proof is complete.   □

In general, Hn has to be invertible for every n∈I1 because the definition of vm,n(t) depends on qmk(n) (1≤k≤M) which are the elements of H−1n. However, if there is an index set Λ⊂I1 such that An=0 for every n∈Λ, then Hn is not necessary to be invertible for n∈Λ. This is due to the fact that the zero terms of (6) may be removed from the summation. In this case, we just need to set qmk(n)=0 (1≤m,k≤M) for n∈Λ.

Now we use some examples to show how Theorem 1 can be flexibly used to derive various sampling formulas for periodic signals. For simplicity we shall restrict to the case where N2=−N1=N.

is the N-th order Dirichlet kernel. This formula is referred to trigonometric interpolation for data f(tp) (p=0,1,…,2N). It should be stressed that the interpolation formulas given in [16, 17, 18] are mathematically equivalent to Eq. (20). Note that the expression (20) is not numerically stable at which the function takes 0/0 form. Based on the DFT, the author in [17] obtained a numerically stable formulation which is somehow equivalent to interpolation by the FFT [27]. In fact, the DFT or FFT based expressions for trigonometric interpolation can be subsumed in Eq. (19).

Theorem 1 permits us to express f∈BN from its samples and samples of its derivatives. Note that

Note that for bm(n)=(in)m−1 (1≤m≤M), the determinant of Hn defined by (11) is a Vandermonde determinant. Therefore Hn is invertible for all n∈I1. This would imply that we can further derive a sampling formula for recovering f from its samples as well as the samples of its first M−1 derivatives.

and the sampling formula

Note that Hf(t)=∑n≠0(−isgn(n))aneint satisfies the preconditions for establishment of Eq. (21) inherently. By substituting f with Hf in (21) and using (3), we conclude that the Hilbert transform of f∈BN can be computed by

The analytic signal associated with f is defined by fA(t)=f(t)+iHf(t), it can be rewritten as

Moreover, if f is real-valued, then

It is clear that