We formalize the problem of multi-agent path finding with deadlines (MAPF-DL). The objective is to maximize the number of agents that can reach their given goal vertices from their given start vertices within a given deadline, without colliding with each other. We first show that the MAPF-DL problem is NP-hard to solve optimally. We then present an optimal MAPF-DL algorithm based on a reduction of the MAPF-DL problem to a flow problem and a subsequent compact integer linear programming formulation of the resulting reduced abstracted multi-commodity flow network. 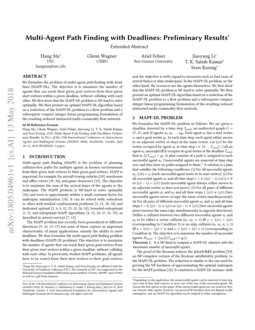 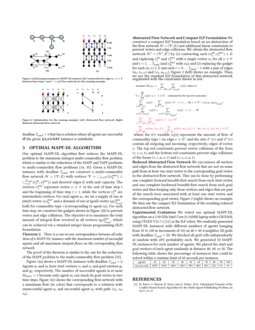 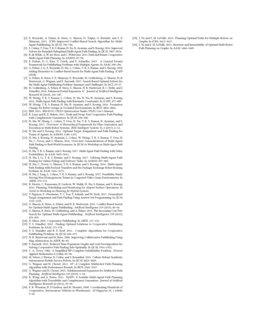 The MAPF problem has recently been generalized in different directions Ma and Koenig (2016); Hönig et al. (2016a); Ma et al. (2016); Hönig et al. (2016b); Ma et al. (2017a, b); Ma et al. (2017) but none of them capture an important characteristic of many applications, namely the ability to meet deadlines. We thus formalize the multi-agent path finding problem with deadlines (MAPF-DL problem). The objective is to maximize the number of agents that can reach their given goal vertices from their given start vertices within a given deadline, without colliding with each other. In previously studied MAPF problems, all agents have to be routed from their start vertices to their goal vertices, and the objective is with regard to resources such as fuel (sum of arrival times) or time (makespan). In the MAPF-DL problem, on the other hand, the resources are the agents themselves. We first show that the MAPF-DL problem is NP-hard to solve optimally. We then present an optimal MAPF-DL algorithm based on a reduction of the MAPF-DL problem to a flow problem and a subsequent compact integer linear programming formulation of the resulting reduced abstracted multi-commodity flow network.

It is NP-hard to compute a MAPF-DL solution with the maximum number of successful agents.

The proof of the theorem reduces the ≤3,=3-SAT problem Tovey (1984), an NP-complete version of the Boolean satisfiability problem, to the MAPF-DL problem. The reduction is similar to the one used for proving the NP-hardness of approximating the optimal makespan for the MAPF problem Ma et al. (2016). It constructs a MAPF-DL instance with deadline Tend=3 that has a solution where all agents are successful iff the given ≤3,=3-SAT instance is satisfiable.

Our optimal MAPF-DL algorithm first reduces the MAPF-DL problem to the maximum (integer) multi-commodity flow problem, which is similar to the reductions of the MAPF and TAPF problems to multi-commodity flow problems Yu and LaValle (2013a); Ma and Koenig (2016): Given a MAPF-DL instance with deadline Tend, we construct a multi-commodity flow network N=(V,E) with vertices V=⋃v∈V({vout0}∪⋃Tendt=1{vint,voutt}) and directed edges E with unit capacity. The vertices voutt represent vertex v∈V at the end of time step t and the beginning of time step t+1, while the vertices vint are intermediate vertices. For each agent ai, we set a supply of one at (start) vertex (si)out0 and a demand of one at (goal) vertex (gi)outTend, both for commodity type i (corresponding to agent ai). For each time step, we construct the gadgets shown in Figure 1(b) to prevent vertex and edge collisions. The objective is to maximize the total amount of integral flow received in all vertices (gi)outTend, which can be achieved via a standard integer linear programming (ILP) formulation.

There is a one-to-one correspondence between all solutions of a MAPF-DL instance with the maximum number of successful agents and all maximum integral flows on the corresponding flow network.

The proof of the theorem is similar to the one for the reduction of the MAPF problem to the multi-commodity flow problem Yu and LaValle (2013a).

Figure 1(a) shows a MAPF-DL instance with deadline Tend=2. Agents a1 and a2 have start vertices s1 and s2 and goal vertices g1 and g2, respectively. The number of successful agents is at most Msucc=1 because only agent a2 can reach its goal vertex in two time steps. Figure 1(c) shows the corresponding flow network with a maximum flow (in color) that corresponds to a solution with unsuccessful agent a1 and successful agent a2 with path ⟨v2, v4, v4⟩.

Abstracted Flow Network and Compact ILP Formulation We construct a compact ILP formulation based on an abstraction of the flow network N=(V,E) and additional linear constraints to prevent vertex and edge collisions. We obtain the abstracted flow network N′=(V′,E′) by (1) contracting each (vint,voutt)∈E and replacing vint and voutt with a single vertex vt for all v∈V and t=1…Tend (and vout0 with v0); and (2) replacing the gadget for each (u,v)∈E and each t=0…Tend−1 with a pair of edges (ut,vt+1) and (vt,ut+1). Figure 2 (left) shows an example. Then, we use the standard ILP formulation of this abstracted network augmented with the constraints shown in red:

where the 0/1 variable xi[e] represents the amount of flow of commodity type i on edge e∈E′ and the sets δ−(v) and δ+(v) contain all outgoing and incoming, respectively, edges of vertex v. The top red constraints prevent vertex collisions of the form (∗,∗,v,t), and the bottom red constraints prevent edge collisions of the forms (∗,∗,u,v,t) and (∗,∗,v,u,t).

Experimental Evaluation We tested our optimal MAPF-DL algorithm on a 2.50 GHz Intel Core i5-2450M laptop with 6 GB RAM, using CPLEX V12.7.1 IBM (2011) as the ILP solver. We randomly generated MAPF-DL instances with different numbers of agents (ranging from 10 to 100 in increments of 10) on 40×40 4-neighbor 2D grids with deadline Tend=

50. We blocked all grid cells independently at random with 20% probability each. We generated 50 MAPF-DL instances for each number of agents. We placed the start and goal vertices of each agent randomly at distance 48, 49, or 50. The following table shows the percentage of instances that could be solved within a runtime limit of 60 seconds per instance.