More on zeros and approximation of the Ising partition function 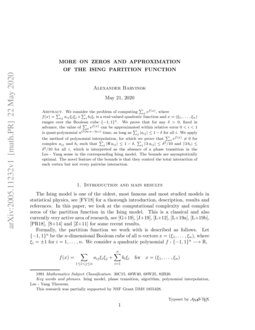 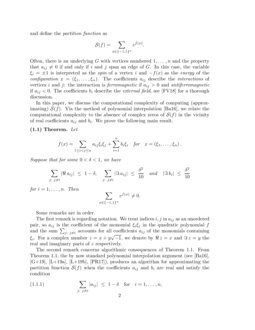 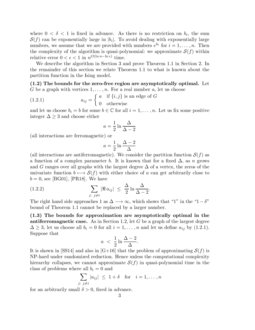 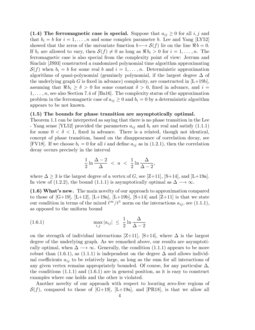 Smoothed counting of 0-1 points in polyhedra

Isoperimetric Inequalities for Real-Valued Functions with Applications to Monotonicity Testing

Searching for dense subsets in a graph via the partition function

The Ising model is one of the oldest, most famous and most studied models in statistical physics, see [FV18] for a thorough introduction, description, results and references. In this paper, we look at the computational complexity and complex zeros of the partition function in the Ising model. This is a classical and also currently very active area of research, see [G+19], [J+19], [L+12], [L+19a], [L+19b], [PR18], [S+14] and [Z+11] for some recent results.

Formally, the partition function we work with is described as follows. Let {−1,1}n be the n-dimensional Boolean cube of all n

and define the partition function as

Often, there is an underlying G with vertices numbered 1,…,n and the property that aij≠0 if and only if i and j span an edge of G. In this case, the variable ξi=±1 is interpreted as the spin of a vertex i and −f(x) as the energy of the configuration x=(ξ1,…,ξn). The coefficients aij describe the interactions of vertices i and j: the interaction is ferromagnetic if aij>0 and antiferromagnetic if aij<0. The coefficients bi describe the external field, see [FV18] for a thorough discussion.

Some remarks are in order.

The first remark is regarding notation. We treat indices i,j in aij as an unordered pair, so aij is the coefficient of the monomial ξiξj in the quadratic polynomial f and the sum ∑j: j≠i accounts for all coefficients aij of the monomials containing ξi. For a complex number z=x+y√−1, we denote by Rz=x and Iz=y the real and imaginary parts of z respectively.

The second remark concerns algorithmic consequences of Theorem 1.1. From Theorem 1.1, the by now standard polynomial interpolation argument (see [Ba16], [G+19], [L+19a], [L+19b], [PR17]), produces an algorithm for approximating the partition function \CalS(f) when the coefficients aij and bi are real and satisfy the condition

where 0<δ<1 is fixed in advance. As there is no restriction on bi, the sum \CalS(f) can be exponentially large in |bi|. To avoid dealing with exponentially large numbers, we assume that we are provided with numbers ebi for i=1,…,n. Then the complexity of the algorithm is quasi-polynomial: we approximate \CalS(f) within relative error 0<ϵ<1 in nO(lnn−lnϵ) time.

We describe the algorithm in Section 3 and prove Theorem 1.1 in Section 2. In the remainder of this section we relate Theorem 1.1 to what is known about the partition function in the Ising model.

(1.2) The bounds for the zero-free region are asymptotically optimal

Let G be a graph with vertices 1,…,n. For a real number a, let us choose

and let us choose bi=b for some b∈C for all i=1,…,n. Let us fix some positive integer Δ≥3 and choose either

(all interactions are ferromagnetic) or

(all interactions are antiferromagnetic). We consider the partition function \CalS(f) as a function of a complex parameter b. It is known that for a fixed Δ, as n grows and G ranges over all graphs with the largest degree Δ of a vertex, the zeros of the univariate function b⟼\CalS(f) with either choice of a can get arbitrarily close to b=0, see [BG01], [PR18]. We have

The right hand side approaches 1 as Δ⟶∞, which shows that “1” in the “1−δ” bound of Theorem 1.1 cannot be replaced by a larger number.

(1.3) The bounds for approximation are asymptotically optimal in the antiferromagnetic case

It is shown in [SS14] and also in [G+16] that the problem of approximating \CalS(f) is NP-hard under randomized reduction. Hence unless the computational complexity hierarchy collapses, we cannot approximate \CalS(f) in quasi-polynomial time in the class of problems where all bi=0 and

for an arbitrarily small δ>0, fixed in advance.

(1.4) The ferromagnetic case is special

Suppose that aij≥0 for all i,j and that bi=b for i=1,…,n and some complex parameter b. Lee and Yang [LY52] showed that the zeros of the univariate function b⟼\CalS(f) lie on the line Rb=0. If bi are allowed to vary, then \CalS(f)≠0 as long as Rbi>0 for i=1,…,n. The ferromagnetic case is also special from the complexity point of view: Jerrum and Sinclair [JS93] constructed a randomized polynomial time algorithm approximating \CalS(f) when bi=b for some real b and i=1,…,n. Deterministic approximation algorithms of quasi-polynomial (genuinely polynomial, if the largest degree Δ of the underlying graph G is fixed in advance) complexity, are constructed in [L+19b], assuming that Rbi≥δ>0 for some constant δ>0, fixed in advance, and i=1,…,n, see also Section 7.4 of [Ba16]. The complexity status of the approximation problem in the ferromagnetic case of aij≥0 and bi=0 by a deterministic algorithm appears to be not known.

(1.5) The bounds for phase transition are asymptotically optimal

Theorem 1.1 can be interpreted as saying that there is no phase transition in the Lee - Yang sense [YL52] provided the parameters aij and bi are real and satisfy (1.1.1) for some 0<δ<1, fixed in advance. There is a related, though not identical, concept of phase transition, based on the disappearance of correlation decay, see [FV18]. If we choose bi=0 for all i and define aij as in (1.2.1), then the correlation decay occurs precisely in the interval

on the strength of individual interactions [Z+11], [S+14], where Δ is the largest degree of the underlying graph. As we remarked above, our results are asymptotically optimal, when Δ⟶∞. Generally, the condition (1.1.1) appears to be more robust than (1.6.1), as (1.1.1) is independent on the degree Δ and allows individual coefficients aij to be relatively large, as long as the sum for all interactions of any given vertex remains appropriately bounded. Of course, for any particular Δ, the conditions (1.1.1) and (1.6.1) are in general position, as it is easy to construct examples where one holds and the other is violated.

Another novelty of our approach with respect to locating zero-free regions of \CalS(f), compared to those of [G+19], [L+19a], and [PR18], is that we allow all parameters aij and bi to vary: this concerns both Lee - Yang zeros [LY52], [PR18] of \CalS(f) as a function of bi with fixed aij and the Fisher zeros [L+19a] of \CalS(f) as a function of aij with bi fixed. It appears that Theorem 1.1 is the first result establishing an asymptotically optimal zero-free region when the interactions aij are allowed to differ for different pairs {i,j} and even to be of different signs, so that we have a mixture of ferromagnetic and antiferromagnetic interactions.

on the Boolean cube, some (apparently non-optimal) estimates can be found in

We will use the following straightforward identity. Let F be a face of {−1,1}n of dimension at least 1. Let i be a free index of F and let F+⊂F and F−⊂F be the faces obtained by fixing the i-th coordinate ξi of vectors x∈F to 1 and −1 respectively. Then

In what follows, we view non-zero complex numbers z∈C∖{0} as vectors in the plane R2=C and measure angles between them.

We start with a simple geometric lemma.

Let v+, v− and v be the orthogonal projections of w+, w− and w respectively onto the bisector of the angle between w+ and w−. Then

and the proof of Part 1 follows.

is real and the angle between u+ and u− does not exceed θ. Let

Without loss of generality, we may assume that 0<α,β<π/2 and hence α+β≤θ. Let

Since the function x⟼1/sin(x) is convex on the interval 0<x<π/2, the minimum value of

and the set \CalU(b;δ) is simply connected, we can choose a branch of the function f⟼ln\CalS(ef|F) for f∈\CalU(b;δ).

Let us fix two indices 1≤p<q≤n, at most one of which is free for F. Then

Suppose first that neither of the indices p and q is free. Then the value of ξpξq is constant for all x∈F and hence

from which the proof follows.

Suppose now that only one of the indices p and q, say q, is free. Let F+⊂F and F−⊂F be the faces obtained by setting the q-th coordinate ξq=1 and ξq=−1 respectively. Applying (2.1.1), we get

and the angle between w+≠0 and w−≠0 does not exceed θ by the assumption of the lemma. Applying Part 1 of Lemma 2.2, we get

Applying Part 2 of Lemma 2.2, we conclude that

Indeed, we can just choose θ=δ/2. Using that

We prove by induction for k=0,…,n the following statement.

This concludes the proof of the induction step and hence of Theorem 1.1. ∎

and some 0<δ<1, fixed in advance (there are no restrictions on bi). Here we sketch an algorithm for approximating

by the method of polynomial interpolation. Without loss of generality, we assume that δ≤0.1 and that n is large enough,

since for smaller n the sum can be computed by brute force.

First, we rewrite \CalS(f) as a polynomial in some new variables. We have

For given b1,…,bn, we consider a polynomial

and we want to approximate Pb(cij).

Next, for given cij and bi, we consider a univariate polynomial

of a complex variable z. Our goal is to approximate p(1).

Our next goal is to show that

where we choose the principal branch of the logarithm, so that ˆaij(0)=0. Let