MMOCR: A Comprehensive Toolbox for Text Detection, Recognition and Understanding

We present MMOCR-an open-source toolbox which provides a comprehensive pipeline for text detection and recognition, as well as their downstream tasks such as named entity recognition and key information extraction. MMOCR implements 14 state-of-the-art algorithms, which is significantly more than all the existing open-source OCR projects we are aware of to date. To facilitate future research and industrial applications of text recognition-related problems, we also provide a large number of trained models and detailed benchmarks to give insights into the performance of text detection, recognition and understanding. MMOCR is publicly released at https://github.com/open-mmlab/mmocr. 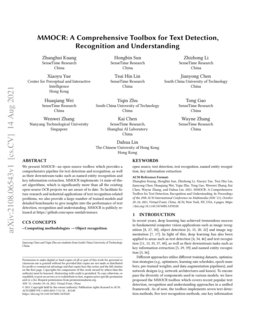 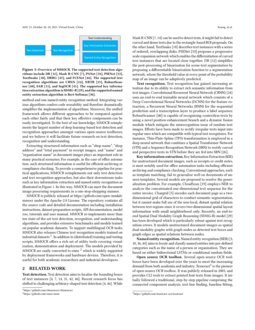 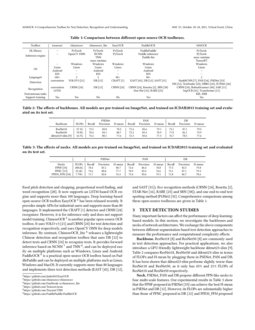 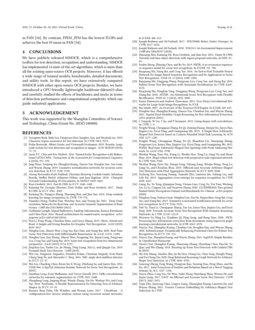 DeepKE: A Deep Learning Based Knowledge Extraction Toolkit for Knowledge Base Population

GisPy: A Tool for Measuring Gist Inference Score in Text

e.g. network architectures and losses). To encompass the diversity of components used in various models, we have proposed the MMOCR toolbox which covers recent popular text detection, recognition and understanding approaches in a unified framework. As of now, the toolbox implements seven text detection methods, five text recognition methods, one key information method and one named entity recognition method. Integrating various algorithms confers code reusability and therefore dramatically simplifies the implementation of algorithms. Moreover, the unified framework allows different approaches to be compared against each other fairly and that their key effective components can be easily investigated. To the best of our knowledge, MMOCR reimplements the largest number of deep learning-based text detection and recognition approaches amongst various open-source toolboxes, and we believe it will facilitate future research on text detection, recognition and understanding.

Extracting structured information such as “shop name”, “shop address” and “total payment” in receipt images, and “name” and “organization name” in document images plays an important role in many practical scenarios. For example, in the case of office automation, such structured information is useful for efficient archiving or compliance checking. To provide a comprehensive pipeline for practical applications, MMOCR reimplements not only text detection and text recognition approaches, but also their downstream tasks such as key information extraction and named entity recognition as illustrated in Figure 1. In this way, MMOCR can meet the document image processing requirements in a one-stop-shopping manner.

simplifies the post-processing of binarization for scene-text segmentation by proposing a differentiable binarization function to a segmentation network, where the threshold value at every point of the probability map of an image can be adaptively predicted.

uses an end-to-end trainable neural network which consists of a Deep Convolutional Neural Networks (DCNN) for the feature extraction, a Recurrent Neural Networks (RNN) for the sequential prediction and a transcription layer to produce a label sequence. RobustScanner

is capable of recognizing contextless texts by using a novel position enhancement branch and a dynamic fusion module which mitigate the misrecognition issue of random text images. Efforts have been made to rectify irregular texts input into regular ones which are compatible with typical text recognizers. For instance, Thin-Plate-Spline (TPS) transformation is employed in a deep neural network that combines a Spatial Transformer Network (STN) and a Sequence Recognition Network (SRN) to rectify curved and perspective texts in STN before they are fed into SRN

Key information extraction. Key Information Extraction (KIE) for unstructured document images, such as receipts or credit notes, is most notably used for office automation tasks including efficient archiving and compliance checking. Conventional approaches, such as template matching, fail to generalize well on documents of unseen templates. Several models are proposed to resolve the generalization problem. For example, CloudScan (Palm et al., 2017) employs NER to analyze the concatenated one-dimensional text sequence for the entire invoice. Chargrid (Faddoul et al., 2018) encodes each document page as a two-dimensional grid of characters to conduct semantic segmentation, but it cannot make full use of the non-local, distant spatial relation between text regions since it covers two-dimensional spatial layout information with small neighborhood only. Recently, an end-to-end Spatial Dual Modality Graph Reasoning (SDMG-R) model (Sun et al., 2021) has been developed which is particularly robust against text recognition errors. It models unstructured document images as spatial dual-modality graphs with graph nodes as detected text boxes and graph edges as spatial relations between nodes.

aims to locate and classify named entities into pre-defined categories such as the name of a person or organization. They are based on either bidirectional LSTMs or conditional random fields.

Many important factors can affect the performance of deep learning-based models. In this section, we investigate the backbones and necks of network architectures. We exchange the above components between different segmentation-based text detection approaches to measure the performance and computational complexity effects.

We have publicly released MMOCR, which is a comprehensive toolbox for text detection, recognition and understanding. MMOCR has implemented 14 state-of-the-art algorithms, which is more than all the existing open-source OCR projects. Moreover, it has offered a wide range of trained models, benchmarks, detailed documents, and utility tools. In this report, we have extensively compared MMOCR with other open-source OCR projects. Besides, we have introduced a GPU-friendly lightweight backbone-ddrnet23-slim, and carefully studied the effects of backbones and necks in terms of detection performance and computational complexity which can guide industrial applications.

This work was supported by the Shanghai Committee of Science and Technology, China (Grant No. 20DZ1100800).