Feature attribution methods, or saliency maps, are one of the most popular approaches for explaining the decisions of complex machine learning models such as deep neural networks. In this study, we propose a stochastic optimization approach for the perturbation-based feature attribution method. While the original optimization problem of the perturbation-based feature attribution is difficult to solve because of the complex constraints, we propose to reformulate the problem as the maximization of a differentiable function, which can be solved using gradient-based algorithms. In particular, stochastic optimization is well-suited for the proposed reformulation, and we can solve the problem using popular algorithms such as SGD, RMSProp, and Adam. The experiment on the image classification with VGG16 shows that the proposed method could identify relevant parts of the images effectively. 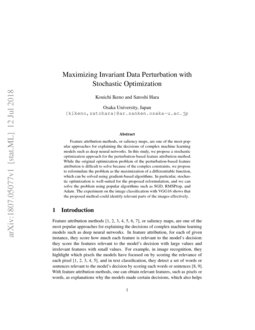 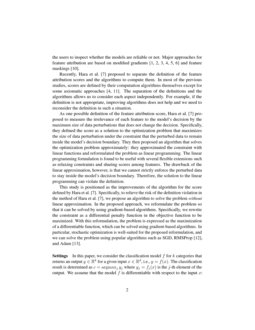 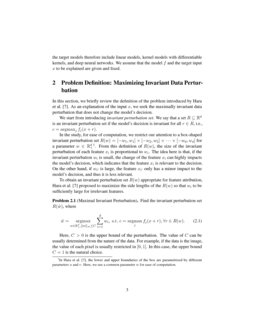 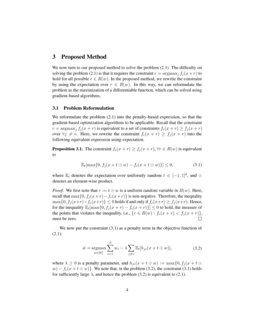 Feature attribution methods [1, 2, 3, 4, 5, 6, 7], or saliency maps, are one of the most popular approaches for explaining the decisions of complex machine learning models such as deep neural networks. In feature attribution, for each of given instance, they score how much each feature is relevant to the model’s decision: they score the features relevant to the model’s decision with large values and irrelevant features with small values. For example, in image recognition, they highlight which pixels the models have focused on by scoring the relevance of each pixel [1, 2, 3, 4, 5], and in text classification, they detect a set of words or sentences relevant to the model’s decision by scoring each words or sentences [8, 9]. With feature attribution methods, one can obtain relevant features, such as pixels or words, as explanations why the models made certain decisions, which also helps the users to inspect whether the models are reliable or not. Major approaches for feature attribution are based on modified gradients [1, 2, 3, 4, 5, 6] and feature maskings [10].

As one possible definition of the feature attribution score, Hara et al. [7]

proposed to measure the irrelevance of each feature to the model’s decision by the maximum size of data perturbations that does not change the decision. Specifically, they defined the score as a solution to the optimization problem that maximizes the size of data perturbation under the constraint that the perturbed data to remain inside the model’s decision boundary. They then proposed an algorithm that solves the optimization problem approximately: they approximated the constraint with linear functions and reformulated the problem as linear programming. The linear programming formulation is found to be useful with several flexible extensions such as relaxing constraints and sharing scores among features. The drawback of the linear approximation, however, is that we cannot strictly enforce the perturbed data to stay inside the model’s decision boundary. Therefore, the solution to the linear programming can violate the definition.

This study is positioned as the improvements of the algorithm for the score defined by Hara et al. [7]. Specifically, to relieve the risk of the definition violation in the method of Hara et al. [7], we propose an algorithm to solve the problem without linear approximation. In the proposed approach, we reformulate the problem so that it can be solved by using gradient-based algorithms. Specifically, we rewrite the constraint as a differential penalty function in the objective function to be maximized. With this reformulation, the problem is expressed as the maximization of a differentiable function, which can be solved using gradient-based algorithms. In particular, stochastic optimization is well-suited for the proposed reformulation, and we can solve the problem using popular algorithms such as SGD, RMSProp [12], and Adam [13].

In this paper, we consider the classification model f for k categories that returns an output y∈Rk for a given input x∈Rd, i.e., y=f(x). The classification result is determined as c=argmaxjyj where yj=fj(x) is the j-th element of the output. We assume that the model f is differentiable with respect to the input x: the target models therefore include linear models, kernel models with differentiable kernels, and deep neural networks. We assume that the model f and the target input x to be explained are given and fixed.

In this section, we briefly review the definition of the problem introduced by Hara et al. [7]. As an explanation of the input x, we seek the maximally invariant data perturbation that does not change the model’s decision.

In the study, for ease of computation, we restrict our attention to a box-shaped invariant perturbation set R(w)=[−w1,w1]×[−w2,w2]×⋯×[−wd,wd] for a parameter w∈Rd+111In Hara et al. [7], the lower and upper boundaries of the box are parametrized by different parameters u and v. Here, we use a common parameter w for ease of computation.. From this definition of R(w), the size of the invariant perturbation of each feature xi is proportional to wi. The idea here is that, if the invariant perturbation wi is small, the change of the feature xi can highly impacts the model’s decision, which indicates that the feature xi is relevant to the decision. On the other hand, if wi′ is large, the feature xi′ only has a minor impact to the model’s decision, and thus it is less relevant.

To obtain an invariant perturbation set R(w) appropriate for feature attribution, Hara et al. [7] proposed to maximize the side lengths of the R(w) so that wi to be sufficiently large for irrelevant features.

Here, C>0 is the upper bound of the perturbation. The value of C can be usually determined from the nature of the data. For example, if the data is the image, the value of each pixel is usually restricted in [0,1]. In this case, the upper bound C=1 is the natural choice.

The constraint fc(x+r)≥fj(x+r),∀r∈R(w) is equivalent to

where Et denotes the expectation over uniformly random t∈[−1,1]d, and ⊙ denotes an element-wise product.

We first note that r:=t⊙w

is a uniform random variable in

Thanks to the formulation (3.2), it is differentiable with respect to the parameter w. Hence, we can apply the gradient-based optimization methods. Here, we note that stochastic optimization algorithms, such as SGD, RMSProp [12], and Adam [13], are particularity suited for the problem. In each iteration of the algorithm, we randomly generate perturbations {tm:tm∼Uniform([−1,1]d)}Mm=1, and approximate the objective function using the sample average:

The psuedo code of the stochastic optimization is shown in Algorithm 1. The line 6 is added in the algorithm so that the parameter w to stay between the lower bound zero and the upper bound C.

In the experiment, we followed the setup used in Hara et al. [7]. As the target model f to be explained, we adopted the pre-trained VGG16 [14]

distributed at the Tensorflow repository. As the target data

x to be explained, we used COCO-animal dataset222cs231n.stanford.edu/coco-animals.zip. Specifically, for the experiment, we used 200 images in the validation set.

As the baseline methods, we used Gradient [1], GuidedBP [2], SmoothGrad [5], IntGrad [4], LRP [3], DeepLIFT [6], Occlusion, and the LP-based methods (LP and LP(Smooth)) [7]. Gradient, GuidedBP, SmoothGrad and IntGrad are implemented using saliency444https://github.com/PAIR-code/saliency with default settings, and LRP, DeepLIFT, and Occlusion are implemented using DeepExplain555https://github.com/marcoancona/DeepExplain where we set the mask size for Occlusion as (12,12,3). For the LP-based methods, we used the same setting as the ones used in Hara et al. [7] (δ=0.1 and λ≈0.5). We note that, all the methods including the proposed method return the scores of size (224,224,3).

We conducted the experiment as follows.

We varied the threshold quantile from τ=0 (no flip) to τ=100 (all filp), and summarized the result in Figure 1

2.1). By contrast, the proposed method solves the problem without approximation. Hence, the derived solution is more accurate than the ones of the LP-based methods.

Figures 2, 3, and 4 show examples of the computed scores with each feature attirbution method. The figures clearly show that the proposed method attained a very high S/N ratios compared to the existing method where the scores tend to be noisy. We conjecture that this was because the proposed method could provide high quality solutions to the problem (2.1) without linear approximation.

In this study, as a novel feature attribution method, we proposed a stochastic optimization method for finding maximally invariant data perturbation. In the proposed approach, we reformulated the problem as the maximization of a differentiable function, which can be solved using gradient-based algorithms. In particular, stochastic optimization is well-suited for the proposed reformulation, and we can solve the problem using popular algorithms such as SGD, RMSProp, and Adam. The experimental result on the image classification with VGG16 shows that the proposed method could identify relevant parts of the images effectively.

This work was supported by JSPS KAKENHI Grant Number JP18K18106.