We mainly study the M-estimation method for the high-dimensional linear regression model, and discuss the properties of M-estimator when the penalty term is the local linear approximation. In fact, M-estimation method is a framework, which covers the methods of the least absolute deviation, the quantile regression, least squares regression and Huber regression. We show that the proposed estimator possesses the good properties by applying certain assumptions. In the part of numerical simulation, we select the appropriate algorithm to show the good robustness of this method 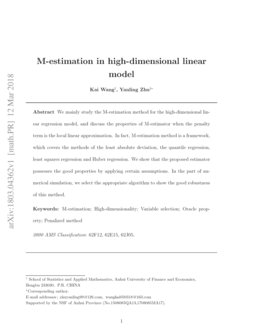 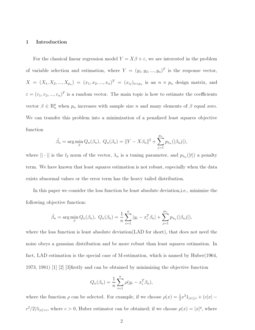 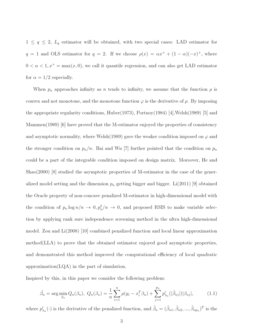 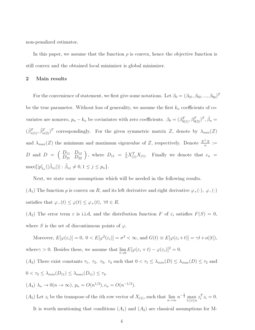 For the classical linear regression model Y=Xβ+ε, we are interested in the problem of variable selection and estimation, where Y=(y1,y2,...,yn)T

is the response vector,

X=(X1,X2,...,Xpn)=(x1,x2,...,xn)T=(xij)n×pn is an n×pn design matrix, and ε=(ε1,ε2,...,εn)T is a random vector. The main topic is how to estimate the coefficients vector β∈Rpn when pn increases with sample size n and many elements of β equal zero. We can transfer this problem into a minimization of a penalized least squares objective function

where ||⋅|| is the l2 norm of the vector, λn is a tuning parameter, and pλn(|t|) a penalty term. We have known that least squares estimation is not robust, especially when the data exists abnormal values or the error term has the heavy tailed distribution.

In this paper we consider the loss function be least absolute deviation,i.e., minimize the following objective function:

where the loss function is least absolute deviation(LAD for short), that does not need the noise obeys a gaussian distribution and be more robust than least squares estimation. In fact, LAD estimation is the special case of M-estimation, which is named by Huber(1964, 1973, 1981)

When pn approaches infinity as n tends to infinity, we assume that the function ρ is convex and not monotone, and the monotone function φ is the derivative of ρ. By imposing the appropriate regularity conditions, Huber(1973), Portnoy(1984)[4],Welsh(1989)[5] and Mammen(1989)[6] have proved that the M-estimator enjoyed the properties of consistency and asymptotic normality, where Welsh(1989) gave the weaker condition imposed on φ and the stronger condition on pn/n. Bai and Wu [7] further pointed that the condition on pn could be a part of the integrable condition imposed on design matrix. Moreover, He and Shao(2000)[8] studied the asymptotic properties of M-estimator in the case of the generalized model setting and the dimension pn getting bigger and bigger. Li(2011)[9] obtained the Oracle property of non-concave penalized M-estimator in high-dimensional model with the condition of pnlogn/n→0,p2n/n→0, and proposed RSIS to make variable selection by applying rank sure independence screening method in the ultra high-dimensional model. Zou and Li(2008)[10] combined penalized function and local linear approximation method(LLA) to prove that the obtained estimator enjoyed good asymptotic properties, and demonstrated this method improved the computational efficiency of local quadratic approximation(LQA) in the part of simulation. Inspired by this, in this paper we consider the following problem:

where p′λn(⋅) is the derivative of the penalized function, and ~βn=(~βn1,~βn2,...,~βnpn)T is the non-penalized estimator.

In this paper, we assume that the function ρ is convex, hence the objective function is still convex and the obtained local minimizer is global minimizer.

For the convenience of statement, we first give some notations. Let β0=(β01,β02,...,β0p)T be the true parameter. Without loss of generality, we assume the first kn coefficients of covariates are nonzero, pn−kn be coviariates with zero coefficients. β0=(βT0(1),βT0(2))T,^βn=(^βTn(1),^βTn(2))T correspondingly. For the given symmetric matrix Z, denote by λmin(Z) and λmax(Z)

the minimum and maximum eigenvalue of

Next, we state some assumptions which will be needed in the following results. (A1) The function ρ is convex on R, and its left derivative and right derivative φ+(⋅), φ−(⋅) satisfies that φ−(t)≤φ(t)≤φ+(t), ∀t∈R. (A2) The error term ε is i.i.d, and the distribution function F of εi satisfies F(S)=0, where S is the set of discontinuous points of φ.

It is worth mentioning that conditions (A1) and (A2) are classical assumptions for M-estimation in linear model, which can be found in many references, for example Bai, Rao and Wu(1992)[11]and Wu(2007)[12]. The condition (A3) is frequently used for sparse model in the linear model regression theory, which requires that the eigenvalues of the matrices D and D11 are bounded. The condition (A4) is weaker than that in previous references. In the condition (A4) we broad the order of pn to n1/2, but in the references Huber(1973) and Li,Peng and Zhu(2011)[9] they required that p2n/n→0, Portnoy(1984) required pnlogpn/n→0, and Mammen(1989) required p3/2nlogpn/n→0. Compared with these results, it is obvious that our sparse condition is much weaker. The condition (A5) is the same as that in Huang, Horowitz and Ma(2008)[13], which is used to prove the asymptotic properties of the nonzero part of M-estimation.

Remark 2.1 From Theorem 2.1, we can obtain that there exists a global M-estimation ^βn if we choose the appropriate tuning parameter λn, moreover this M-estimation is (n/pn)1/2-consistent. This convergence rate is the same as that in the references Huber(1973) and Li,Peng and Zhu(2011).

By Theorem 3.2, we can get that under the suitable conditions the global M-estimation of zero-coefficient variables goes to zero with a high probability when

n is large enough. This also shows that the model is sparse.

where s2n=σ2γ−1uTD−111u, and u is any kn dimensional vector such that ∥u∥≤1. Meanwhile, zi is the transpose of the ith row vector of a kn×kn matrix X(1).

The proof of Theorem 2.1: Let αn=(pn/n)1/2+p1/2ncn, where u is a any pn-dimensional vector such that ∥u∥=C. In the following part we only need to prove that there exists a great enough positive constant C such that

for any ε>0, that is, there at least exists a local minimizer ^βn such that ∥^βn−β0∥=OP(αn) in the closed ball {β0+αnu:∥u∥≤C}. Firstly by the triangle inequality we can get that

We can easily obtain E(T111)=0. From Von-Bahr Esseen inequality, Schwarz inequality and the condition (B3), it follows that

together by Markov inequality yields that

This together with (3.3)-(3.7) yields that we can choose a great enough constant C such that T111 and T2 is controlled by T112, which follows that there at least exists a local minimizer ^βn such that ∥^βn−β0∥=OP(αn) in the closed ball {β0+αnu:∥u∥≤C}. □

holds, for any pn-dimensional vector u=(uT(1),uT(2))T. We can easily find the fact that

where Hi and Ji are kn and pn−kn dimensional vectors respectively such that xi=(HTi+JTi)T. Similar to the proof of Theorem 3.1, we get that

In the following part we give the Taylor expansion of upper left first term:

Noticing that yi=HTiβ0(1)+εi, we have