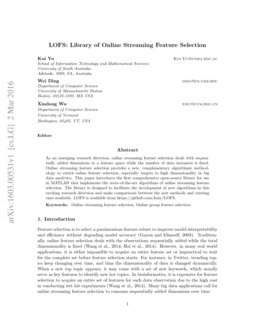 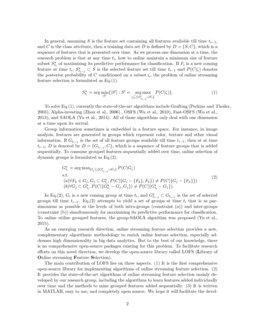 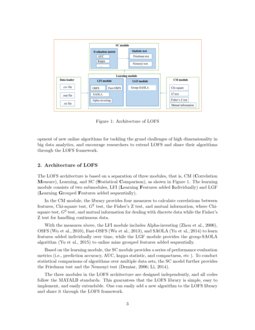 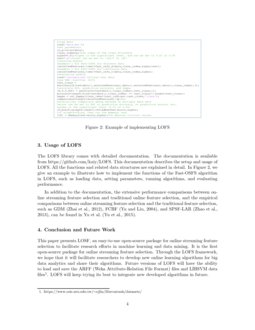 Feature selection is to select a parsimonious feature subset to improve model interpretability and efficiency without degrading model accuracy (Guyon and Elisseeff, 2003). Traditionally, online feature selection deals with the observations sequentially added while the total dimensionality is fixed (Wang et al., 2014; Hoi et al., 2014). However, in many real world applications, it is either impossible to acquire an entire feature set or impractical to wait for the complete set before feature selection starts. For instance, in Twitter, trending topics keep changing over time, and thus the dimensionality of data is changed dynamically. When a new top topic appears, it may come with a set of new keywords, which usually serve as key features to identify new hot topics. In bioinformatics, it is expensive for feature selection to acquire an entire set of features for each data observation due to the high cost in conducting wet lab experiments (Wang et al., 2014). Many big data applications call for online streaming feature selection to consume sequentially added dimensions over time.

In general, assuming S is the feature set containing all features available till time ti−1, and C is the class attribute, then a training data set D is defined by D={S,C}, which is a sequence of features that is presented over time. As we process one dimension at a time, the research problem is that at any time ti, how to online maintain a minimum size of feature subset S⋆ti of maximizing its predictive performance for classification. If Fi is a new coming feature at time ti, S⋆ti−1⊂S is the selected feature set till time ti−1 and P(C|ζ)

denotes the posterior probability of

C conditioned on a subset ζ, the problem of online streaming feature selection is formulated as Eq.(1).

Group information sometimes is embedded in a feature space. For instance, in image analysis, features are generated in groups which represent color, texture and other visual information. If Gti−1 is the set of all feature groups available till time ti−1, then at at time ti−1, D is denoted by D={Gti−1,C}, which is a sequence of feature groups that is added sequentially. To consume grouped features sequentially added over time, online selection of dynamic groups is formulated as Eq.(2).

In Eq.(2), Gi is a new coming group at time ti, and G⋆ti−1⊂Gti−1 is the set of selected groups till time ti−1. Eq.(2) attempts to yield a set of groups at time ti that is as parsimonious as possible at the levels of both intra-groups (constraint (a)) and inter-groups (constraint (b)) simultaneously for maximizing its predictive performance for classification. To online utilize grouped features, the group-SAOLA algorithm was proposed (Yu et al., 2015).

As an emerging research direction, online streaming feature selection provides a new, complementary algorithmic methodology to enrich online feature selection, especially addresses high dimensionality in big data analytics. But to the best of our knowledge, there is no comprehensive open-source packages existing for this problem. To facilitate research efforts on this novel direction, we develop the open-source library called LOFS (Library of Online streaming Feature Selection).

The main contribution of LOFS lies on three aspects. (1) It is the first comprehensive open-source library for implementing algorithms of online streaming feature selection. (2) It provides the state-of-the-art algorithms of online streaming feature selection mainly developed by our research group, including the algorithms to learn features added individually over time and the methods to mine grouped features added sequentially. (3) It is written in MATLAB, easy to use, and completely open source. We hope it will facilitate the development of new online algorithms for tackling the grand challenges of high dimensionality in big data analytics, and encourage researchers to extend LOFS and share their algorithms through the LOFS framework.

The LOFS architecture is based on a separation of three modules, that is, CM (Correlation Measure), Learning, and SC (Statistical Comparison), as shown in Figure 1. The learning module consists of two submodules, LFI (Learning Features added Individually) and LGF (Learning Grouped Features added sequentially).

Based on the learning module, the SC module provides a series of performance evaluation metrics (i.e., prediction accuracy, AUC, kappa statistic, and compactness, etc ). To conduct statistical comparisons of algorithms over multiple data sets, the SC model further provides the Friedman test and the Nemenyi test

The three modules in the LOFS architecture are designed independently, and all codes follow the MATALB standards. This guarantees that the LOFS library is simple, easy to implement, and easily extendable. One can easily add a new algorithm to the LOFS library and share it through the LOFS framework.

The LOFS library comes with detailed documentation. The documentation is available from https://github.com/kuiy/LOFS. This documentation describes the setup and usage of LOFS. All the functions and related data structures are explained in detail. In Figure 2, we give an example to illustrate how to implement the functions of the Fast-OSFS algorithm in LOFS, such as loading data, setting parameters, running algorithms, and evaluating performance.

This paper presents LOSF, an easy-to-use open-source package for online streaming feature selection to facilitate research efforts in machine learning and data mining. It is the first open-source package for online streaming feature selection. Through the LOFS framework, we hope that it will facilitate researchers to develop new online learning algorithms for big data analytics and share their algorithms. Future versions of LOFS will have the ability to load and save the ARFF (Weka Attribute-Relation File Format) files and LIBSVM data files