Deep learning has dramatically improved the performance of speech recognition systems through learning hierarchies of features optimized for the task at hand. However, true end-to-end learning, where features are learned directly from waveforms, has only recently reached the performance of hand-tailored representations based on the Fourier transform. In this paper, we detail an approach to use convolutional filters to push past the inherent tradeoff of temporal and frequency resolution that exists for spectral representations. At increased computational cost, we show that increasing temporal resolution via reduced stride and increasing frequency resolution via additional filters delivers significant performance improvements. Further, we find more efficient representations by simultaneously learning at multiple scales, leading to an overall decrease in word error rate on a difficult internal speech test set by 20.7 spectrograms. 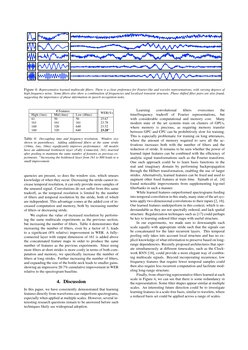 Raw speech waveforms are densely sampled in time, and thus require downsampling to make many analysis techniques computationally tractable. For speech recognition, this presents the challenge to reduce the number of timesteps in the signal without throwing away relevant information. Representations based on the Fourier transform have proven effective at this task as the transform forms a complete basis for signal reconstruction. Deep learning’s recent success in speech recognition is based on learning feature hierarchies atop these representations [1, 2].

There has been increasing focus on extending this end-to-end learning approach down to the level of the raw waveform. A popular approach is pass the waveform through strided convolutions, or networks connected to local temporal frames, often followed by a pooling step to create invariance to phase shifts and further downsample the signal [3, 4, 5, 6, 7, 8]. While some studies find inferior performance for convolutional filters learned in this way, deeper networks have recently matched the performance of hand-engineered features on large vocabulary speech recognition tasks [4].

Features based on the Fourier transform are computationally efficient, but exhibit an intrinsic tradeoff of temporal and frequency resolution. Convolutional filters decouple time and frequency resolution as the number of filters and stride are chosen independently. Despite this, a filter bank is constrained by its window size to a single scale. Herein, we explore jointly learning filter banks at multiple different scales on raw waveforms. Multiscale convolutions have already been successfully applied to address tasks in the computer vision field, such as image classification

[9], scene labeling [10], and gesture detection [11]. These successful applications exploit structure at different scales, which encourages us to explore multiscale representations for waveforms as well.

Further, multiscale convolutions enable us to split the spectrum into different filter banks with independent choice of stride, window size, and number of filters. To learn high frequency features, filters with a short window are applied at a small stride on the waveforms. Low-frequency features, on the contrary, employ a long window that can be applied at a larger stride. Finally, based on the needs of the speech recognition system we can then independently tune the number of filters for the different frequency bands.

While much research has already been conducted on learning directly from waveforms for speech recognition, the unique contributions of this paper are threefold:

The experimental design of this study is modelled after our previous work on end-to-end speech recognition [12, 2]. However, to decrease the experimental latency, we train on a reduced version of the model and a subset of the training data. The basic architecture is shown in Table 1

. While we vary the front end processing, the backend remains the same: a convolutional (through time) layer, followed by three bidirectional simple recurrent layers, and a fully connected layer. Batch normalization

[13], is employed between each layer, but not between individual timesteps [2]

. Rectified linear unit (ReLU) activation functions are used for all layers, including between timesteps. We use the Connectionist Temporal Classification (CTC) cost function to integrate over all possible alignments between the network outputs and characters of the English alphabet

Training is conducted on 2,400 hours of audio randomly sampled from 12,000 hours of data. The training data is drawn from a diverse collection of sources including read, conversational, accented, and noisy speech [2]

. At each epoch, 40% of the utterances are randomly selected to have background noise (superpositions of YouTube clips) added at signal-to-noise ratios ranging from 0dB to 15dB

. All input data (either spectrogram or waveform) is sampled at 16kHz, and normalized so that each input feature has zero mean and unit variance. For models that learn directly from

waveforms, no other preprocessing is applied and the network inputs have 1 feature per 1/16ms frame. For models that learn from spectrograms, linear FFT features are extracted with a hop size of 10ms, and window size of 20ms. The network inputs are thus spectral magnitude maps ranging from 0-8kHz with 161 features per 10ms frame.

We train using stochastic gradient descent with Nesterov momentum and a batch size of 128. Hyperparameters are tuned for each model by optimizing a hold-out set. Typical values are a learning rate of 3e-4 and momentum of 0.99, and training converges after 20 epochs. Following

[2], we sort the first epoch by utterance length (SortaGrad), to promote stability of training on long utterances. While the CTC-trained acoustic model learns a rudimentary language model itself from the training data, for testing, we supplement it with a Kneser-Ney smoothed 5-gram model that is trained using the KenLM toolkit [15] on cleaned text from the Common Crawl Repository. Decoding is done via beam search, where a weighted combination of the acoustic model and language model with an added word insert penalty is used as the value function. Test set word error rates (WER) are reported on a difficult in-house test set of 2048 utterances, diversely composed of noisy, conversational, voice-command, and accented speech. The test set is collected internally and from industry partners and is not represented in the training data.

As previously observed [2], deep neural networks trained on sufficient data perform better as the model size grows. In order to make fair comparisons, the number of parameters of the models used in our experiments is held constant at 35M. We are aware that the results are not directly comparable to literature due to the use of proprietary datasets. However, we attempt to tightly control our experiments rather than focus on overall performance, with the aim that the conclusions will generalize to other architectures and datasets as well. If optimizing for performance, it is worth noting that the WER drops by ∼50% when training on all 12,000 hours of data with 7 bidirectional layers (70M parameters) in the backend.

While many studies have compared convolution on raw waveforms to features such as spectrograms, MFCCs, and melscale filterbanks, they often compare the two at a similar strides and window sizes [5, 6]. Spectrograms can employ a high stride because of the unique analytic structure of the basis functions. Integrating twice, once over the real cosine and once over its imaginary sine counterpart, identifies both the phase and magnitude of the response. This is in many ways similar to performing a convolution over every timestep and max-pooling, with the phase represented by the index at which the max occurs, but is much more computationally efficient to perform with an FFT.

Representing high frequency information with a large filter is difficult because of the many places the information can occur in the filter window. Similarly, representing low frequency information with a small filter is challenging because separate filters are required for separate parts of the wave. We hypothesized that applying convolution simultaneously at several scales could allow each scale to learn filters selective to the frequencies that it can most efficiently represent. To test our hypothesis, we compare the performance of convolutional front ends with a constant number of filters at three different scales (High: (1ms window, 1/4ms stride), Mid: (4ms, 1ms), and Low: (40ms, 10ms)), to a front end employing all three scales (Diagramed in Figure 1.

Table 3 shows that WER significantly decreases from High to Mid to Low frequency filter banks. The improved performance of the lower frequency banks is evidence for the importance of low frequency vocalization features in speech recognition [4]. Figure 3 displays the spectral centroids of each filter bank sorted by frequency, with the mean value printed alongside. It is clear that the High (2800Hz), Mid (1700Hz), and Low (940Hz) filter banks live up to their names, each learning filters that capture different frequency bands. When we jointly learn several scales, the filters exhibit a an heightened preference for representing different bands. Relaxing the requirement of each bank to cover the entire spectrum causes the High (3500Hz) banks to increase in mean frequency, and the Mid (1300Hz) and Low (480Hz) banks to decrease. Further, the WER is lowest for the multiscale features, despite the fact that it has fewer parameters and three times less large filters.

With methods based on the Fourier transform, there is an intrinsic tradeoff of temporal and frequency resolution. As the number of basis functions increases, helping identify which frequencies are present, so does the window size, which smears knowledge of when they occur. Decreasing the stride cannot increase temporal resolution, it can only provide more samples of the smeared signal. Convolutions do not suffer from this same tradeoff, as the temporal resolution is limited by the number of filters and temporal resolution by the stride, both of which are independent. This advantage comes at the added cost of increased computation and memory, both by increasing number of filters or decreasing stride.

In this paper, we have consistently demonstrated that learning features directly from waveforms can outperform spectrograms, especially when applied at multiple scales. However, several interesting research questions remain to be answered before such techniques likely see widespread adoption.

Learning convolutional filters overcomes the time/frequency tradeoff of Fourier representations, but with considerable computational and memory cost. Many modern state of the art systems train on clusters of GPUs, where memory is precious, as requiring memory transfer between GPU and CPU can be prohibitively slow for training. This is especially problematic for training on long utterances, where the amount of memory required to save all the activations increases both with the number of filters and the reduction of stride. It remains to be seen whether the power of learned input features can be combined with the efficiency of analytic signal transformations such as the Fourier transform. One such approach could be to learn basis functions in the real and imaginary domain by performing backpropagation through the Hilbert transformation, enabling the use of larger strides. Alternatively, learned features can be fixed and used to augment other fixed features at train time. Sainath et al.

[4] found noticeable improvements from supplementing log-mel filterbanks in such a manner.

While learned features outperformed spectrograms feeding into temporal convolution in this study, many state of the art systems apply two-dimensional convolutions to their inputs [2, 16]. Our learned features underperform in this context, which is understandable as they are not spectrally ordered, and lack spatial structure. Regularization techniques such as [17] could perhaps be key to learning ordered filter maps with useful structure.

In our experiments, we made sure to downsample each scale equally with appropriate stride such that the signals can be concatenated for the later recurrent layers. This temporal pooling only takes into account local structure and has no explicit knowledge of what information to preserve based on long-range dependencies. Recently proposed architectures that operate simultaneously at different timescales, such as the Clockwork RNN [18], could provide a more elegant way of combining multiscale signals. Beyond incorporating recurrence, low frequency features that require fewer temporal samples could then also require less recurrent computation and facilitate modeling long-range structure.

Finally, from observing representative filters learned at each scale in Figure 4, we can see that there is some redundancy in the representation. Some filter shapes appear similar at multiple scales. An interesting future direction could be to investigate learning features in a scale-free basis, similar to wavelets, where a reduced basis set could be applied across a range of scales.