It remains very challenging to build a pedestrian detection system for real world applications, which demand for both accuracy and speed. This work presents a novel hierarchical knowledge distillation framework to learn a lightweight pedestrian detector, which significantly reduces the computational cost and still holds the high accuracy at the same time. Following the `teacher--student' diagram that a stronger, deeper neural network can teach a lightweight network to learn better representations, we explore multiple knowledge distillation architectures and reframe this approach as a unified, hierarchical distillation framework. In particular, the proposed distillation is performed at multiple hierarchies, multiple stages in a modern detector, which empowers the student detector to learn both low-level details and high-level abstractions simultaneously. Experiment result shows that a student model trained by our framework, with 6 times compression in number of parameters, still achieves competitive performance as the teacher model on the widely used pedestrian detection benchmark. 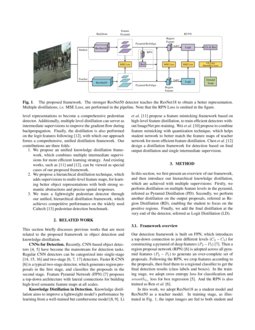 Pedestrian detection is a long-standing topic in computer vision. It aims to locate and classify pedestrians of various sizes and aspect ratios. It plays a crucial role in many applications, ranging from video surveillance to autonomous driving, which usually demand for both fast and accurate detection.

Recent years have seen a tremendous increase in the accuracy of pedestrian detection, relying on deep convolutional neural networks (CNNs)

[10, 20, 8]. CNN-based object detectors [5, 6, 17, 12], such as Faster R-CNN, have become the mainstream approaches for object detection. With increasingly deeper architecture, these models achieve better performance, which are usually associated with growing computational expense. Consequently, the speed-accuracy trade-off makes it difficult for these cumbersome detectors to be applied in real-world scenarios. In this work, we aim at learning a pedestrian detector with both faster speed and satisfied accuracy through hierarchical knowledge distillation.

Knowledge distillation aims to improve a lightweight model’s performance by learning from a well-trained but cumbersome model [9]. It usually formulates a teacher-student architecture [18], which treats the lightweight model as the student, and the cumbersome model as the teacher. At first, distillation technique was applied in classification tasks, but recent works show great potentials of knowledge distillation in detection tasks [21, 11, 3]. Li et al. [11]

et al. [3] use the final output of the teacher’s region proposal network and region classification network as the distillation targets, and also adopt a intermediate supervision to improve the student’s performance.

However, these works have several shortcomings. Only high-level features are considered to perform distillation in [11], which loses much spatial information. Thus their model can not easily detect pedestrians with severe scale variations. An intermediate supervision is also considered as a distillation target in [3], but it turns out that their student detectors still are lack of supervisions from multiple levels, which are crucial to knowledge distillation.

In this paper, we propose a unified hierarchical knowledge distillation framework for pedestrian detection task. Firstly, instead of adding a supervision to the final feature map, we perform knowledge distillation in multiple layers, ranging from low-level local details to high-level semantic abstractions, referred as pyramid distillation. Secondly, we perform pyramid RoIAlign to extract features from multi-level feature maps followed with a concatenation operation, and apply distillation on all levels, which enables the student to see more feature levels with wider receptive field. The intuition behind is that a student should also learn spatial details as well as high level representations to become a comprehensive pedestrian detector. Additionally, multiple level distillation can server as intermediate supervisions to improve the gradient flow during backpropagation. Finally, the distillation is also performed on the logit features following

[3], with which our approach forms a comprehensive, unified distillation framework. Our contributions are three folds:

This section briefly discusses previous works that are most related to the proposed framework in object detection and knowledge distillation.

CNNs for Detection. Recently, CNN-based object detectors [5, 6] have become the mainstream for detection tasks. Regular CNN detectors can be categorized into single-stage [16, 14, 13] and two-stage [17, 12, 19] detectors. Faster R-CNN [17] is a typical two-stage detector, which generates region proposals in the first stage, and classifies the proposals in the second stage. Feature Pyramid Network (FPN) [12] proposes a top-down architecture with lateral connections for building high-level semantic feature maps at all scales.

Our detection framework is built on FPN, which introduces a top-down connection to join different levels (C2 – C5

) for constructing a pyramid of deep features (

P2 – P5) [12]. Then a region proposal network (RPN) [17] is adopted across all pyramid features (P2 – P5) to generate an over-complete set of proposals. Following the RPN, we crop features according to the proposals, then feed them to a regional classifier to get the final detection results (class labels and boxes). In the training stage, we adopt cross entropy loss for classification and smoothL1 loss for box regression [6]. And the RPN is also trained as Ren et al. [17].

In this work, we adopt ResNet18 as a student model and ResNet50 as a teacher model. In training stage, as illustrated in Fig. 1, the input images are fed to both student and teacher model for feature extraction. Pyramid features,

e.g. ({P2,P3,P4,P5}), are generated for both of them. Then, the region of interests (RoIs) generated by the student are used to crop regions in the pyramids for both of the student and the teacher detector. And RPN is followed by two fully-connected layers (FCs) and a pair of siblings for computing the final output classes and boxes.

Inputs are first fed into FPNs to generate feature pyramids for both student and teacher models, denoted by {P2,P3,P4,P5}. Different levels in the feature pyramid often contains information with different semantic meanings. The lowest level P2 contains only local details, such as edges and contours. As we going deeper with the pyramid level, for instance, the highest level P5, contains more abstractions or stronger semantic meanings, e.g. object parts. Instead of letting the student only focuses on learning the abstractions, it is equivalently important for learning the details. Previous methods often omit this learning objective, to tackle above problem, we propose pyramid distillation for learning better object representations with both strong abstractions and precise details. As shown in Fig. 2 (a), the Pyramid Distillation is defined as:

RoIAlign is first introduced in Mask R-CNN [7]. A certain level of feature in the feature pyramid is first found according to the area of each RoI, then the region feature is cropped within that level, as shown in Fig. 2 (b). In this work, for each RoI we crop features from all levels of the feature pyramid, as shown in Fig. 2 (a). The resulting region feature (R⋅) contains both low-level details and high-level abstractions. Based on Pyramid RoIAlign, we define Region Distillation as:

where NR is the number of total locations in the regions.

Additionally, we also add a final distillation in the training stage. In the second stage of a detector, we add Logit Distillation on the fully connected layer before the detection output, which forces the student to mimic the teacher’s final behavior. It is defined as:

where NG is number of proposals in the second stage detector.

The final objective of our proposed hierarchical knowledge distillation is:

where λPD,λRD,λLD are factors, which balance all the objectives so that they are at the same magnitude.

In this section, we first introduce dataset, evaluation metrics, implementation details and overall performance. Then, we perform ablation study to validate the contributing factors proposed in this work. At the end, we compare our unified framework with other state-of-the-art methods.

Dataset. We evaluate our unified, hierarchical knowledge distillation framework on Caltech dataset [4]. This pedestrian detection dataset contains 2.5 hours videos captured from a moving vehicle. We train our model on Caltech10×, which samples ten times frames from the videos than original training set [23], but using the original annotations still. In evaluation, we test the model on the standard test set and report results on Reasonable configuration.

Our model is trained for 6 epochs using a SGD optimizer with initial learning rate of 0.002. And we decrease the learning rate by a factor of 0.1 at the 4th and 6th epochs. The size of input image is set to

960×720, which is 1.5 times of the original image. We adopt randomly horizontal flipping as the only data augmentation. In the final distillation objective, the parameters λPD, λRD and λLD is set to 0.5, 30 and 30, respectively.

Overall performance. In Table 1, training through our proposed distillation framework, with 6 times compression in number of parameters, our student model still achieves competitive performance as the teacher model, with 10.03% MR on reasonable subset and 12.28% MR on small subset.

In Table 2, we validate the contributing factors proposed in this work, including Pyramids Distillation (PD), Region Distillation (RD), Logit Distillation (LD) and Pyramid RoIAlign (PyRoIAlign). Compared with the baseline (2nd row of Table 2), using LD (3rd row) as the only intermediate supervision improves our performance by 1.09%. Only using RD (5th row) as supervision shows more significant improvement by 1.70%. It proves that region feature contains more supervision than the final output logit, because the dimension of logit is significantly reduced for passing through two FC layers. PyRoIAlign is critical to our distillation framework, which boosts our performance by a notable margin. Using RD without PyRoIAlign (4th row) merely boosts our performance by 0.57%, which drops 1.13% compared with enabling PyRoIAlign (5th row). This performance degradation is caused by using supervision only from single-level features for distillation, as mentioned earlier in Sec 3.2.1. Moreover, we combine supervisions from both RD and LD at the same time (6th row), which gains notable improvements by 1.78%. Further more, we add supervision from PD to form our comprehensive, hierarchical distillation framework (8th row), and experiment result demonstrates the effectiveness of proposed framework, with 2.49% performance boosting compared with baseline method. Comparing with experiment without PD (6th row), this experiment (8th row) also proves that PD is critical to our unified framework, which contributes 0.71% performance improvements. Most importantly, this experiment (8th row) shows the best performance of our proposed student model, which achieves 10.03% MR in the reasonable subset. And it is a very competitive performance compared with our teacher model, thus further proves the effectiveness of our comprehensive, hierarchical distillation framework.

4.2 Comparison with other methods

We propose a comprehensive, hierarchical knowledge distillation framework for training lightweight pedestrian detector. Comparing with single-level supervision, our unified framework utilize multiple intermediate supervisions for distillation, which significantly improves the efficiency of transferring knowledge from a teacher model to a student model. Besides, our hierarchical distillation framework helps our student model learn better representations from multi-level feature maps with both abstractions and details. Experiment results on Caltech pedestrian detection benchmark demonstrate the effectiveness of our proposed framework.