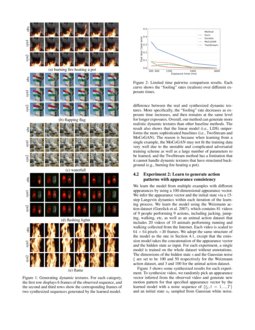 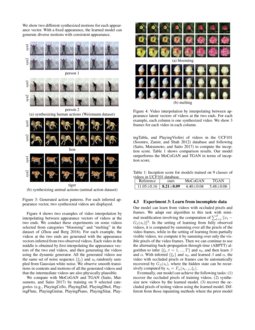 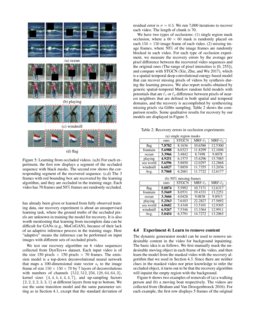 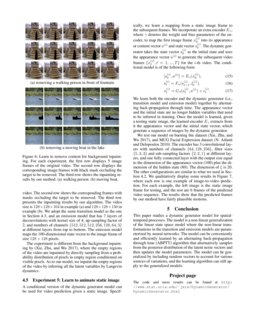 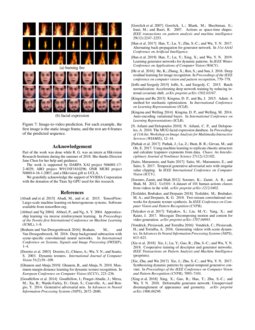 Most physical phenomena in our visual environments are spatial-temporal processes. In this paper, we study a generative model for spatial-temporal processes such as dynamic textures and action sequences in video data. The model is a non-linear generalization of the linear state space model proposed by [Doretto et al.2003] for dynamic textures. The model of [Doretto et al.2003]

, the emission model is learned by treating all the frames of the input video sequence as independent observations, and the linear mapping is learned by principal component analysis via singular value decomposition. This reduces the

Given the high approximation capacity of the modern deep neural networks, it is natural to replace the linear structures in the transition and emission models of [Doretto et al.2003] by the neural networks. This leads to the following dynamic generator model that has the following two components. (1) The emission model, which is a generator network that maps the d-dimensional state vector to the D

-dimensional image via a top-down deconvolution network. (2) The transition model, where the state vector of the next frame is obtained by a non-linear transformation of the state vector of the current frame as well as an independent Gaussian white noise vector that provides randomness in the transition. The non-linear transformation can be parametrized by a feedforward neural network or multi-layer perceptron. In this model, the latent random vectors that generate the observed data are the independent Gaussian noise vectors, also called innovation vectors in

[Doretto et al.2003]. The state vectors and the images can be deterministically computed from these noise vectors.

Such dynamic models have been studied in the computer vision literature recently, notably

[Tulyakov et al.2017]. However, the models are usually trained by the generative adversarial networks (GAN) [Goodfellow et al.2014] with an extra discriminator network that seeks to distinguish between the observed data and the synthesized data generated by the dynamic model. Such a model may also be learned by variational auto-encoder (VAE) [Kingma and Welling2014] together with an inference model that infers the sequence of noise vectors from the sequence of observed frames. Such an inference model may require a sophisticated design.

Two advantages of the ABPTT algorithm for the dynamic generator models are convenience and efficiency. The algorithm can be easily implemented without designing an extra network. Because it only involves back-propagations through time with respect to a single model, the computation is very efficient.

The proposed learning method is related to the following themes of research.

GAN and VAE. The dynamic generator model can also be learned by GAN or VAE. See [Tulyakov et al.2017] [Saito, Matsumoto, and Saito2017] and [Vondrick, Pirsiavash, and Torralba2016] for recent video generative models based on GAN. However, GAN does not infer the latent noise vectors. In VAE [Kingma and Welling2014], one needs to design an inference model for the sequence of noise vectors, which is a non-trivial task due to the complex dependency structure. Our method does not require an extra model such as a discriminator in GAN or an inference model in VAE.

Models based on spatial-temporal filters or kernels.

The patterns in the video data can also be modeled by spatial-temporal filters by treating the data as 3D (2 spatial dimensions and 1 temporal dimension), such as a 3D energy-based model

[Xie, Zhu, and Wu2017] where the energy function is parametrized by a 3D bottom-up ConvNet, or a 3D generator model [Han et al.2019] where a top-down 3D ConvNet maps a latent random vector to the observed video data. Such models do not have a dynamic structure defined by a transition model, and they are not convenient for predicting future frames.

The main contribution of this paper lies in the combination of the dynamic generator model and the alternating back-propagation through time algorithm. Both the model and algorithm are simple and natural, and their combination can be very useful for modeling and analyzing spatial-temporal processes. The model is one-piece in the sense that (1) the transition model and emission model are integrated into a single latent variable model. (2) The learning of the dynamic model is end-to-end, which is different from [Han et al.2017]’s treatment. (3) The learning of our model does not need to recruit a discriminative network (like GAN) or an inference network (like VAE), which makes our method simple and efficient in terms of computational cost and model parameter size.

Let X=(xt,t=1,...,T) be the observed video sequence, where xt is a frame at time t. The dynamic generator model consists of the following two components:

where t=1,...,T. (1) is the transition model, and (2) is the emission model. st is the d-dimensional hidden state vector. ξt∼N(0,I) is the noise vector of a certain dimensionality. The Gaussian noise vectors (ξt,t=1,...,T) are independent of each other. The sequence of (st,t=1,...,T) follows a non-linear auto-regressive model, where the noise vector ξt encodes the randomness in the transition from st−1 to st in the d-dimensional state space. Fα is a feedforward neural network or multi-layer perceptron, where α denotes the weight and bias parameters of the network. We can adopt a residual form [He et al.2016] for Fα to model the change of the state vector. xt is the D-dimensional image, which is generated by the d-dimensional hidden state vector st. Gβ is a top-down convolutional network (sometimes also called deconvolution network), where β denotes the weight and bias parameters of this top-down network. ϵt∼N(0,σ2ID) is the residual error. We let θ=(α,β) denote all the model parameters.

is the identity matrix whose dimension matches that of

X. The marginal distribution is pθ(X)=∫p(ξ)pθ(X|ξ)dξ with the latent variable ξ

integrated out. We estimate the model parameter

where the stochasticity of the gradient ascent comes from the fact that we use Monte Carlo to approximate the expectation in (3). The learning algorithm iterates the following two steps. (1) Inference step: Given the current θ, sample ξ from pθ(ξ|X) according to (4). (2) Learning step: Given ξ, update θ according to (5). We can use a warm start scheme for sampling in step (1). Specifically, when running the Langevin dynamics, we start from the current ξ, and run a finite number of steps. Then we update θ in step (2) using the sampled ξ. Such a stochastic gradient ascent algorithm has been analyzed by [Younes1999].

Since ∂∂ξlogpθ(ξ|X)=∂∂ξlogpθ(ξ,X), both steps (1) and (2) involve derivatives of

To be more specific, the complete-data log-likelihood logpθ(ξ,X) can be written as (up to an additive constant, assuming σ2=1)

The derivative with respect to β is

The derivative with respect to α is