LAYERS: Yet another Neural Network toolkit

Layers is an open source neural network toolkit aim at providing an easy way to implement modern neural networks. The main user target are students and to this end layers provides an easy scriptting language that can be early adopted. The user has to focus only on design details as network totpology and parameter tunning. 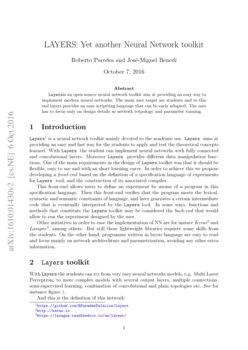 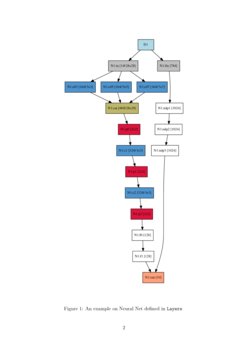 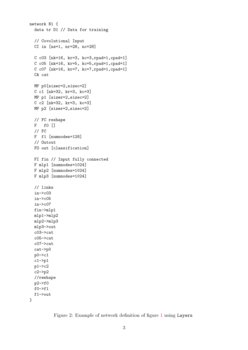 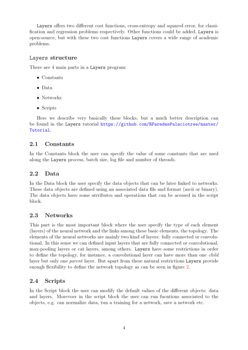 In this paper we discuss the theory used in the design of an open source...
D. Damian, et al. ∙

NeuroX: A Toolkit for Analyzing Individual Neurons in Neural Networks

We present a toolkit to facilitate the interpretation and understanding ...
Fahim Dalvi, et al. ∙

LEGOEval: An Open-Source Toolkit for Dialogue System Evaluation via Crowdsourcing

Layers111https://github.com/RParedesPalacios/Layers is a neural network toolkit mainly devoted to the academic use. Layers  aims at providing an easy and fast way for the students to apply and test the theoretical concepts learned. With Layers  the student can implement neural netowrks with fully connected and concolutional layers. Moreover Layers  provides different data manipulation functions. One of the main requirements in the design of Layers toolkit was that it should be flexible, easy to use and with an short learning curve. In order to achieve this we propose developing a front-end based on the definition of a specification language of experiments for Layers  tool, and the construction of its associated compiler.

This front-end allows users to define an experiment by means of a program in this specification language. Then this front-end verifies that the program meets the lexical, syntactic and semantic constraints of language, and later generates a certain intermediate code that is eventually interpreted by the Layers tool. In some ways, functions and methods that constitute the Layers toolkit may be considered the back-end that would allow to run the experiment designed by the user.

Other initiatives in order to ease the implementation of NN are for instace Keras222http://keras.io and Lasagne333https://lasagne.readthedocs.io/en/latest/, among others. But still these lightweight libraries requiere some skills from the students. On the other hand, programms written in layers language are easy to read and focus mainly on network architechture and parametrization, avoiding any other extra information.

And this is the definition of this network:

Layers offers two different cost functions, cross-entropy and squared error, for classification and regression problems respectively. Other functions could be added, Layers is open-source, but with these two cost functions Layers covers a wide range of academic problems.

There are 4 main parts in a Layers program:

Here we describe very basically these blocks, but a much better description can be found in the Layers tutorial https://github.com/RParedesPalaciotree/master/Tutorial.

In the Constants block the user can specify the value of some constants that are used along the Layers process, batch size, log file and number of threads.

This part is the most important block where the user specify the type of each element (layers) of the neural network and the links among these basic elements, the topology. The elements of the neural networks are mainly two kind of layers: fully connected or convolutional. In this sense we can defined input layers that are fully connected or convolutional, max-pooling layers or cat layers, among others.

Layers have some restrictions in order to define the topology, for instance, a convolutional layer can have more than one child layer but only one parent layer. But apart from these natural restrictions Layers provide enough flexibility to define the network topology as can be seen in figure 2.

3 A front-end for Layers

In the previous Section 2 we have presented the most significant features of the Layers tool as well as their main alternative uses. As it mentioned above, one of the main motivations for the creation of the Layers toolkit is that it should be easy to use, and it should have a learning effort as low as possible. In order to do this, we propose here a complete front-end for Layers toolkit.

This front-end is composed by a specification language of experiments in Layers toolkit, and its associated compiler.

The Layers language is a simple specification language for proper management of this toolkit. A Layers program defines an experiment or set of experiments and consists of four main sections: definition of general constants, data and networks, and description of scripts.

In order to define the Layers specification language we introduce below the lexical conventions, and the syntactic-semantic constraints of Layers .

Lexical conventions of Layers language could be summarized as:

3.1.2 Syntax and semantics of Layers

A program in Layers specification language consists of an optional definition of general constants, followed by a sequence of definitions of data, networks and scripts, in any order.

General constants have the following default values: size of the batch for the network (batch=100), number of threads for parallelization (threads=4), and log file where some messages are saved (log=‘‘netparser.log′′).

Data section defines the corpora to be used in experiments. For its management in the program, data must be associated with internal variable names. Data can be read in ascii (ascii) or binary (binary) format, being possible to use their full path.

The definition of a network is composed in turn of 3 main parts: definition of the used data, the selected layers, and connections defined between these layers.

For each network it is necessary to explicitly define the data sets it uses: training data set (tr), which is mandatory, and validation (va) and test (ts) data, which are both optional. When test or validation data are provided the error function of the network will be also evaluated for that data sets. Data identifiers (id) must be previously defined in a data section.

As described in the previous Section 2, in the Layers toolkit are defined the following types of layers:

Whether for a particular layer or for all layers of a network we can modify some of their parameters. For layers and networks, the integer parameters that can currently be modified they are:

and real type parameters are:

For data, we can only modify the following (integer) parameter:

In Layers we defined a set of functions can be applied to networks, layers, or data.

For networks the following functions are defined: train

,  to train a network with a specified number of epochs;

For layers only the next function is defined: printkernels,  to save the parameters of a layer to a particular file.

For data the following functions are defined: zscore,  to normalize data; yuv,  to convert RGB maps to YUV maps; center  to center data (mean=0); and div  to divide all the data by a specific value.

Finally we also define a function that allows us to train together a list of previously defined networks, specifying the number of epochs and the number of batches.

3.2 A compiler for Layers

From the lexical specification, and the syntactic-semantic specification we have developed a complete compiler [1, 3] for the specification language Layers . The front-end of this compiler consists of two main modules. The first one is a scanner to check whether the input program complies with lexical restrictions defined in Section 3.1.1. This scanner has been implemented using a standard GNU tool for automatic generation of lexical analyzers: Flex [4].

The second module is a parser to check whether the input program complies with syntactic-semantic constraints defined in Section 3.1.2. This parser has been implemented using a standard GNU tool for automatic generation of parsers: Bison [2].

This front-end is completed with a set of functions representing the semantic actions necessary to produce intermediate code interpretable by the Layers toolkit (the back-end of compiler).