The dominant paradigms for video prediction rely on opaque transition models where neither the equations of motion nor the underlying physical quantities of the system are easily inferred. The equations of motion, as defined by Newton's second law, describe the time evolution of a physical system state and can therefore be applied toward the determination of future system states. In this paper, we introduce a video prediction model where the equations of motion are explicitly constructed from learned representations of the underlying physical quantities. To achieve this, we simultaneously learn a low-dimensional state representation and system Lagrangian. The kinetic and potential energy terms of the Lagrangian are distinctly modelled and the low-dimensional equations of motion are explicitly constructed using the Euler-Lagrange equations. We demonstrate the efficacy of this approach for video prediction on image sequences rendered in modified OpenAI gym Pendulum-v0 and Acrobot environments. 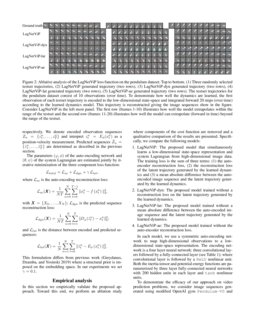 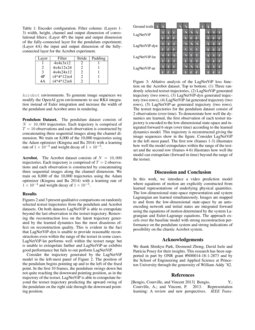 Video prediction is a longstanding challenge in computer vision. While neural network models have provided significant advancements in the high-dimensional data regime, these advancements typically fail to provide an interpretable representation of the data-generating distribution. Juxtaposed against increased adoption of neural learning systems in safety critical domains, a growing segment of the community is advocating for the incorporation of physical priors to improve both the interpretability of representations and the generalizability of neural network models

[bengio2013representation]. By identifying the low-dimensional state-space manifold, well-understood physical principles can be leveraged to model the evolution of the system.

The time evolution of a physical system is determined by its equations of motion. Given the system Lagrangian, which is system kinetic energy minus system potential energy, the equations of motion can be derived using the Euler-Lagrange equations [goldstein2002classical]. Previous works [cranmer2020lagrangian, lutter2019deep] have shown that it is possible to learn the system Lagrangian from low-dimensional measurements. In this work, we present an approach to simultaneously learn a low-dimensional state-space representation and system Lagrangian from high-dimensional image data. In our approach, images are mapped to and from the low-dimensional state-space by an auto-encoding neural network and initial states are integrated forward using the equations of motion determined by the system Lagrangian and Euler-Lagrange equations. Towards interpretability of the representation, the inertia tensor, which determines the kinetic energy, and the potential energy are parameterized by distinct neural networks. A pictorial representation of our model (LagNetViP) is given in Figure 1.

Recurrent neural networks (RNNs) have been applied to a broad class of sequence prediction problems including language modeling, machine translation, image processing and audio processing [graves2013generating, cho2014learning, srivastava2015highway, oord2016wavenet]. The utility of RNNs stems from the architectural structure, which enforces parameter sharing and encourages the network to learn statistics that generalize across sequences.

When sequential data can be interpreted as the observations of a dynamical system, the structure of difference or differential equations can be leveraged for prediction. Sequential image data is necessarily discrete although the generating process for image data is continuous. Consequently, there is a disparity in modeling approaches; watter2015embed and karl2016deep model the nature of the data with a (generative) discrete-time dynamical model, while yildiz2019ode model the continuous generating process with a continuous-time dynamical model. The related work of [chen2018neural]

facilitates estimation of continuous-time dynamics with neural networks by allowing for backpropagation through arbitrary ODE solvers.

The structure of the output space of a dynamical system can also be leveraged in learning [stewart2017label]. In [greydanus2019hamiltonian, toth2019hamiltonian, bertalan2019learning], the authors model the underlying dynamics of sequential data assuming the Hamiltonian structure. Dynamical state updates are generated using Hamilton’s equations. For high-dimensional data, greydanus2019hamiltonian and toth2019hamiltonian learn a map from the observation space to a low-dimensional phase space where Hamilton’s equations can be applied. A limitation of these approaches is that they are only applicable in the context of conservative systems. In [desmond2019symplectic], the authors surpass this limitation by assuming the Port-Hamiltonian structure, which can be used to model nonconservative systems.

, the authors assume the Lagrangian structure which allows for incorporation of nonconservative forces naturally. saemundsson2019variational and zhong2020unsupervised introduce generative models that leverage the variational auto-encoder (VAE) formulation to learn a representation of the low-dimensional state-space from high-dimensional images. saemundsson2019variational use a Gaussian prior on the latent code but set its dimension substantially higher than the number of degrees of freedom inherent to the system. This architectural choice limits interpretability of the learned coordinate representation and may have adverse effects in the control setting. In

[zhong2020unsupervised] (work concurrent to ours), the authors select the latent dimension according to the number of degrees of freedom in the system. They find that with this choice the standard Gaussian prior severely inhibits learning and instead choose to apply system specific priors on the latent code.

In this section, we provide a brief introduction to Lagrangian dynamics. For the sake of brevity, the exposition is kept terse; interested readers can find further details in [spong2008robot, goldstein2002classical].

where D:Q→Sn++ is the positive definite inertia matrix. The kinetic energy of any mechanical system with holonomic constraints satisfies the quadratic form (1) — see [spong2008robot] for examples. Hence, learning the quadratic form (1) allows us to embed more structure in our architecture without compromising the richness of the class of systems that can be addressed by our approach. Indeed, the quadratic form of the kinetic energy has also been adopted in SymODEN [desmond2019symplectic] and DeLaN [lutter2019deep]. With the kinetic and the potential energy introduced above, we can express the Lagrangian L as the difference between them:

where τ represents the generalized forces, which encapsulate the effect of exogenous influences on the evolution of the Lagrangian system. For systems for which the total energy is conserved, τ=0. However, the explicit presence of τ in our Lagrangian formalism allows us to handle non-conservative influences with ease, e.g., friction in the pendulum system.

where D(q) is the inertia matrix, C(q,˙q) is the Coriolis term, g(q):=∂V(q)∂q, and τ are the generalized forces.

Noting that D(q) is positive definite, we can solve for the acceleration ¨q:

This formulation differs from previous work [cranmer2020lagrangian] where neither the kinetic energy nor the potential energy are explicitly modelled and from [lutter2019deep] where the potential force is modelled instead of the potential energy. To ensure invertibility of the mass matrix Dθ we use an intermediate matrix Jθ of the same shape and compute Dθ by

In our experiments λ

is set to the dimension of the position vector

The parameters (θ,ϕ) of the system Lagrangian are estimated by iterative minimization of the mean absolute difference between ground truth position-velocity measurement sequences denoted Zn={zn1,…,znT}, with znt=(qnt,˙qnt) and n∈{1,…,N}, and predicted sequences ^Zn defined similarly. The minimization problem is given by

Predicted sequences are computed recursively from an initial ground truth measurement zn0 and the current values of θ and ϕ. Concretely, the predicted measurement ^znt+1 is computed from the preceding measurement ^znt with ^z0n:=z0n and the dynamical update ˙znt given by

The Coriolis term Cθ and potential force gϕ are discussed in the previous section. In our experiments we consider systems without external forces, that is τ=0, and perform numerical integration with the Euler method. Note that the use of more sophisticated numerical integrators, in particular variational integrators, would likely improve performance.

In this section we outline our approach for estimating the state-space representation and system Lagrangian from high-dimensional observations111Since we cannot perform velocity prediction from a single image we use observations which we define as image tuples.. Our prediction pipeline maps high-dimensional observations to a low-dimensional state-space representation whose structure is learned during the training phase. We predict future low-dimensional states using the Euler-Lagrange equations, then map the resulting sequence back to the observation space giving the predicted image sequence.

To compress and reconstruct observations of system trajectories given as temporal sequences of T high-dimensional observations Xn={xn0,…,xnT}, with n∈{0,…,N}, we use an auto-encoding neural network f=Dφ∘Eϕ, where Dφ and Eϕ are decoding and encoding networks respectively. We denote encoded observation sequences Zn={zn1,…,znT} and interpret znt=Eϕ(xnt) as a position-velocity measurement. Predicted sequences ^Zn={^zn1,…,^znT} are determined as described in the previous section.

The parameters (φ,ϕ) of the auto-encoding network and (θ,ψ) of the system Lagrangian are estimated jointly by iterative minimization of the three component loss function:

where Lae is the auto-encoding reconstruction loss:

and Llat is the distance between encoded and predicted sequences:

This formulation differs from previous work [greydanus2019hamiltonian] where a structural prior is imposed on the embedding space. In our experiments we set γ=0.1.

In this section we empirically validate the proposed approach. Toward this end, we perform an ablation study where components of the cost function are removed and a qualitative comparison of the results are presented. Specifically, we compare the following models:

In each model, we use a symmetric auto-encoding network to map high-dimensional observations to a low-dimensional state-space representation. The encoding network is a four layer neural network: three convolutional layers followed by a fully-connected layer (see Table 1); where convolutional layer is followed by a ReLU nonlinear unit. Both the inertia tensor and potential energy functions are parameterized by three layer fully-connected neural networks with 200 hidden units in each layer and tanh nonlinear units.

The pendulum dataset consists of N=10,000 trajectories. Each trajectory is comprised of T=10 observations and each observation is constructed by concatenating three sequential images along the channel dimension. We train on 8,000 of the 10,000 trajectories using the Adam optimizer [kingma2014adam] with a learning rate of 1×10−3 and weight decay of 1×10−5.

The Acrobot dataset consists of N=10,000 trajectories. Each trajectory is comprised of T=2 observations and each observation is constructed by concatenating three sequential images along the channel dimension. We train on 8,000 of the 10,000 trajectories using the Adam optimizer [kingma2014adam] with a learning rate of 1×10−4 and weight decay of 1×10−5.

Figures 2 and 3 present qualitative comparisons on randomly selected testset trajectories from the pendulum and Acrobot datasets. On both datasets LagNetViP is able to extrapolate beyond the last observation in the testset trajectory. Removing the reconstruction loss on the latent trajectory generated by the learned dynamics has the most disastrous effect on reconstruction quality. This is evident in the fact that LagNetViP-dyn is unable to provide reasonable reconstructions even within the range of the testset in some cases. LagNetViP-lat performs well within the testset range but is unable to extrapolate farther and LagNetViP-ae exhibits good performance but fails to out perform LagNetViP.

In this work, we introduce a video prediction model where equations of motion are explicitly constructed from learned representations of underlying physical quantities. The low-dimensional state-space representation and system Lagrangian are learned simultaneously. Images are mapped to and from the low-dimensional state-space by an auto-encoding network and initial states are integrated forward using the equations of motion determined by the system Lagrangian and Euler-Lagrange equations. The approach excels over the baseline model with strong reconstruction performance on the pendulum system and strong indications of possibility on the chaotic Acrobot system.

We thank Shinkyu Park, Desmond Zhong, David Isele and Patricia Posey for their insights. This research has been supported in part by ONR grant #N00014-18-1-2873 and by the School of Engineering and Applied Science at Princeton University through the generosity of William Addy ’82.