The development of machine learning in particular and artificial intelligent in general has been strongly conditioned by the lack of an appropriate interface layer between deduction, abduction and induction. In this work we extend traditional algebraic specification methods in this direction. Here we assume that such interface for AI emerges from an adequate Neural-Symbolic integration. This integration is made for universe of discourse described on a Topos governed by a many-valued Łukasiewicz logic. Sentences are integrated in a symbolic knowledge base describing the problem domain, codified using a graphic-based language, wherein every logic connective is defined by a neuron in an artificial network. This allows the integration of first-order formulas into a network architecture as background knowledge, and simplifies symbolic rule extraction from trained networks. For the train of such neural networks we changed the Levenderg-Marquardt algorithm, restricting the knowledge dissemination in the network structure using soft crystallization. This procedure reduces neural network plasticity without drastically damaging the learning performance, allowing the emergence of symbolic patterns. This makes the descriptive power of produced neural networks similar to the descriptive power of Łukasiewicz logic language, reducing the information lost on translation between symbolic and connectionist structures. We tested this method on the extraction of knowledge from specified structures. For it, we present the notion of fuzzy state automata, and we use automata behaviour to infer its structure. We use this type of automata on the generation of models for relations specified as symbolic background knowledge. 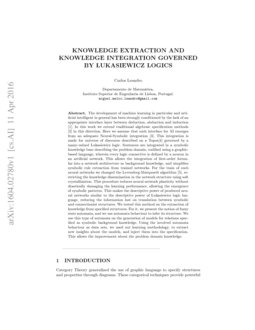 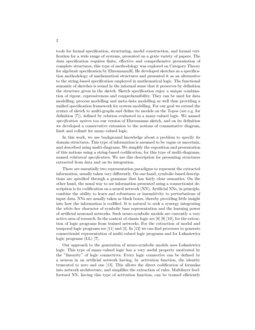 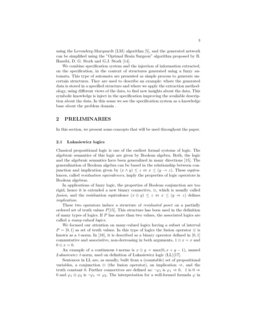 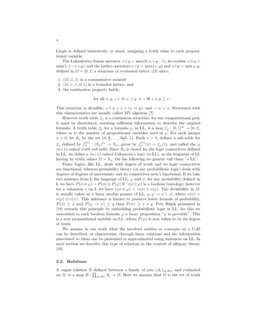 Category Theory generalized the use of graphic language to specify structures and properties through diagrams. These categorical techniques provide powerful tools for formal specification, structuring, model construction, and formal verification for a wide range of systems, presented on a grate variety of papers. The data specification requires finite, effective and comprehensive presentation of complete structures, this type of methodology was explored on Category Theory for algebraic specification by Ehresmann[Ehresm68]. He developed sketches as a specification methodology of mathematical structures and presented it as an alternative to the string-based specification employed in mathematical logic. The functional semantic of sketches is sound in the informal sense that it preserves by definition the structure given in the sketch. Sketch specification enjoy a unique combination of rigour, expressiveness and comprehensibility. They can be used for data modelling, process modelling and meta-data modelling as well thus providing a unified specification framework for system modelling. For our goal we extend the syntax of sketch to multi-graphs and define its models on the Topos (see e.g. for definition [Johnstone02]), defined by relation evaluated in a many-valued logic. We named specification system too our version of Ehresmanns sketch, and on its definition we developed a conservative extension to the notions of commutative diagram, limit and colimit for many-valued logic.

In this work, we use background knowledge about a problem to specify its domain structures. This type of information is assumed to be vague or uncertain, and described using multi-diagrams. We simplify the exposition and presentation of this notions using a string-based codification, for this type of multi-diagrams, named relational specification. We use this description for presenting structures extracted from data and on its integration.

There are essentially two representation paradigms to represent the extracted information, usually taken very differently. On one hand, symbolic-based descriptions are specified through a grammar that has fairly clear semantics. On the other hand, the usual way to see information presented using a connectionist description is its codification on a neural network (NN). Artificial NNs, in principle, combine the ability to learn and robustness or insensitivity to perturbations of input data. NNs are usually taken as black boxes, thereby providing little insight into how the information is codified. It is natural to seek a synergy integrating the white-box character of symbolic base representation and the learning power of artificial neuronal networks. Such neuro-symbolic models are currently a very active area of research. In the context of classic logic see [Bornscheuer98] [Hitzler04] [Holldobler00]

[Avila07] and [Avila08]. In [Komendantskaya07] we can find processes to generate connectionist representation of multi-valued logic programs and for Łukasiewicz logic programs (ŁL) [Klawonn92].

Our approach to the generation of neuro-symbolic models uses Łukasiewicz logic. This type of many-valued logic has a very useful property motivated by the ”linearity” of logic connectives. Every logic connective can be defined by a neuron in an artificial network having, by activation function, the identity truncated to zero and one

[Castro98]. This allows the direct codification of formulas into network architecture, and simplifies the extraction of rules. Multilayer feed-forward NN, having this type of activation function, can be trained efficiently using the Levenderg-Marquardt (LM) algorithm [HaganMenhaj99], and the generated network can be simplified using the ”Optimal Brain Surgeon” algorithm proposed by B. Hassibi, D. G. Stork and G.J. Stork [Hassibi93].

In this section, we present some concepts that will be used throughout the paper.

In applications of fuzzy logic, the properties of Boolean conjunction are too rigid, hence it is extended a new binary connective, ⊗, which is usually called fusion, and the residuation equivalence (x⊗y)≤z⇔x≤(y⇒z) defines implication.

These two operators induce a structure of residuated poset on a partially ordered set of truth values P[Jipsen03]. This structure has been used in the definition of many types of logics. If P has more than two values, the associated logics are called a many-valued logics.

We focused our attention on many-valued logics having a subset of interval P=[0,1] as set of truth values. In this type of logics the fusion operator ⊗ is known as a t-norm. In [Gerla00], it is described as a binary operator defined in [0,1] commutative and associative, non-decreasing in both arguments, 1⊗x=x and 0⊗x=0.

Sentences in ŁL are, as usually, built from a (countable) set of propositional variables, a conjunction ⊗ (the fusion operator), an implication ⇒, and the truth constant 0. Further connectives are defined as: ¬φ1 is φ1⇒0,1 is 0⇒0 and φ1⊕φ2 is ¬φ1⇒φ2. The interpretation for a well-formed formula φ in Łlogic is defined inductively, as usual, assigning a truth value to each propositional variable.

The Łukasiewicz fusion operator x⊗y=max(0,x+y−1), its residue x⊗y=min(1,1−x+y), and the lattice operators x∨y=max{x,y} and x∧y=minx,y, defined in Ω=[0,1] a structure of resituated lattice [Jipsen03] since:

This structure is divisible, x∧y=x⊗(x⇒y), and ¬¬x=x. Structures with this characteristics are usually called MV-algebras [Hajek98].

However truth table fφ is a continuous structure, for our computational goal, it must be discretized, ensuring sufficient information to describe the original formula. A truth table fφ for a formula φ, in ŁL, is a map fφ:[0,1]m→[0,1], where m is the number of propositional variables used in φ. For each integer n>0, let Sn be the set {0,1n,…,n−1n,1}. Each n>0, defines a sub-table for fφ defined by f(n)φ:(Sn)m→Sm, given by f(n)φ(¯v)=fφ(¯v), and called the φ (n+1)-valued truth sub-table. Since Sn is closed for the logic connectives defined in ŁL, we define a (n+1)-valued Łukasiewicz logic (n-ŁL), as the fragment of ŁL having by truth values Ω=Sn. On the following we generic call them ”a ŁL”.

\L the language of ŁL, φ and ψ, for any probability defined in \L we have P(ϕ⊕φ)=P(ϕ)⊕P(φ) if ¬(ϕ⊗φ) is a boolean tautology, however for a valuation v on \L we have v(ϕ⊕φ)=v(ϕ)⊕v(φ). The divisibility in Ω, is usually taken as a fuzzy modus ponens of ŁL, φ,φ→ψ⊢ψ, where v(ψ)=v(φ)⊗v(ψ). This inference is known to preserve lower formals of probability, P(ϕ)≥x and P(φ→ψ)≥y then P(ψ)≥x⊗y. Petr Hájek presented in [Hajek952] extends this principle by embedding probabilistic logic in ŁL, for this we associated to each boolean formula φ a fuzzy proposition ”φ is provable”. This is a new propositional variable on ŁL, where P(φ) is now taken to be its degree of truth.

We assume in our work what the involved entities or concepts on a UoD can be described, or characterize, through fuzzy relations and the information associated to them can be presented or approximated using sentences on ŁL. In next section we describe this type of relations in the context of allegory theory [Freyd90].

A vague relation R defined between a family of sets (Ai)i∈Att, and evaluated on Ω, is a map R:∏i∈AttAi→Ω. Here we assume that Ω is the set of truth values for a ŁL. In this case we named Att the set of attributes, where each index α∈Att, is called an attribute and the set indexed by i, Ai, represents the set of possible values for that attribute on the relation or its domain. In relation R every instance ¯x∈∏i∈AttAi, have associated a level of uncertainty, given by R(¯x), and interpreted as the truth value of proposition ¯x∈R, in Ω.

Every partition Atti∪Atta∪Atto=Att, where the sets of attributes Atti, Atta and Atto are disjoint, define a relation

and denoted by G:∏i∈AttiAi⇀∏i∈AttoAi, this type of relation we call a view for R. For each partition Atti∪Atta∪Atto=Att define a view G for R, where Atti and Atto are called, respectively, the set of G inputs and the set of its outputs. This sets are denoted, on the following, by I(G) and O(G). Graphically a view