State-of-the-art lane detection methods achieve successful performance. Despite their advantages, these methods have critical deficiencies such as the limited number of detectable lanes and high false positive. In especial, high false positive can cause wrong and dangerous control. In this paper, we propose a novel lane detection method for the arbitrary number of lanes using the deep learning method, which has the lower number of false positives than other recent lane detection methods. The architecture of the proposed method has the shared feature extraction layers and several branches for detection and embedding to cluster lanes. The proposed method can generate exact points on the lanes, and we cast a clustering problem for the generated points as a point cloud instance segmentation problem. The proposed method is more compact because it generates fewer points than the original image pixel size. Our proposed post processing method eliminates outliers successfully and increases the performance notably. Whole proposed framework achieves competitive results on the tuSimple dataset. 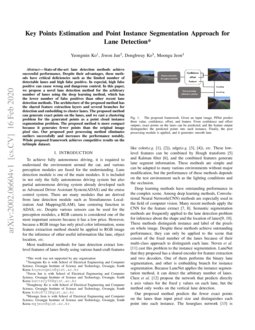 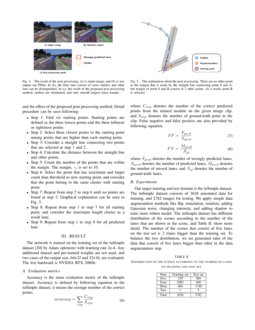 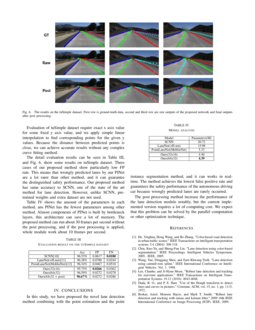 To achieve fully autonomous driving, it is required to understand the environment around the car, and various perception modules are fused for the understanding. Lane detection module is one of the main modules. It is included in not only the fully autonomous driving system but also partial autonomous driving system already developed such as Advanced Driver Assistant System(ADAS) and the cruise control system. There are many modules that are derived from lane detection module such as Simultaneous Localization And Mapping(SLAM), lane centering function in ADAS, etc. Despite various sensors can be used for the perception modules, a RGB camera is considered one of the most important sensors because it has a low price. However, because a RGB image has only pixel color information, some feature extraction method should be applied to RGB image for the inference of other useful information like lane, object location, etc.

. These low-level features can be combined by Hough transform [5] and Kalman filter [6], and the combined features generate lane segment information. These methods are simple and can be adapted to many various environments without major modification, but the performance of these methods depends on the test environment such as the lighting conditions and the occlusion.

Deep learning methods have outstanding performance in the complex scene. Among deep learning methods, Convolutional Neural Network(CNN) methods are especially used in the field of computer vision. Many recent methods apply the CNN for the feature extract [7, 8]. Semantic segmentation methods are frequently applied to the lane detection problem for inference about the shape and the location of lanes[9, 10]. These methods distinguish instance and label of the pixels on whole image. Despite these methods achieve outstanding performance, they can only be applied to the scene that consist of the fixed number of the lanes because of their multi-class approach to distinguish each lane. Neven

Our proposed method predicts the fewer exact points on the lanes than input pixel size and distinguishes each point into each instance. The hourglass network [13] is usually applied to the field of the key points estimation like pose estimation [14] and object detection [15, 16]. The hourglass network can extract information about various scales by sequences of down-sampling and up-sampling. If some hourglass networks are stacked, loss function can be applied to each stacked network, and it help more stable training. The instance segmentation methods in the field of the computer vision can generate clusters of the pixels that belong to each instance [17, 18].

Fig.1. shows the proposed framework for lane detection. It has three output branches and predicts the exact location and the instance features of the points on the lanes. More details are introduced Section II. In summary, there are primary contributions of this study: (1) We propose the novel method for the lane detection that has more compact output size than semantic segmentation based methods, and the compact size can save memory of the module. (2) The proposed post processing method can eliminate outliers successfully and increases the performance. (3) The proposed method can be applied to various scenes that include any oriented lanes like vertical or horizontal lane and the arbitrary number of lanes. (4) The evaluation result of the proposed method has lower false positive ratio than other method and the state-of-the-art accuracy performance, and it guarantee stability of the autonomous driving car.

We train a neural network for the lane detection. The network, which we will refer to as PINet, Point Instance Network, generates points on whole lane and distinguishes points into each instance. The loss function of this network is inspired from SPGN, Similarity Group Proposal Network[19] that is a instance segmentation framework for 3D points cloud. Unlike other instance segmentation methods in computer vision area, in our proposed method, embedding is needed for only the predicted points not the all pixels. In this respect, the 3D points cloud instance segmentation method is appropriate to our task. In addition, simple post processing method is adapted to raw outputs of the network. This post processing eliminates outliers of each predicted point, and make each lane more smooth. Section II-A introduces details of the main architecture and the loss function, and Section II-B introduces the proposed post processing method.

PINet generates points and distinguishes them into each instance. Fig.2. shows the detailed architecture of the proposed network. A input size is 512x256, and it is passed to a resizing layer and a feature extraction layer. The input data that has 512x256 size is compressed into a smaller size by a sequence of the convolution layers and the max pooling layers. In this study, we experiment two cases of the resized input size, 64x32 and 32x16. The feature extraction layer is inspired from the stacked hourglass network that achieves outstanding performance on the key point prediction. PINet includes two hourglass blocks for the feature extraction. Each block has three output branches, and output grid size is same to the resized input size. Fig.3. shows the detailed architecture about the hourglass block. In Fig.3, blue boxes denote down-sampling bottleneck layers, green boxes denote same bottleneck layers, and orange boxes denote up-sampling bottleneck layers. The detail of the resizing layer and each bottleneck layer can be seen at Table I. Batch normalization and Relu layers are applied after every convolutional layer except when they are applied at the end of the output branch. The number of filters in output branch is determined by the output values. For example, the confidence branch is 1, the offset branch is 2, and the feature branch is 4. Following detailed explanations include the role and the loss function of each output branch.

where Ne,Nn denote the number of grids that a point exist or non-exist in, G denotes a set of grids, gc denotes a confidence output of the grid, g∗c denotes the ground-truth, and γ denotes each coefficient.

Feature branch This branch is inspired from SGPN, a 3D points cloud instance segmentation method. The feature means an information about instance, and the branch is trained to make features of grid in the same instance more closer. Equation 3 and 4. shows the loss function of the feature branch.

where Cij indicate whether a point i and a point j are same instance, Fi denotes the predicted feature of point i by the proposed network, and K in constant such that K>0. If Cij=1, they are same instance, and if Cij=2, these points are in the different lane to each other. When the network is trained, the loss function makes feature more closer when two points belong to same instance, and distributes them when two points belong to different instance. We can distinguish points into each instance by the distance based simple clustering technique. The feature size is set to 4, and this size is observed to have no major effect for the performance.

The total loss Ltotal is equal to summation of the above three loss term, and whole network is trained by end-to-end procedure using the following total loss.

In training step, we set all coefficients 1.0 initially, and add 0.5 to a and γn

at last few epochs. The proposed loss function is adapted to the end of each hourglass block, and it help stable training for whole network.

The raw outputs of the network have some errors. For example, basically, a instance should consist of only one smooth lane. However, there are some outliers or other lane that can be distinguished visually. Fig 4. show this problem and the effect of the proposed post processing method. The detailed procedure can be seen following:

The network is trained on the training set of the tuSimple dataset [20] by Adam optimizer with learning rate 2e-4 initially. We train the network using the initial setup during the first 1000 epochs, and we set learning rate to 1e-4, a to 1.5, and γn to 1.5 during the last 200 epochs. Other hyper-parameters like the margin size of the post processing are determined by the experimental method. Optimized values of these hyper-parameters need to be modified slightly according to the training results. Any additional dataset and pre-trained weights are not used, and two cases of the output size, 64x32 and 32x16, are evaluated. The test hardward is NVIDIA RTX 2080ti.

Our target training and test domain is the tuSimple dataset. The tuSimple dataset consists of 3626 annotated data for training, and 2782 images for testing. We apply simple data augmentation methods like flip, translation, rotation, adding Gaussian noise, changing intensity, and adding shadow to train more robust model. The tuSimple dataset has different distribution of the scenes according to the number of the lanes that are shown in the scene, and Table II. show more detail. The number of the scenes that consist of five lanes on the test set is 2 times bigger than the training set. To balance the two distribution, we set generated ratio of the data that consist of five lanes bigger than other in the data augmentation step.

The evaluation of tuSimple dataset require exact x axis value for some fixed y axis value, and we apply simple linear interpolation to find corresponding points for the given y values. Because the distance between predicted points is close, we can estimate accurate results without any complex curve fitting method.

The detailed evaluation results can be seen in Table III, and Fig. 6. show some results on tuSimple dataset. Three cases of our proposed method show particularly low FP rate. This means that wrongly predicted lanes by our PINet are a lot rarer than other method, and it can guarantee the distinguished safety performance. Despite pre-trained weights and extra dataset are not used, our proposed method also outperforms other state of the art methods for the accuracy metric.

Table IV shows the amount of the parameters in each method, and it show that PINet is one of the lightest method among other method. Almost components of PINet is built by bottleneck layers, this architecture can save a lot of memory. The proposed method can run about 30 frames per second without the post processing, and if the post processing is applied, whole module works about 10 frames per second.

In this study, we have proposed the novel lane detection method combining with the point estimation and the point instance segmentation method, and it can works in real-time. The method achieves the lowest false positive rate and guarantees the safety performance of the autonomous driving car because wrongly predicted lanes are rarely occurred.

The post processing method increase the performance of the lane detection module notably, but the current implemented version requires a lot of computing cost. We expect that this problem can be solved by the parallel computation or other optimization technique.