A kernel density is an aggregate of kernel functions, which are itself densities and could be kernel densities. This is used to decompose a kernel into its constituent parts. Pearson's test for equality of proportions is applied to quantiles to test whether the component distributions differ from one another. The proposed methods are illustrated with a meta-analysis of the social cost of carbon. Different discount rates lead to significantly different Pigou taxes, but not different growth rates. Estimates have not varied over time. Different authors have contributed different estimates, but these differences are insignificant. Kernel decomposition can be applied in many other fields with discrete explanatory variables. 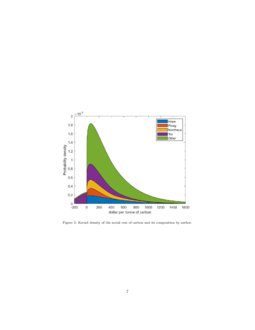 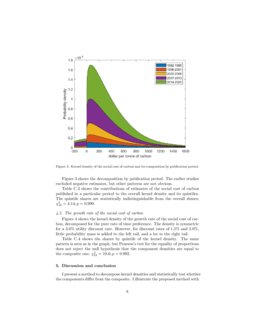 Multivariate Smoothing via the Fourier Integral Theorem and Fourier Kernel

Kernel Estimates as General Concept for the Measuring of Pedestrian Density

Everything about climate change is uncertain. Many estimates of the social cost of carbon have been published, and kernel densities have been used to visualize the uncertainty about the Pigou tax (Tol, 2018). I here propose a new method to decompose that uncertainty into discrete components, and a new statistical test for whether the components differ from one another.

Kernel densities are a useful tool to describe univariate data (Takezawa, 2005). Simple kernel regression is helpful for specifying the relationship between two variables (Altman, 1992), and kernel quantile regression can be used to show this relationship across the distribution (Yu and Jones, 1998). However, these methods are not suitable if the explanatory variable is categorical. The method proposed here works well for categorical data, and shows both central tendency and spread.

This paper extends previous meta-analyses of the social cost of carbon (Tol, 2005, 2018). The kernel function and bandwidth are the same as in the 2018 paper (see B), but there are now many more estimates (see A). My earlier papers used sample splits rather than decomposition and did not conduct statistical tests for differences. Wang et al. (2019) report a meta-analysis of 548 estimates of the social cost of carbon. I have 2786. They focus on the central tendency, while I consider the entire distribution. They assume linearity and normality. I do not.

The paper proceeds as follows. Section 2 presents the decomposition method, and Section 3 the appropriate hypothesis test. Section 4 applies these methods to estimates of the social cost of carbon and its growth rate. Section 5 concludes.

A kernel density is defined as

where xi are a series of observations, h is the bandwidth, and K is the kernel function. The kernel function is conventionally assumed to be a (i) non-negative (ii) symmetric function that (iii) integrates to one, with (iv) zero mean and (v)

. That is, any standardized symmetric probability density function can serve as a kernel function, and the Normal density is indeed a common choice.

Indeed, with the right weights and bandwidths, the weighted sum of the kernel densities of subsets of the data is identical to the kernel density of the whole data set. To see this, partition the observations into m subsets of length mj with ∑jmj=n, as x1,...xm1,xm1+1,...,xm1+m2,xm1+m2+1,...,xn. Then

I doubt I am the first to notice this, but as far as I know I am the first to write it up.555I searched Scopus for ”kernel decomposition”, ”composite kernel” and ”kernel mixture”. Cunningham and Williams (1994) show that a spectogram is the weighted sum of spectograms. Szymkowiak-Have et al. (2006)

decompose kernels by introducing a conditional variable (much like I do) but use this for spectral clustering rather than decomposition.

Note that kernel decomposition works with any set of weights that add to one; and with any kernel function or bandwidth for the subsets:

The decomposition of the kernel density by author opens another interpretation: Vote-counting (Laplace, 1814). Different experts have published different estimates of the social cost of carbon. These can be seen as votes for a particular Pigou tax. But as the experts are uncertain, they have voted for a central value and a spread. The kernel function is a vote, the kernel density adds those votes.666Note the difference with Bayesian updating, which multiplies rather than adds probabilities.

Different experts have cast different numbers of votes. Below, I count one paper as one vote. One can also argue that it should be one vote per expert, or that papers should be weighted by citations, journal prestige, or author pedigree. Composite kernel densities naturally allow for this, but it is a dangerous route to travel in this case.

Equation (3) holds that the kernel density f(x) is composed of m kernel densities fj(x) with weight mj/n. For each interval x––<x<¯x, we can test whether the shares of the component densities equal the overall weights, using the Equality of Proportions test by Pearson (1900). Such a test reveals whether a component density disproportionally contributes to, say, the left tail of the composite density.

If the intervals correspond to p

percentiles of the composite distribution, the test statistic is

Note that the test only works if there are two components or more, m≥2. If not, there would be nothing to compare. Note also that the distribution needs to be split in two quantiles or more, p≥2. This is because each component density adds up to its weight mj/n by construction.

Matlab codes to construct and decompose a kernel and test the decomposition are on GitHub.

4.1 The social cost of carbon

The social cost of carbon is the damage done, at the margin, by emitting more carbon dioxide into the atmosphere. If evaluated along the optimal emissions trajectory, the social cost of carbon equals the Pigou (1920) tax that internalizes the externality and restores the Pareto (1906) optimum. Climate change features high on the political and public agenda. Estimating the social cost of carbon is an intellectual challenge, requiring the projection of emissions, concentrations and climates over a long period of time, the estimation the effects of climate change, the valuation of a wide variety of impacts, the aggregation of impacts over people with a huge range of living standards, the consideration of large uncertainties and ambiguous knowledge, and the discounting of welfare in the distant future and over multiple generations (Tol, 2018).

Figure 1 decomposes the kernel density of the social cost of carbon into its components by pure rate of time preference used. Three choices of time preference are most common: 3.0%, 1.5% and 1.0%.888”Other” refers to a range of numbers and methods, but mostly constant consumption rates. As one would expect, the lower discount rates contribute more to the right tail of the distribution.

shows the contributions of estimates of the social cost of carbon using a particular pure rate of time preference to the overall kernel density (denoted ”null”) as well as to the five quintiles of that density (denoted Q1-5). The null hypothesis that all shares are equal is firmly rejected;

I split the sample into estimates by those who have published five papers or more (i.e., Christopher W. Hope, William D. Nordhaus, Frederick van der Ploeg, Richard S.J. Tol) and others.

Figure 2 decomposes the kernel density by author. Of the named authors, estimates by van der Ploeg are the narrowest, Tol contributes most to the left tail, and Hope to the right tail.

Table 2 shows the contributions of estimates of the social cost of carbon published by a particular author to the overall kernel density and its quintiles. Although there are patterns in figure and table, the quintile shares are statistically indistinguishable from the overall shares; χ216=19.2;p=0.260.

I split the sample into five periods. The key events are the Second Assessment Report of the Intergovernmental Panel on Climate Change, and the first IPCC report to discuss the economic impacts (Pearce et al., 1996), the Third Assessment Report of the IPCC (Smith et al., 2001), the Stern Review (Stern et al., 2006), and the Obama update of the social cost of carbon (on the Social Cost of Carbon, 2013).

Figure 3 shows the decomposition by publication period. The earlier studies excluded negative estimates, but other patterns are not obvious.

Table 3 shows the contributions of estimates of the social cost of carbon published in a particular period to the overall kernel density and its quintiles. The quintile shares are statistically indistinguishable from the overall shares; χ216=4.14;p=0.999.

4.5 The growth rate of the social cost of carbon

Figure 4 shows the kernel density of the growth rate of the social cost of carbon, decomposed for the pure rate of time preference. The density is symmetric for a 3.0% utility discount rate. However, for discount rates of 1.5% and 2.0%, little probability mass is added to the left tail, and a lot to the right tail.

Table 4 shows the shares by quintile of the kernel density. The same pattern is seen as in the graph, but Pearson’s test for the equality of proportions does not reject the null hypothesis that the component densities are equal to the composite one; χ224=10.6;p=0.992.

I present a method to decompose kernel densities and statistically test whether the components differ from the composite. I illustrate the proposed method with a meta-analysis of the social cost of carbon and its growth rate. As expected, a lower discount rate implies a statistically significantly higher Pigou tax; its growth rate is not affected by the discount rate. Earlier estimates of the social cost of carbon are not different from later estimates. There appears to be no learning over time. The null hypothesis that different authors publish similar estimates cannot be rejected. Published estimates are not marked by subjectivity.

The proposed method can be applied to any issue with categorical explanatory variables, such as the wages of men and women, energy use of home owners and renters, commuting times by public and private transport, exam scores by ethnicity, or projected corona virus deaths by political affiliation.

Appendix A New estimates of the social cost of carbon

All data to reproduce this paper are on GitHub.

Appendix B Bandwidth and kernel function

The choice of kernel function and bandwidth is key to any kernel density estimate, as illustrated in Figure 5

A conventional choice would be to use a Normal kernel function, with a bandwidth according to the Silverman rule, that is, 1.06 times the sample standard deviation divided by the number of observations raised to the power one-fifth. Figure

5 reveals two problems with this approach: The right tail is thin, and a large probability mass is assigned to negative social costs of carbon. If the bandwidth equals the sample standard deviation to reflect the wide uncertainty, the right tail appropriately thickens but the probability of a Pigou subsidy on greenhouse gas emissions increases too.

The studies that report the possibility of a negative social cost of carbon nonetheless argue in favour of a positive one. A symmetric Normal kernel does not reflect that. I therefore replace it with a Gumbel kernel, which is defined on the real line but right-skewed. Again, I use the mode as its central tendency. This thickens the right tail and thins the left tail.

A knotted Normal kernel is not only peculiar near zero but it also has a thin tail. I therefore replace it with a Weibull kernel, which is defined on the positive real line, near zero near zero, and right-skewed. I use the mode as its central tendency. The right tail of the kernel distribution thickens again. The Weibull-Gumbel kernel distribution is the default used here.

Code and data to reproduce this paper are on GitHub.