Extensive literature exists on how to test for normality, especially for identically and independently distributed (i.i.d) processes. The case of dependent samples has also been addressed, but only for scalar random processes. For this reason, we have proposed a joint normality test for multivariate time-series, extending Mardia's Kurtosis test. In the continuity of this work, we provide here an original performance study of the latter test applied to two-dimensional projections. By leveraging copula, we conduct a comparative study between the bivariate tests and their scalar counterparts. This simulation study reveals that one-dimensional random projections lead to notably less powerful tests than two-dimensional ones. 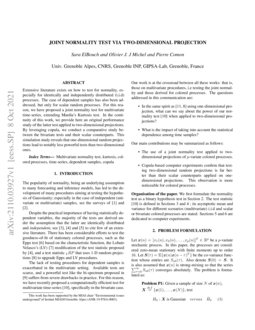 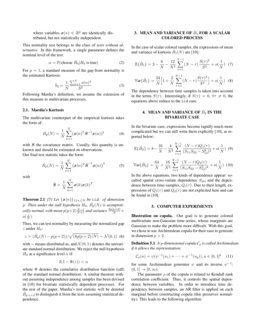 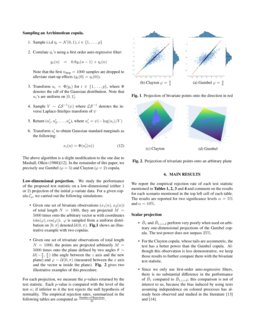 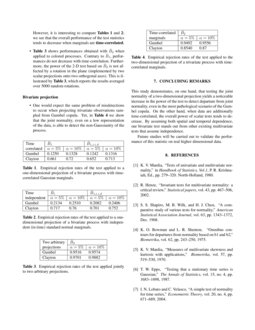 Most normality tests in the literature are performed for scalar and inde...
Sara Elbouch, et al. ∙

Exchangeability and the Cramér-Wold theorem

We propose a method of testing the shift between mean vectors of two mul...
Tzviel Frostig, et al. ∙

We investigate the problem of testing the global null in the high-dimens...
Yue Li, et al. ∙

The popularity of normality, being an underlying assumption to many forecasting and inference models, has led to the development of many procedures aiming at testing the hypothesis of Gaussianity; especially in the case of independent (univariate or multivariate) samples, see the surveys of [1] and [2].

Despite the practical importance of having statistically dependent variables, the majority of the tests are derived under the assumption that the latter are identically distributed and independent, see [3], [4] and [5] to cite few of an extensive literature. There has been considerable efforts to test the goodness-of-fit of stationary colored processes, such as the Epps test [6]

based on the characteristic function, the Lobato Velasco’s (LV)

modification of the test statistic proposed by

[4], and a test statistic kRP that uses 1-D random projections [8] to upgrade Epps and LV procedures.

The lack of testing procedures for dependent samples is exacerbated in the multivariate setting. Available tests are scarce, and a powerful test like the bi-spectrum proposed in [9] suffers from severe drawbacks in practice. For this reason, we have recently proposed a computationally efficient test for multivariate time-series [10], specifically in the bivariate case. Our work is at the crossroad between all these works: that is, those on multivariate procedures, i.e testing the joint normality and those derived for colored processes. The questions addressed in this communication are:

Our main contributions may be summarized as follows:

Organisation of the paper. We first formulate the normality test as a binary hypothesis test in Section 2. The test statistic [10] is defined in Sections 3 and 4

; its asymptotic mean and variance for different scenarios (multivariate) i.i.d and scalar or bivariate colored processes are stated. Sections

5 and 6 are dedicated to computer experiments.

-variate stochastic process. In this paper, the processes are considered zero-mean stationary with finite moments up to order

16. Let S(τ)=E{x(n)x(n−τ)T} be the co-variance function whose entries are Sab(τ). Also denote S(0)=S. It is also assumed that x(n) is strong-mixing so that the series ∑∞τ=0Sab(τ) converges absolutely. The problem is formulated as:

where variables x(n)∈Rp are identically distributed, but not statistically independent.

This normality test belongs to the class of tests without alternative. In this framework, a single parameter defines the nominal level of the test:

, a standard measure of the gap from normality is the estimated Kurtosis:

Following Mardia’s definition, we assume the extension of this measure to multivariate processes.

The multivariate counterpart of the empirical kurtosis takes the form of:

with S the covariance matrix. Usually, this quantity is unknown and should be estimated on observations. Our final test statistic takes the form:

. Then under the null hypothesis

Thus, we can test normality by measuring the normalized gap z under H0:

H0 at a significance level α if:

denotes the cumulative distribution function (cdf) of the standard normal distribution. A similar theorem without assuming independence among samples has been devised in

[10] for bivariate statistically dependent processes. For the rest of the paper, Mardia’s test statistic will be denoted ^Bp,i.i.d to distinguish it from the tests assuming statistical dependence.

3 Mean and variance of ^B1 for a scalar colored process

In the case of scalar colored samples, the expressions of mean and variance of kurtosis ^B1(N) are [10]:

The dependence between time samples is taken into account in the terms S(τ). Interestingly, if S(τ)=0,∀τ≠0, the equations above reduce to the i.i.d case.

4 Mean and variance of ^B2 in the bivariate case

In the bivariate case, expressions become rapidly much more complicated but we can still write them explicitly [10], as reported below:

In the above equations, two kinds of dependence appear: so-called spatial cross-variate dependence Sab, and the dependence between time-samples, Qi(τ). Due to their length, expressions of Q1(τ) and Q2(τ) are not explicited here and can be found in [10].

Our goal is to generate colored multivariate non-Gaussian time-series, whose marginals are Gaussian to make the problem more difficult. With this goal, we chose to use Archimedean copula for their ease to generate in dimension p>2.

A p-dimensional copula Cρ is called Archimedean if it allows the representation:

The parameter ρ of the copula is related to Kendall rank correlation coefficient. Thus, it controls the spatial dependence between variables. In order to introduce time dependency between samples, an AR filter is applied on each marginal before constructing copula (this preserves normality). This leads to the following algorithm:

The above algorithm is a slight modification to the one due to Mashall, Olkin (1988)[12]. In the remainder of this paper, we precisely use Gumbel (ρ=5) and Clayton (ρ=2) copula.

We study the performance of the proposed test statistic on a low-dimensional (either 1 or 2) projection of the initial p-variate data. For a given copula Cρ, we carried out the following simulations:

For each projection, we measure the p-values returned by the test statistic. Each p-value is compared with the level of the test α; if inferior to it the test rejects the null hypothesis of normality. The empirical rejection rates, summarized in the following tables are computed as Number of RejectionsM.

We report the empirical rejection rate of each test statistic mentioned in Tables 1, 2, 3 and 4 and comment on the results for each scenario mentioned in the top left cell of each table. The results are reported for two significance levels α=5% and α=10%.

This study demonstrates, on one hand, that testing the joint normality of a two-dimensional projection yields a noticeable increase in the power of the test to detect departure from joint normality, even in the most pathological scenario of the Gumbel copula. On the other hand, when data are additionally time-correlated, the overall power of scalar tests tends to decrease. By assuming both spatial and temporal dependence, our bivariate test stands out from other existing multivariate tests that assume independence.

Future studies will be carried out to validate the performance of this statistic on real higher dimensional data.