The Fourier Transform is one of the most important linear transformations used in science and engineering. Cooley and Tukey's Fast Fourier Transform (FFT) from 1964 is a method for computing this transformation in time O(nlog n). From a lower bound perspective, relatively little is known. Ailon shows in 2013 an Ω(nlog n) bound for computing the normalized Fourier Transform assuming only unitary operations on pairs of coordinates is allowed. The goal of this document is to describe a natural open problem that arises from this work, which is related to group theory, and in particular to representation theory. 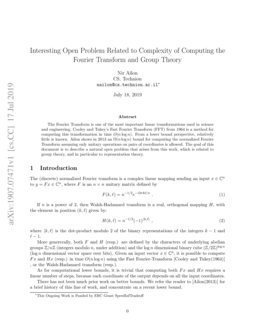 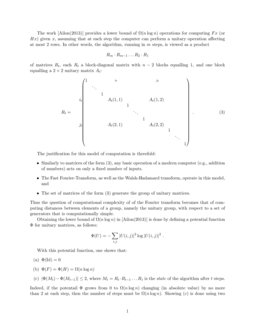 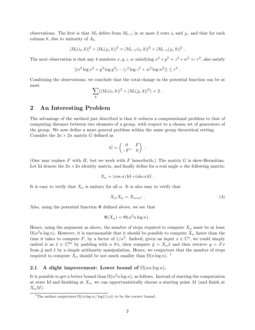 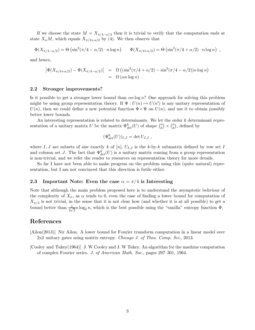 An Illustrated Introduction to the Truncated Fourier Transform

Pseudo-Bayesian Learning with Kernel Fourier Transform as Prior

We show the power of the algebra of subspace collections developed in Ch...
Graeme W. Milton, et al. ∙

As a generalization of the two-dimensional Fourier transform (2D FT) and...
Soo-Chang Pei, et al. ∙

The (discrete) normalized Fourier transform is a complex linear mapping sending an input x∈Cn to y=Fx∈Cn, where F is an n×nunitary matrix defined by

If n is a power of 2, then Walsh-Hadamard transform is a real, orthogonal mapping H, with the element in position (k,ℓ) given by:

where ⟨k,ℓ⟩ is the dot-product modulo 2 of the binary representations of the integers k−1 and ℓ−1.

More genererally, both F and H (resp.) are defined by the characters of underlying abelian groups Z/nZ (integers modulo n, under addition) and the logn dimensional binary cube (Z/2Z)logn (logn

dimensional vector space over bits). Given an input vector

x∈Cn, it is possible to compute Fx and Hx (resp.) in time O(nlogn) using the Fast Fourier-Transform [Cooley and Tukey(1964)] , or the Walsh-Hadamard transform (resp.).

As for computational lower bounds, it is trivial that computing both Fx and Hx requires a linear number of steps, because each coordinate of the output depends on all the input coordinates.

There has not been much prior work on better bounds. We refer the reader to [Ailon(2013)] for a brief history of this line of work, and concentrate on a recent lower bound.

The work [Ailon(2013)] provides a lower bound of Ω(nlogn) operations for computing Fx (or Hx) given x, assuming that at each step the computer can perform a unitary operation affecting at most 2 rows. In other words, the algorithm, running in m steps, is viewed as a product

of matrices Rt, each Rt a block-diagonal matrix with n−2 blocks equalling 1, and one block equalling a 2×2 unitary matrix At:

The justification for this model of computation is threefold:

Thus the question of computational complexity of of the Fourier transform becomes that of computing distances between elements of a group, namely the unitary group, with respect to a set of generators that is computationally simple.

Obtaining the lower bound of Ω(nlogn) in [Ailon(2013)] is done by defining a potential function Φ for unitary matrices, as follows:

With this potential function, one shows that:

Indeed, if the potentail Φ grows from 0 to Ω(nlogn) changing (in absolute value) by no more than 2 at each step, then the number of steps must be Ω(nlogn). Showing (c) is done using two observations. The first is that Mt defers from Mt−1 in at most 2 rows it and jt, and that for each column k, due to unitarity of At,

The next observation is that any 4 numbers x,y,z,w satisfying x2+y2=z2+w2=:r2, also satisfy

Combining the observations, we conclude that the total change in the potential function can be at most

The advantage of the method just described is that it reduces a computational problem to that of computing distance between two elements of a group, with respect to a chosen set of generators of the group. We now define a more general problem within the same group theoretical setting.

(One may replace F with H, but we work with F henceforth.) The matrix G

Id denote the 2n×2nidentity matrix, and finally define for a real angle α the following matrix:

Also, using the potential function Φ defined above, we see that

Hence, using the argument as above, the number of steps required to compute Xα must be at least Ω(α2nlogn). However, it is unreasonable that it should be possible to compute Xα faster than the time it takes to compute F, by a factor of 1/α2. Indeed, given an input x∈Cn, we could simply embed it as ~x∈C2n

n 0’s, then compute ~y=Xα~x and then retrieve y=Fx from ~y and ~x by a simple arithmetic manipulation. Hence, we conjecture that the number of steps required to compute Xα should be not much smaller than Ω(nlogn). 111The author conjectures Ω((nlogn)/log(1/α)) to be the correct bound.

It is possible to get a better bound than Ω(α2nlogn), as follows. Instead of starting the computation at state Id and finishing at Xα, we can opportunistically choose a starting point M (and finish at XαM).

If we choose the state M=Xπ/4−α/2 then it is trivial to verify that the computation ends at state XαM, which equals Xπ/4+α/2 by (4). We then observe that

Is it possible to get a stronger lower bound than αnlogn? One approach for solving this problem might be using group representation theory. If Ψ:U(n)↦U(n′) is any unitary representation of U(n), then we could define a new potential function Φ∘Ψ on U(n), and use it to obtain possibly better lower bounds.

where I,J are subsets of size exactly k of [n], UI,J is the k-by-k submatrix defined by row set I and column set J. The fact that Ψkdet(U) is a unitary matrix coming from a group representation is non-trivial, and we refer the reader to resources on representation theory for more details.

So far I have not been able to make progress on the problem using this (quite natural) representation, but I am not convinced that this direction is futile either.

2.3 Important Note: Even the case α=π/4 is Interesting

Note that although the main problem proposed here is to understand the asymptotic behviour of the complexity of Xα, as α tends to 0, even the case of finding a lower bound for computation of Xπ/4 is not trivial, in the sense that it is not clear how (and whether it is at all possible) to get a bound better than 12√2nlog2n, which is the best possible using the “vanilla” entropy function Φ.