In fact, there exist three genres of intelligence architectures: logics (e.g. Random Forest, A^* Searching), neurons (e.g. CNN, LSTM) and probabilities (e.g. Naive Bayes, HMM), all of which are incompatible to each other. However, to construct powerful intelligence systems with various methods, we propose the intelligence graph (short as iGraph), which is composed by both of neural and probabilistic graph, under the framework of forward-backward propagation. By the paradigm of iGraph, we design a recommendation model with semantic principle. First, the probabilistic distributions of categories are generated from the embedding representations of users/items, in the manner of neurons. Second, the probabilistic graph infers the distributions of features, in the manner of probabilities. Last, for the recommendation diversity, we perform an expectation computation then conduct a logic judgment, in the manner of logics. Experimentally, we beat the state-of-the-art baselines and verify our conclusions. 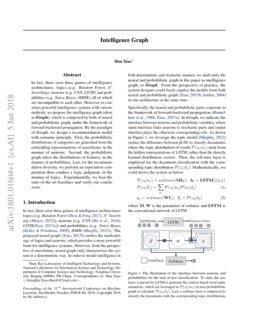 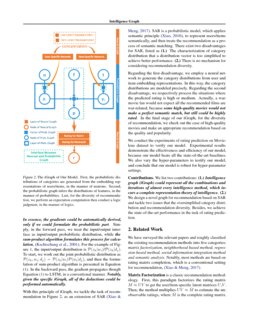 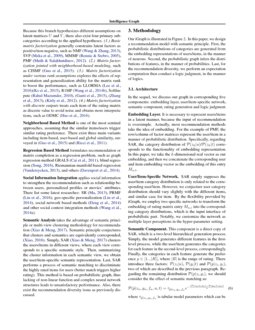 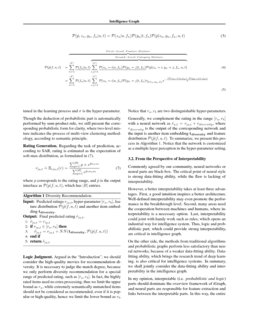 We use the algebraic framework for languages of infinite trees introduce...
Achim Blumensath, et al. ∙

A flexible framework for defeasible logics

Location recommendation is defined as to recommend locations (POIs) to u...
Chang Liu, et al. ∙

Monotonicity and Persistence in Preferential Logics

An important characteristic of many logics for Artificial Intelligence i...
J. Engelfriet, et al. ∙

In fact, there exist three genres of intelligence architectures: logics (e.g. Random Forest (Zhou & Feng, 2017), A∗ Searching (Munos, 2012)), neurons (e.g. CNN (He et al., 2016), LSTM(Xiao, 2017a)) and probabilities (e.g. Naive Bayes (Koller & Friedman, 2009), HMM (Murphy, 2012)). The proposed neural graph (Xiao, 2017b) unifies the methodology of logics and neurons, which provides a more powerful form for intelligence systems. However, from the perspective of uncertainty, neural graph only characterizes the system in a deterministic way. In order to model intelligence in both deterministic and stochastic manner, we shall unify the neural and probabilistic graph in this paper as intelligence graph, or iGraph. From the perspective of practice, the system designer could freely employ the models from both neural and probabilistic graph (Xiao, 2017b; Jordan, 2004) in one architecture at the same time.

Specifically, the neural and probabilistic parts corporate in the framework of forward-backward propagation, (Rumelhart et al., 1988; Xiao, 2017a). In iGraph, we indicate the interface between neurons and probabilistic variables, where input interface links neurons to stochastic parts and output interface plays the otherwise corresponding role. As shown in Figure 1, we leverage the topic model (Murphy, 2012)

(notice the difference between pLSI) to classify documents, where the topic distribution of words

stem from the hidden representations of LSTM, rather than the directly learned distribution vectors. Then, the soft-max layer is employed for the document classification with the corresponding topic distribution

P(zk|dj). Mathematically, we could derive the system as below:

where M,W is the parameter of softmax and LSTM is the conventional network of LSTM.

In essence, the gradients could be automatically derived, only if we could formulate the probabilistic part. Simply, in the forward pass, we treat the input/output interface as input/output probabilistic distribution, while the sum-product algorithm formulates this process for calculation, (Kschischang et al., 2001). For the example of Figure 1, the input/output distribution is P(zk|wi)/P(zk|dj). To start, we work out the joint probabilistic distribution as P(zk,wi,dj)=P(zk|wi)P(wi|dj), and then the formulation of sum-product algorithm is presented in Equation (1). In the backward pass, the gradient propagates though Equation (1) to LSTM, in a conventional manner. Notably, given the specific iGraph, all of the deductions could be performed automatically.

With this principle of iGraph, we tackle the task of recommendation in Figure 2, as an extension of SAR (Xiao & Meng, 2017). SAR is a probabilistic model, which applies semantic principle (Xiao, 2016), to represent users/items semantically, and then treats the recommendation as a process of semantic matching. There exist two disadvantages for SAR, listed as (1.) The characterization of category distribution that a distribution vector is too simplified to achieve better performance. (2.) There is no mechanism for considering recommendation diversity.

Regarding the first disadvantage, we employ a neural network to generate the category distributions from user and item embedding representations. In this way, the category distributions are modeled precisely. Regarding the second disadvantage, we respectively process the situations where the predicted rating is high or medium. Actually, a war-movie fan would not expect all the recommended films are war-related, because

We conduct the experiments of rating prediction on Movielens dataset to verify our model. Experimental results demonstrate the effectiveness and efficiency of our model, because our model beats all the state-of-the-art baselines. We also vary the hyper-parameters to testify our model, and conclude that our model is robust for hyper-parameter settings.

Contributions. We list two contributions: (1.) Intelligence graph (iGraph) could represent all the combinations and iterations of almost every intelligence method, which incurs a complete representation theory of intelligence. (2.) We design a novel graph for recommendation based on SAR and tackle two issues that the oversimplified category distribution and recommendation diversity. Besides, we achieve the state-of-the-art performance in the task of rating prediction.

We have surveyed the relevant papers and roughly classified the existing recommendation methods into five categories: matrix factorization, neighborhood based method, regression based method, social information integration method and semantic analysis. Notably, most methods are based on rating matrix completion, which is a conventional setting for recommendation, (Xiao & Meng, 2017).

Matrix Factorization is a classic recommendation methodology. First, this paradigm factorizes the rating matrix M≈UV to get the user/item-specific latent matrices U,V. Then, the method multiplies UV≈^M

to estimate the unobservable ratings, where

Neighborhood Based Method is one of the most seminal approaches, assuming that the similar items/users trigger similar rating preference. There exist three main variants including item-based, user-based and global similarity, surveyed in (Guo et al., 2015) and (Ricci et al., 2011).

Semantic Analysis takes the advantage of semantic principle or multi-view clustering methodology for recommendation (Xiao & Meng, 2017). Semantic principle conjectures that clusters and semantics are equivalently corresponded, (Xiao, 2016). Simply, SAR (Xiao & Meng, 2017) clusters the users/items in different views, where each view corresponds to a specific semantic style. Then, summarizing the cluster information in each semantic view, we obtain the user/item-specific semantic representation. Last, SAR performs a process of semantic matching to discriminate the highly rated items for users (better match triggers higher rating). This method is based on probabilistic graph, thus lacking of non-linear function and complex neural network structures leads to unsatisfactory performance. Also, there exist the recommendation diversity issue as previously discussed.

Embedding Layer. It is necessary to represent users/items in a latent manner, because the input of recommendation is oversimple. Actually, most recommendation methods take the idea of embedding. For the example of PMF, the row/column of factor matrices represent the user/item in a manner of probabilistic distribution. Specifically, regarding SAR, the category distribution of P(zk|u)/P(zk|t) corresponds to the functionality of embedding representation. In this paper, we take the k-dimensional real vector as our embedding, and then we concatenate the corresponding user and item embedding vector as the embedding of this entry Mu,t.

Semantic Component. This component is a direct copy of SAR, which is a two-level hierarchical generation process. Simply, the model generates different features in the first-level process, while the user/item generates the categories for each feature in the second-level process, correspondingly. Finally, the categories in each feature generate the preference p∈[1...|R|], where |R| is the range of rating. There introduce three factors: P(zi|u), P(yi|t) and P(p|zi,yi), two of which are described in the previous paragraph. Regarding the remaining distribution P(p|zi.yi), we should consider the the effect of semantic matching as:

where τ^p|zn,yn,fn is tabular model parameters which can be tuned in the learning process and σ is the hyper-parameter.

Though the deduction of probabilistic part is automatically performed by sum-product rule, we still present the corresponding probabilistic form for clarity, where two-level mixture indicates the process of multi-view clustering methodology, according to semantic principle.

Rating Generation. Regarding the task of prediction, according to SAR, rating is estimated as the expectation of soft-max distribution, as formulated in (7).

where p corresponds to the rating range, and ^p is the output interface as P(p|f,u,t), which has |R| entries.

Logic Judgment. Argued in the “Introduction”, we should consider the high-quality movies for recommendation diversity. It is necessary to judge the match degree, because we only perform diversity recommendation for a special range of predicted rating, such as [ra,rb]. In fact, the highly rated items need no extra processing, thus we limit the upper bound as ra, while extremely semantically unmatched items should not be considered as recommended, even if it is popular or high-quality, hence we limit the lower bound as rb. Notice that ra,rb are two distinguishable hyper-parameters.

Generally, we complement the rating in the range [ra,rb] with a neural network as ^ru,t=r|u,t+rdiversity, where rdiversity is the output of the corresponding network and the input is another item embedding tdiversity and feature distribution P(^p|f,u,t). To summarize, we present this process in Algorithm 1. Notice that the network is customized as a multiple layer perception in the hyper-parameter setting.

3.2 From the Perspective of Interpretability

Commonly agreed by our community, neural networks or neural parts are black-box. The critical point of neural style is strong data-fitting ability, while the flaw is lacking of interpretability.

In my opinion, interpretable (i.e. probabilistic and logic

) parts should dominate the overview framework of iGraph, and neural parts are responsible for feature extraction and links between the interpretable parts. In this way, the entire architecture is interpretable with strong data-fitting ability.

This section has not been ready in this version.

In this paper, we propose a complete representation theory of intelligence, as intelligence graph (iGraph). Based on this novel paradigm, we design a graph for recommendation to tackle two issues, that the oversimple category distribution and diversity recommendation. Experimental results demonstrate the effectiveness and efficiency of our model.