Influence of the Binomial Crossover on Performance of Evolutionary Algorithms

In differential Evolution (DE) algorithms, a crossover operation filtering variables to be mutated is employed to search the feasible region flexibly, which leads to its successful applications in a variety of complicated optimization problems. To investigate whether the crossover operator of DE is helpful to performance improvement of evolutionary algorithms (EAs), this paper implements a theoretical analysis for the (1+1)EA_C and the (1+1)EA_CM, two variants of the (1+1)EA that incorporate the binomial crossover operator. Generally, the binomial crossover results in the enhancement of exploration and the dominance of transition matrices under some conditions. As a result, both the (1+1)EA_C and the (1+1)EA_CM outperform the (1+1)EA on the unimodal OneMax problem, but do not always dominate it on the Deceptive problem. Finally, we perform an exploration analysis by investigating probabilities to transfer from non-optimal statuses to the optimal status of the Deceptive problem, and propose adaptive parameter settings to strengthen the promising function of binomial crossover. It suggests that incorporation of the binomial crossover could be a feasible strategy to improve the performances of EAs. 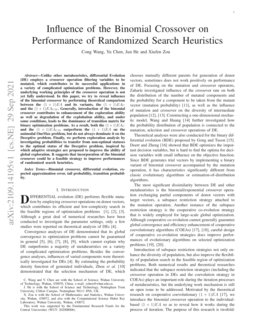 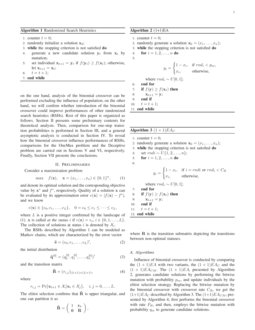 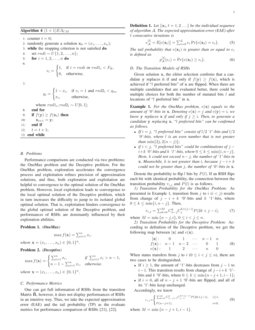 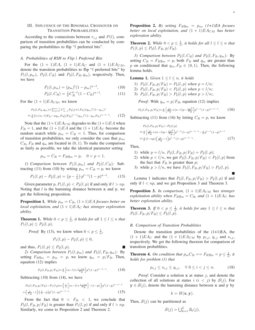 An Experimental Study of Adaptive Control for Evolutionary Algorithms

The balance of exploration versus exploitation (EvE) is a key issue on e...
Giacomo di Tollo, et al. ∙

Evolutionary algorithms (EAs) demonstrate competitive performance on a large variety of complicated optimization problems, however, the efficiency deteriorates significantly with the increase of both the dimension and the size of feasible region. To further improve the performance of EAs on large-scale optimization problems, the co-evolution strategy is incorporated to develop efficient cooperative coevolutionary algorithms (COEAs) [1, 2].

Careful design of cooperative co-evolution strategies does improve performances of EAs on complicated optimization problems, even though cooperative co-evolution cannot generally guarantee global convergence of COEAs [3, 4]. Both exploitation and exploration could be enhanced by stepwise evolution of varied portions of the decision variables, which could be regarded as a subspace-restricted searching strategy imposed on the feasible region of an optimization problem.

Another instance of the subspace-restricted searching strategy is the crossover-assisted mutation employed in differential evolution (DE) algorithms. Crossover operations applied to donor vectors leads to changes of a portion of the decision variables, which contributes its efficient and low-complexity search in the feasible regions of optimization problems

[5, 6, 7]. Despite the excellent performance of DEs on various optimization problems, convergence analyses also demonstrated that its global convergence cannot be guaranteed in general [8, 9, 10, 11, 12].

An interesting question then arises: could the crossover operation employed in DEs be helpful to performance improvement of EAs? Both numerical results and theoretical researches indicated that the subspace-restricted searching strategies play an important role during the iteration processes of metaheuristics, but the underlying working mechanism is still an open issue to be addressed. Motivated by the theoretical research on cooperative coevolutionary (1+1)EA [3], we introduce the binomial crossover operation to the individual-based (1+1)EA so as to reveal how it works during the process of iteration. The purpose of this research is twofold: on the one hand, analysis of the binomial crossover can be performed excluding the influence of population; on the other hand, we will confirm whether introduction of the binomial crossover could improve performances of EAs. Rest of this paper is organized as follows. Section II reviews theoretical studies of DEs, and some preliminary contents for theoretical analysis are presented in Section III. Then, the influence of the binomial crossover on transition probabilities is investigated in Section IV, and Section V conducts the analysis on asymptotic performance of EAs. To reveal how the binomial crossover works on performance of EAs for consecutive iterations, the OneMax problem and the Deceptive problem are investigated in Sections VI and VII, respectively. Finally, Section VIII presents the conclusions and discussions.

Although numerical investigations of DEs have been widely conducted, only a few theoretical studies paid attention to components of DEs [13]

. By estimating the probability density function of generated individuals, Zhou

et al. [14] demonstrated that the selection mechanism of DE, which chooses mutually different parents for generation of donor vectors, sometimes does not work positively on performance of DE. Focusing on the mutation and crossover operators, Zaharie [15, 16, 17] investigated influence of the crossover rate on both the distribution of the number of mutated components and the probability for a component to be taken from the mutant vector, as well as the influence of mutation and crossover on the diversity of intermediate population. Wang and Huang [18]

attributed the DE to a one-dimensional stochastic model, and investigated how the probability distribution of population is connected to the mutation, selection and crossover operations of DE.

Theoretical analysis was also conducted for the binary differential evolution (BDE) proposed by Gong and Tuson [19]. By investigating the expected runtime of BDE, Doerr and Zheng [20] showed that BDE optimizes the important decision variables, but is hard to find the optima for decision variables with small influence on the objective function. Since BDE generates trial vectors by implementing a binary variant of binomial crossover accompanied by the mutation operation, it has characteristics significantly different from classic EAs or estimation-of-distribution algorithms.

The runtime of metaheuristics quantifies computational budget needed to achieve a given approximation precision, whereas the average convergence rate (ACR) and the expected approximation error (EAE) evaluate the performances of EAs for consecutive iterations [21, 22, 23]. He and Lin [21] revealed the relation between the ACR and the spectral radius of the transition matrix, by which the asymptotic performance of an EA can be connected to the spectral radius of its transition matrix. Wang et al. [23] proposed a general framework to estimate the EAE of elitist EAs, by which the EAE can be obtained for given iteration budget.

and denote its optimal solution and the corresponding objective value by x∗ and f∗, respectively. Then, quality of a solution x can be evaluated by its approximation error e(x)=|f(x)−f∗|. Due to the finiteness of the feasible region of (1), values of e(x) are located in a finite set:

where L is a positive integer confirmed by the landscape of (1). x is called at the status i if e(x)=ei, i∈{0,1,…,L}, and we denote the collection of solutions at status i by Xi.

under the premise that all random numbers follows the uniform distribution.

and the transition matrix

Recalling that the solutions are updated by the elitist selection, we know ~R is upper triangular, and one can partition it as

Performance comparisons are conducted via the uni-modal OneMax problem and the multi-modal Deceptive problem.

Iii-C The Transition Models of EAs

By elitist selection, a candidate y replaces a solution x if and only if f(y)≥f(x), which is achieved if “l preferred bits” of x are changed. If there are multiple solutions that is better than x, there could be multiple choices for both the number of mutated bits l and the location of “l preferred bits”.

For the OneMax problem, e(x) equals to the amount of ‘0’-bits in x. Denoting e(x)=j and e(y)=i, we know y replaces x if and only if j≥i. Then, to generate a candidate y replacing x, “l preferred bits” can be confirmed as follows.

According to definition of the Deceptive problem, we get the following map from |x| to e(x).

Transition from status j to status i (0≤i<j≤n) is attributed to one the following cases.

Let A and B be two EAs with an identical initialization mechanism. ~A=(ai,j) and ~B=(bi,j) are the transition matrices of A and B, respectively. It is said that ~A dominates ~B, denoted by ~A⪰~B, if it holds that

Let {xt,t=1,2…} be the individual sequence of algorithm A. The expected approximation error (EAE) after t consecutive iterations is

Iv Influence of the Binomial Crossover on Exploration and Exploitation

Note that the (1+1)EACM degrades to the (1+1)EA when FR=1, and the (1+1)EA and the (1+1)EAC become the random search while pm=CR=1. Thus, we assume that pm, CR, FR and qm are located in (0,1), and the fair comparison of transition probabilities is made with the identical parameter setting

Given parameter p, P1(l,p)<P2(l,p) if and only if l>np. Note that l is the hamming distance between x and y. By replacing the bitwise mutation with the binomial crossover, the ability of exploration of the (1+1)EAC is enhanced at the expense of degradation of the exploitation ability. For the case that p≤1n, we get the following theorem on increase of probabilities to flip “l” bits.

From the fact that 0<FR<1, we conclude that P3(l,FR,p/FR) is greater than P1(l,p) if and only if l>np. That is, the introduction of the binomial crossover in the (1+1)EA leads to the enhancement of exploration ability of the (1+1)EACM. Similarly, we get the following theorem for the case that p≤1n.

The result can be obtained directly from equation (17) by setting p≤1n. ∎

By setting CR=FRqm=p, both FR and qm are greater than p on conditioned that qm,FR∈(0,1). Then, the following lemma holds.

Lemma 1 indicates that P3(l,FR,p/FR)>P2(l,p) if and only if l<np, which demonstrates that the (1+1)EACM can exploit the local region better by incorporating the binomial crossover and the bitwise mutation together. For the case that p≤1n, we get the following theorem by applying Lemma 1.

The result can be obtained by considering the second result of Lemma 1 for any 1≤l≤n. ∎

Denote the transition probabilities of the (1+1)EA, the (1+1)EAC and the (1+1)EACM by pi,j, qi,j and si,j, respectively. For the OneMax problem and the Deceptive problem, we get the relation of transition dominance on the premise that pmCR=FRqm=p≤1n.

Denote the collection of all solutions at status k by S(k), k=0,1,…,n. We prove the result to consider the transition probability

Since the function values of solutions are only related to the number of ‘1’-bits, the probability to generate a solution y∈S(i) by performing mutation on x∈S(j) is only dependent on the hamming distance

Given x∈Sj, S(i) can be partitioned as

Accordingly, the probability to transfer from status j to i is confirmed as

Then, we get the result by Definition 3. ∎

[Comparison of transition probabilities for the OneMax problem] Let pm=CR=FRqm=p≤1n. By (6), we have

[Comparison of transition probabilities for the Deceptive problem] Let pm=CR=FRqm=p≤1n. Equation (8) implies that

V Analysis of the Asymptotic Performance

It is well-known that excellent performance of EAs is due to good balance between exploration and exploitation. Does the increase of transition probabilities necessarily leads to improvement on performances of EAs? To answer this question, we first investigate the asymptotic performances of EAs for sufficiently large iteration budget t.

[21, Theorem 1] Let R be the transition submatrix associated with a convergent EA. Under random initialization (all statuses are generated with positive probabilities), it holds

where ρ(R) is the spectral radius of R.

From the fact that the transition submatrix R of an RSH is upper triangular, we conclude

Then, equation (34) implies that

By Proposition 1 we get the following theorem for comparison on the asymptotic performances of the (1+1)EA, (1+1)EAC and (1+1)EACM.

While CR=pm=FRqm=p≤1n, there exists T>0 such that

The proof can be completed by applying (20) to Proposition 1. ∎

On condition that CR=pm=FRqm=p≤1n, Theorem 5 indicates that after sufficiently many number of iterations, the (1+1)EAC can performs best for problem (1), and (1+1)EACM can get better performances than (1+1)EA. Then, what if the iteration budget is not sufficiently large?

In this section, we show that the outperformance introduced by the binomial crossover can be obtained for the unimodel OneMax problem, which is based on the following lemma [23].

For the EAs investigated in this study, satisfaction of conditions (36)-(38) is due to the monotonicity of transition probabilities.