In this paper, we investigate the sample complexity of policy evaluation in infinite-horizon offline reinforcement learning (also known as the off-policy evaluation problem) with linear function approximation. We identify a hard regime dγ^2>1, where d is the dimension of the feature vector and γ is the discount rate. In this regime, for any q∈[γ^2,1], we can construct a hard instance such that the smallest eigenvalue of its feature covariance matrix is q/d and it requires Ω(d/γ^2(q-γ^2)ε^2exp(Θ(dγ^2))) samples to approximate the value function up to an additive error ε. Note that the lower bound of the sample complexity is exponential in d. If q=γ^2, even infinite data cannot suffice. Under the low distribution shift assumption, we show that there is an algorithm that needs at most O(max{‖θ^π‖ _2^4/ε^4logd/δ,1/ε^2(d+log1/δ)}) samples (θ^π is the parameter of the policy in linear function approximation) and guarantees approximation to the value function up to an additive error of ε with probability at least 1-δ. 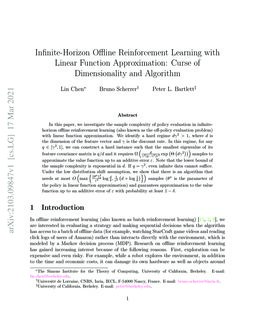 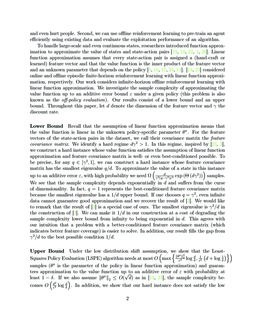 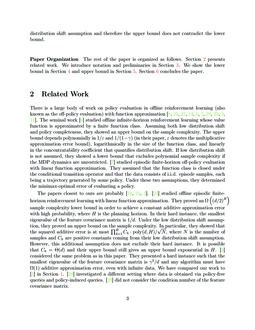 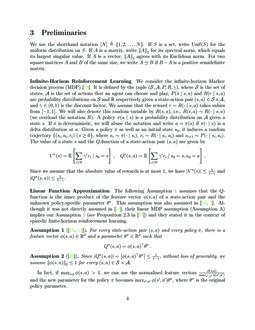 , we are interested in evaluating a strategy and making sequential decisions when the algorithm has access to a batch of offline data (for example, watching StarCraft game videos and reading click logs of users of Amazon) rather than interacts directly with the environment, which is modeled by a Markov decision process (MDP). Research on offline reinforcement learning has gained increasing interest because of the following reasons. First, exploration can be expensive and even risky. For example, while a robot explores the environment, in addition to the time and economic costs, it can damage its own hardware as well as objects around and even hurt people. Second, we can use offline reinforcement learning to pre-train an agent efficiently using existing data and evaluate the exploitation performance of an algorithm.

Recall that the assumption of linear function approximation means that the value function is linear in the unknown policy-specific parameter θπ. For the feature vectors of the state-action pairs in the dataset, we call their covariance matrix the feature covariance matrix. We identify a hard regime dγ2>1. In this regime, inspired by [23, 3], we construct a hard instance whose value function satisfies the assumption of linear function approximation and feature covariance matrix is well- or even best-conditioned possible. To be precise, for any q∈[γ2,1], we can construct a hard instance whose feature covariance matrix has the smallest eigenvalue q/d. To approximate the value of a state in this instance up to an additive error ε, with high probability we need Ω(dγ2(q−γ2)ε2exp(Θ(dγ2))) samples. We see that the sample complexity depends exponentially in d and suffers from the curse of dimensionality. In fact, q=1 represents the best-conditioned feature covariance matrix because the smallest eigenvalue has a 1/d upper bound. If one chooses q=γ2, even infinite data cannot guarantee good approximation and we recover the result of [3]. We would like to remark that the result of [3] is a special case of ours. The smallest eigenvalue is γ2/d in the construction of [3]. We can make it 1/d in our construction at a cost of degrading the sample complexity lower bound from infinity to being exponential in d. This agrees with our intuition that a problem with a better-conditioned feature covariance matrix (which indicates better feature coverage) is easier to solve. In addition, our result fills the gap from γ2/d to the best possible condition 1/d.

Under the low distribution shift assumption, we show that the Least-Squares Policy Evaluation (LSPE) algorithm needs at most O(max{∥θπ∥42ε4logdδ,1ε2(d+log1δ)}) samples (θπ is the parameter of the policy in linear function approximation) and guarantees approximation to the value function up to an additive error of ε with probability at least 1−δ. If we also assume ∥θπ∥2≤O(√d) as in [13, 23], the sample complexity becomes O(d2ε4logdδ). In addition, we show that our hard instance does not satisfy the low distribution shift assumption and therefore the upper bound does not contradict the lower bound.

There is a large body of work on policy evaluation in offline reinforcement learning (also known as the off-policy evaluation) with function approximation [8, 25, 27, 14, 6, 7, 28, 23, 3, 21]. The seminal work [6] studied offline infinite-horizon reinforcement learning whose value function is approximated by a finite function class. Assuming both low distribution shift and policy completeness, they showed an upper bound on the sample complexity. The upper bound depends polynomially in 1/ε and 1/(1−γ) (in their paper, ε denotes the multiplicative approximation error bound), logarithmically in the size of the function class, and linearly in the concentratability coefficient that quantifies distribution shift. If low distribution shift is not assumed, they showed a lower bound that excludes polynomial sample complexity if the MDP dynamics are unrestricted. [7] studied episodic finite-horizon off-policy evaluation with linear function approximation. They assumed that the function class is closed under the conditional transition operator and that the data consists of i.i.d. episode samples, each being a trajectory generated by some policy. Under these two assumptions, they determined the minimax-optimal error of evaluating a policy.

The papers closest to ours are probably [28, 23, 3]. [23] studied offline episodic finite-horizon reinforcement learning with linear function approximation. They proved an Ω((d/2)H) sample complexity lower bound in order to achieve a constant additive approximation error with high probability, where H is the planning horizon. In their hard instance, the smallest eigenvalue of the feature covariance matrix is 1/d. Under the low distribution shift assumption, they proved an upper bound on the sample complexity. In particular, they showed that the squared additive error is at most ∏Hh=1Ch⋅poly(d,H)/√N, where N is the number of samples and Ch are positive constants coming from their low distribution shift assumption. However, this additional assumption does not exclude their hard instance. It is possible that Ch=Θ(d) and their upper bound still gives an upper bound exponential in H. [3] considered the same problem as in this paper. They presented a hard instance such that the smallest eigenvalue of the feature covariance matrix is γ2/d and any algorithm must have Ω(1) additive approximation error, even with infinite data. We have compared our work to [3] in Section 1. [28] investigated a different setting where data is obtained via policy-free queries and policy-induced queries. [28] did not consider the condition number of the feature covariance matrix.

for the uniform distribution on

for its spectral norm, which equals its largest singular value. If

A is a vector, ∥A∥2 agrees with its Euclidean norm. For two square matrices A and B of the same size, we write A⪯B if B−A is a positive semidefinite matrix.

We consider the infinite-horizon Markov decision process (MDP) [18]. It is defined by the tuple (S,A,P,R,γ), where S is the set of states, A is the set of actions that an agent can choose and play, P(¯s∣s,a) and R(r∣s,a)

are probability distributions on

. We will also denote this random variable by

The following Assumption 1 assumes that the Q-function is the inner product of the feature vector ϕ(s,a) of a state-action pair and the unknown policy-specific parameter θπ. This assumption was also assumed in [16, 3]. Although it was not directly assumed in [13], their linear MDP assumption (Assumption A) implies our Assumption 1 (see Proposition 2.3 in [13]) and they stated it in the context of episodic finite-horizon reinforcement learning.

For every state-action pair (s,a) and every policy π, there is a feature vector ϕ(s,a)∈Rd and a parameter θπ∈Rd such that

In fact, if maxs,aϕ(s,a)>1, we can use the normalized feature vectors ϕ(s,a)maxs′,a′ϕ(s′,a′) and the new parameter for the policy π becomes maxs′,a′ϕ(s′,a′)θπ, where θπ is the original policy parameter.

In offline reinforcement learning, rather than interacts with the MDP directly, the agent has access to a batch of samples {(si,ai,ri,¯si)∣i∈[N]}, where (si,ai) are i.i.d. samples from a distribution μ on S×A, ri∼R(⋅∣si,ai), and ¯si∼P(⋅∣si,ai). Given a policy π, we are interested in evaluating the value Vπ(s) of a state under this policy approximately, using samples from μ. If our problem satisfies Assumption 1, the feature covariance matrix of μ [23, 3] is defined by

We require that the feature covariance matrix be well-conditioned (the smallest eigenvalue of Λ is lower bounded), which indicates that μ has a good feature coverage. In our hard instance to be presented in Section 4, the smallest eigenvalue satisfies λmin(Λ)=q/d, where q can be any value on [γ2,1]. Note that under Assumption 2, λmin(Λ) is at most 1/d. To see this, we compute the trace tr(Λ)=E(s,a)∼μ[tr(ϕ(s,a)ϕ(s,a)⊤)]=E(s,a)∼μ[tr(ϕ(s,a)⊤ϕ(s,a))]≤1. Since tr(Λ)≥dλmin(Λ), we get λmin(Λ)≤1/d. In other words, λmin(Λ)=1/d is the best possible condition.

In this section, we present our lower bound on the sample complexity of infinite-horizon offline reinforcement learning with linear function approximation. Recall that d is the dimension in linear function approximation and γ is the discount rate. Inspired by [3, 23], we can construct a hard instance provided that dγ2>1. In the assumption of our lower bound theorem below (Theorem 1), we require that d be a multiple of ⌈b/γ2⌉ for some constant b>1. If dγ2>1, there exists b>1 such that d≥b/γ2. Then Theorem 1 gives an at least exponential, and potentially infinite, lower bound of sample complexity, depending on the condition number (the smallest eigenvalue of the feature covariance matrix, i.e., λmin(Λ)) that we would like to achieve. In other words, we suffer from the curse of dimensionality. Therefore, we can say that the regime where dγ2>1 is a hard regime.

Let Id denote the set of all infinite-horizon MDPs that satisfy Assumption 1 and Assumption 2 and whose feature vectors have dimension d, rewards lie in [−1,1]. Let Mλ(S,A) denote the set of all probability measures on S×A such that the feature covariance matrix Λ has smallest eigenvalue at least λ. Fix b>1 and q∈[γ2,1]. For any dimension d which is a multiple of ⌈b/γ2⌉ (thus db,γ≜d⌈b/γ2⌉ is a positive integer), if 0<δ<1/4, we have

with probability at least δ, where N is the number of samples from μ and ^V is a real-valued function with N samples as input.

In the proof of Theorem 1, we present a hard instance with only one action such that the smallest eigenvalue of the feature covariance matrix Es∼μ[ϕ(s)ϕ(s)⊤] is qd. For this instance, any algorithm requires

samples in order to approximate the value of a state up to an additive error ε with probability at least 1−δ. This lower bound for sample complexity follows directly from Equation 1.

The feature vectors of the states in group B and C have unit norm: ∥ϕl,i∥2=1 for i∈[m] and ∥ϕl,0∥2=1√m⋅√m=1. Those in group A have norm ∥∥ϕ(s′l,i)∥∥2=γ<1. We are in a position to compute the feature covariance matrix

where Id is the d×didentity matrix.

Using Lemma 5.1 in [4], we have any algorithm outputs an incorrect Q(sL−1,0) from the two choices 0 and 2ε with probability at least

where N0 is the number of samples of s0,i (i∈[M]). Since only p/L of samples from μ are s0,i, any algorithm outputs an incorrect Q(sL−1,0) with probability at least

In this section, we show that under the low distribution shift assumption, the Least-Squares Policy Evaluation approximates the value function up to any given additive error bound ε with O(max{∥θπ∥42ε4logdδ,dε2}) samples. Suppose that the samples that the agent has access to are {(si,ai,ri,¯si)∣i∈[N]}, where (si,ai)∼μ, ri∼R(⋅∣si,ai) and ¯si∼P(⋅∣si,ai). We would like to approximate the value of state s0. Recall the feature covariance matrix Λ≜E(s,a)∼μ[ϕ(s,a)ϕ(s,a)⊤]. Define ~ϕ(s)≜Ea∼π(⋅∣s)ϕ(s,a), ¯Λ0≜~ϕ(s0)~ϕ(s0)⊤, and

If Assumption 3 is fulfilled, the following theorem presents an upper bound on the sample complexity of approximating the value of a state up to additive error bound ε. See our discussion in Remark 5. Recall that in Theorem 1, we show that there is an instance with λmin(Λ)=γ2/d for which evaluating a state up to a constant additive error is impossible (see also [3]). This suggests that if λmin(Λ)≤γ2, it is generally impossible to approximate the value of a state. If λmin(Λ)>γ2, there exists C∈(0,1/γ2) such that 1/γ2>C>1/λmin(Λ). As a result, we have CΛ⪰Id⪰¯Λ and CΛ⪰Id⪰¯Λ0 and therefore Assumption 3 holds (with C0=C). Thus our upper bound covers all cases in the regime λmin(Λ)>γ2. Note that Assumption 3 may also cover some cases in the regime λmin(Λ)≤γ2.