Bounded Max-Sum (BMS) is a message-passing algorithm that provides approximation solution to a specific form of de-centralized coordination problems, namely Distributed Constrained Optimization Problems (DCOPs). In particular, BMS algorithm is able to solve problems of this type having large search space at the expense of low computational cost. Notably, the traditional DCOP formulation does not consider those constraints that must be satisfied(also known as hard constraints), rather it concentrates only on soft constraints. Hence, although the presence of both types of constraints are observed in a number of real-world applications, the BMS algorithm does not actively capitalize on the hard constraints. To address this issue, we tailor BMS in such a way that can deal with DCOPs having both type constraints. In so doing, our approach improves the solution quality of the algorithm. The empirical results exhibit a marked improvement in the quality of the solutions of large DCOPs. 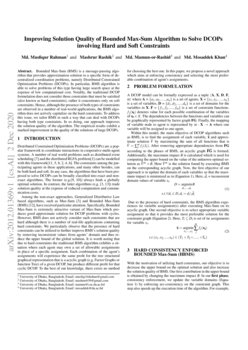 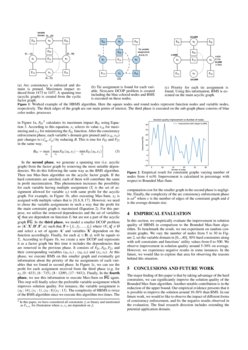 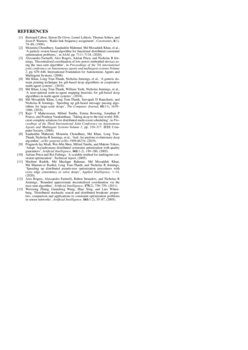 . The constraints among the participating agents in these applications, and many other besides, can be both hard and soft. In any case, the algorithms that have been proposed to solve DCOPs can be broadly classified into exact and non-exact algorithms. The former (e.g.

Among the non-exact approaches, Generalized Distributive Law based algorithms, such as Max-Sum [farinelli2008decentralised] and Bounded Max-Sum (BMS) [rogers2011bounded], have received particular attention. Specifically, Bounded Max-Sum is extremely attractive variant of Max-Sum which produces good approximate solution for DCOP problems with cycles. However, BMS does not actively consider such constraints that are hard although there is a number of real-life applications containing hard constraints. We particularly observe that the presence of hard constraints can be utilized to further improve BMS’s solution quality by removing inconsistent values from agents’ domain and thus reduce the upper bound of the global solution. It is worth noting that due to hard constraints the traditional BMS algorithm exhibits a situation where each agent may own a set of allowable assignments in place of a specific assignment. Each combination of the agent’s assignments will experience the same profit for the tree structured graphical representation that is a acyclic graph (e.g. Factor Graphs or Junction Tree) of a given DCOP, but produce different profit for that cyclic DCOP. To the best of our knowledge, there exists no method for choosing the best one. In this paper, we propose a novel approach which aims at enforcing consistency and selecting the most preferable combination of agent’s assignments.

Within this model, the main objective of DCOP algorithms such as BMS, is to find the assignment of each variable, ~x and approximate solution ~V by maximizing the sum of all functions that is ~V=∑mjfj(~xi). After removing appropriate dependencies from FG according to the phases of BMS, an acyclic graph ¯¯¯¯¯¯¯¯¯FG is formed. Additionally, the maximum impact B is calculated which is used for computing the upper bound on the value of the unknown optimal solution as ~Vm+B. Here ~Vm is the solution found by executing BMS on the corresponding acyclic graph. Now, the first objective of our approach is to update the domain of each variables so that the maximum impact is minimized as in (Equation 1). Here, ~di = inconsistent domain values of variable xi.

Due to the presence of hard constraints, the BMS algorithm experiences tie variable assignment(s) after executing Max-Sum on its acyclic graph. Our second objective is to select appropriate variable assignment so that it provides the most preferable solution for the constraint graph (Equation 2). Here, Ti⊆Di is set of tie assignments for variable xi.

With the motivation of utilizing hard constraints, our objective is to decrease the upper bound on the optimal solution and also increase the solution quality of BMS. Our first contribution in the upper bound is obtained by changing the maximum impact B. In our first phase, consistency enforcement, we update the variable domains (Equation 1) by enforcing arc-consistency on the constraint graph. This step also speeds up the execution time of the algorithm. For example, in Figure 0(a), F01111In this paper, we have considered all constraints fi as binary and mentioned as Fxi,xj for illustration where xi,xj are dependent on fi calculates its maximum impact B01 using Equation 3. According to this equation, x1 selects its value x1h for maximizing and x1l for minimizing the F01 function. After the consistency enforcement phase, each variable’s domain gets pruned and (x1h,x1l) pair changes to (x′1h,x′1l) by reducing B. This is true for F03 and F23 in the same way.

In the second phase, we generate a spanning tree (i.e. acyclic graph) from the factor graph by removing the most suitable dependencies. We do this following the same way as the BMS algorithm. Then run Max-Sum algorithm on the acyclic factor graph. If the hard constraints are satisfied, each of them will contribute the same in profit maximization. This phenomenon increases the possibility for each variable having multiple assignment (Ti is the set of assignment allowed for variable xi) with same profit for the acyclic graph. For example, in Figure 0(b), after executing Max-Sum, x2 is assigned with multiple values that is {0,6,8,17}. However, we need to chose the variable assignments in such a way that the profit for the main constraint graph is maximized (Equation 2). For this purpose, we utilize the removed dependencies and the set of variables xci that are dependent on function Fi but are not a part of the acyclic graph ¯¯¯¯¯¯¯¯¯FG. In the third phase, we model a smaller DCOP problem as ⟨A′,X′,D′,F′,α⟩ such that, F = {f1,f2,....,fk} where ∀Fi,xci≠\O and select a set of agents A′ and variables X′ dependent on the function accordingly. Finally, for each di∈D, di will be equals to Ti. According to Figure 0(b), we create a new DCOP and represents it as a factor graph but this time it includes the dependencies that are removed in the previous phase. It consists of F01,F03,F23 and their corresponding variables (x0,x1) , (x0,x3) and (x2,x3). At this phase, we execute BMS on this smaller graph and eventually get information about the priority of the tie assignments of each variables that we found in second phase. In Figure 0(c), we can see the profit for each assignment received from the third phase (e.g. for x2,(0:633),(6:715),(8:1209),(17:943)). Finally, In the fourth phase, we use this information to execute Max-Sum on ¯¯¯¯¯¯¯¯¯FG again. This step will finally select the preferable variable assignment which improves solution quality. For instance, the variable assignment is (x0:14),(x1:1),(x2:8)(x3:13). The complexity of HBMS is twice of the BMS algorithm since we execute this algorithm two times. The computation cost for the smaller graph in the second phase is negligible. Finally, the complexity of the arc consistency enforcement phase is ed3 where e is the number of edges of the constraint graph and d is the average domain size.

In this section, we empirically evaluate the improvement in solution quality of HBMS in comparison to the Bounded Max-Sum algorithm. To benchmark the result, we run experiment on random constraint graphs. We vary the number of nodes from 5 to 30 in Figure 2, set the variable domain in [0,..,40], 30% hard constraints along with soft constraints and functions’ utility values from 0 to 500. We observe improvement in solution quality around 5-30% on average. However, we experience negative results in some instances. In the future, we would like to explore that area for observing the reasons behind this situation.

The major finding of this paper is that by taking advantage of the hard constraints, we can significantly improve the solution quality of the Bounded Max-Sum algorithm. Another notable contribution is in the reduction of the upper bound. Our empirical evidence presents that it is possible to improve the solution around 10-30% than BMS. In our future work, we would to like to observe the impact of different forms of consistency enforcement, and fix the negative results observed in the evaluation. The final research direction includes extending the potential application domain.