Neural Turing Machines (NTMs) are an instance of Memory Augmented Neural Networks, a new class of recurrent neural networks which decouple computation from memory by introducing an external memory unit. NTMs have demonstrated superior performance over Long Short-Term Memory Cells in several sequence learning tasks. A number of open source implementations of NTMs exist but are unstable during training and/or fail to replicate the reported performance of NTMs. This paper presents the details of our successful implementation of a NTM. Our implementation learns to solve three sequential learning tasks from the original NTM paper. We find that the choice of memory contents initialization scheme is crucial in successfully implementing a NTM. Networks with memory contents initialized to small constant values converge on average 2 times faster than the next best memory contents initialization scheme. 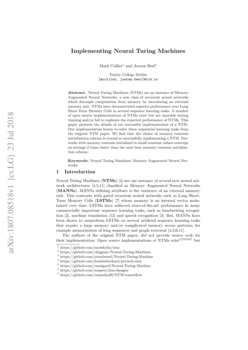 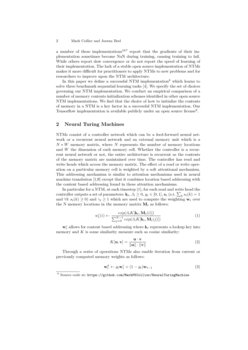 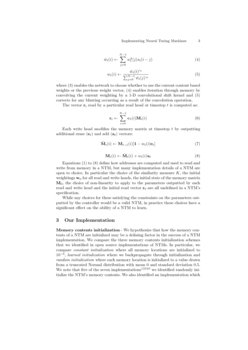 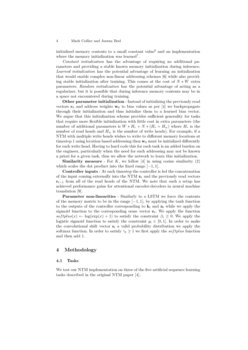 whose memory is an internal vector maintained over time. LSTMs have achieved state-of-the-art performance in many commercially important sequence learning tasks, such as handwriting recognition

[2], machine translation [12] and speech recognition [3]. But, MANNs have been shown to outperform LSTMs on several artificial sequence learning tasks that require a large memory and/or complicated memory access patterns, for example memorization of long sequences and graph traversal [4, 5, 6, 11].

In this paper we define a successful NTM implementation888Source code at: https://github.com/MarkPKCollier/NeuralTuringMachine which learns to solve three benchmark sequential learning tasks [4]

N∗W memory matrix, where N represents the number of memory locations and W

the dimension of each memory cell. Whether the controller is a recurrent neural network or not, the entire architecture is recurrent as the contents of the memory matrix are maintained over time. The controller has read and write heads which access the memory matrix. The effect of a read or write operation on a particular memory cell is weighted by a soft attentional mechanism. This addressing mechanism is similar to attention mechanisms used in neural machine translation

In particular for a NTM, at each timestep (t), for each read and write head the controller outputs a set of parameters: kt, βt≥0, gt∈[0,1], st (s.t. ∑kst(k)=1 and ∀k st(k)≥0) and γt≥1 which are used to compute the weighting wt over the N memory locations in the memory matrix Mt as follows:

Through a series of operations NTMs also enable iteration from current or previously computed memory weights as follows:

where (3) enables the network to choose whether to use the current content based weights or the previous weight vector, (4) enables iteration through memory by convolving the current weighting by a 1-D convolutional shift kernel and (5) corrects for any blurring occurring as a result of the convolution operation.

The vector rt read by a particular read head at timestep t is computed as:

Each write head modifies the memory matrix at timestep t by outputting additional erase (et) and add (at) vectors:

While any choices for these satisfying the constraints on the parameters outputted by the controller would be a valid NTM, in practice these choices have a significant effect on the ability of a NTM to learn.

where we backpropagate through initialization and

W∗Hr+N∗(Hr+Hw) where Hr is the number of read heads and Hw is the number of write heads). For example, if a NTM with multiple write heads wishes to write to different memory locations at timestep 1 using location based addressing then w0 must be initialized differently for each write head. Having to hard code this for each task is an added burden on the engineer, particularly when the need for such addressing may not be known a priori for a given task, thus we allow the network to learn this initialization.

Similarity measure - For K, we follow [4] in using cosine similarity (2) which scales the dot product into the fixed range [−1,1].

Controller inputs - At each timestep the controller is fed the concatenation of the input coming externally into the NTM xt and the previously read vectors rt−1 from all of the read heads of the NTM. We note that such a setup has achieved performance gains for attentional encoder-decoders in neural machine translation [9].

Parameter non-linearities - Similarly to a LSTM we force the contents of the memory matrix to be in the range [−1,1], by applying the tanh function to the outputs of the controller corresponding to kt and at

while we apply the sigmoid function to the corresponding erase vector

a valid probability distribution we apply the softmax function. In order to satisfy

γt≥1 we first apply the softplus function and then add 1.

We test our NTM implementation on three of the five artificial sequence learning tasks described in the original NTM paper [4].

Copy - for the Copy task, the network is fed a sequence of random bit vectors followed by an end of sequence marker. The network must then output the input sequence. This requires the network to store the input sequence and then read it back from memory. In our experiments we train and test our networks on 8-bit random vectors with sequences of length sampled uniformly from [1,20].

Repeat Copy - similarly to the Copy task, with Repeat Copy the network is fed an input sequence of random bit vectors. Unlike the Copy task, this is followed by a scalar that indicates how many times the network should repeat the input sequence in its output sequence. We train and test our networks on 8-bit random vectors with sequences of length sampled uniformly from [1,10] and number of repeats also sampled uniformly from [1,10].

Associative Recall - Associative Recall is also a sequence learning problem with sequences consisting of random bit vectors. In this case the inputs are divided into items, with each item consisting of 3 x 6-dimensional vectors. After being fed a sequence of items and an end of sequence marker, the network is then fed a query item which is an item from the input sequence. The correct output is the next item in the input sequence after the query item. We train and test our networks on sequences with the number of items sampled uniformly from [2,6].

In all of our experiments for each network we run training 10 times from different random initializations. To measure the learning speed, every 200 steps during training we evaluate the network on a validation set of 640 examples with the same distribution as the training set.

For all tasks the MANNs had 1 read and 1 write head, with an external memory unit of size 128 X 20 and a LSTM controller with 100 units. The controller outputs were clipped elementwise to the range (−20,20). The LSTM networks were all a stack of 3 X 256 units. All networks were trained with the Adam optimizer [8] with learning rate 0.001 and on the backward pass gradients were clipped to a maximum gradient norm of 50 as described in [10].

Repeat Copy - As per [4], we also find that the LSTM performs better relative to the MANNs on Repeat Copy compared to the Copy task, converging only 1.44 times slower than a NTM, perhaps due to the shorter input sequences involved (Fig. 5). While both the DNC and the NTM demonstrate slow learning during the first third of training both architectures then rapidly fall to near zero error before the LSTM. Despite the NTM learning slower than the DNC during early training, the DNC converges to near zero error just 1.06 times faster than the NTM.

Associative Recall - Our NTM implementation converges to zero error in a number of steps almost identical to the best published results on this task [4] and at the same rate as the DNC (Fig. 6). The LSTM network fails to solve the task in the time provided.

NTMs are an exciting new neural network architecture that achieve impressive performance on a range of artificial tasks. But the specification of a NTM leaves many free choices to the implementor and no source code is provided that makes these choices and replicates the published NTM results. In practice the choices left to the implementor have a significant impact on the ability of a NTM to learn. We observe great diversity in how these choices are made amongst open source efforts to implement a NTM, many of which fail to replicate these published results.

This publication emanated from research conducted with the financial support of Science Foundation Ireland (SFI) under Grant Number 13/RC/2106.