Detecting refactorings in commit history is essential to improve the comprehension of code changes in code reviews and to provide valuable information for empirical studies on software evolution. Several techniques have been proposed to detect refactorings accurately at the granularity level of a single commit. However, refactorings may be performed over multiple commits because of code complexity or other real development problems, which is why attempting to detect refactorings at single-commit granularity is insufficient. We observe that some refactorings can be detected only at coarser granularity, that is, changes spread across multiple commits. Herein, this type of refactoring is referred to as coarse-grained refactoring (CGR). We compared the refactorings detected on different granularities of commits from 19 open-source repositories. The results show that CGRs are common, and their frequency increases as the granularity becomes coarser. In addition, we found that Move-related refactorings tended to be the most frequent CGRs. We also analyzed the causes of CGR and suggested that CGRs will be valuable in refactoring research. 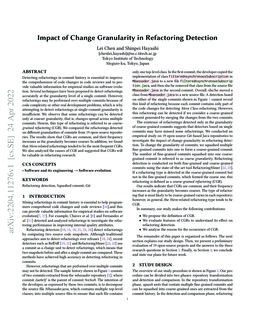 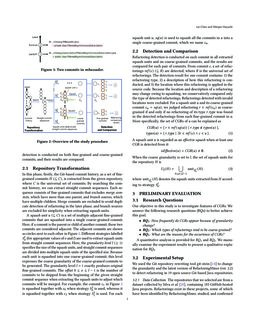 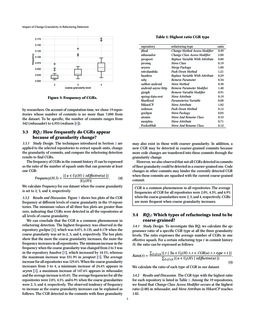 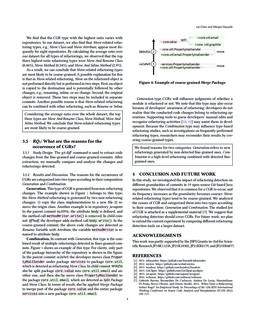 Microservice Transition and its Granularity Problem: A Systematic Mapping Study

However, refactorings that are performed over multiple commits may not be detected. The sample history shown in Figure 1 consists of two commits extracted from the mbassador repository (mba, 2012), where commit 2ae0e5f is the parent of commit 9ce3ceb. The intention of the developer, as expressed by these two commits, is to decompose the source file Mbassador.java, which contains multiple top-level classes, into multiple source files to ensure that each file contains only one top-level class. In the first commit, the developer copied the implementation of class FilteredAsynchronousSubscription in Mbassador.java to a new file FilteredAsynchronousSubscription.java, and then she/he removed that class from the source file Mbassador.java in the second commit. Overall, she/he moved a class from Mbassador.java to a new source file. A detection based on either of the single commits shown in Figure 1 cannot reveal this kind of refactoring because each commit contains only part of the code changes for detecting Move Class refactoring. However, this refactoring can be detected if we consider a coarse-grained commit generated by merging the changes from the two commits.

Our results indicate that CGRs are common, and their frequency increases as the granularity becomes coarser. The type of refactoring that is most likely to be coarse-grained varies in each repository; however, in general, the Move-related refactoring type tends to be CGR.

In summary, our study makes the following contributions:

The remainder of this paper is organized as follows. The next section explains our study design. Then, we present a preliminary evaluation of 19 open-source projects and the answers to the three research questions in Section 3. Finally, in Section 4, we conclude and state our plans for future work.

The overview of our study procedure is shown in Figure 2. Our procedure can be divided into two phases: repository transformation and detection and comparison. In the repository transformation phase, squash units that contain multiple fine-grained commits and can be squashed into coarse-grained ones are extracted from the commit history. In the detection and comparison phase, refactoring detection is conducted on both fine-grained and coarse-grained commits, and their results are compared.

In this phase, firstly, the Git-based commit history, as a set of fine-grained commits H (⊆C), is extracted from the given repository, where C is the universal set of commits. By searching the commit history, we can extract straight commit sequences. Each sequence consists of fine-grained commits that excludes merge commits, which have more than one parent, and branch sources, which have multiple children. Merge commits are excluded to avoid duplicate detection of refactoring in the later phase, and branch sources are excluded for simplicity when extracting squash units.

A squash unit u is regarded as an effective squash when at least one CGR is detected from it:

When the coarse granularity is set to l, the set of squash units for the repository H is

where unitSlo(H) denotes the squash units extracted from H according to strategy Slo.

Our objective in this study is to investigate features of CGRs. We answer the following research questions (RQs) to better achieve this goal.

A quantitative analysis is provided for RQ1 and RQ2. We manually examine the experiment results to present a qualitative explanation for RQ3.

We used the Git repository rewriting tool git-stein (Hayashi, 2018) to change the granularity and the latest version of RefactoringMiner (ver. 2.2) to detect refactoring in 19 open source Git-based Java repositories.

The repositories that we selected are from a dataset collected by Silva et al. (Silva et al., 2016), containing 185 GitHub-hosted Java projects. Refactorings exist in these projects, some of which have been identified by RefactoringMiner, studied, and confirmed by researchers. On account of computation time, we chose 19 repositories whose number of commits is no more than 7,000 from the dataset. To be specific, the number of commits ranges from 342 (mbassador) to 6,955 (redisson (red, 2014)).

3.3. Rq1: How frequently do CGRs appear because of granularity change?

The techniques introduced in Section 2 are applied to the selected repositories to extract squash units, change the granularity of commits, and compare the refactoring detection results to find CGRs.

The frequency of CGRs in the commit history H can be expressed as the ratio of the number of squash units that can generate at least one CGR:

We calculate Frequency for our dataset when the coarse granularity is set to 2, 3, and 4, respectively.

However, we also observed that not all CGRs detected in commits of finer granularity could be detected in a coarser-grained one. Code changes in other commits may hinder the currently detected CGR when those commits are squashed with the current coarse-grained commit.

3.4. Rq2: Which types of refactorings tend to be coarse-grained?

To investigate this RQ, we calculate the appearance ratio of a specific CGR type at all the three granularity levels. The ratio expresses the average number of CGRs in one effective squash. For a certain refactoring type t in commit history H, the ratio can be expressed as follows:

We calculate the ratio of each type of CGR in our dataset.

The CGR type with the highest ratio for each repository is listed in Table 1. Among the 19 repositories, we found that Change Class Access Modifier occurs at the highest ratio (2.00) in mbassador, and Move Attribute in HikariCP reaches 1.82.

We find that the CGR type with the highest ratio varies with repositories. In our dataset, we also find that Move-related refactoring types, e.g., Move Class and Move Attribute, appear most frequently for eight repositories. By calculating the average ratio over our dataset for all types of refactorings, we observed that the top three highest-ratio refactoring types were Move And Rename Class (0.46%), Move Method (0.34%), and Move And Inline Method (2.9%).

Considering the average ratio over the whole dataset, the top three types are Move And Rename Class, Move Method, Move And Inline Method. We conclude that Move-related refactoring types are most likely to be coarse-grained.

3.5. Rq3: What are the reasons for the occurrence of CGRs?

The git diff command is used to extract code changes from the fine-grained and coarse-grained commits. After extraction, we manually compare and analyze the changes and refactorings detected.

The reasons for the occurrence of CGRs are categorized into two types according to their composition: Generation and Combination.

Generation. This type of CGR is generated from non-refactoring changes. The example shown in Figure 1 belongs to this type; the Move Method refactoring is generated by two non-refactoring changes: 1) copy the class implementation to a new file 2) remove the origin class. Another example is in repository javapoet. In the parent commit 6a3595c, the attribute body is defined, and the method call methodWriter.write() is removed. In child commit 4ff9adf, the developer adds method call body.write(). In the coarse-grained commit, the above code changes are detected as Rename Variable with Attribute; the variable methodWriter is renamed to attribute body.

Generation type CGRs will influence judgments of whether a module is refactored or not. We note that this type may also occur because of developers’ awareness of refactoring; developers do not realize that the conducted code changes belong to refactoring operations. Supporting tools to guess developers’ manual edits and recognize refactoring activities (Foster et al., 2012; Ge and Murphy-Hill, 2014) may assist them in development. Because the Combination type may influence type-based refactoring studies, such as investigations on frequently-performed refactoring types, researchers may reconsider their results by covering coarse-grained types.

In this study, we investigated the impact of refactoring detection on different granularities of commits in 19 open source Git-based Java repositories. We observed that it is common for a CGR to occur, and its frequency increases as the granularity becomes coarser. Move-related refactoring types tend to be coarse-grained. We analyzed the causes of CGR and categorized them into two types according to their composition: Generation and Combination. The studied list of CGR is attached as a supplemental material (Chen and Hayashi, 2022). We suggest that refactoring detectors should cover CGRs. For future work, we plan to extend the current experiment by comparing different refactoring detection tools on a larger dataset.