IllinoisSL is a Java library for learning structured prediction models. It supports structured Support Vector Machines and structured Perceptron. The library consists of a core learning module and several applications, which can be executed from command-lines. Documentation is provided to guide users. In Comparison to other structured learning libraries, IllinoisSL is efficient, general, and easy to use. 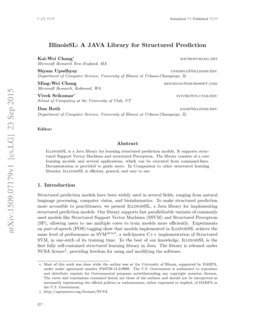 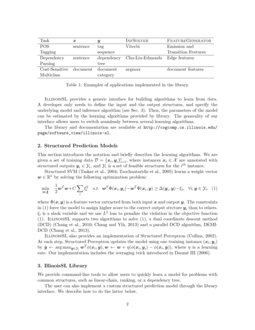 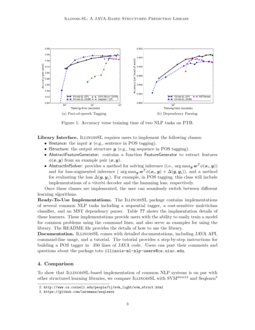 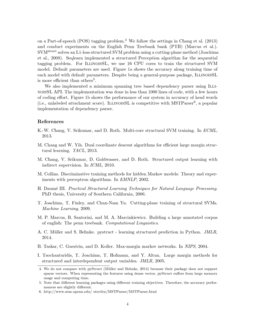 IllinoisSL, a Java library for implementing structured prediction models. Our library supports fast parallelizable variants of commonly used models like Structured Support Vector Machines (SSVM) and Structured Perceptron (SP), allowing users to use multiple cores to train models more efficiently. Experiments on part-of-speech (POS) tagging show that models implemented in IllinoisSL achieve the same level of performance as SVMstruct, a well-known C++ implementation of Structured SVM, in one-sixth of its training time. To the best of our knowledge, IllinoisSL is the first fully self-contained structured learning library in Java. The library is released under NCSA licence111http://opensource.org/licenses/NCSA, providing freedom for using and modifying the software.

provides a generic interface for building algorithms to learn from data. A developer only needs to define the input and the output structures, and specify the underlying model and inference algorithm (see Sec. 3). Then, the parameters of the model can be estimated by the learning algorithms provided by library. The generality of our interface allows users to switch seamlessly between several learning algorithms.

The library and documentation are available at http://cogcomp.cs.illinois.edu/page/software_view/illinois-sl.

This section introduces the notation and briefly describes the learning algorithms. We are given a set of training data D={xi,yi}li=1, where instances xi∈X are annotated with structured outputs yi∈Yi, and Yi is a set of feasible structures for the ith instance.

where Φ(x,y) is a feature vector extracted from both input x and output y. The constraints in (1) force the model to assign higher score to the correct output strcture yi than to others. ξi is a slack variable and we use L2 loss to penalize the violation in the objective function (1). IllinoisSL supports two algorithms to solve (1), a dual coordinate descent method (DCD) (Chang et al., 2010; Chang and Yih, 2013) and a parallel DCD algorithm, DEMI-DCD (Chang et al., 2013).

We provide command-line tools to allow users to quickly learn a model for problems with common structures, such as linear-chain, ranking, or a dependency tree.

The user can also implement a custom structured prediction model through the library interface. We describe how to do the latter below.

Once these classes are implemented, the user can seamlessly switch between different learning algorithms.

1 shows the implmentation details of these learners. These implementations provide users with the ability to easily train a model for common problems using the command lines, and also serve as examples for using the library. The README file provides the details of how to use the library.

Documentation. IllinoisSL comes with detailed documentations, including JAVA API, command-line usage, and a tutorial. The tutorial provides a step-by-step instructions for building a POS tagger in  350 lines of JAVA code. Users can post their comments and questions about the package toto illinois-ml-nlp-users@cs.uiuc.edu.

To show that IllinoisSL-based implementation of common NLP systems is on par with other structured learning libraries, we compare IllinoisSL with SVMstruct222http://www.cs.cornell.edu/people/tj/svm_light/svm_struct.html and Seqlearn333https://github.com/larsmans/seqlearn on a Part-of-speech (POS) tagging problem.444We do not compare with pyStruct (Müller and Behnke, 2014) because their package does not support sparse vectors. When representing the features using dense vector, pyStruct suffers from large memory usage and computing time. We follow the settings in Chang et al. (2013) and conduct experiments on the English Penn Treebank bank (PTB) (Marcus et al., ). SVMstruct solves an L1-loss structured SVM problem using a cutting-plane method (Joachims et al., 2009). Seqlearn implemented a structured Perception algorithm for the sequential tagging problem. For IllinoisSL, we use 16 CPU cores to train the structured SVM model. Default parameters are used. Figure (a)a shows the accuracy along training time of each model with default parameters. Despite being a general-purpose package, IllinoisSL is more efficient than others555Note that different learning packages using different training objectives. Therefore, the accuracy performances are slightly different. .

We also implemented a minimum spanning tree based dependency parser using IllinoisSL API. The implementation was done in less than 1000 lines of code, with a few hours of coding effort. Figure (b)b shows the performance of our system in accuracy of head words (i.e., unlabeled attachment score). IllinoisSL is competitive with MSTParser666http://www.seas.upenn.edu/ strctlrn/MSTParser/MSTParser.html, a popular implementation of dependency parser.