This paper presents an Inter-Defender Collision-Aware Interception Strategy (IDCAIS) for defenders to intercept attackers in order to defend a protected area, such that each defender also avoids collision with other defenders. In particular, the defenders are assigned to intercept attackers using a mixed-integer quadratic program (MIQP) that: 1)minimizes the sum of times taken by defenders to capture the attackers under time-optimal control, and2) helps eliminate or delay possible future collisions among the defenders on the optimal trajectories. To prevent inevitable collisions on optimal trajectories or collisions arising due to time-sub-optimal behavior by the attackers, a minimally augmented control using exponential control barrier function (ECBF) is provided. Simulations show the efficacy of the approach. 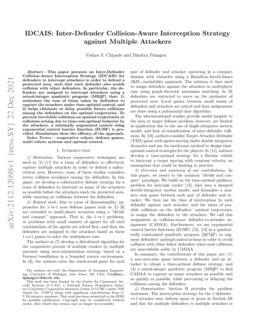 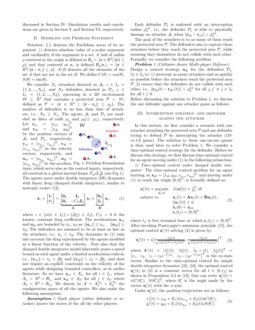 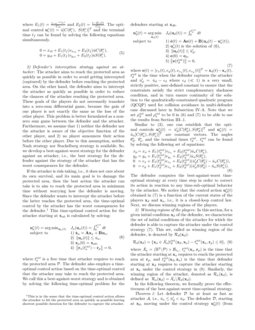 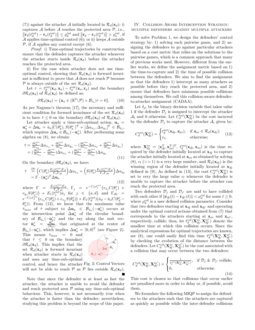 This paper studies a defense approach against one or more swarms of adve...
Vishnu S. Chipade, et al. ∙

Cooperatively planning for multiple agents has been proposed as a promis...
Tobias Kessler, et al. ∙

Myths and Misconceptions about Attackers and Attacks

This paper is based on a three year project during which we studied atta...
Stjepan Groš, et al. ∙

Message digest algorithms are one of the underlying building blocks of b...
Peter Robinson, et al. ∙

Evaluating Attacker Risk Behavior in an Internet of Things Ecosystem

Various cooperative techniques are used in [isaacs1999differential, venkatesan2014target, pachter2017differential, harris2020abnormal, mohanan2020target, huang2011differential, pierson2016intercepting, chen2017multiplayer, shishika2020cooperative, coon2017control, zheng2020time] for a team of defenders to effectively capture multiple attackers in order to defend a safety-critical area. However, none of these studies considers active collision avoidance among the defenders. In this paper, we develop a collaborative defense strategy for a team of defenders to intercept as many of the attackers as possible before the attackers reach the protected area, while ensuring no collisions between the defenders.

Due to curse of dimensionality, approaches for 1-vs-1 area defense games such as

[isaacs1999differential, venkatesan2014target, pachter2017differential, harris2020abnormal, mohanan2020target, huang2011differential] are extended to multi-player scenarios using a “divide and conquer” approach. That is, the 1-vs-1 problems, or problems with small number of agents for all such combinations of the agents are solved first, and then the defenders are assigned to the attackers based on these 1-vs-1 games to solve the multiplayer case.

The authors in [pierson2016intercepting] develop a distributed algorithm for the cooperative pursuit of multiple evaders by multiple pursuers using area-minimization strategy based on a Voronoi tessellation in a bounded convex environment. In [chen2017multiplayer], the authors solve the reach-avoid game for each pair of defender and attacker operating in a compact domain with obstacles using a Hamilton-Jacobi-Issacs (HJI) reachability approach. The solution is then used to assign defenders against the attackers in multiplayer case using graph-theoretic maximum matching. In [shishika2020cooperative] defenders are restricted to move on the perimeter of protected area. Local games between small teams of defenders and attackers are solved and then assignments are done using a polynomial time algorithm.

The aforementioned studies provide useful insights to the area or target defense problem, however, are limited in application due to the use of single-integrator motion model, and lack of consideration of inter-defender collisions. In [coon2017control], authors consider Target-Attacker-Defender (TAD) game with agents moving under double-integrator dynamics and use the isochrones method to design time-optimal control strategies for the players. In [zheng2020time], authors develop a time-optimal strategy for a Dubins vehicle to intercept a target moving with constant velocity, an assumption that could be limiting in practice.

I-3 Overview and summary of our contributions

In this paper, we resort to the common “divide and conquer” paradigm. We build on the time-optimal guidance problem for isotropic rocket [bakolas2014optimal], that uses a damped double-integrator motion model, and formulate a non-zero sum game between each pair of defender and attacker. We then use the time of interception by each defender against each attacker, and the times of possible collisions on the defenders’ optimal trajectories, to assign the defenders to the attackers. We call this assignment as collision-aware defender-to-attacker assignment (CADAA). Furthermore, we use exponential control barrier functions (ECBF) [nguyen2016exponential, wang2017safe] in a quadratically constrained quadratic program (QCQP) to augment defenders’ optimal control actions in order to avoid collision with other fellow defenders when such collisions are unavoidable solely by CADAA.

In summary, the contributions of this paper are: (1) a non-zero-sum game between a defender and an attacker to obtain a time-optimal defense strategy, and (2) a mixed-integer quadratic program (MIQP) to find CADAA to capture as many attackers as possible and as quickly as possible, while preventing or delaying the collisions among the defenders.

Notation: ∥⋅∥ denotes the Euclidean norm of its argument. |⋅| denotes absolute value of a scalar argument and cardinality if the argument is a set. A ball of radius ρ centered at the origin is defined as and that centered at rc is defined Bρ(rc)={r∈R2|∥r−rc∥≤ρ}. A∖B denotes all the elements of the set A that are not in the set B. We define C(θ)=cos(θ), S(θ)=sin(θ).

We consider Na attackers denoted as Ai, i∈Ia={1,2,...,Na}, and Nd defenders denoted as Dj, j∈Id={1,2,...,Nd}, operating in a 2D environment W⊆R2 that contains a protected area P⊂W, defined as P={r∈R2|∥∥r−rp∥∥≤ρp}. The number of defenders is no less than that of attackers, i.e., Nd≥Na. The agents Ai and Dj are modeled as discs of radii ρa and ρd(≤ρa), respectively.

be the position vectors of

where ı∈{ai|i∈Ia}∪{dj|j∈Id}, CD>0 is the known, constant drag coefficient. The accelerations uai and udj are bounded by ¯ua, ¯ud as: ∥uai∥≤¯ua,∥∥udj∥∥≤¯ud, The defenders are assumed to be at least as fast as the attackers, i.e., ¯ua≤¯ud. The dynamics in (1) take into account the drag experienced by the agents modeled as a linear function of the velocity. Note also that the damped double integrator model inherently poses a speed bound on each agent under a limited acceleration control, i.e., ∥vai∥<¯va=¯uaCD and ∥∥vdj∥∥<¯vd=¯udCD, and does not require an explicit constraint on the velocity of the agents while designing bounded controllers, as in earlier literature. So we have xai∈Xa, for all i∈Ia, where Xa=R2×B¯va and xdj∈Xd, for all j∈Id, where Xd=R2×B¯vd. We denote by X=XNaa×XNdd the configuration space of all the agents. We also make the following assumption:

Each player (either defender or attacker) knows the states of the all the other players.

Each defender Dj is endowed with an interception radius ρintd, i.e., the defender Dj is able to physically damage an attacker Ai when ∥∥rdj−rai∥∥<ρintd.