In this paper, we introduce heat kernel coupling (HKC) as a method of constructing multimodal spectral geometry on weighted graphs of different size without vertex-wise bijective correspondence. We show that Laplacian averaging can be derived as a limit case of HKC, and demonstrate its applications on several problems from the manifold learning and pattern recognition domain. 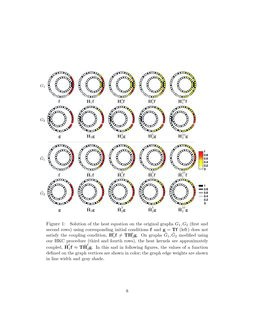 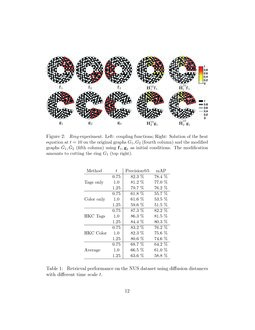 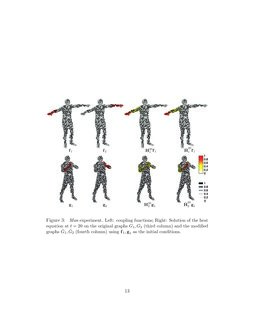 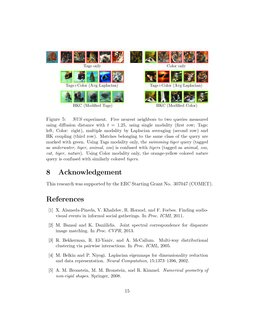 Many problems in computer vision and pattern recognition boil down to constructing a Laplacian operator describing some data manifold and finding its eigenvectors. Notable examples include spectral clustering

Recently, there has been an increased interest in extending spectral geometric constructions to the multimodal setting, involving two or more data spaces. Many data analysis applications involve observations and measurements of data using different modalities, such as multimedia documents [3, 37, 29, 24, 18, 23], audio and video [19, 1, 30], images with different lighting conditions [2], or medical imaging modalities [6].

the Frobenius norm of A. We say that A and B commute if AB=BA, and call [A,B]=AB−BA their commutator

. If there exists a unitary matrix

a column vector containing the diagonal elements of matrix

Hereinafter, we denote by L(V,E) the set of all valid Laplacian matrices of a simple graph (V,E), which is defined as follows: L=(lij)∈L(V,E) iff

Defining the Laplacian according to (1) through the edge weight matrix W, we automatically get properties (i) - (iii) satisfied. The other way round: Any valid Laplacian of a simple graph - in the sense of (i)-(iii) - gives rise to a weight matrix W of a simple weighted graph by defining wij=−lij,i≠j.

For numerical purposes, we will make use of a proper parametrization of the set of valid Laplacians. Let m=|E| denote the number of edges of G. For u=(u1,…,um)∈Rm≥0 we define the weight matrix W by

Defining L as in (1), the requirements (i)-(iii)of a valid Laplacian are satisfied. In undirected weighted graph, the matrices W and L are symmetric. Furthermore, L is positive semi-definite. Consequently, L admits the unitary eigendecomposition L=ΦΛΦ⊤ with orthonormal eigenvectors Φ=(ϕ1,…,ϕn)

Heat diffusion on graphs. Let f:V→R denote a function defined on the vertex set of the graph. We can identify f with an |V|-dimensional vector f=(f(x1),…,f(x|V|)), and denote by F(V) the space of such functions.

Similarly to the standard heat diffusion equation, one can define a diffusion process on G, governed by the following equation:

where the solution f(t):V×[0,∞)→R+ is the amount of heat at time t at the vertices V. The solution of the heat equation is given by f(t)=Htf0, where

is the heat operator (or the heat kernel).

The heat kernel gives rise to the diffusion distance [12, 11]

measuring the ‘reachability’ of vertex xq from vertex xp in time t.

Consider two graphs Gk=(V,E,Wk),k=1,2 with the same vertices V and edges E with different weights Wk. We denote their respective Laplacians by Lk∈L(V,E). Such graphs are referred to as multi-level graphs [15], and are used to represent multiple modalities or ‘views’ of the same data. 111For simplicity, we consider only two modalities, though extension to more modalities is straightforward. The main topic of this paper is how to re-define the above spectral geometric constructions (heat kernels, diffusion distances, etc.) in a way that they account for information from both graphs.

The simplest approach is to define an average weight ¯W=12(W1+W2) [22]. Equivalently, this problem can be posed as finding a new Laplacian ¯L∈L(V,E) that is equidistant from the given L1,L2,

Instead of averaging the Laplacians, Eynard et al. [16]

proposed ‘averaging’ their eigenspaces by means of a joint diagonalization approach: construct a common (approximate) eigenbasis

^Φ that (approximately) diagonalizes the Laplacians L1,L2, by the following minimization

where off(A)=∑i≠ja2ij denotes the squared norm of the off-diagonal elements of a matrix [9]. The joint basis ^Φ obtained in this way satisfies ^Φ⊤Lk^Φ≈diag(^λk,1,…,^λk,|V|). The approximate matrices

obtained by setting to zero the off-diagonal elements of ^Φ⊤Lk^Φ are jointly diagonalizable by ^Φ. Importantly, in most cases ^Lk∉L(V,E), i.e., Laplacian structure does not survive joint diagonalization.

In [7], we considered a different problem of finding a pair ~L1,~L2 of commuting matrices (referred to as closest commuting operators or CCOs) that are closest to the given L1,L2,

and showed that this problem is equivalent to JADE (6) in the following sense:

Let A,B be symmetric matrices. Then:

2. Let ^U be the approximate joint eigenbasis of A,B obtained by solving the JADE problem (6). Then, ~A=^UDiag(^U⊤A^U)^U⊤ and ~B=^UDiag(^U⊤B^U)^U⊤ are the closest commuting matrices to A,B solving the CCO problem (7).

3. Let ~A,~B be the closest commuting matrices solving the CCO problem (7). By virtue of their commutativity, ~A,~B are jointly diagonalizable, and their joint eigenbasis ^U solves the JADE problem (6).

A big advantage of this approach compared to JADE is the possibility to demand that the closest commuting matrices define valid Laplacians, i.e., restrict the search space to L(V,E):

The methods described in Section 3 rely on the assumption of graphs with equal vertex set, which may be too restrictive in many cases. More generally, we are given two different graphs Gk=(Vk,Ek,Wk),k=1,2, where |V1|≠|V2|. The correspondence between the vertices is not bijective anymore, but one can consider functional correspondence T:F(V1)→F(V2), represented by the |V2|×|V1| matrix T [27].

In this weaker setting, we assume that correspondence T is unknown, but we have a set of q corresponding functions on V1 and V2 represented as columns of matrices F=(f1,…,fq) and G=(g1,…,gq) such that TF=G. Writing the weak coupling condition (10) for every pair fi,gj, we get the condition on the equality of q×q matrices

which we consider on a finite set of the values t∈{t1,…,tp}.

Typically, two different graphs will have their heat kernels uncoupled, violating the coupling conditions (see example in Figure 1 (top), where different behavior of the heat equation stems from topological noise). The problem of heat kernel coupling (HKC) treated in this paper is how to minimally modify the Laplacians of the graphs to make the respective heat kernels (approximately) satisfy the weak coupling condition by enforcing (11); in Figure 1 (bottom) such a modification amounts to disconnecting the rings in both graphs.

Our HKC problem bears resemblance to the CCO problem described in Section 3: we are looking for new graphs ~Gk=(Vk,Ek,~Wk) with respective adjacency matrices ~Wk, such that the new Laplacians ~Lk are as close as possible to the original Lk, and the corresponding new heat operators ~Htk=e−t~Lk are as coupled as possible,

It is important to observe the following limit case: for graphs Gk=(V,E,Wk) with equal vertex and edge sets discussed in Section 3, we have bijective correspondence between the entries of the heat operators ~H1,~H2, implying F=G=I. In the limit α→∞, we have ~Ht1=~Ht2, from which it follows that ~L1=~L2=~L. Thus, the HKC problem (12) boils down to the simple Laplacian averaging (5), and can be considered an extension of this technique to the setting where one cannot straightforwardly average Laplacians since the correspondence between the graphs is not given.

We parametrize our problem through the adjacency matrix ~Wk(uk), where the edge weights uk=(uk1,…,uk|Ek|) are defined according to (2). Problem (12) can be rewritten as

Its solution is carried out using standard optimization techniques, requiring the gradient of the cost function.

We differentiate the cost function (13) w.r.t. the edge weights ~wkij:(i,j)∈Ek constituting the vectors uk, accounting for the symmetric structure of ~Wk. The gradient of the distance term is given by

The gradient of the coupling term is computed by applying the chain rule several times, as follows. First, let

be a |Vk|×|Vk| matrix containing only four non-zero elements in its ith and jth row and column. Second, for each k=1,2 and m=1,…,p compute the 2|Vk|×2|Vk| matrix exponent

and extract its |Vk|×|Vk| upper right block, which we denote by ^Hijk,m. Finally,

In this section, we demonstrate our HKC approach on several synthetic and real datasets coming from shape analysis, manifold learning, and pattern recognition problems. The experiments closely follow our previous work [7], and their leitmotif is, given two datasets representing similar objects in somewhat different ways, to reconcile the information of the two modalities producing a single consistent representation. We should stress that though we know the groundtruth correspondence between the vertices of the graphs representing different modalities, we are not using it in our HKC problem. Instead, we only assume to be given few corresponding functions F,G that are used to couple the heat kernels.

In all the experiments, we used unnormalized Laplacians (1) constructed with Gaussian weights. We used α=106 in the cost (13). Optimization was performed using MATLAB optimization toolbox.

Ring. We used a ring and a cracked ring sampled at 70 points and connected using four nearest neighbors (Figure 2, top and bottom). Three functions only were used for coupling (Figure 2, three leftmost columns). Because of the topological difference, the behavior of the heat flow differs dramatically (Figure 2, fourth column from left) The HKC optimization cuts the connections in the first graph, making the two rings topologically equivalent and resulting in the same heat flow (Figure 2, rightmost)

Man. We used two poses of the human shape from the TOSCA dataset [5], uniformly sampled at 500 points and connected using five nearest neighbors. The resulting graphs have different topology (the hands are connected or disconnected, compare Figure 3 top and bottom), resulting in a very different heat flow. Two functions were used for coupling (Figure 3, two leftmost columns) in our HKC problem; our optimization disconnects these links (Figure 3, right) making the heat flow in both cases behave similarly.

NUS. We used a subset of the NUS-WIDE dataset [10] containing images (represented by 64-dimensional color histograms) and their text annotations (represented by 1000-dimensional distributions of most frequent tags) from seven classes. The classes were selected on purpose in order to be ambiguous in different modalities: for example, in the Tags modality underwater tigers can be similar both to tigers and water animals, as they share many tags. On the other hand, in the Color modality tigers may be similar to the class of nature, containing images with orange-yellow autumn colors [16].

Figure 4 shows the precision-recall curve of different methods, and Table 1 summarizes the mean average precision. We can see that after HKC optimization, performance increases significantly, outperforming each modality on its own. Figure 5 shows examples of first matches corresponding to ambiguous queries. For reference only, we show the performance of Laplacian averaging, which however relies on bijective correspondence between the graphs (which is not used in our HKC problem) and is thus not directly comparable.

We showed the heat kernel coupling problem, whereby we seek to minimally modify a pair of Laplacians to make the corresponding heat kernels to become coupled, such that the solution of a heat equation on two graphs behaves consistently. This problem generalizes simple Laplacian averaging to the setting when the correspondence between the two graphs is unknown.

This research was supported by the ERC Starting Grant No. 307047 (COMET).