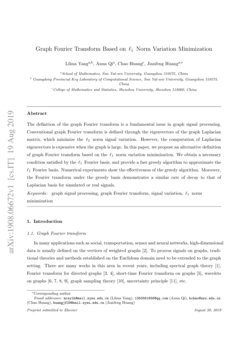 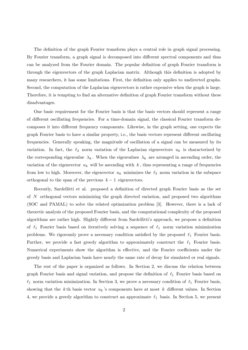 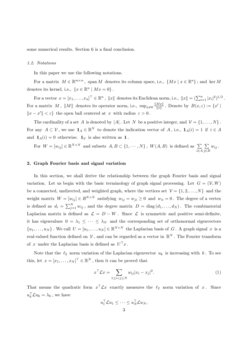 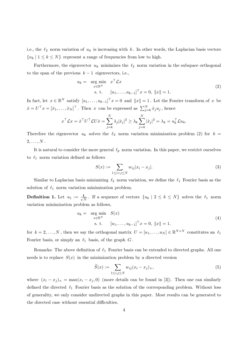 In many applications such as social, transportation, sensor and neural networks, high-dimensional data is usually defined on the vertices of weighted graphs

One basic requirement for the Fourier basis is that the basis vectors should represent a range of different oscillating frequencies. For a time-domain signal, the classical Fourier transform decomposes it into different frequency components. Likewise, in the graph setting, one expects the graph Fourier basis to have a similar property, i.e., the basis vectors represent different oscillating frequencies. Generally speaking, the magnitude of oscillation of a signal can be measured by its variation. In fact, the

is characterized by the corresponding eigenvalue

Recently, Sardellitti et al. proposed a definition of directed graph Fourier basis as the set of N orthogonal vectors minimizing the graph directed variation, and proposed two algorithms (SOC and PAMAL) to solve the related optimization problem Sardellitti2017 . However, there is a lack of theoretic analysis of the proposed Fourier basis, and the computational complexity of the proposed algorithms are rather high. Slightly different from Sardellitti’s approach, we propose a definition of ℓ1 Fourier basis based on iteratively solving a sequence of ℓ1 norm variation minimization problems. We rigorously prove a necessary condition satisfied by the proposed ℓ1 Fourier basis. Further, we provide a fast greedy algorithm to approximately construct the ℓ1 Fourier basis. Numerical experiments show the algorithm is effective, and the Fourier coefficients under the greedy basis and Laplacian basis have nearly the same rate of decay for simulated or real signals.

In this paper we use the following notations.

In this section, we shall derive the relationship between the graph Fourier basis and signal variation. Let us begin with the basic terminology of graph signal processing. Let G=(V,W) be a connected, undirected, and weighted graph, where the vertices set V={1,2,…,N} and the weight matrix W=[wij]∈RN×N satisfying wij=wji≥0 and wii=0. The degree of a vertex is defined as di=∑Nj=1wij, and the degree matrix D=diag(d1,…,dN). The combinatorial Laplacian matrix is defined as L=D−W. Since L is symmetric and positive semi-definite, it has eigenvalues 0=λ1≤⋯≤λN and the corresponding set of orthonormal eigenvectors {u1,…,uN}. We call U=[u1,…,uN]∈RN×N the Laplacian basis of G. A graph signal x is a real-valued function defined on V, and can be regarded as a vector in RN. The Fourier transform of x under the Laplacian basis is defined as U⊤x.

Note that the ℓ2 norm variation of the Laplacian eigenvector uk is increasing with k. To see this, let x=[x1,…,xN]⊤∈RN, then it can be proved that

That means the quadratic form x⊤Lx exactly measures the ℓ2 norm variation of x. Since u⊤kLuk=λk, we have

i.e., the ℓ2 norm variation of uk is increasing with k. In other words, the Laplacian basis vectors {uk∣1≤k≤N} represent a range of frequencies from low to high.

Furthermore, the eigenvector uk minimizes the ℓ2 norm variation in the subspace orthogonal to the span of the previous k−1 eigenvectors, i.e.,

It is natural to consider the more general ℓp norm variation. In this paper, we restrict ourselves to ℓ1 norm variation defined as follows

, then we say the orthogonal matrix

Remarks: The above definition of ℓ1 Fourier basis can be extended to directed graphs. All one needs is to replace S(x) in the minimization problem by a directed version

where (xi−xj)+=max(xi−xj,0) (more details can be found in Sardellitti2017 ). Then one can similarly defined the directed ℓ1 Fourier basis as the solution of the corresponding problem. Without loss of generality, we only consider undirected graphs in this paper. Most results can be generated to the directed case without essential difficulties.

In the previous section, the ℓ1 Fourier basis vectors are defined as the solutions of a sequence of minimization problem (4). We rewrite problem (4) in a concise form:

First, let us recall some basic definitions of optimization theory. Denote the feasible region of problem PU by XU, i.e.,

Due to the sphere constraint ∥x∥=1, problem PU is not a convex optimization problem. As far as we know, there are no general results about the global minimum of such problems, and in most cases it is only possible to approach the local minimum by iterative algorithms Bresson2012 ; Lai2014 . As the main result of this section, we shall prove a necessary condition satisfied by the local minimum (Theorem 4). The key ingredient of the proof is based on the concept of piecewise representation, which is introduced as follows.

We next prove problem (13) has minimum only if l=1. It is proved by contradiction.

Suppose l≥2. By the method of Lagrange multipliers, the minimum c of problem (13) satisfies the equation

where μ is a Lagrange multiplier. Thus g=−2μQc.

since Q is symmetric and positive definite.

which contradicts to c being the minimum of problem (13). The proof is complete. ∎

), we deduce an estimate of the number of values of the components of a local minimum

If x∈X∗∗U, then the components of x have at most k different values.

we have m≤k. By definition of piecewise representation, m is the number of different values of x’s components. The proof is complete. ∎

Corollary 5 asserts that the kth ℓ1 basis vector uk, as the global (hence local) minimum of problem P[u1,…,uk−1], is at most a k-valued signal. In particular, u1 is a constant signal and u2 is exactly a two-valued signal. Intuitively speaking, the larger k is, the more values uk can take, the more oscillation uk might present. Thus the ℓ1 basis vectors {uk} represent different oscillation frequencies from low to high as expected.

For any vector x∈RN, its partition matrix M has at most N columns, and each entry of M is either 0 or 1. Therefore the set of all partition matrices of vectors in RN is a finite set, so M∗U as a subset is also finite.

By Theorem 6, ψU(M) has two elements in total, which differs by a sign. Let

The local minima set X∗∗U is a subset of X∗U. In fact, If x∈X∗∗U and ϕ(x)=M, then M∈M∗U and x∈XU∩spanM, hence x∈ψU(M)⊂X∗U. It follows that X∗∗U is also a finite set, i.e., each local minima is isolated and the total number of local minima is finite. Figure 1 shows the relations between these sets and definitions. Here X∗U resembles the concept of critical points, which contains but not equals the set of local minima.

Since X∗U is finite, to find the global minimum of problem PU, one way is to compute S(x) for all x in X∗U and pick out the largest one. Table 1 shows a special case for N=4, U=1√N.

Through this method of enumeration, the continuous problem PU is equivalent to a discrete problem in which the variable x belongs to a finite set X∗U. However, as far as we know, the discrete problem has no effective algorithm, since the size of X∗U grows exponentially with N, and the method of enumeration is impractical for large N. In the next section, we will give a fast greedy algorithm to approximately construct the ℓ1 Fourier basis when N is large.

In this section, we provide a fast greedy algorithm to approximately construct the ℓ1 Fourier basis. Through piecewise representation, the partition matrix of the kth ℓ1 basis vector uk naturally induces a partition of the vertices set V. The increasing of variation of uk implies that the corresponding partition evolves from coarser to finer scales. On the contrary, given a sequence of partitions varying across different scales, one might be able to construct an orthonormal basis close to ℓ1 basis. Motivated by this idea, we propose a greedy algorithm, based on a partition sequence τk created by iteratively grouping the vertices. In each step, we pick out the two groups of vertices with the largest mutual weights between them, and combine them in a new group. Repeating the process, we get a sequence of partitions τk varying from finer to coarser scales. Then based on τk, we define a sequence of subspaces Vk of RN. By using the similar ideas of multi-resolution analysis, we obtain an orthonormal basis.

We define a sequence of partitions τk on the vertices set V={1,…,N} as follows.

Definition 7 actually represents a vertices grouping process. At the beginning, the finest partition τN has N groups, each group having one vertex. To get the next partition τN−1, we identify AN,BN as the two groups having the largest mutual weight. Then we combine AN and BN to get a new group AN∪BN, and together with the other groups in τN we form a new partition τN−1. This operation repeats for N−1 times. At the end, we get the coarsest partition τ1={1,2,…,N}, with all the vertices belonging to a single group. See Figure 2 for an illustration.

which satisfy the relations

Table 2 shows a simple example of the greedy basis ˜U given a partition sequence τk, where the number of vertices N=5. Figure 3 plots the binary tree formed by Ak and Bk.

An interesting question is whether the greedy basis vector ˜uk minimizes the ℓ1 norm variation. We will show that the partition matrix induced by the greedy partition τk satisfies the necessary condition (10).