In many robot control problems, factors such as stiffness and damping matrices and manipulability ellipsoids are naturally represented as symmetric positive definite (SPD) matrices, which capture the specific geometric characteristics of those factors. Typical learned skill models such as dynamic movement primitives (DMPs) can not, however, be directly employed with quantities expressed as SPD matrices as they are limited to data in Euclidean space. In this paper, we propose a novel and mathematically principled framework that uses Riemannian metrics to reformulate DMPs such that the resulting formulation can operate with SPD data in the SPD manifold. Evaluation of the approach demonstrates that beneficial properties of DMPs such as change of the goal during operation apply also to the proposed formulation. 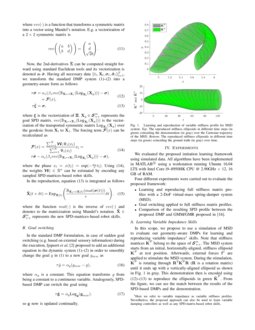 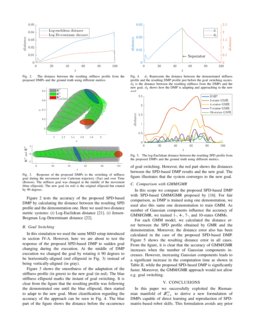 Day by day realistic robotic applications are bringing robots into human environments such as houses, hospitals, and museums where they are expected to assist us in our daily life tasks. Such human-inhabited environments are highly unstructured, dynamic and uncertain, making hard-coding the environments and related skills infeasible.

In this context, human expertise can be exploited to teach robots how to perform such tasks by transferring human skills to robots [17]. Learning-from-human-demonstrations (LfD) has been widely studied as a convenient way to transfer human skills to robots. This learning approach is aimed at extracting relevant motion patterns from human demonstrations and subsequently applying these patterns to different situations. In the past decades, several LfD based approaches have been developed such as: dynamic movement primitives (DMP) [9, 2], probabilistic movement primitives (ProMP) [13]

[4], and more recently, kernelized movement primitives (KMP) [8, 7]. DMPs have several beneficial properties such as robustness against perturbations and ability to adapt to new requirements such as a new goal.

However, many tasks in those environments require variable impedance [10, 19, 1] or high manipulability [6, 21, 12, 15]), the parameters of which are encapsulated in symmetric positive definite (SPD) matrices. Because of the structure of the manifold of SPD matrices, standard LfD approaches such as DMPs can not be directly used as they rely on Euclidean parametrization of the space.

In this paper, we a novel formulation for DMPs using Riemannian metrics such that the resulting formulation can operate with SPD data. This allows variable SPD quantities to be modeled while retaining the useful properties of standard DMPs. The main contributions are

This extension of DMPs to Riemannian manifolds allows the generation of smooth trajectories for data that do not belong to the Euclidean space.

The work is inspired by quaternion and rotation matrix based formulations of DMPs [2, 20] which target specifically the problem of parametrizing the space of orientations SO(3)

. Compared to the tensor-based formulation of GMM and GMR on Riemannian manifold of SPD matrices

[11] (demonstrated for manipulability transfer in [15]), the proposed approach allows adapting the SPD profile on-line to a new goal, similar to the difference between standard GMM/GMR and DMPs for Euclidean quantities.

In this scope we introduce a brief introduction to standard DMPs and Riemannian manifold of SPD matrices.

The basic idea of DMPs is to model movements by a system of differential equations that ensure some desired behavior, e.g. convergence to the specified attractor point [16, 9, 2]

. A DMP for a single degree of freedom trajectory

where z is the scaled velocity, x is the phase variable to avoid explicit time dependency and x(0)=1, αz and βz define the behavior of the 2nd–order system, g is the goal of the movement, and f(x) is a nonlinear forcing term that provides a modeling of complex trajectories. Choosing a time constant τ>0 along with αz=4βz and αx>0 will make the linear part of (1) and (2) critically damped, which insures the convergence of y and z to a unique attractor point at y=g and z=0 [9]. f(x) is defined as a linear combination of N

nonlinear radial basis functions, which enables the robot to follow any smooth trajectory from the initial position

y0 to the final configuration g

hi their widths. For a given N and setting τ equal to the total duration of the desired movement, we can define ci=exp(−αxi−1N−1), hi=1(ci+1−ci)2 and hN=hN−1 where i=1,…,N. For each DoF, the weights wi should be adjusted from the measured data so that the desired behavior is achieved. For controlling a robotic system with more than one DoF, we represent the movement of every DoF with its own equation system (1)–(2), but with the common phase (3) to synchronize them.

[14], and thus the use of classical Euclidean space methods for treating and analyzing these matrices is inadequate. A compelling solution is to incorporate these matrices with a Riemannian metric, which allows the set of SPD matrices to form a Riemannian manifold [14]. Such a metric defines the geodesics, that is, the minimum length curves between two points on the manifold.

A Riemannian manifold M is a topological space, each point of which locally resembles a Euclidean space. For each point p∈M, there exists a tangent space TpM which corresponds to the space of symmetric matrices for the case of the SPD manifold. The metric in the tangent space is flat, which allows the use of classical arithmetic tools. Note that the space of Sm++ can be represented as the interior of a convex cone embedded in its tangent space of symmetric m×m matrices Symm.

To operate on the tangent spaces, a mapping system is required to switch between TpM and M. The two mapping operators are known as exponential and logarithmic maps:

The exponential map ExpΓ(Δ):TΓM↦M is a function that maps a point Δ∈TΓM to a point Q∈M, so that it lies on the geodesic starting from Γ∈Sm++ in the direction of Δ.

where logm(⋅) and expm(⋅) are the matrix logarithm and exponential functions.

where CΓ↦Q=(QΓ−1)12. Equation (8) has been proved to be computationally efficient [22]. This transporter is exploited whenever it is required to transport SPD matrices along geodesics in a nonlinear manifold.

In this paper, we exploit the Riemannian manifold to reformulate DMPs to be capable of encoding and reproducing SPD-matrices-based robot skills.

In this section, we provide a complete formulation for DMPs in order to learn and reproduce SPD-matrices-based robot skills. For the sake of simplicity let us first recall the re-interpretation of basic standard operations in a Riemannian manifold (Table I). Define A,B∈M and a,b∈Rn.

where each dΞt belongs to the corresponding tangent space TXl−1M. Afterwards, we use (8) to move all dΞl to a common/shared arbitrary tangent space, e.g. the tangent space of the first SPD data TX1M. The tangent space TX1M corresponds to Symm, which allows the use of classical arithmetic tools as mentioned in section II-B. To avoid replicating information due to symmetry, we propose to reduce the space dimensionality of the data in the tangent space to n=m+m(m−1)/2 using Mandel’s representation.

Now, the 2nd-derivatives ˙Σ can be computed straight forward using standard Euclidean tools and its vectorization is denoted as ˙σ. Having all necessary data {tl,Xl,σl,˙σl}Tl=1, we transform the standard DMP system (1)–(2) into a geometry-aware form as follows

can be estimated by encoding any sampled SPD-matrices-based robot skills.

In the reproduction, equation (13) is integrated as follows

where the function mat(⋅) is the inverse of vec(⋅) and denotes to the matricization using Mandel’s notation. ^X∈Sm++ represents the new SPD-matrices-based robot skills.

In the standard DMP formulation, in case of sudden goal switching (e.g. based on external sensory information) during the execution, Ijspeert et al. [9] proposed to add an additional equation to the dynamic system (1)–(2) in order to smoothly change the goal g in (1) to a new goal gnew as

where αg is a constant. This equation transforms g from being a constant to a continuous variable. Analogously, SPD-based DMP can switch the goal using

so g now is updated continually.

We evaluated the proposed imitation learning framework using simulated data. All algorithms have been implemented in MATLAB

Four different experiments were carried out to evaluate the proposed framework:

In this scope, we propose to use a simulation of MSD to evaluate our geometry-aware DMPs for learning and reproducing variable impedance111Here we refer to variable impedance as variable stiffness profiles. Nevertheless, the proposed approach can also be used to learn variable damping controllers as well as any SPD-matrix-based robot skills. skills. Note that stiffness matrices KP belong to the space of Sm++. The MSD system starts from an initial, horizontally-aligned, stiffness ellipsoid KP at rest position. Afterwards, external forces fe are applied to stimulate the MSD system. During the stimulation, KP is rotating through RTKPR (R is a rotation matrix) until it ends up with a vertically-aligned ellipsoid as shown in Fig. 1 in gray. This demonstration then is encoded using (12)–(13) to reproduce the ellipsoids in green ^KP. From the figure, we can see the match between the results of the SPD-based DMPs and the demonstration.

Figure 2 tests the accuracy of the proposed SPD-based DMP by calculating the distance between the resulting SPD profile and the demonstration one. Here we used two distance metric systems: (i) Log-Euclidean distance [3]. (i) Jensen-Bregman Log-Determinant distance [5].

In this simulation we used the same MSD setup introduced in section IV-A. However, here we are about to test the response of the proposed SPD-based DMP to sudden goal changing during the execution. At the middle of DMP execution we changed the goal by rotating it 90 degrees to be horizontally-aligned (red ellipsoid in Fig. 3) instead of being vertically-aligned (in gray).

Figure 3 shows the smoothness of the adaptation of the stiffness profile (in green) to the new goal (in red). The blue stiffness ellipsoid marks the instant of goal switching. It is clear from the figure that the resulting profile was following the demonstrated one until the blue ellipsoid, then started to adapt to the new goal. More clearification regarding the accuracy of the approach can be seen in Fig. 4. The blue part of the figure shows the distance before the occurrence of goal switching. However, the red part shows the distances between the SPD-based DMP results and the new goal. The figure illustrates that the system converges to the new goal.

In this scope we compare the proposed SPD-based DMP with SPD-based GMM/GMR proposed by [11]. For fair comparison, as DMP is trained using one demonstration, we used also this same one demonstration to train GMM. As number of Gaussian components influence the accuracy of GMM/GMR, we trained 1-, 4-, 7-, and 10-states GMMs.

For each GMM model, we calculated the distance error between the SPD profile obtained by GMR and the demonstration. Moreover, the distance error also has been calculated in the case of the proposed SPD-based DMP. Figure 5 shows the resulting distance error in all cases. From the figure, it is clear that the accuracy of GMM/GMR increases when the number of Gaussian components increases. However, increasing Gaussian components leads to a significant increase in the computation time as shown in Table II, while the proposed SPD-based DMP is significantly faster. Moreover, the GMM/GMR approach would not allow e.g. goal switching.

The algorithm has been extensively validated through multiple simulation examples. Moreover, a comparison with GMM/GMR demonstrates that the proposed approach provides at least similar accuracy with a significantly lower computation cost.

In the future we propose to integrate our approach with other algorithms, e.g. iterative learning control, in order to not just reproduce SPD-matrix-based skills, but also to adapt to different situations and perform more complex tasks (e.g. forced-based variable impedance control). Moreover, we will work on exploration-based learning methods, which will prove to be crucial when a robot needs to significantly adapt to a new situation, e.g. adapt its stiffness, in order to perform successfully in a large diversity of task situations.

This work is supported by CHIST-ERA project IPALM (Academy of Finland decision 326304).