We propose to use Gaussian process regression to accurately estimate the diffusion MRI signal at arbitrary locations in q-space. By estimating the signal on a grid, we can do synthetic diffusion spectrum imaging: reconstructing the ensemble averaged propagator (EAP) by an inverse Fourier transform. We also propose an alternative reconstruction method guaranteeing a nonnegative EAP that integrates to unity. The reconstruction is validated on data simulated from two Gaussians at various crossing angles. Moreover, we demonstrate on non-uniformly sampled in vivo data that the method is far superior to linear interpolation, and allows a drastic undersampling of the data with only a minor loss of accuracy. We envision the method as a potential replacement for standard diffusion spectrum imaging, in particular when acquistion time is limited. 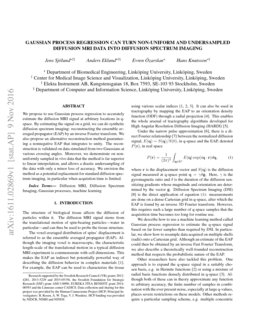 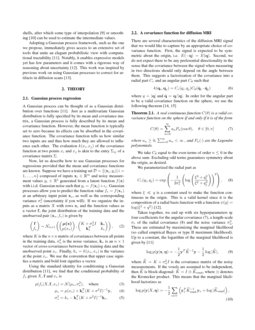 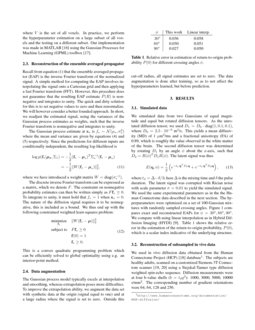 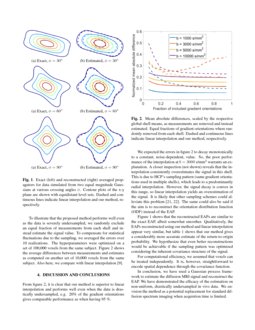 The structure of biological tissue affects the diffusion of particles within it. The diffusion MRI signal stems from the translational motion of spin-bearing particles—water in particular—and can thus be used to probe the tissue structure.

The voxel-averaged distribution of spins’ displacement is referred to as the ensemble averaged propagator (EAP). Although the imaging voxel is macroscopic, the characteristic length-scale of the translational motion in a typical diffusion MRI experiment is commensurate with cell dimensions. This makes the EAP an indirect but potentially powerful way of describing the diffusion behavior in complex materials [1]. For example, the EAP can be used to characterize the tissue using various scalar indices [1, 2, 3]. It can also be used in tractography by mapping the EAP to an orientation density function (ODF) through a radial projection [4]. This enables the whole arsenal of tractography algorithms developed for High Angular Resolution Diffusion Imaging (HARDI) [5].

Under the narrow pulse approximation [6], there is a direct Fourier relationship [7] between the normalized diffusion signal, E(q)=S(q)/S(0), in q-space and the EAP, denoted P(r), in real space

is the displacement vector and

S(q) is the diffusion signal measured at q-space point q=γδg. Here, γ is the gyromagnetic ratio and δ is the duration of the diffusion sensitizing gradients whose magnitude and orientation are determined by the vector g. Diffusion Spectrum Imaging (DSI) [8] is the direct application of equation (1): measurements are done on a dense Cartesian grid in q-space, after which the EAP is found by an inverse 3D Fourier transform. However, this requires such a large number of q-space samples that the acquisition time becomes too long for routine use.

We describe how to use a machine learning method called Gaussian process regression to estimate the q-space signal based on far fewer samples than required by DSI. In particular, we show how to resample data acquired on multiple shells (radii) onto a Cartesian grid. Although an estimate of the EAP could then be obtained by an inverse Fast Fourier Transform, we also describe a theoretically well-founded reconstruction method that respects the probabilistic nature of the EAP.

Other researchers have also tackled this problem. One approach is to expand the q-space signal in a suitably chosen basis, e.g. in Hermite functions [2]

[3]. Although both of these can in theory approximate any function to arbitrary accuracy, the finite number of samples in combination with the ever present noise, especially at large q-values, places severe restrictions on these models. Other methods require a particular sampling scheme, e.g. multiple concentric shells, after which some type of interpolation [9] or smoothing [10] can be used to estimate the intermediate values.

Adopting a Gaussian process framework, such as the one we propose, immediately gives access to an extensive set of tools that unite an elegant probabilistic view with computational tractability [11]. Notably, it enables expressive models yet has few parameters and it comes with a rigorous way of reasoning about uncertainty [12]. This work was inspired by previous work on using Gaussian processes to correct for artifacts in diffusion scans [13].

Now, let us describe how to use Gaussian processes for regressions provided that the mean and covariance functions are known. Suppose we have a training set D={(xi,yi)|i=1,…,n} composed of inputs xi∈Rm and noisy measurement values yi∈R1 generated from a latent function f(x) with i.i.d. Gaussian noise such that yi=f(xi)+ϵi. Gaussian processes allow you to predict the function value f∗=f(x∗) at an arbitrary input point x∗

, as well as the corresponding variance

σ2∗ (uncertainty if you will). If we organize the inputs as a matrix X with rows xi and the function values as a vector f

, the joint distribution of the training data and the unobserved pair

where K is the n×n matrix of covariances between all points in the training data, σ2n is the noise variance, k∗ is an n×1 vector of cross-covariances between the training data and the unobserved point x∗. Finally, k∗=k(x∗,x∗) is the variance at the point x∗. We use the convention that upper case signifies a matrix and bold font signifies a vector.

Using the standard identity for conditioning a Gaussian distribution [11]

, we find that the conditional probability of

2.2 A covariance function for diffusion MRI

There are several characteristics of the diffusion MRI signal that we would like to capture by an appropriate choice of covariance function. First, the signal is expected to be symmetric about the origin, i.e. E(−q)=E(q). Second, we do not expect there to be any preferential directionality in the sense that the covariance between the signal when measuring in two directions should only depend on the angle between them. This suggests a factorization of the covariance into a radial part Cr and an angular part Cθ such that

where q=|q| and ^q=q/|q|. In order for the angular part to be a valid covariance function on the sphere, we use the following theorem [14, 15]

in the above sum. Excluding odd terms guarantees symmetry about the origin, as desired.

We parameterized the radial part as

where ξ≪q is a constant used to make the function continuous in the origin. This is a valid kernel since it is the composition of a radial basis function with a function ψ(q)=log(ξ2+q2) [12].

Taken together, we end up with six hyperparameters

where ˜K=K+σ2nI is the covariance matrix of the noisy measurements. If the voxels are assumed to be independent, then ˜K is block-diagonal: ˜K=I⊗˜Kvoxel, where ⊗ denotes the Kronecker product. This means that the marginal likelihood factorizes as

where V is the set of all voxels. In practice, we perform the hyperparameter estimation on a large subset of all voxels and the testing on a different subset. Our implementation was made in MATLAB [16] using the Gaussian Processes for Machine Learning (GPML) toolbox [17].

2.3 Reconstruction of the ensemble averaged propagator

Recall from equation (1) that the ensemble averaged propagator (EAP) is the inverse Fourier transform of the normalized signal. A simple method for computing the EAP involves interpolating the signal onto a Cartesian grid and then applying a fast Fourier transform (FFT). However, this procedure does not guarantee that the resulting EAP estimate ^P(R) is nonnegative and integrates to unity. The quick and dirty solution for this is to set negative values to zero and then renormalize. We will however consider a better founded approach. In short, we readjust the estimated signal, using the variances of the Gaussian process estimates as weights, such that the inverse Fourier transform is nonnegative and integrates to unity.

The Gaussian process estimate at x∗ is f∗∼N(μ∗,σ2∗) where the mean and variance are given by equations (4) and (5) respectively. Since the predictions for different inputs are conditionally independent, the resulting log-likelihood is

where we have introduced a weight matrix W=diag(σ−1∗).

The discrete inverse Fourier transform can be expressed as a matrix, which we denote F. The constraint on nonnegative probability estimates can then be written simply as Ff∗≥0. To integrate to unity, it must hold that f∗=1 when x∗=0. The nature of the diffusion signal requires it to be nonnegative, this is included as a bound. We thus end up with the following constrained weighted least-squares problem:

This is a convex quadratic programming problem which can be efficiently solved to global optimiality using e.g. an interior-point method.

The Gaussian process model typically excels at interpolation and smoothing, whereas extrapolation poses more difficulties. To improve the extrapolation ability, we augment the data set with synthetic data at the origin (signal equal to one) and at a large radius where the signal is set to zero. Outside this cut-off radius, all signal estimates are set to zero. The data augmentation is done after training, so as to not affect the hyperparameters learned, but before prediction.

where td=Δ−δ/3; here Δ is the mixing time and δ the pulse duration. The latent signal was corrupted with Rician noise with scale parameter σ=0.01 to yield the simulated signal. We used the same experimental parameters as in the the Human Connectome data described in the next section. The hyperparameters were optimized on a set of 100 Gaussian mixtures with randomly sampled crossing angles. Figure 1 compares exact and reconstructed EAPs for ϕ=30∘,60∘,90∘. We compare with using linear interpolation as in Hybrid Diffusion Imaging (HYDI) [9]. Table 1 shows the relative error in the estimation of the return-to-origin probability, P(0), which is a scalar index indicative of the underlying structure.

3.2 Reconstruction of subsampled in vivo data

To illustrate that the proposed method performs well even as the data is severely undersampled, we randomly exclude an equal fraction of measurements from each shell and instead estimate the signal value. To compensate for statistical fluctuations due to the sampling, we averaged the errors over 10 realizations. The hyperparameters were optimized on a set of 100,000 voxels from the same subject. Figure 2 shows the average differences between measurements and estimates as computed on another set of 10,000 voxels from the same subject. Also here, we compare with linear interpolation [9].

From figure 2, it is clear that our method is superior to linear interpolation and performs well even when the data is drastically undersampled, e.g. 20% of the gradient orientations gives comparable performance as when having 95 %.

We expected the errors in figure 2 to decay monotonically to a constant, noise-dependent, value. So, the poor performance of the interpolation at b=3000 s/mm2 warrants an explanation. A closer inspection (not shown) reveals that the interpolation consistently overestimates the signal in this shell. This is due to HCP’s sampling pattern (same gradient orientations used in multiple shells), which leads to a predominantly radial interpolation. However, the signal decay is convex in this range, so linear interpolation yields an overestimation of the signal. It is likely that other sampling schemes could alleviate this problem [21, 22]. The same could also be said if the aim is to reconstruct the orientation distribution function (ODF) instead of the EAP.

Figure 1 shows that the reconstructed EAPs are similar to the exact EAP, albeit somewhat smoother. Qualitatively, the EAPs reconstructed using our method and linear interpolation appear very similar, but table 1 shows that our method gives a considerably more accurate estimate of the return-to-origin probability. We hypothesize that even better reconstructions would be achievable if the sampling pattern was optimized considering the inherent covariance structure of the signal.

For computational efficiency, we assumed that voxels can be treated independently. It is, however, straightforward to encode spatial dependence through the covariance function.

In conclusion, we have used a Gaussian process framework to estimate the diffusion MRI signal and reconstruct the EAP. We have demonstrated the efficacy of the estimation on non-uniform, drastically undersampled in vivo data. We envision the method as a potential replacement for standard diffusion spectrum imaging when acquistion time is limited.