We explore the class of exponential integrators known as exponential time differencing (ETD) method in this letter to design low complexity nonlinear Fourier transform (NFT) algorithms that compute discrete approximations of the scattering coefficients in terms of the Chebyshev polynomials for real values of the spectral parameter. In particular, we discuss ETD Runge-Kutta methods which yield algorithms with complexity O(N^2N) (where N is the number of samples of the signal) and an order of convergence that matches the underlying one-step method. 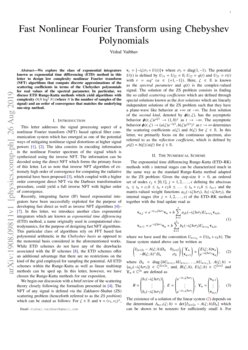 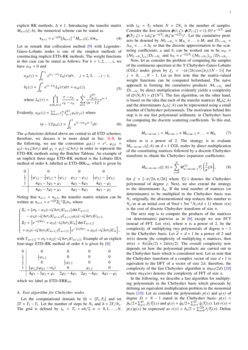 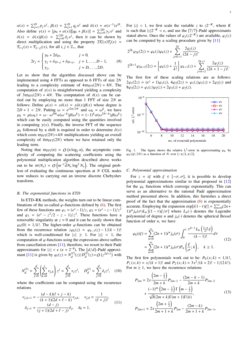 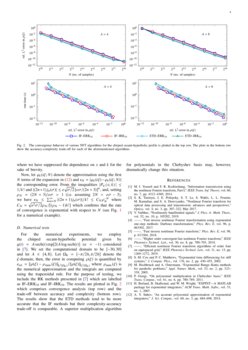 In this letter, we present a fast and well-conditioned spectral method b...
Vishal Vaibhav, et al. ∙

In this paper, we present a Chebyshev based spectral method for the comp...
Vishal Vaibhav, et al. ∙

In this work, we consider the complexity and throughput limits of the Fa...
Saulo Queiroz, et al. ∙

This letter addresses the signal processing aspect of a nonlinear Fourier transform (NFT) based optical fiber communication system which has emerged as one of the potential ways of mitigating nonlinear signal distortions at higher signal powers [1, 2]. The idea consists in encoding information in the nonlinear Fourier spectrum of the signal which is synthesized using the inverse NFT. The information can be decoded using the direct NFT which forms the primary focus of this letter. Let us note that inverse NFT algorithm of extremely high order of convergence for computing the radiative potential have been proposed [3], which coupled with a higher order convergent direct NFT via the Darboux transformation procedure, could yield a full inverse NFT with higher order of convergence.

Recently, integrating factor (IF) based exponential integrators have been successfully exploited for the purpose of developing fast direct as well as inverse NFT algorithms [4, 5, 6, 7]. In this letter, we introduce another class exponential integrators which are known as exponential time differencing (ETD) method, a name originally used in computational electrodynamics, for the purpose of designing fast NFT algorithms. This particular class of algorithms rely on FFT based fast polynomial arithmetic in the Chebyshev basis as opposed to the monomial basis considered in the aforementioned works. While ETD schemes do not have any of the drawbacks associated with the IF schemes [8], the ETD schemes offer an additional advantage that there are no restrictions on the kind of the grid employed for sampling the potential. All ETD schemes within the Runge-Kutta as well as linear multistep methods can be sped up. In this letter, however, we have chosen the Runge-Kutta methods for our exposition.

We begin our discussion with a brief review of the scattering theory closely following the formalism presented in [4]. The NFT of any signal is defined via the Zakharov-Shabat (ZS) scattering problem (henceforth referred to as the ZS problem) which can be stated as follows: For ζ∈R and v=(v1,v2)⊺, vt=[−iζσ3+U(t)]v where σ3=diag(1,−1). The potential U(t) is defined by U11=U22=0,U12=q(t) and U21=r(t) with r=αq∗ (α∈{+1,−1}). Here, ζ∈R is known as the spectral parameter and q(t) is the complex-valued signal. The solution of the ZS problem consists in finding the so called scattering coefficients which are defined through special solutions known as the Jost solutions which are linearly independent solutions of the ZS problem such that they have a plane-wave like behavior at +∞ or −∞. The Jost solution of the second kind, denoted by ϕ(t,ζ), has the asymptotic behavior ϕ(t;ζ)eiζt→(1,0)⊺ as t→−∞. The asymptotic behavior ϕ(t;ζ)→(a(ζ)e−iζt,b(ζ)eiζt)⊺ as t→∞ determines the scattering coefficients a(ζ) and b(ζ) for ζ∈R. In this letter, we primarily focus on the continuous spectrum, also referred to as the reflection coefficient, which is defined by ρ(ξ)=b(ξ)/a(ξ) for ξ∈R.

The exponential time differencing Runge-Kutta (ETD–RK) methods with s internal stages can be characterized much in the same way as the standard Runge-Kutta method adapted to the ZS problem: Given the step-size h>0, an ordered set of nodes cj∈[0,1],j=1,2,…,s defining the abscissas tn≤tn+c1h≤tn+c2h≤…≤tn+csh≤tn+1 and the matrix-valued weight functions aij(−iζhσ3), bi(−iζhσ3), the internal stages (for j=1,2,…,s) of the ETD–RK method together with the final update read as

where we have used the convention Un+ck=U(tn+ckh). The linear system stated above can be written as

The existence of a solution of the linear system (2) depends on the determinant Δn+1(ζ;h)=det[I2s×2s−A(ζ;h)Dn] which can be shown to be nonzero for sufficiently small h. For explicit RK methods, Δ≡1. Introducing the transfer matrix Mn+1(ζ;h), the numerical scheme can be stated as

Let us remark that collocation method [9] with Legendre–Gauss–Lobatto nodes is one of the simplest methods of constructing implicit ETD–RK methods. The weight functions in this case can be stated as follows: For k=1,2,…,s, we have a1k=0 and

The φ-functions defined above are central to all ETD schemes; therefore, we discuss it in more detail in Sec. II-B. In the following, we use the convention φ0(z)=ez, φj,k=φj(−ickζhσ3) and φj=φj(−iζhσ3) in order to represent the ETD–RK methods using the Butcher Tableau. An example of an implicit three-stage ETD–RK method is the Lobatto IIIA method of order 4, labelled as ETD–IRK34, which is given by

Noting that vn+1=vn,3, the transfer matrix relation can be written as vn+1=e−iζhΞ−11Ξ2vn where

which we label as ETD–ERK34.

Now, let us consider the problem of computing the samples of the continuous spectrum at the N Chebyshev-Gauss-Lobatto (CGL) nodes given by ξj=−(π/2h)cos[πj/(N−1)] for j=0,…,N−1. Let us first note that the matrix-valued weight functions can be computed beforehand. The naive approach to forming the cumulative products M1→Ns and D1→Ns by direct multiplication evidently yields a complexity of O(NsN)=O(N2). The fast algorithm, on the other hand, is based on the idea that each of the transfer matrices Mn(ζ;h) and the determinants Δn(ζ;h) can be represented using a small number of Chebyshev polynomials. The motivation behind this step is to use fast polynomial arithmetic in Chebyshev basis for computing the discrete scattering coefficients. To this end, define

where m is a power of 2. The strategy is to evaluate Mn→n+m−1(ξ;h) on d+1 CGL nodes by direct multiplication of the constituting matrices followed by a discrete Chebyshev transform to obtain the Chebyshev expansion coefficients:

for ξ∈[−π/2h,π/2h] where Tj(⋅) denotes the Chebyshev polynomial of degree j. Next, we also extend the strategy to the determinants Δn. If the total number of matrices (or determinants) to be multiplied in the Chebyshev basis was Ns originally, the aforementioned step reduces this number to Ns/m at an initial cost of 9md+5m−1Nsν(d+1) where ν(n) is the cost of discrete Chebyshev transform of size n.

. The overall complexity now depends on how the polynomial products are carried out in the Chebyshev basis which is considered next. Let us note that the Chebyshev transform of a complex vector of size

leading to a complexity estimate of

4ϖFFT(2N)+8N. The computation of γ(x) is straightforward yielding a complexity of 3ϖFFT(2N)+4N. The computation of δ(x) can be carried out by employing no more than 1 FFT of size 2N as follows: Define μ(x)=xδ(x)=x¯α(x)β(x) whose degree is 2D+1<2N. Putting ω=ei2π/2N and ωk=ωk, we have μk=μ(ωk)=ω⋅ωDkα(ω−k)β(ωk)=(−1)kα(ω2N−k)β(ωk) which can be easily computed using the quantities involved in computing γ(x). Finally, the inverse FFT of the sequence μk followed by a shift is required in order to determine δ(x) which costs ϖFFT(2N)+4N multiplications yielding an overall complexity of 4ϖFFT(2N) where we have retained only the leading term.

Noting that ϖFFT(n)=O(nlog2n), the asymptotic complexity of computing the scattering coefficients using the polynomial multiplication algorithm described above works out to be ϖ(Ns)=O(m−1¯¯¯dNslog2Ns). The original problem of evaluating the continuous spectrum at N CGL nodes now reduces to carrying out an inverse discrete Chebyshev transform.

Ii-B The exponential functions in ETD

In ETD–RK methods, the weights turn out to be linear combinations of the so-called φ–functions defined by (6). The first few of these functions are φ1=(ez−1)/z, φ2=(ez−z−1)/z2 and φ3=(ez−z2/2−z−1)/z3. These functions have a removable singularity at z=0 and it can be easily shown that φk(0)=1/k!. The higher-order φ-functions can be obtained from the recurrence relation zφk(z)=φk−1(z)−1/(k−1)! which is well-conditioned for |z|≥1. For |z|<1, the computation of φ-functions using the expressions above suffers from cancellation errors [11]

; therefore, we resort to their Padé approximants for

where the coefficients can be computed using the recurrence relations

For z=iξ with ξ∈[−σ,σ], it is possible to develop polynomial approximations similar to that proposed in [12] for the φk functions which converge exponentially. This can serve as an alternative to the rational Padé approximation method presented above. In addition, this furnishes a direct proof of the fact that the approximation (8) is exponentially accurate. Employing the expansion exp[i(1−τ)ξ]=∑∞n=0(2n+1)injn(σ)Ln[(1−τ)ξ/σ] where Ln(⋅) denotes the Legendre polynomial of degree n and jn(⋅) denotes the spherical Bessel function of order n, we have

where we have suppressed the dependence on x and k for the sake of brevity.

For the numerical experiments, we employ the chirped secant-hyperbolic potential given by q(t)=Asech(t)exp[2iAlogsech(t)] (α=−1) considered in [7]. We set the computational domain to be [−30,30] and let A∈{4,8}. Let Ωh=[−π/2h,π/2h] denote the ξ-domain; then, the error in computing ρ(ξ) is quantified by erel.=∥ρ(ξ)−ρnum.(ξ)∥L2(Ωh)/∥ρ(ξ)∥L2(Ωh) where ρnum.(ξ) is the numerical approximation and the integrals are computed using the trapezoidal rule. For the purpose of testing, we include the RK methods presented in [7] which are labelled as IF–ERK34 and IF–IRK34. The results are plotted in Fig. 2 which comprises convergence analysis (top row) and the trade-off between accuracy and complexity (bottom row). The results show that the ETD methods tend to be more accurate that the IF methods but their complexity-accuracy trade-off is comparable. A superior multiplication algorithm for polynomials in the Chebyshev basis may, however, dramatically change this situation.