We developed fast direct solver for 3D Helmholtz and Maxwell equations in layered medium. The algorithm is based on the ideas of cyclic reduction for separable matrices. For the grids with major uniform part (within the survey domain in the problems of geophysical prospecting, for example) and small non-uniform part (PML and coarsening to approximate problems in infinite domain) the computational cost of our approach is O(N_xN_ylog(N_xN_y)N_z). For general non-uniform grids the cost is O(N^3/2_xN^3/2_yN_z). The first asymptotics coincide with the cost of FFT-based methods, which can be applied for uniform gridding (in x and y) only. Our approach is significantly more efficient compared to the algorithms based on discrete Fourier transform which cost is O(N^2_xN^2_yN_z). The algorithm can be easily extended for solving the elasticity problems as well. 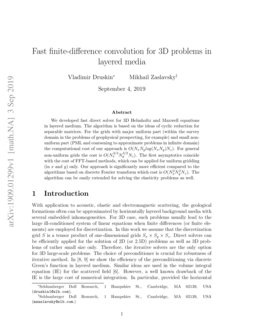 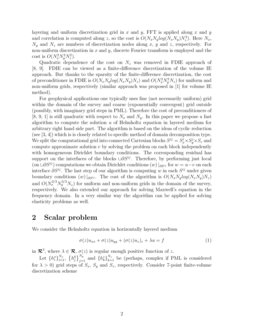 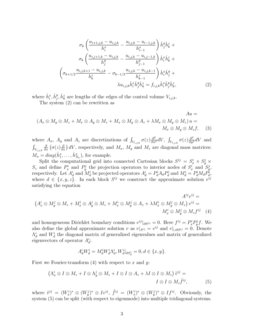 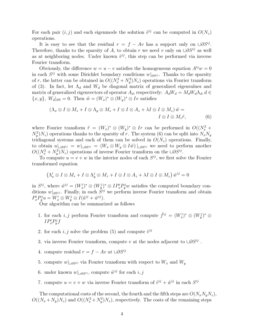 With application to acoustic, elastic and electromagnetic scattering, the geological formations often can be approximated by horizontally layered background media with several embedded inhomogeneities. For 3D case, such problems usually lead to the large ill-conditioned system of linear equations when finite differences (or finite elements) are employed for discretization. In this work we assume that the discretization grid S

is a tensor product of one-dimensional grids

Sx×Sy×Sz. Direct solvers can be efficiently applied for the solution of 2D (or 2.5D) problems as well as 3D problems of rather small size only. Therefore, the iterative solvers are the only option for 3D large-scale problems. The choice of preconditioner is crucial for robustness of iterative method. In [8, 9] we show the efficiency of the preconditioning via discrete Green’s function in layered medium. Similar ideas are used in the volume integral equation (IE) for the scattered field [6]. However, a well known drawback of the IE is the large cost of numerical integration. In particular, provided the horizontal layering and uniform discretization grid in x and y, FFT is applied along x and y and correlation is computed along z, so the cost is O(NxNylog(NxNy)N2z). Here Nx, Ny and Nz are numbers of discretization nodes along x, y and z, respectively. For non-uniform discretization in x and y, discrete Fourier transform is employed and the cost is O(N2xN2yN2z).

Quadratic dependence of the cost on Nz was removed in FDIE approach of [8, 9]. FDIE can be viewed as a finite-difference discretization of the volume IE approach. But thanks to the sparsity of the finite-difference discretization, the cost of preconditioner in FDIE is O(NxNylog(NxNy)Nz) and O(N2xN2yNz) for uniform and non-uniform grids, respectively (similar approach was proposed in [1] for volume IE method).

For geophysical applications one typically uses fine (not necessarily uniform) grid within the domain of the survey and coarse (exponentially convergent) grid outside (possibly, with imaginary grid steps in PML). Therefore the cost of preconditioners of [8, 9, 1] is still quadratic with respect to Nx and Ny. In this paper we propose a fast algorithm to compute the solution u of Helmholtz equation in layered medium for arbitrary right hand side part. The algorithm is based on the ideas of cyclic reduction (see [3, 4]) which is is closely related to specific method of domain decomposition type. We split the computational grid into connected Cartesian blocks Sij=Six×Sjy×Sz and compute approximate solution v by solving the problem on each block independently with homogeneous Dirichlet boundary conditions. The corresponding residual has support on the interfaces of the blocks ∪∂Sij. Therefore, by performing just local (on ∪∂Sij) computations we obtain Dirichlet conditions (w)|∂Sij for w=u−v on each interface ∂Sij. The last step of our algorithm is computing w in each Sij under given boundary conditions (w)|∂Sij. The cost of the algorithm is O(NxNylog(NxNy)Nz) and O(N3/2xN3/2yNz) for uniform and non-uniform grids in the domain of the survey, respectively. We also extended our approach for solving Maxwell’s equation in the frequency domain. In a very similar way the algorithm can be applied for solving elasticity problems as well.

We consider the Helmholtz equation in horizontally layered medium

where ^hxi,^hyj,^hzk are lengths of the edges of the control volume Vi,j,k.

The system (2) can be rewritten as

where Ax, Ay and Az are discretizations of ∫Vi,j,kσ(z)∂2∂x2dV, ∫Vi,j,kσ(z)∂2∂y2dV and ∫Vi,j,k∂∂z(σ(z)∂∂z)dV, respectively, and Mx, My and Mz are diagonal mass matrices: Mx=diag(^hx1,…,^hxNx), for example.

Split the computational grid into connected Cartesian blocks Sij=Six×Sjy×Sz and define Pix and Pjy the projection operators to interior nodes of Six and Sjy, respectively. Let Aid and Mid be projected operators Aid=PidAdPid and Mid=PidMdPid, where d∈{x,y,z}. In each block Sij we construct the approximate solution vij satisfying the equation

First we Fourier-transform (2) with respect to x and y:

where ~vij=(Wix)∗⊗(Wjy)∗⊗Ivij, ~fij=(Wix)∗⊗(Wjy)∗⊗Ifij. Obviously, the system (2) can be split (with respect to eigenmode) into multiple tridiagonal systems. For each pair (i,j) and each eigenmode the solution ~vij can be computed in O(Nz) operations.

It is easy to see that the residual r=f−Av has a support only on ∪∂Sij. Therefore, thanks to the sparsity of A, to obtain r we need v only on ∪∂Sij as well as at neighboring nodes. Under known ~vij, this step can be performed via inverse Fourier transform.

Obviously, the difference w=u−v satisfies the homogeneous equation Aijw=0 in each Sij with some Dirichlet boundary conditions w|∂Sij. Thanks to the sparsity of r, the latter can be obtained in O((N2x+N2y)Nz) operations via Fourier transform of (2). In fact, let Λd and Wd be diagonal matrix of generalized eigenvalues and matrix of generalized eigenvectors of operator Ad, respectively: AdWd=MdWdΛd,d∈{x,y}, Wd|∂S=0. Then ~w=(Wx)∗⊗(Wy)∗⊗Iv satisfies

To compute u=v+w in the interior nodes of each Sij, we first solve the Fourier transformed equation

in Sij, where ~wij=(Wix)∗⊗(Wjy)∗⊗IPixPjyw satisfies the computed boundary conditions w|∂Sij. Finally, in each Sij we perform inverse Fourier transform and obtain PixPjyu=Wix⊗Wjy⊗I(~uij+~wij).

Our algorithm can be summarized as follows

The computational costs of the second, the fourth and the fifth steps are O(NxNyNz), O((Nx+Ny)Nz) and O((N2x+N2y)Nz), respectively. The costs of the remaining steps of the algorithm depend on how we split our grid S into blocks Sij. For the case of uniform grids in the domain of the survey we split each of Sd,d∈{x,y} into three subgrids: S1d and S3d correspond to the non-uniform exponentially convergent grids and S2d covers the uniform part. To maintain the same approximation error within the domain of the survey and outside, further we assume that the number of nodes in exponentially convergent grids along x and y is proportional to logarithm of uniform parts of Sx and Sy, respectively. For the case of general non-uniform grids we split Sd (d∈{x,y}) into √Nd subgrids with √Nd nodes in each of them. For the first type of gridding we compute Fourier transforms in uniform parts via FFT. Therefore, the costs of the first, the sixth and the seventh steps are O(NxNylog(NxNy)Nz). For general non-uniform gridding, the cost of Fourier transforms on each Sij is O((√Nx)2(√Ny)2Nz) and the total number of blocks is √Nx√Ny. Hence, the overall costs of the first, the sixth and the seventh steps are O(N3/2xN3/2yNz). The cost of the third step is O(NxNyNz) and O((N3/2x+N3/2y)Nz) for two type of griddings above.

By extending our approach to multi-level cyclic reduction (i.e. by employing multiple mutually embedded partitions of S), we can reduce the asymptotics of the cost from N3/2 to Nlog(N) along each direction. But the constant factor is significantly greater due to multiple (on each level of embedding) solution of block-tridiagonal systems.

Consider the Maxwell equation for magnetic field in the layered medium:

Here we made an assumption of negligible displacement current which is typical for large-scale problems of geophysical prospecting.

Following [2], we discretize Maxwell equations using Lebedev grid [5], which is the counterpart of the Yee grid [7] for anisotropic problems.

We consider a bounded computational domain Ω=[x1,xNx]×[y1,yNy]×[z1,zNz] and introduce a Cartesian three-dimensional (3D) grid as follows:

where ri,j,k=(xi,yj,zk), Nx, Ny and Nz are the number of grid nodes in the x−, y− and z−directions. The Lebedev P-grid is defined as a sub-grid of M with even sum of indices (i+j+k) and the Lebedev R-grid contains the remaining nodes of M. For example, for even k the grid in the xy−plane is shown in Fig. 1.

with even and odd indices, respectively. Therefore, in the

Let all three components of the finite-difference vector magnetic field

-grid. Hence there is no need to perform any interpolation with our scheme to handle anisotropic Ohm’s law. We define finite-difference derivatives on both grids along the

and similarly along y− and z−direction. Note that equation (9) performs mapping from P-grid to R-grid and vice versa. This allows us to obtain a self-consistent discrete system of Maxwell equations

here we use the same notations for discrete fields as for continuous ones.

The boundary of the computational domain ∂Ω contains nodes of both P- and R-grids. We replace the boundary conditions at infinity by:

As pointed out in [2], this allows us to decrease the computational domain by a factor of 2 (compared to the conventional boundary conditions H|∂Ω=0 or E|∂Ω=0) without losing accuracy.

Consider the Fourier transform (with respect to x and y) of equations (3). Due to presence of mixed derivatives in (3), the equations in Fourier domain can not be represented in such a simple Krononecker product form as (2). According to the definition of the Lebedev grid, for even z grid node k in the xy-plane, the magnetic field is defined on a tensor product of two primary grids and a tensor product of two dual grids. Denote them by Hpp and Hdd, where the first and second indices mean the type of the grid along x and y, respectively. Similarly, Hpd and Hdp are defined for odd k

. Define eigenvalues and eigenfunctions of 1D operators on each grid with Dirichlet conditions on primary grid and Neumann conditions on dual grid:

where α,β∈{p,d}. One can derive the relations between primary and dual eigenfunctions: ϕd,l=λlϕp,lx and ψd,m=νmψp,my. For each k, we expand H and f as a sum

Here αβ∈{pp,dd} for even k and αβ∈{pd,dp} for odd k. In this case, the equations for the expansion coefficients have the following form (we omit the indices l and m of λ, ν, ~f and ~H to be more concise):

For even k and for the primary-primary grid:

Here and below cki=ci(zk) and finite-difference derivatives are defined by (9). For even k and for the dual-dual grid:

For odd k and for the primary-dual grid:

Finally for odd k and for the dual-primary grid: