When EAs are unlikely to locate precise global optimal solutions with satisfactory performances, it is important to substitute the hitting time/running time analysis with another available theoretical routine. In order to bring theories and applications closer, this paper is dedicated to perform an analysis on approximation error of EAs. First, we proposed a general result on upper bound and lower bound of approximation errors. Then, several case studies are performed to present the routine of error analysis, and consequently, validate its applicability on cases generating transition matrices of various shapes. Meanwhile, the theoretical results also show the close connections between approximation errors and eigenvalues of transition matrices. The analysis validates applicability of error analysis, demonstrates significance of estimation results, and then, exhibits its potential to be applied for theoretical analysis. 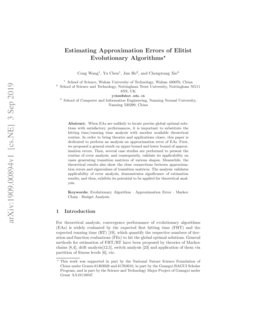 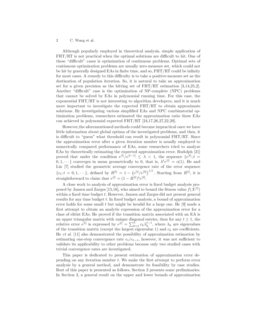 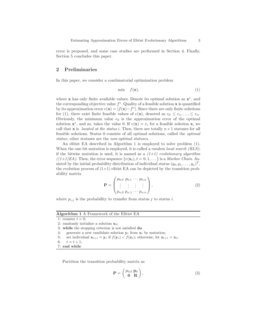 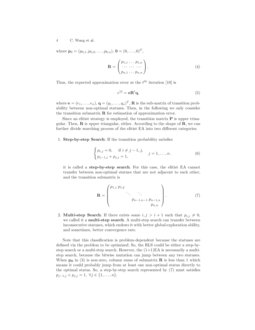 For theoretical analysis, convergence performance of evolutionary algorithms (EAs) is widely evaluated by the expected first hitting time (FHT) and the expected running time (RT) [19], which quantify the respective numbers of iteration and function evaluations (FEs) to hit the global optimal solutions. General methods for estimation of FHT/RT have been proposed by theories of Markov chains [8, 4], drift analysis[12, 5], switch analysis [23] and application of them via partition of fitness levels [6], etc.

Although popularly employed in theoretical analysis, simple application of FHT/RT is not practical when the optimal solutions are difficult to hit. One of these “difficult” cases is optimization of continuous problems. Optimal sets of continuous optimization problems are usually zero-measure set, which could not be hit by generally designed EAs in finite time, and so, FHT/RT could be infinity for most cases. A remedy to this difficulty is to take a positive-measure set as the destination of population iteration. So, it is natural to take an approximation set for a given precision as the hitting set of FHT/RT estimation [3, 14, 25, 2]

. Another “difficult” case is the optimization of NP-complete (NPC) problems that cannot be solved by EAs in polynomial running time. For this case, the exponential FHT/RT is not interesting to algorithm developers, and it is much more important to investigate the expected FHT/RT to obtain approximate solutions. By investigating various simplified EAs and NPC combinatorial optimization problems, researchers estimated the approximation ratio these EAs can achieved in polynomial expected FHT/RT

However,the aforementioned methods could become impractical once we have little information about global optima of the investigated problems, and then, it is difficult to “guess” what threshold can result in polynomial FHT/RT. Since the approximation error after a given iteration number is usually employed to numerically compared performance of EAs, some researchers tried to analyze EAs by theoretically estimating the expected approximation error. Rudolph [21] proved that under the condition e[t]/e[t−1]≤λ<1, the sequence {e[t];t=0,1,⋯} converges in mean geometrically to 0, that is, λte[t]=o(1). He and Lin [7] studied the geometric average convergence rate of the error sequence {et;t=0,1,⋯}, defined by R[t]=1−(e[t]/e[0])1/t. Starting from R[t], it is straightforward to claim that e[t]=(1−R[t])te[0].

A close work to analysis of approximation error is fixed budget analysis proposed by Jansen and Zarges [15, 16], who aimed to bound the fitness value f(X[t]) within a fixed time budget t. However, Jansen and Zarges did not present general results for any time budget t. In fixed budget analysis, a bound of approximation error holds for some small t but might be invalid for a large one. He [9] made a first attempt to obtain an analytic expression of the approximation error for a class of elitist EAs. He proved if the transition matrix associated with an EA is an upper triangular matrix with unique diagonal entries, then for any t≥1, the relative error e[t] is expressed by e[t]=∑Lk=1ckλt−1k, where λk are eigenvalues of the transition matrix (except the largest eigenvalue 1) and ck are coefficients. He et al. [11] also demonstrated the possibility of approximation estimation by estimating one-step convergence rate et/et−1, however, it was not sufficient to validate its applicability to other problems because only two studied cases with trivial convergence rates are investigated.

This paper is dedicated to present estimation of approximation error depending on any iteration number t. We make the first attempt to perform error analysis by a general method, and demonstrate its feasibility by case studies. Rest of this paper is presented as follows. Section 2 presents some preliminaries. In Section 3, a general result on the upper and lower bounds of approximation error is proposed, and some case studies are performed in Section 4. Finally, Section 5 concludes this paper.

In this paper, we consider a combinatorial optimization problem

An elitist EA described in Algorithm 1 is employed to solve problem (1). When the one-bit mutation is employed, it is called a random local search (RLS); if the bitwise mutation is used, it is named as a (1+1) evolutionary algorithm ((1+1)EA). Then, the error sequence {e(xt),t=0,1,…} is a Markov Chain

. Assisted by the initial probability distribution of individual status

(q0,q1,…,qn)T, the evolution process of (1+1) elitist EA can be depicted by the transition probability matrix

where pi,j is the probability to transfer from status j to status i.

Partition the transition probability matrix as

Thus, the expected approximation error at the tth iteration [10] is

where e=(e1,…,en), q=(q1,…,qn)T, R is the sub-matrix of transition probability between non-optimal statuses. Then, in the following we only consider the transition submatrix R for estimation of approximation error.

Since an elitist strategy is employed, the transition matrix P is upper triangular. Then, R is upper triangular, either. According to the shape of R, we can further divide searching process of the elitist EA into two different categories.

Note that this classification is problem-dependent because the statuses are defined via the problem to be optimized. So, the RLS could be either a step-by-step search or a multi-step search. However, the (1+1)EA is necessarily a multi-step search, because the bitwise mutation can jump between any two statuses. When p0 in (3) is non-zero, column sums of submatrix R is less than 1 which means it could probably jump from at least one non-optimal status directly to the optimal status. So, a step-by-step search represented by (7) must satisfies pj−1,j+pj,j=1,∀j∈{1,…,n}.

3.1 General Bounds of the Step-by-step Search

This lemma could be proved by mathematical induction.

If we enlarge or shrink all eigenvalues to the maximum value and the minimum value, respectively, we can get two transition submatrices R(λmax) and R(λmin), where

The expected approximation error e[t]=eRtq is bounded by

Theorem 3.1 provides a general result about the upper and the lower bounds of approximation error. From the above arguments we can figure out that the lower bounds and the upper bounds can be achieved once the transition submatrix R degenerates to R(λmax) and R(λmin), respectively. That is to say, they are indeed the “best” results about the general bounds. Recall that λi=pi,i. Starting from the ith status, pi,i is the probability that the (1+1) elitist EA stays at the ith status after one iteration. Then, greater λi is, harder the step-by-step search transfers to the sub-level status i−1. So, performance of a step-by-step search depicted by R, for the worst case, would not be worse than that of R(λmax); meanwhile, it would not be better than that of R(λmin), which is a bottleneck for improving performance of the step-by-step search.

Denoting the transition submatrix of a multi-step search as

we can bound its approximation error by defining two transition matrices

), respectively. Given any sorted vector

It is trivial to prove that eRSltq≤eRMtq. Because RSl has part of non-zero elements of RM, eRSltq is a partial sum of eRMtq. Since all items of eRMtq is nonnegative, it holds that eRSltq≤eRMtq. The second inequality can be proved by mathematical induction.

In conclusion, it holds that eRMtq≤eRSutq,∀t>0.

From Lemma 2 we know that

Moreover, By Theorem 3.1 we know that

Theorems 3.1 and 3.2 show that computation of general bounds for approximation errors is based on the computability of eRt(λ)q and eRSltq, where Rt(λ) and RSl are defined by (13) and (17), respectively.

In section 3 general bounds of approximation error are obtained by ignoring most of elements in the sub-matrix R. Thus, these bounds could be very general but not tight. In this section, we would like to perform several case-by-case studies to demonstrate a possible unverse method for error analysis, where the RLS and (1+1)EA are employed solving the popular OneMax problem and the Needle-in-Haystack prlbem.

4.1 Error Estimation for the OneMax Problem

Application of RLS on the unimodal OneMax problem generates a step-by-step search, the transition submatrix of which is

Eigenvalues and corresponding eigenvectors of

Note that RS has n distinct eigenvalues, and so, can be diagonalized [18]. Then, we would like to estimate the approximation error by diagonalizing the transition matrix RS.

The expected approximation error of RLS for the OneMax problem is

According to the definition of population status, we know that the status index i is the number of 0-bits in x. Once one of i 0-bits is flip to 1-bit and all 1-bits keep unchanged, the generated solution will be accepted, and the status transfers from i to i−1. Recalling that probability this case happen is in(1−1n)n−i, we know that

and we know that

With n distinct eigenvalues, RS can be diagonalized:

where Λ=diag(λ1,…,λn), P=(η1,…,ηn). λi and ηi are the eigenvalues and the corresponding eigenvectors:

It is obvious that P is invertible, and its inverse is

Similar to the result illustrated in (35), we know that

4.2 Error Estimation for the Needle-in-Haystack Problem

Landscape of the Needle-in-Haystack problem has a platform where all solutions have the same function value 0, and only the global optimum x∗=(0,…,0) has a non-zero function value 1. For this problem, the status i is defined as total number of 1-bits in a solutions x.

When the RLS is employed to solve the Needle-in-Haystack problem, the transition submatrix is

we can conclude that

Both the upper bound and the lower bound converge to the positive 1−n+12n. Because the RLS only searches adjacent statuses, it cannot converge to the optimal status once the initial solution is not located at statuses 1.

When the (1+1)EA is employed to solve the Needle-in-Haystack problem, the transition probability matrix is