Many biological processes involve synchronization between nonequivalent systems, i.e, systems where the difference is limited to a rather small parameter mismatch. The maintenance of the synchronized regime in this cases is energetically costly 1. This work studies the energy implications of synchronization phenomena in a pair of structurally flexible coupled neurons that interact through electrical coupling. We show that the forced synchronization between two nonidentical neurons creates appropriate conditions for an efficient actuation of adaptive laws able to make the neurons structurally approach their behaviours in order to decrease the flow of energy required to maintain the synchronization regime. 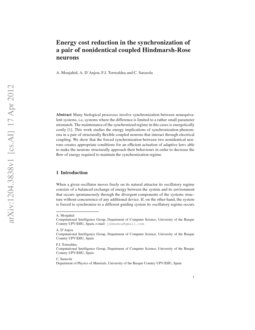 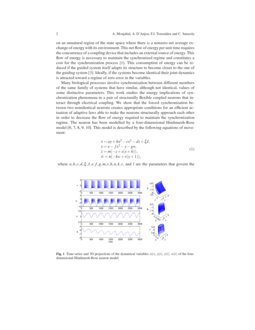 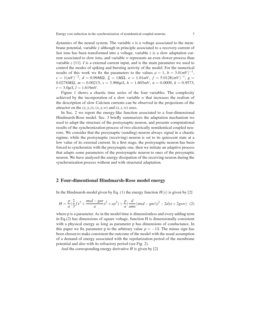 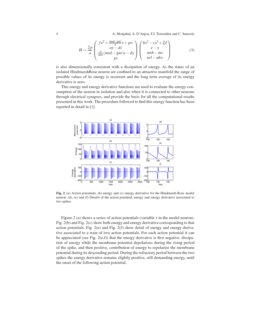 We show how coupling of local optimization processes can lead to better ...
J. A. K. Suykens, et al. ∙

Efficient ℤ_2 synchronization on ℤ^d under symmetry-preserving side information

Synchronization and Control for Multi-Weighted and Directed Complex Networks

The study of complex networks with multi-weights has been a hot topic re...
Xiwei Liu, et al. ∙

When a given oscillator moves freely on its natural attractor its oscillatory regime consists of a balanced exchange of energy between the system and its environment that occurs spontaneously through the divergent components of the system’s structure without concurrence of any additional device. If, on the other hand, the system is forced to synchronize to a different guiding system its oscillatory regime occurs on an unnatural region of the state space where there is a nonzero net average exchange of energy with its environment. This net flow of energy per unit time requires the concurrence of a coupling device that includes an external source of energy. This flow of energy is necessary to maintain the synchronized regime and constitutes a cost for the synchronization process 1 . This consumption of energy can be reduced if the guided system itself adapts its structure to become closer to the one of the guiding system 3 . Ideally, if the systems become identical their joint dynamics is attracted toward a regime of zero error in the variables.

Many biological processes involve synchronization between different members of the same family of systems that have similar, although not identical, values of some distinctive parameters. This work studies the energy implications of synchronization phenomena in a pair of structurally flexible coupled neurons that interact through electrical coupling. We show that the forced synchronization between two nonidentical neurons creates appropriate conditions for an efficient actuation of adaptive laws able to make the neurons structurally approach each other in order to decrease the flow of energy required to maintain the synchronization regime. The neuron has been modelled by a four-dimensional Hindmarsh-Rose model 6 ; 7 ; 8 ; 9 ; 10 . This model is described by the following equations of movement:

Figure 1 shows a chaotic time series of the four variables. The complexity achieved by the incorporation of a slow variable w that increases the realism of the description of slow Calcium currents can be observed in the projections of the attractor on the (x,y,z), (x,y,w) and (x,z,w) axes.

In the Hindmarsh-model given by Eq. (1) the energy function H(x) is given by 2

where p is a parameter. As in the model time is dimensionless and every adding term in Eq.(2) has dimensions of square voltage, function H is dimensionally consistent with a physical energy as long as parameter p has dimensions of conductance. In this paper we fix parameter p to the arbitrary value p=−1S. The minus sign has been chosen to make consistent the outcome of the model with the usual assumption of a demand of energy associated with the repolarization period of the membrane potential and also with its refractory period (see Fig. 2).

And the corresponding energy derivative ˙H is given by 2

is also dimensionally consistent with a dissipation of energy. As the states of an isolated Hindmarsh–Rose neuron are confined to an attractive manifold the range of possible values of its energy is recurrent and the long term average of its energy derivative is zero.

This energy and energy derivative functions are used to evaluate the energy consumption of the neuron in isolation and also when it is connected to other neurons through electrical synapses, and provide the basis for all the computational results presented in this work. The procedure followed to find this energy function has been reported in detail in

In this section we analyze the energy aspects of the synchronization of two nonidentical neurons coupled by an electrical synapse. The presynaptic neuron is set in the chaotic spiking-bursting regime corresponding to an external current I1=3.024. While the postsynaptic neuron is set to its quiescent state at a low value I2=0.85 of its external current. The two neurons are coupled unidirectionally according to the following equations:

where K1=0 and K2≥0 is the coupling strength. i,j=1,2;i≠j are the indices for the neurons. Note that the coupling affects only the first variables x2 of the postsynaptic neuron.

The coupling scheme given in Eq. 4 can be written in general terms as follows:

If the coupling strength K is large enough as to make the errors in the variables e=xk−y small, an operational law that adapts the parameters of the postsynaptic neuron to the ones of the presynaptic neuron is given by 3

denotes the vector of parameter errors, and the summation is over every component of the vector field

f. The above law is general and can be used to find specific adaptive laws to any kind of homochaotic systems provided they are coupled through a feedback scheme of large enough coupling strength.

In the following we analyse the change in the balance of energy of the postsynaptic neuron when its external current parameter is governed by an adaptive law in order to reach the nominal value of the external current in the presynaptic neuron. The adaptation law has been implemented following Eq. 6. For this experiment, we have used a coupling strength with value k=5. We started the adaptation procedure at t=100 and registered data between t=50 and 200 for proper observation of the evolution of both energy and energy derivative during the process. The registrated values has been averaged over a convenient length of time in order to avoid large fluctuations. The dissipated energy (energy derivative) has been averaged over five units of time, while the proper energy has been averaged over ten units of time.

Figure 3 shows the average values of both energy and energy derivative per unit time. In Fig. 3 (a) we can see that in a first stage (t<100), the receiving neuron is forced to synchronize with the sending neuron, and oscillates in an unnatural region of the state space characterized by an average energy of about 66 (arb. units), and a nonzero energy derivative average of about 14 (arb. units), ie, a nonzero net average exchange of energy with its environment (see Fig 3 (b)). After adaptation take place, the two neurons become structurally close each other, and enter in a completely synchronized regime of balanced exchange of energy between the system and its environment corresponding to zero value of energy derivative (˙H=0).

Figure 5 shows average over five units of time of the energy derivative per unit time at different values of the coupling strength ranging from k=0 to k=2. When K=0, ie, no guidance at all, the receiving neuron moves on its natural region of state space and its averaged dissipated energy is zero. As soon as the coupling device is connected the average energy derivative per unit time becomes negative, that is, it start to dissipate on average an energy that the coupling device will have to provide in order to maintain the forced regime. The required energy increases with coupling strength as it can appreciated in Fig.5 (c). Once the adaptation process starts the average energy derivative quickly decreases to zero, reflecting the fact the receiving neuron has become structurally so close to the sending neuron that they can reach a regime of identical synchronization.