In this article, we review the analytical and numerical approaches for computing the phase space structures in two degrees-of-freedom Hamiltonian systems that arise in chemical reactions. In particular, these phase space structures are the unstable periodic orbit associated with an index-1 saddle, the periodic orbit dividing surface, and the stable and unstable invariant manifolds of the unstable periodic orbit. We review the approaches in the context of a two degrees-of-freedom Hamiltonian with a quartic potential coupled with a quadratic potential. We derive the analytical form of the phase space structures for the integrable case and visualize their geometry on the three dimensional energy surface. We then investigate the bifurcation of the dividing surface due to the changes in the parameters of the potential energy. We also review the numerical method of turning point and present its new modification called the turning point based on configuration difference for computing the unstable periodic orbit in two degrees-of-freedom systems. These methods are implemented in the open-source python package, UPOsHam <cit.>. 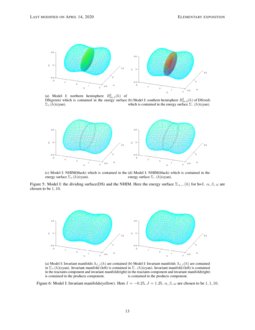 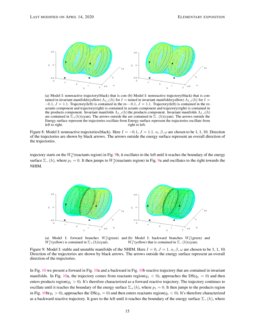 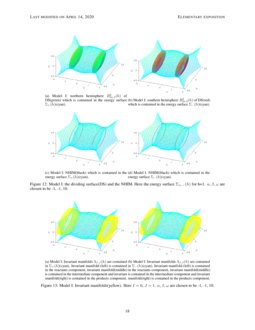 We develop a machine learning framework that can be applied to data sets...
Shibabrat Naik, et al. ∙

A physical self-learning machine can be defined as a nonlinear dynamical...
Victor Lopez-Pastor, et al. ∙

In this work, we present a nonlinear dynamics perspective on generating ...
Maximilian Raff, et al. ∙

Computing the degrees of freedom of rank-regularized estimators and cousins

Ptychography with an unknown probe and object is analyzed for the raster...
Albert Fannjiang, et al. ∙

Raster Grid Pathology and Other Ambiguities in Blind Ptychography

(this follows from the definition) and exist at one energy but their influence at non-zero momentum which corresponds to higher energies is affected by the periodic orbit associated with the equilibrium point. The periodic orbit associated with an index-1 saddle equilibrium point is classified as unstable and its generalization to high-dimensional (

N>2) phase space is called a Normally Hyperbolic Invariant Manifold (NHIM) [Wiggins1990, Wiggins1994]. The unstable periodic orbit (and its general form, NHIM) has been shown to be the appropriate phase space structure to construct a dividing surface that partitions the energy surface into the reactant and product regions and which is free of local recrossings [waalkens2004direct, Waalkens2005]. A phase space dividing surface leads to more accurate calculation of the reaction flux and rate constant in a chemical reaction [Ezra2009]. In this review, we illustrate the geometry of a phase space dividing surface by varying parameters of a potential energy surface. Thus, a dividing surface is the phase space structure (it is a dynamical object since momenta is taken into account) used in reaction rate calculations. In a sense this provides the local pictures of crossing the energetic barrier located by the saddle equilibrium point. However, another interest in studying chemical reactions is to test arbitrary configurations of a molecule for reactivity (potential of reaction in an environment). In this case, the global dynamics of the configurations needs to be understood and the appropriate phase space structures are the stable and unstable invariant manifolds of the unstable periodic orbit (NHIM in N-DOF systems) associated with the saddle equilibrium point. The stable and the unstable manifolds are codimension-1 in the energy surface and are impenetrable barriers [wiggins_impenetrable_2001] that partition trajectories with different dynamical fates.

In this review, we illustrate the geometry of the aforementioned phase space structures by using a two DOF model Hamiltonian where all the relevant structures can be calculated analytically. It is to be noted that linear Hamiltonian systems are considered as the first step [NHIMinchem, Geomodels] in these theory since only one equilibrium point, either a saddle × center or center × center, is possible. The natural next step is to consider a model nonlinear Hamiltonian by adding higher order terms in the potential energy function and thus allows for multiple equilibrium points. We consider a Hamiltonian (Eqn. (1)) with a quartic term in the potential energy function, V(q1), and use this Hamiltonian to discuss the associated phase space structures along with the visualizations. In particular, we obtain analytical expressions for the NHIM which is an unstable periodic orbit associated with the index-1 saddle equilibrium point which makes the visualization feasible in the three-dimensional energy surface of the two DOF Hamiltonian (Eqn. (1)). We demonstrate the bifurcation of the phase space DS as the parameters in the potential energy are varied and which can not happen in linear Hamiltonian systems. Next, we demonstrate numerical methods that need to be adopted when analytical expressions of the UPOs can not be obtained which is what happens in most realistic models of chemical reactions. Some of these numerical methods include differential correction and numerical continuation [naik_finding_2019b, Koon2011], multiple shooting [farantos_pomult_1998], turning point [Pollak1980], and turning point based on configuration difference [Lyu2020]. We describe the turning point methods for the model Hamiltonian in this article.

The Hamiltonian structure is given by

The Hamilton’s equations of H are given by:

Note that (⋅) stands for derivative with respect to time t.

Now we want to classify all equilibrium points and their stability associated to H. If we let

we can see that equilibrium points are

. The eigenvalues of the Jacobian associated to

H2 are ±iω and the eigenvalues λ of the Jacobian J associated to H1 are the solutions of the characteristic equation:

which imply that p1 is a constant, i.e. phase diagram is consisted of horizontal lines in p1−q1 plane.

In this case, our Hamiltonian H1 becomes

we only have one equilibrium point (¯q1,¯p1)=(0,0) and the eigenvalues of the Jacobian are λ=±√α . It’s exactly the same to what we have discussed before.

If α=0,β≠0, the Hamiltonian H1 becomes

Now we consider α,β≠0. The Hamiltonian H1 is

Recall that the eigenvalues of the Jacobian are λ=±√α−3βq21.

We have discussed the number and stability of the equilibrium points for different signs of α,β and therefore we can plot the Bifurcation diagram of the Hamiltonian H1 in β−α plane in Fig. 3.

Now we fix β>0 and increase the value α, we have 3 equilibrium points until α=0. As α evolves from negative to positive, (q1,p1)=(±√α/β,0) disappear and the origin is non hyperbolic when α=0 and becomes a hyperbolic saddle point when α>0. When β<0, α>0, we only have 1 equilibrium point and therefore we have Hamiltonian Pitchfork Bifurcation.

If we fix α>0 and increase β from negative to positive, we have 3 equilibrium points. The origin remains a saddle and two centres occur at (q1,p1)=(±√α/β,0). In this case, α>0,β>0, we still have Hamiltonian Pitchfork Bifurcation.

Finally, if we fix β>0 and let α decrease from positive to negative. We have 3 equilibrium points until α=0. The origin loses its hyperbolicity at α=0. When α<0, β>0, we have 1 centre equilibrium point again. Hamiltonian Pitchfork Bifurcation occurs for the same reason as above.

3.3 Visualisation of the phase space structures