Multiple wireless sensing tasks, e.g., radar detection for driver safety, involve estimating the "channel" or relationship between signal transmitted and received. In this work, we focus on a certain channel model known as the delay-doppler channel. This model begins to be useful in the high frequency carrier setting, which is increasingly common with developments in millimeter-wave technology. Moreover, the delay-doppler model then continues to be applicable even when using signals of large bandwidth, which is a standard approach to achieving high resolution channel estimation. However, when high resolution is desirable, this standard approach results in a tension with the desire for efficiency because, in particular, it immediately implies that the signals in play live in a space of very high dimension N (e.g.,  10^6 in some applications), as per the Shannon-Nyquist sampling theorem. To address this difficulty, we propose a novel randomized estimation scheme called Sparse Channel Estimation, or SCE for short, for channel estimation in the k-sparse setting (e.g., k objects in radar detection). This scheme involves an estimation procedure with sampling and space complexity both on the order of k(logN)^3, and arithmetic complexity on the order of k(log N)^3 + k^2, for N sufficiently large. To the best of our knowledge, Sparse Channel Estimation (SCE) is the first of its kind to achieve these complexities simultaneously – it seems to be extremely efficient! As an added advantage, it is a simple combination of three ingredients, two of which are well-known and widely used, namely digital chirp signals and discrete Gaussian filter functions, and the third being recent developments in sparse fast fourier transform algorithms. 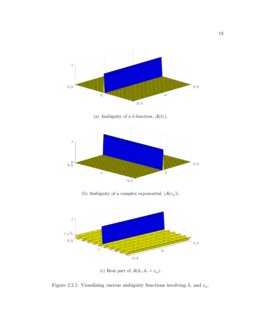