Gradual typing combines static and dynamic typing in the same program. One would hope that the performance in a gradually typed language would range between that of a dynamically typed language and a statically typed language. Existing implementations of gradually typed languages have not achieved this goal due to overheads associated with runtime casts. Takikawa et al. (2016) report up to 100× slowdowns for partially typed programs. In this paper we present a compiler, named Grift, for evaluating implementation techniques for gradual typing. We take a straightforward but surprisingly unexplored implementation approach for gradual typing, that is, ahead-of-time compilation to native assembly code with carefully chosen runtime representations and space-efficient coercions. Our experiments show that this approach achieves performance on par with OCaml on statically typed programs and performance between that of Gambit and Racket on untyped programs. On partially typed code, the geometric mean ranges from 0.42× to 2.36× that of (untyped) Racket across the benchmarks. We implement casts using the coercions of Siek, Thiemann, and Wadler (2015). This technique eliminates all catastrophic slowdowns without introducing significant overhead. Across the benchmarks, coercions range from 15 also implement the monotonic references of Siek et al. (2015). Monotonic references eliminate all overhead in statically typed code, and for partially typed code, they are faster than proxied references, sometimes up to 1.48×. 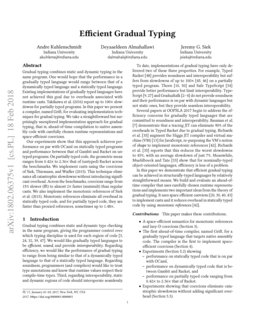 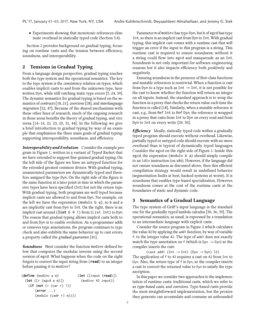 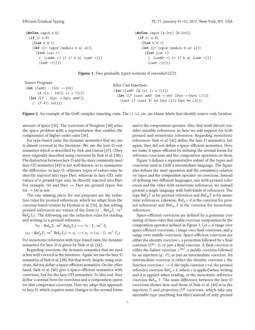 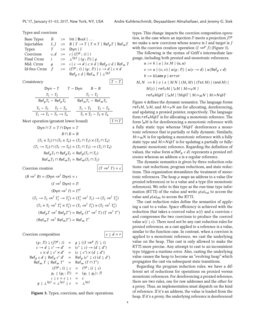 Gradual typing combines static and dynamic type checking in the same program, giving the programmer control over which typing discipline is used for each region of code (Anderson:2002kd; Siek:2006bh; Tobin-Hochstadt:2006fk; Gronski:2006uq; Matthews:2007zr). We would like gradually typed languages to be efficient, sound, and provide interoperability. Regarding efficiency, we would like the performance of gradual typing to range from being similar to that of a dynamically typed language to that of a statically typed language. Regarding soundness, programmers (and compilers) would like to trust type annotations and know that runtime values respect their compile-time types. Third, regarding interoperability, static and dynamic regions of code should interoperate seamlessly.

To date, implementations of gradual typing have only delivered two of these three properties. For example, Typed Racket (Tobin-Hochstadt:2008lr) provides soundness and interoperability but suffers from slowdowns of up to 100× (Takikawa:2015aa; Takikawa:2016aa) on a partially typed program. Thorn (Bloom:2009aa; Wrigstad:2010fk) and Safe TypeScript (Rastogi:2014aa) provide better performance but limit interoperability. TypeScript (Hejlsberg:2012aa; Bierman:2014aa) and Gradualtalk (Allende:2011fk; Allende:2012aa; Allende:2013aa) do not provide soundness and their performance is on par with dynamic languages but not static ones, but they provide seamless interoperability.

Several papers at OOPSLA 2017 begin to address the efficiency concerns for gradually typed languages that are committed to soundness and interoperability. Bauman:2017aa demonstrate that a tracing JIT can eliminate 90% of the overheads in Typed Racket due to gradual typing. Richards:2017aa augment the Higgs JIT compiler and virtual machine (VM) (Chevalier-Boisvert:2015aa) for JavaScript, re-purposing the VM’s notion of shape to implement monotonic references (Siek:2015aa). Richards:2017aa reports that this reduces the worst slowdowns to 45%, with an average slowdown of just 7%. Meanwhile, Muehlboeck:2017aa show that for nominally-typed object-oriented languages, efficiency is less of a problem.

In this paper we demonstrate that efficient gradual typing can be achieved in structurally-typed languages by relatively straightforward means. We build and evaluate an ahead-of-time compiler that uses carefully chosen runtime representations and implements two important ideas from the theory of gradual typing. It uses space efficient coercions (Siek:2009ys; Herman:2010aa; Garcia:2013fk; Siek:2015ab) to implement casts and it reduces overhead in statically typed code by using monotonic references (Siek:2015aa).

This paper makes these contributions.

Section 2 provides background on gradual typing, focusing on runtime casts and the tension between efficiency, soundness, and interoperability.

From a language design perspective, gradual typing touches both the type system and the operational semantics. The key to the type system is the consistency relation on types, which enables implicit casts to and from the unknown type, here written Dyn, while still catching static type errors (Anderson:2002kd; Siek:2006bh; Gronski:2006uq). The dynamic semantics for gradual typing is based on the semantics of contracts (Findler:2002es; Gray:2005ij), coercions (Henglein:1994nz), and interlanguage migration (Tobin-Hochstadt:2006fk; Matthews:2007zr). Because of the shared mechanisms with these other lines of research, much of the ongoing research in those areas benefits the theory of gradual typing, and vice versa (Guha:2007kl; Matthews:2008qr; Greenberg:2010lq; Dimoulas:2011fk; Strickland:2012fk; Chitil:2012aa; Dimoulas:2012fk; Greenberg:2015ab). In the following we give a brief introduction to gradual typing by way of an example that emphasizes the three main goals of gradual typing: supporting interoperability, soundness, and efficiency.

Consider the example program in Figure 1, written in a variant of Typed Racket that we have extended to support fine-grained gradual typing. On the left side of the figure we have an untyped function for the extended greatest common divisor. With gradual typing, unannotated parameters are dynamically typed and therefore assigned the type Dyn. On the right side of the figure is the same function at a later point in time in which the parameter types have been specified (Int) but not the return type. With gradual typing, both programs are well typed because implicit casts are allowed to and from Dyn. For example, on the left we have the expression (modulo b a), so b and a are implicitly cast from Dyn to Int. On the right, there is an implicit cast around (list b 0 1) from (List Int) to Dyn. The reason that gradual typing allows implicit casts both to and from Dyn is to enable evolution. As a programmer adds or removes type annotations, the program continues to type check and also exhibits the same behavior up to cast errors, a property called the gradual guarantee (Siek:2015ac).

Next consider the function modinv defined below that computes the modular inverse using the second version of egcd. What happens when the code on the right forgets to convert the input string from (read) to an integer before passing it to modinv?

Parameter m of modinv has type Dyn, but b of egcd has type Int, so there is an implicit cast from Dyn to Int. With gradual typing, this implicit cast comes with a runtime cast that will trigger an error if the input to this program is a string. This runtime cast is required to ensure soundness: without it a string could flow into egcd and masquerade as an Int. Soundness is not only important for software engineering reasons but it also impacts efficiency both positively and negatively.

Ensuring soundness in the presence of first-class functions and mutable references is nontrivial. When a function is cast from Dyn to a type such as Int→Int, it is not possible for the cast to know whether the function will return an integer on all inputs. Instead, the standard approach is to wrap the function in a proxy that checks the return value each time the function is called (Findler:2002es). Similarly, when a mutable reference is cast, e.g., from Ref Int to Ref Dyn, the reference is wrapped in a proxy that casts from Int to Dyn on every read and from Dyn to Int on every write (Herman:2006uq; Herman:2010aa).

Ideally, statically typed code within a gradually typed program should execute without overhead. Likewise, partially typed or untyped code should execute with no more overhead than is typical of dynamically typed languages. Consider the egcd on the right side of Figure 1. Inside this egcd, the expression (modulo b a) should simply compile to an idiv instruction (on x86). However, if the language did not ensure soundness as discussed above, then this efficient compilation strategy would result in undefined behavior (segmentation faults at best, hacked systems at worst). It is soundness that enables type-based specialization. However, soundness comes at the cost of the runtime casts at the boundaries of static and dynamic code.

3. Semantics of a Gradual Language

The type system of Grift’s input language is the standard one for the gradually typed lambda calculus (Siek:2006bh; Siek:2008aa; Herman:2010aa). The operational semantics, as usual, is expressed by a translation to an intermediate language with explicit casts.

Consider the source program in Figure 2 which calculates the value 42 by applying the add1 function, by way of variable f, to the integer value 41. The type of add1 does not exactly match the type annotation on f (which is Dyn => Dyn) so the compiler inserts the cast:

The application of f to 42 requires a cast on 42 from Int to Dyn. Also, the return type of f is Dyn, so the compiler inserts a cast to convert the returned value to Dyn to satisfy the type ascription.

In this paper we consider two approaches to the implementation of runtime casts: traditional casts, which we refer to as type-based casts, and coercions. Type-based casts provide the most straightforward implementation, but the proxies they generate can accumulate and consume an unbounded amount of space (Herman:2010aa). The coercions of Henglein:1994nz solve the space problem with a representation that enables the compression of higher-order casts (Herman:2010aa).

For type-based casts, the dynamic semantics that we use is almost covered in the literature. We use the lazy-D cast semantics which is described by Siek:2012uq. (They were originally described using coercions by Siek:2009rt.) The distinction between lazy-D and the more commonly used lazy-UD semantics (Wadler:2009qv) is not well-known, so to summarize the difference: in lazy-D, arbitrary types of values may be directly injected into type Dyn, whereas in lazy-UD, only values of a ground type may be directly injected into Dyn. For example, Int and Dyn→Dyn are ground types, but Int→Int is not.

For monotonic references with type-based casts, the dynamic semantics for lazy-D is given by Siek:2015aa.