What is Geometric Mean?

The geometric mean is defined mathematically as follows where n equals the number of values in the set, and x is a given number within the set:

Mathematical definition of the geometric mean

To calculate the geometric mean of this set, let’s first find the product of our set of numbers by multiplying them all together.

Next, let’s take the nth root of this product where n is equal to the number of items in our set . In this case, that means we’ll be taking the cubed root, or root of the 3rd degree:

The geometric mean is better suited than the arithmetic mean to find the central tendency, or average, in a set of values when the relationship across the given set of values is non-linear or exponential. The arithmetic mean will work well to find the central tendency in a given set when the relationship between values is linear, or additive.

To exhibit the effectiveness of geometric mean vs. arithmetic mean in finding the central tendency in a set of numbers when there is an exponential, or multiplicative, relationship between each item, let’s consider the following set. Note that each item in the set is 2 times the previous number in the set:

The arithmetic mean of the set is found by adding every number in the set together and dividing by the number of items in the set.

To find the geometric mean of this same set, multiply each number in the set together and take the nth root of that product, where n is the number of items in the set.

While the geometric mean tends to be better suited to find central tendency in a set of values with a multiplicative relationship, the harmonic mean is more effective when the set contains values that are ratios.

To exhibit the varying effectiveness of geometric mean vs. harmonic mean, consider calculating the average velocity of an object over a particular distance when the velocity varies.

The geometric mean of this set would be calculated as:

The harmonic mean of this set would be calculated as:

The harmonic mean calculated above shows an average velocity of 33.33 km/h. If the object traveled at that velocity for the same 6 hours, it would travel exactly 200km. This same distance our object traveled in this scenario at its varying velocities.

The geometric mean calculated above shows an average velocity of 44.7km/h. If the object traveled at that velocity for the same 6 hours, it would travel roughly 268km - a distance that is 68km further than our object actually traveled.

Therefore, in this scenario, the geometric mean yields an average velocity that is less meaningful than that yielded by the harmonic mean.

The geometric mean has many applications in many different fields including medicine, finance, computer science, and elsewhere.

In science and medicine, the geometric mean is used to understand statistical rates of growth. This growth can be human population growth or the growth of a bacteria or virus, or even of biological processes such as gene expression, a normal process which occurs in the cells of all living organisms. In such cases, the geometric mean, rather than the arithmetic mean, is relevant.

For an example of how the geometric mean is used in understanding growth rates, consider the following example of bacterial growth. You are a cancer researcher working in a lab and are trying to grow a batch of Chinese Hamster Ovary (CHO) cells in the lab to examine the effects of different anticancer compounds on these cells. You only have a few cells, and have to wait for them to multiply so you can do your different experiments.

This number makes sense because the doubling time of CHO cells is about 14-17 hours. In other words, the number of CHO cells increases by 252% on average each day compared to the previous day.

Knowing the average growth rate found using the geometric can be used to estimate how long cells should be grown in another experiment to achieve a desired total number of cells. For example, if you wanted to culture 10,000 cells from 100, you could apply the average growth rate from the example calculation above to estimate the number of days needed:

Using the geometric mean from the previous example calculation, it would take roughly 6 days to go from 100 cells to 10k cells.

CAGR is one of the most reliable ways to measure the returns for any investment that increases or decreases in value over time. Basically, the CAGR can tell you how much a stock would have grown in value each year, had it increased in value at a steady rate over time.

To calculate CAGR, simply calculating the geometric mean of the different yearly returns to obtain an average of growth over the years. As an example, let’s calculate the CAGR of a real stock -- Amazon (NASDAQ: $AMZN) -- over the past three years using the following share prices:

The CAGR for AMZN is simply the geometric mean of the annual growth rates and is calculated as follows: 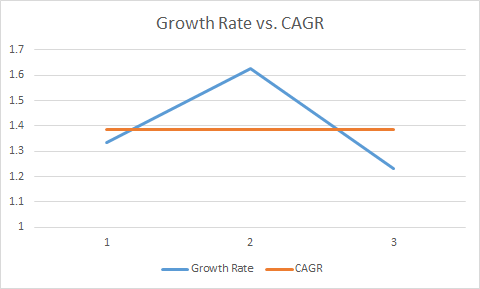 The geometric mean can be used to calculate percentages of pollutants in water in order to see if the water meets water quality standards. Because measurements can be variable for toxicants on different times and on different days, it’s useful to calculate the central tendency of these observations to obtain the most accurate estimate.

For example, let’s say five samples from a local lake were obtained, each with the following E. coli levels in terms of colony forming units per 100 ml (cfu/100 ml):

The variation amongst these values is relatively high, anywhere from 1 to 500 colony forming units (cfu) per 100 ml. Calculating the geometric mean of each of these samples to get an average value.

To find the geometric mean of this set, first calculate the product of all values in the set:

The MATC calculation is used to set standards for water quality, e.g., different levels of various chemicals which are allowed in infinitesimal levels in our water which are known to be safe levels. These levels are set in accordance with the United States Environmental Protection Agency rules and regulations as specified by the U.S. Clean Water Act.

Geometric means are useful when growth is proportional or varies nonlinearly, which can be true of systems in data science and machine learning.

The geometric mean was first invented by ancient Greek philosopher Pythagoras and his students at the Pythagorean School of Mathematics in Cortona, a coastal city in ancient Greece. In fact, Pythagoras invented all three means that exist today -- the arithmetic mean (what is typically known as the “mean) as well as the geometric mean and a third measure called the harmonic mean. Pythagoras, who sought to make sense of the world in terms of mathematics, also discovered several other mathematical concepts such as the Pythagorean theorem.