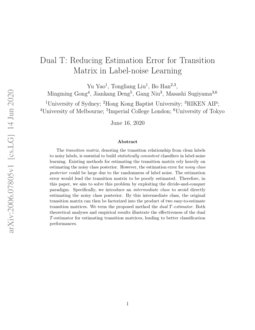 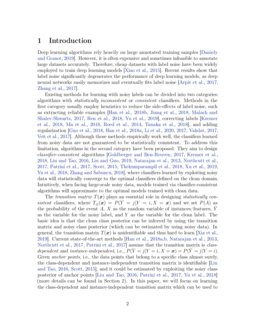 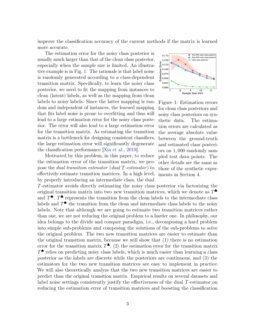 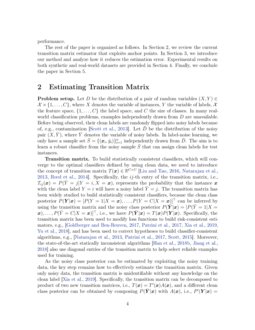 Existing methods for learning with noisy labels can be divided into two categories: algorithms with statistically inconsistent or consistent

classifiers. Methods in the first category usually employ heuristics to reduce the side-effects of label noise, such as extracting reliable examples

The transition matrix T(x) plays an essential role in designing statistically consistent classifiers, where Tij(x)=P(¯Y=j|Y=i,X=x) and we set P(A)

as the probability of the event

as the random variable of instances/features,

The rest of the paper is organized as follows. In Section 2, we review the current transition matrix estimator that exploits anchor points. In Section 3, we introduce our method and analyze how it reduces the estimation error. Experimental results on both synthetic and real-world datasets are provided in Section 4. Finally, we conclude the paper in Section 5.

Problem setup. Let D be the distribution of a pair of random variables (X,Y)∈X×{1,…,C}, where X denotes the variable of instances, Y the variable of labels, X the feature space, {1,…,C} the label space, and C the size of classes. In many real-world classification problems, examples independently drawn from D are unavailable. Before being observed, their clean labels are randomly flipped into noisy labels because of, e.g., contamination (Scott et al., 2013). Let ¯D be the distribution of the noisy pair (X,¯Y), where ¯Y denotes the variable of noisy labels. In label-noise learning, we only have a sample set ¯S={(xi,¯yi)}ni=1 independently drawn from ¯D. The aim is to learn a robust classifier from the noisy sample ¯S that can assign clean labels for test instances.

. Specifically, the transition matrix has been used to modify loss functions to build risk-consistent estimators, e.g.,

To avoid directly using the estimated noisy class posterior to approximate the transition matrix, we propose a new estimator in this section.

By introducing an intermediate class, the transition matrix T can be factorized in the following way:

By looking at Eq. (2), it seems we have changed an easy problem into a hard one. However, this is totally not true. Actually, we break down a problem into simple sub-problems. Combining the solutions to the sub-problems gives a solution to the original problem. Thus, in philosophy, our idea belongs to the divide and conquer paradigm. In the rest of this subsection, we will explain why it is easy to estimate the transition matrices T♠ and T♣. Moreover, in the next subsection, we will theoretically compare the estimation error of the dual T-estimator with that of the T-estimator.

It can be found that T♣ij=P(Y′=j|Y=i) has a similar form to Tij=P(¯Y=j|Y=i). We can employ the same method that is developed for T, i.e., the T-estimator, to estimate T♣. However, there seems to have two challenges: (1) it looks as if difficult to access P(Y′|x); (2) we may also have an error for estimating P(Y′|x). Fortunately, these two challenges can be well addressed by properly introducing the intermediate class. Specifically, we design the intermediate class Y′ in such a way that P(Y′|x)≜^P(¯Y|x), where ^P(¯Y|x) represents an estimated noisy class posterior. Note that ^P(¯Y|x) can be obtained by exploiting the noisy data at hand. As we have discussed, due to the randomness of label noise, estimating T directly will have a large estimation error especially when the noisy training sample size is limited. However, as we have access to P(Y′|x) directly, according to Eq. (1), the estimation error for T♣ is zero if anchor points are given111If the anchor points are to learn, the estimation error remains unchanged for the T-estimator and dual T-estimator by employing xi=argmaxx^P(¯Y=i|x)..

A sufficient condition for holding the above equalities is to let the intermediate class labels be identical to noisy labels. Note that it is hard to find an intermediate class whose labels are identical to noisy labels. The mismatch will be the main factor that contributes to the estimation error for T♠. Note also that since we have labels for the noisy class and intermediate class, P(¯Y=j|Y′=l) in Eq. (3) is easy to estimate by just counting the discrete labels, and it will have a small estimation error which converges to zero exponentially fast (Boucheron et al., 2013).

where 1{A} is an indicator function which equals one when A holds true and zero otherwise, (xi,¯yi) are examples from the training sample Str, and ∧ represents the AND operation.

In this subsection, we will justify that the estimation error could be greatly reduced if we estimate T♠ and T♣ rather than estimating T directly.

Assumption 1 is easy to hold. Theoretically, the error Δ2 involves no predefined hypothesis space, and the probability that Δ2 is larger than any positive number will converge to zero exponentially fast (Boucheron et al., 2013). Thus, Δ2 is usually much smaller than Δ1 and Δ3. We therefore focus on comparing Δ1 with Δ3 by ignoring Δ2. Intuitively, the error Δ3 is smaller than Δ1 because it is easy to obtain a small estimation error for fitting noisy class labels than that for estimating noisy class posteriors. We note that the noisy class posterior is in the continuous range of [0,1] while the noisy class labels are in the discrete set {1,…,C}. For example, suppose we have an instance (x,¯y)

, then, as long as the empirical posterior probability

^P(¯Y=¯y|x) is greater than 1/C, the noisy label will be accurately learned. However, the estimated error of the noisy class posterior probability can be up to 1−1/C. We also empirically verify the relation among these errors in Appendix 2.

We compare the estimation error between our estimator and the T

-estimator on both synthetic and real-world datasets with different sample size and different noise types. The synthetic dataset is created by sampling from 2 different 10-dimensional Gaussian distributions. One of the distribution has unit variance and zero mean among all dimension. Another one has unit variance and mean of two among all dimensions. The real-world image datasets used to evaluate transition matrices estimation error are MNIST

Neural network classifiers are used to estimate transition matrices. For fair comparison, the same network structure is used for both estimators. Specifically, on the synthetic dataset, a two-hidden-layer network is used, and the hidden unit size is 25; on the real-world datasets, we follow the network structures used by the state-of-the-art method (Patrini et al., 2017), i.e., using a LeNet network with dropout rate 0.5 for MNIST, a ResNet-18 network for F-MINIST and CIFAR10, a ResNet-34

network for CIFAR100, and a ResNet-50 pre-trained on ImageNet for Clothing1M. The network is trained for 100 epochs, and stochastic gradient descent (SGD) optimizer is used. The initial learning rate is

0.01, and it is decayed by a factor 10 after 50-th epoch. We use 20% training examples for validation, and the model with the best validation accuracy is selected for estimating transition matrix. The estimation error is calculated by measuring the ℓ1-distance between the estimated transition matrix and the ground truth T

. The average estimation error and the standard deviation over

5 repeated experiments for the both estimators is illustrated in Fig. 2 and 3.

We investigate how the estimation of the T-estimator and the dual T-estimator will affect the classification accuracy in label-noise learning. The experiments are conducted on MNIST, F-MINIST, CIFAR10, CIFAR100, and Clothing1M. The classification accuracy are reported in Table 1 and Table 2. Eight popular baselines are selected for comparison, i.e., Coteaching (Han et al., 2018b), and MentorNet (Jiang et al., 2018) which use diagonal entries of the transition matrix to help selecting reliable examples used for training; Forward (Patrini et al., 2017), and Revision (Xia et al., 2019), which use the transition matrix to correct hypotheses; Reweighting (Liu and Tao, 2016), which uses the transition matrix to build risk-consistent algorithms. There are three baselines without requiring any knowledge of the transition matrix, i.e., CE, which trains a network on the noisy sample directly by using cross entropy loss; Decoupling (Malach and Shalev-Shwartz, 2017), which trains two networks and updates the parameters only using the examples which fhave different prediction from two classifiers; Mixup (Zhang et al., 2018)

which reduces the memorization of corrupt labels by using linear interpolation to feature-target pairs. The estimation of the

The settings of our experiments may be different from the original paper, thus the reported accuracy can be different. For instance, in the original paper of Coteaching (Han et al., 2018b), the noise rate is given, and all data are used for training. In contrast, we assume the noise rate is unknown and needed to be estimated. We only use 80% data for training, since 20% data are leaved out as the validation set for transition matrix estimation. In the original paper of T-revision (Xia et al., 2019), the experiments on Clothing1M use clean data for validation. In contrast, we only use noisy data for validation.

According to Eq. (1) in the main paper, the estimation error for the T-estimator is

The estimation error for the i,j-the entry of the dual T-estimator is

where the second equation holds because the transition matrices are independent of instances. Hence, the estimation error of T♠ is

Appendix B Empirical Validation of Assumption 1

Figure 4 shows that the error Δ2 is very small and can be ignored. Δ3 is continuously smaller than Δ1 when the sample size is small. The recent work Daniely and Granot [2019] shows that the sample complex of the network is linear in the number of parameters, which means that, usually, we may not have enough training examples to learn the noisy class posterior well (e.g., CIFAR10, CIFAR100, and Fashion-MNIST), and Assumption 1 can be easily satisfied. It is also worth to mention that, even Assumption 1 does not hold, the estimation error of the dual T-estimator may also be smaller than the T-estimator. Specifically, the error ϵDT of the proposed estimator is upper bounded by C2(Δ2+Δ3). Generally, the increasing of the upper bound C2(Δ2+Δ3) does not imply the increasing of the error ϵDT.