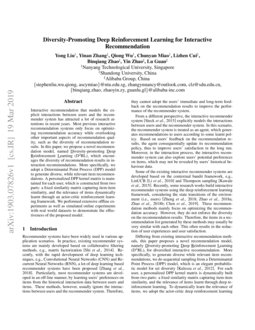 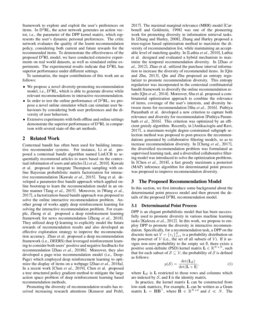 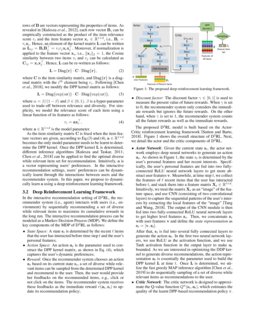 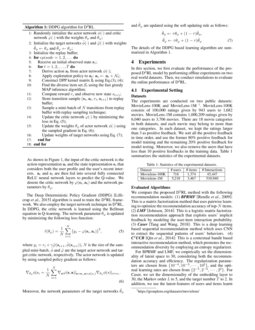 D2RLIR : an improved and diversified ranking function in interactive recommendation systems based on deep reinforcement learning

Recommendation is crucial in both academia and industry, and various tec...
Feng Liu, et al. ∙

Some of the existing interactive recommender systems are developed based on the contextual bandit framework, e.g., LinUCB [Li et al.2010]

Differing from existing interactive recommendation methods, this paper proposes a novel recommendation model, namely Diversity-promoting Deep Reinforcement Learning (D2RL), for diversified interactive recommendation. More specifically, to generate diverse while relevant item recommendations, we do sequential sampling from a Determinantal Point Process (DPP) model, which is an elegant probabilistic model for set diversity [Kulesza et al.2012]. For each user, a personalized DPP kernel matrix is dynamically built from two parts: a fixed similarity matrix capturing item-item similarity, and the relevance of items learnt through deep reinforcement learning. To dynamically learn the relevance of items, we adopt the actor-critic deep reinforcement learning framework to explore and exploit the user’s preferences on items. In D2

RL, the actor network generates an action vector, i.e., the parameter of the DPP kernel matrix, which represents the user’s dynamic personal preferences. The critic network evaluates the quality of the learnt recommendation policy, considering both current and future rewards for the recommended items. To demonstrate the effectiveness of the proposed D

2RL model, we have conducted extensive experiments on real world datasets, as well as simulated online experiments. The experimental results indicate that D2RL has superior performance under different settings.

To summarize, the major contributions of this work are as follows:

. Moreover, Sha et al. proposed a combinatorial optimization approach to combine the relevance of items, coverage of the user’s interests, and diversity between items for recommendation

[Sha et al.2016]. Puthiya Parambath et al. developed a new criterion to capture both relevance and diversity for recommendation [Puthiya Parambath et al.2016]. This criterion was optimized by an efficient greedy algorithm. Recently, in [Antikacioglu and Ravi2017], a maximum-weight degree-constrained subgraph selection method was proposed to post-process the recommendations generated by collaborative filtering models, so as to increase recommendation diversity. In [Cheng et al.2017]

, the diversified recommendation problem was formulated as supervised learning task, and a diversified collaborative filtering model was introduced to solve the optimization problems. In

In this section, we first introduce some background about the determinantal point process model and then present the details of the proposed D2RL recommendation model.

[Kulesza et al.2012]. In this work, we propose to employ DPP to promote the diversity in interactive recommendation. Specifically, for a recommendation task, a DPP on the discrete item set V={vj}Nj=1

is a probability distribution on the powerset of

V (i.e., the set of all subsets of V). If it assigns non-zero probability to the empty set ∅, there exists a positive semi-definite (PSD) kernel matrix L∈RN×N, such that for each subset of S⊆V, the probability of S is defined as follows:

where LS is L restricted to those rows and columns which are indexed by S, and I

In practice, the kernel matrix L can be constructed from low-rank matrices. For example, L can be written as a Gram matrix L=BB⊤, where B∈RN×d and d≪N. The rows of B are vectors representing the properties of items. As revealed in [Kulesza et al.2012], each row vector Bi can be empirically constructed as the product of the item relevance score ri and the item feature vector xi∈R1×d, i.e., Bi=rixi. Hence, an element of the kernel matrix L can be written as Lij=BiB⊤j=rirjxix⊤j. Moreover, if normalization is applied to the feature vector xi, i.e., ∥xi∥2=1

, the Cosine similarity between two items

vi and vj can be calculated as Cij=xix⊤j. Hence, L can be re-written as follows:

where C is the item similarity matrix, and Diag{r} is a diagonal matrix with the ith element being ri. Following [Chen et al.2018], we modify the DPP kernel matrix as follows:

where α=β/(1−β) and β∈(0,1). β is a hyper-parameter used to trade-off between relevance and diversity. For simplicity, we model the relevance score of each item using a linear function of its features as follows:

where a∈R1×d is the model parameter.

As the item similarity matrix C is fixed when the item feature vectors are given, according to Eq.(3) and (4), a∈R1×d becomes the only model parameter needs to be learnt to determine the DPP kernel. Once the DPP kernel L is determined, different inference algorithms [Kulesza and Taskar2011, Chen et al.2018] can be applied to find the optimal diverse while relevant item set for recommendation. Intuitively, a is a vector representing users’ preferences. In the interactive recommendation settings, users’ preferences can be dynamically learnt through the interactions between users and the recommender system. In this paper, we propose to dynamically learn a using a deep reinforcement learning framework.

In the interactive recommendation setting of D2

RL, the recommender system (i.e., agent) interacts with users (i.e., environment) by sequentially recommending a set of diverse while relevant items to maximize its cumulative rewards in the long run. The interactive recommendation process can be modeled as a Markov Decision Process (MDP). We define the key components of the MDP of D

The proposed D2RL model is built based on the Actor-Critic reinforcement learning framework [Sutton and Barto2018]. Figure 1 shows the overall structure of D2RL. Next, we detail the actor and the critic components of D2RL.

The Deep Deterministic Policy Gradient (DDPG) [Lillicrap et al.2015] algorithm is used to train the D2RL framework. We also employ the target network technique in D2RL. In DDPG, the critic network is learned using the Bellman equation in Q-learning. The network parameter θφ

is updated by minimizing the following loss function:

where yi=ri+γ~φ(si+1,~ϕ(si+1)), N is the size of the sampled mini-batch, ~ϕ and ~φ are the target actor network and target critic network, respectively. The actor network is updated by using sampled policy gradient as follows:

Moreover, the network parameters of the target networks ~θϕ and ~θφ are updated using the soft updating rule as follows:

The details of the DDPG based learning algorithm are summarized in Algorithm 1.

For BPRMF and LMF, we empirically set the dimensionality of latent space to 30, considering both the recommendation accuracy and efficiency. The regularization parameters are chosen from {10−4,10−3,⋯,102}, and the optimal learning rates are chosen from {2−5,2−4,⋯,22}. For Caser, we set the dimensionality of the embedding layer to 30, the Markov order L to 5, and the target number T to 2. In addition, we use the latent features of users and items learnt by BPRMF as the user and item features in the interactive recommendation methods, i.e., C2UCB and D2RL. In C2UCB, the regularization parameter λ of the entropy regularizer is selected from {0.01,0.1,0.5,1.0,10.0}. For D2RL, we set the number of recent items ℓ in each state to 5. The parameter β that balances relevance and diversity in the DPP kernel matrix is chosen from {0.1,0.2,⋯,0.9}. We utilize Adam to optimize the actor and critic networks, and set the learning rate to 0.001. In addition, we set the discount factor γ of D2RL to 0.95.

where St is the set of items recommended to the user at epoch t, |⋅| is the cardinality of a set, and Vtest denotes the set of items the user has interacted with in the testing data. The diversity of the recommendation results at epoch t is measured by the intra-list distance (ILD) [Zhang and Hurley2008] metric, which is defined as follows:

We adopt two different settings to evaluate the recommendation algorithms: offline evaluation on public datasets and online evaluation with a simulator.

For online evaluation, we build a simulator to compare D2RL with C2UCB. The online interactive recommendation process of D2RL follows Algorithm 1 and the feedback on recommended items is generated by a simulator as summarized in Algorithm 3. In this simulator, we first use the pre-trained LMF [Johnson2014] model on training data to predict user preference on the recommended items. Then, we use MMR [Carbonell and Goldstein1998] to simulate the user’s feedback probability by considering both the user preference and the diversity of recommended items. The MMR parameter δ simulates a person’s personal consideration between relevance and diversity, and a higher δ simulates a person who prefers more relevant and less diverse recommendations. The parameter ρ is a decision threshold, and positive feedback will be provided if the user’s feedback probability is greater than ρ. We empirically set the MMR parameter δ for each user randomly in the range (0,1) and the threshold ρ to 0.5. A good interactive recommender system should be able to learn from the simulated user behaviours and make accurate while diverse recommendations. For online evaluation, the accuracy is evaluated by comparing the recommended results with simulated feedbacks.

However, the performance of D2RL is not as superior on Movielens-100K dataset. As shown in Figure 2(a), D2RL sometimes achieves poorer recommendation accuracy at certain recommendation epoches comparing with other baselines. One potential reason is that the critic network is not able to accurately estimate the quality of the learned recommendation policy. From Figure 2(b), we can note that D2RL achieves comparable performance with the baselines in terms of recommendation diversity. In the offline setting, the user’s feedback on the recommendation results is fixed, which limits the effectiveness of interactive recommender systems in capturing users’ dynamic preferences on items. To remedy this problem, we conduct simulations of online experiments to study the effectiveness of D2RL, based on Movielens-100K and Movielens-1M datasets.

Superior performance of D2RL can also be observed on Movielens-1M dataset. As shown in Figure 5(a), both D2RL and C2UCB achieve stable performance on recommendation accuracy, and D2RL significantly outperforms C2UCB consistently at all recommendation epochs. Moreover, Figure 5(b) shows that the recommendation diversity of D2RL fluctuates at first and then becomes steady quickly, which is significantly higher than that of C2UCB. On average, D2RL outperforms C2UCB by 76.04% and 156.58% in terms of Precision and Diversity, over all recommendation epoches in the simulation experiments on Movielens-1M dataset.

In this paper, we have proposed a novel interactive recommendation model, namely Diversity-promoting Deep Reinforcement Learning (D2RL). Specifically, D2RL uses actor-critic reinforcement learning framework to model the interactions between users and the recommender system. Moreover, the determinantal point process (DPP) model has been incorporated in the recommendation process to promote the diversity of recommendation results. Both empirical experiments on real world datasets and simulated online experiments have been performed to demonstrate the effectiveness of D2RL. The future work will focus on the following directions. Firstly, we would like to directly learn the DPP kernel matrix from the data. Secondly, we are also interested in developing more efficient DPP inference algorithms for generating relevant yet diverse recommendations.