In this paper, we propose a new convolutional layer called Depthwise-STFT Separable layer that can serve as an alternative to the standard depthwise separable convolutional layer. The construction of the proposed layer is inspired by the fact that the Fourier coefficients can accurately represent important features such as edges in an image. It utilizes the Fourier coefficients computed (channelwise) in the 2D local neighborhood (e.g., 3x3) of each position of the input map to obtain the feature maps. The Fourier coefficients are computed using 2D Short Term Fourier Transform (STFT) at multiple fixed low frequency points in the 2D local neighborhood at each position. These feature maps at different frequency points are then linearly combined using trainable pointwise (1x1) convolutions. We show that the proposed layer outperforms the standard depthwise separable layer-based models on the CIFAR-10 and CIFAR-100 image classification datasets with reduced space-time complexity. 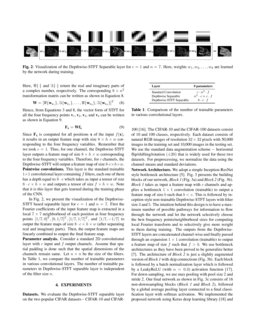 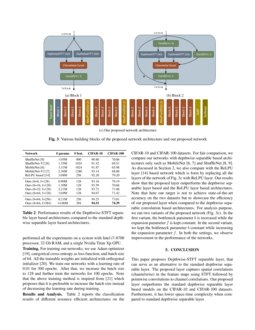 Over the past few years, with the availability of large-scale datasets and computational power, deep learning has achieved impressive results on a wide range of applications in the field of computer vision. In general, the trend is to achieve higher performance by developing deep and complex models using large computational resources

[1, 2, 3, 4, 5]. However, this progress is not necessarily making the networks more efficient with respect to memory and speed. In many real world and resource constraint applications such as robotics, satellites, and self-driving cars, the recognition tasks need to be carried out in a fast and computationally efficient manner. Therefore, there is a need to develop space-time efficient models for such applications.

Recently, there has been a growing interest into developing space-time efficient neural networks for real time and resource restricted applications [10, 6, 7, 9, 8, 11, 12].

Depthwise Separable Convolutions. As discussed in Section 1, depthwise separable convolutions significantly reduce the space-time complexity of convolutional neural networks (CNNs) when compared to the standard convolutions by partitioning the steps of learning spatial and channel correlations. Recently, many depthwise separable convolutions based networks have been introduced such as MobileNet [6, 7], ShuffleNet [8, 9], and Xception [13]. Note that with the reduced complexity in the network architectures, these networks achieve trade-off between accuracy and space-time complexity.

f(x)∈Rc×h×w where h, w, and c are the height, width, and number of channels of the feature map, respectively. Fig. 1 presents the high-level architecture of our Depthwise-STFT based separable layer. Note that similar to the standard depthwise separable convolution layer, the Depthwise-STFT based separable layer has two sub-layers. In the first layer (named Depthwise-STFT), for each channel in the input feature map, we compute the Fourier coefficients in a 2D local neighborhood at each position of the channel to obtain the new feature maps. The Fourier coefficients are computed using 2D Short Term Fourier Transform (STFT) at multiple fixed low frequency points in the 2D local neighborhood at each position of the channel. The second layer (named pointwise convolutions) uses 1×1 convolutions to learn linear combinations of the feature maps obtained from the Depthwise-STFT layer. The detailed description of each layer is as follows.

Depthwise-STFT. This layer takes a feature map f(x)∈Rc×h×w as input from the previous layer. For simplicity, let us take c=1. Hence, we can drop the channel dimension and rewrite the size of f(x) as h×w. Here, x∈Z2 are the 2D coordinates of the elements in f(x).

Next, each x in f(x) has a n×n 2D neighborhood (denoted by Nx) which can be defined as shown in Equation 1.

to derive the local frequency domain representation. For this, we use Short Term Fourier Transform (STFT) which is defined in Equation

. Note that, due to the separability of the basis functions, 2D STFT can be efficiently computed using simple 1D convolutions for the rows and the columns, successively. Using vector notation, we can rewrite Equation

) of a linear transformation and is defined as shown in Equation

fx is a vector containing all the elements from the neighborhood Nx and is defined as shown in Equation 5.

At each position x, after separating the real and the imaginary parts of each component, we obtain a vector as shown in Equation 7.

Here, R{⋅} and I{⋅} return the real and imaginary parts of a complex number, respectively. The corresponding 8×n2 transformation matrix can be written as shown in Equation 8.

Hence, from Equations 3 and 8, the vector form of STFT for all the four frequency points v1,v2,v3, and v4 can be written as shown in Equation 9.

Pointwise convolutions. This layer is the standard trainable 1×1 convolutional layer containing f filters, each one of them has a depth equal to 8⋅c which takes as input a tensor of size 8⋅c×h×w and outputs a tensor of size f×h×w. Note that it is this layer that gets learned during the training phase of the CNN.

In Fig. 2, we present the visualization of the Depthwise-STFT based separable layer for c=1 and n=7. First the Fourier coefficients of the input feature map is extracted in a local 7×7 neighborhood of each position at four frequency points [1/7,0]T,[0,1/7]T,[1/7,1/7]T, and [1/7,−1/7] to output the feature maps of size 8⋅c×h×w (after separating real and imaginary parts). Then, the output feature maps are linearly combined to output the final feature map.

output channels. Assume that spatial padding is done such that the spatial dimensions of the channels remain same. Let

Datasets. We evaluate the Depthwise-STFT separable layer on the two popular CIFAR datasets− CIFAR-10 and CIFAR-100 [16]. The CIFAR-10 and the CIFAR-100 datasets consist of 10 and 100 classes, respectively. Each dataset consists of natural RGB images of resolution 32×32 pixels with 50,000 images in the training set and 10,000 images in the testing set. We use the standard data augmentation scheme − horizontal flip/shifting/rotation (±20)

that is widely used for these two datasets. For preprocessing, we normalize the data using the channel means and standard deviations.

Network Architecture. We adopt a simple Inception-ResNet style bottleneck architecture [5]. Fig. 3 presents the building blocks of our network, Block 1 (Fig. 2(a)) and Block 2 (Fig. 2(b)). Block 1 takes as input a feature map with c channels and applies a bottleneck 1×1 convolution (trainable) to output a feature map of size b such that b<c. This is followed by inception style non-trainable Depthwise-STFT layers with filter size 3 and 5. The intuition behind this design is to have a maximum number of possible pathways for information to flow through the network and let the network selectively choose the best frequency points/neighborhood sizes for computing local Fourier transform and to selectively give more weight to them during training. The outputs from the Depthwise-STFT layers are concatenated channel-wise and finally passed through an expansion 1×1 convolution (trainable) to output a feature map of size f such that f>b. We use bottleneck architectures as they have been proved to be generalize better [7]. The architecture of Block 2 is just a slightly augmented version of Block 1 with skip connections (Fig. 2(b)

. For down-sampling, we use max pooling with pool size 2 and stride 2. Our final network as shown in Fig.

[18] and performed all the experiments on a system with Intel i7-8700 processor, 32 Gb RAM, and a single Nvidia Titan Xp GPU.

Training. For training out networks, we use Adam optimizer [19]

, categorical cross-entropy as loss function, and batch size of 64. All the trainable weights are initialized with orthogonal initializer

. We train our networks with a learning rate of 0.01 for 300 epochs. After that, we increase the batch size to 128 and further train the networks for 100 epochs. Note that the above training method is inspired from

[21] which proposes that it is preferable to increase the batch size instead of decreasing the learning rate during training.

Results and Analysis. Table 2 reports the classification results of different resource efficient architectures on the CIFAR-10 and CIFAR-100 datasets. For fair comparison, we compare our networks with depthwise separable based architectures only such as MobileNet [6, 7] and ShuffleNet [8, 9]. As discussed in Section 2, we also compare with the ReLPU layer [14] based network which is form by replacing all the layers of the network of Fig. 2(c) with ReLPU layer. Our results show that the proposed layer outperforms the depthwise separable layer based and the ReLPU layer based architectures. Note that here our target is not to achieve state-of-the-art accuracy on the two datasets but to showcase the efficiency of our proposed layer when compared to the depthwise separable convolution based architectures. For analysis purpose, we ran two variants of the proposed network (Fig. 2(c)). In the first variant, the bottleneck parameter b is increased while the expansion parameter f is kept constant. In the second variant, we kept the bottleneck parameter b constant while increasing the expansion parameter f. In both the settings, we observe improvement in the performance of the networks.