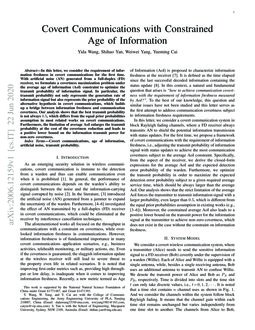 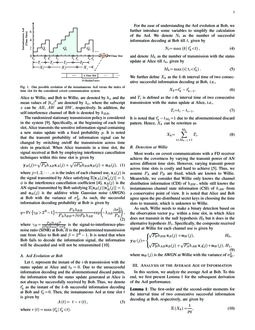 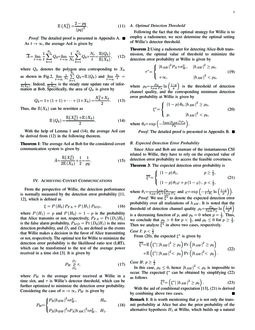 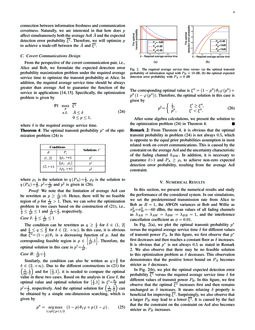 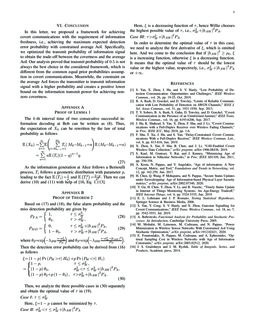 In this paper, we investigate the optimal design of a wireless-powered c...
Yida Wang, et al. ∙

As an emerging security solution in wireless communications, covert communication is immune to the detection from a warden and thus can enable communication even when it is prohibited [1]. In general, the performance of covert communications depends on the warden’s ability to distinguish between the noise and the information-carrying signal corrupted by noise [2]. In the literature, [3] introduced the artificial noise (AN) generated from a jammer to expand the uncertainty of the warden. Furthermore, [4, 5, 6] investigated the effect of AN transmitted by a full-duplex (FD) receiver in covert communications, which could be eliminated at the receiver by interference cancellation techniques.

We consider a covert wireless communication system, where a transmitter (Alice) needs to send the sensitive information signal to a FD receiver (Bob) covertly under the supervision of a warden (Willie). Each of Alice and Willie is equipped with a single antenna, while, besides a single receiving antenna, Bob uses an additional antenna to transmit AN to confuse Willie. We denote the transmit power of Alice and Bob as PA and PB, respectively. Time is divided into slots and the time slot t can only take discrete values, i.e., t=0,1,2,⋯. It is noted that a time slot contains n channel uses as shown in Fig. 1. And we consider the channels within the system follow block Rayleigh fading. It means that the channel gain within each time slot remains unchanged but varies independently from one time slot to another. The channels from Alice to Bob, Alice to Willie, and Bob to Willie, are denoted by hx and the mean values of |hx|2 are denoted by λx, where the subscript x can be AB, AW and BW, respectively. In addition, the self-interference channel of Bob is denoted by hBB.

The randomized stationary transmission policy is considered in the system [9]. Specifically, at the beginning of each time slot, Alice transmits the sensitive information signal containing a new status update with a fixed probability p. It is noted that the transmit probability of information signal can be changed by switching on/off the transmission across time slots in practical. When Alice transmits in a time slot, the signal received at Bob by employing interference cancellation techniques within this time slot is given by

σ2B. As such, the successful information decoding probability at Bob is given by

where γB=PA|hAB|2ϕPB|hBB|2+σ2B is the signal-to-interference-plus-noise ratio (SINR) at Bob, R is the predetermined transmission rate from Alice to Bob and β=2R−1. It is noted that when Bob fails to decode the information signal, the information will be discarded and will not be retransmitted [10].

For the ease of understanding the AoI evolution at Bob, we further introduce some variables to simplify the calculation of the AoI. We denote Nt as the number of successful information decoding at Bob till t, given by

and denote Mk as the number of transmission with the status update at Alice till tk, given by

and Ti is defined as the i-th interval time of two consecutive transmission with the status update at Alice, i.e.,

It is noted that t′k−tMk=1 due to the aforementioned discard pattern. Hence, Xk can be rewritten as

Most works on covert communications with a FD receiver achieve the covertness by varying the transmit power of AN across different time slots. However, varying transmit power across time slots is costly and hard to achieve [5]. Thus, we assume PA and PB are fixed, which are known to Willie. Meanwhile, we consider that Willie only knows the channel distribution information (CDI) of hBW, while still knows the instantaneous channel state information (CSI) of hAW from a conservative point of view. It is noted that Alice and Bob agree upon the pre-distributed secret keys in choosing the time slots to transmit, which is unknown to Willie.

As such, Willie needs to make a binary detection based on the observation vector

within a time slot, in which Alice does not transmit in the null hypothesis

H0 but it does in the alternative hypothesis H1. Specifically, the composite received signal at Willie for each channel use is given by

where nW(j) is the AWGN at Willie with the variance of σ2W.

Iii Analysis of the Average Age of Information

In this section, we analyze the average AoI at Bob. To this end, we first present Lemma 1 for the subsequent derivation of the AoI performance.

: The first-order and the second-order moments for the interval time of two consecutive successful information decoding at Bob, respectively, are given by

The detailed proof is presented in Appendix A.

As t→∞, the average AoI is given by

where Qk denotes the polygon area corresponding to Xk as shown in Fig.2, limt→∞1NtNt∑k=1Qk=E(Qk) and limt→∞Ntt=1E(Xk). Indeed, 1E(Xk) is the steady state update rate of information at Bob. Specifically, the area of Qk is given by

Thus, the E(Xk) can be rewritten as

With the help of Lemma 1 and (14), the average AoI can be derived from (12) in the following theorem.

Theorem 1: The average AoI at Bob for the considered covert communication system is given by

From the perspective of Willie, the detection performance is normally measured by the detection error probability [11, 12], which is defined as

where P(H1)=p and P(H0)=1−p is the probability that Alice transmits or not, respectively, PFA=Pr(D1|H0) is the false alarm probability, PMD=Pr(D0|H1) is the miss detection probability, and D1 and D0 are defined as the events that Willie makes a decision in the favor of Alice transmitting or not, respectively. The optimal test for Willie to minimize the detection error probability is the likelihood ratio test (LRT), which can be transformed to the test of the average power received in a time slot [3]. It is given by

where PW is the average power received at Willie in a time slot, and τ is Willie’s detector threshold, which can be further optimized to minimize the detection error probability. Considering the case of n→∞, PW is given by

Following the fact that the optimal strategy for Willie is to employ a radiometer, we next determine the optimal setting of Willie’s detector threshold.

Theorem 2:Using a radiometer for detecting Alice-Bob transmission, the optimal value of threshold to minimize the detection error probability at Willie is given by

where ρ0=PBλBWPAln(1−pp) is the threshold of detection channel quality, and the corresponding minimum detection error probability at Willie is given by

The detailed proof is presented in Appendix B.

Since Alice and Bob are unaware of the instantaneous CSI related to Willie, they have to rely on the expected value of detection error probability to access the feasible covertness.

We use ¯¯¯¯¯ξ∗ to denote the expected detection error probability over all realizations of hAW. It is noted that the threshold of detection channel quality ρ0=PBλBWPAln(1−pp) is a decreasing function of p, and ρ0=0 when p=12. Thus, we conclude that ρ0>0 for p<12, and ρ0≤0 for p≥12. Then we analyze ¯¯¯¯¯ξ∗ in above two cases, respectively.

In this case, ρ0≤0, hence |hAW|2<ρ0 is impossible to occur. The expected ξ∗ can be obtained by simplifying (22) as follows

With the aid of conditional expectation [13], (21) is derived by combining above two cases.

Remark 1: It is worth mentioning that p is not only the transmit probability at Alice but also the prior probability of the alternative hypothesis H1 at Willie, which builds up a natural connection between information freshness and communication covertness. Naturally, we are interested in that how does p affect simultaneously both the average AoI ¯A and the expected detection error probability ¯¯¯¯¯ξ∗. Therefore, we will optimize p to achieve a trade-off between the ¯A and ¯¯¯¯¯ξ∗.

From the perspective of the covert communication pair, i.e., Alice and Bob, we formulate the expected detection error probability maximization problem under the required average service time to optimize the transmit probability at Alice. In addition, the required average service time should be always greater than average AoI to guarantee the function of the service in applications [14, 15]. Specifically, the optimization problem is given by

where δ is the required average service time.

Theorem 4: The optimal transmit probability p∗ of the optimization problem (24) is

We note that the limitation of average AoI can be rewritten as p≥1qδ>0. Hence, there will be no feasible region of p for 1qδ>1. Then, we can solve the optimization problem in two cases based on the construction of (21), i.e., 12≤1qδ≤1 and 1qδ<12, respectively.

After some algebra calculations, we present the solution to the optimization problem (24) in Theorem 4.

Remark 2: From Theorem 4, it is obvious that the optimal transmit probability in problem (24) is not always 0.5, which is opposite to the equal prior probabilities assumption in most related work on covert communications. This is caused by the constraint on the average AoI and the uncertainty characteristic of the fading channel hBW. In addition, it is necessary to guarantee δ>1 and PA≥ρ1 to achieve non-zero expected detection error probability, resulting from the average AoI constraint.

In this section, we present the numerical results and study the performance of the considered system. In our simulations, we set the predetermined transmission rate from Alice to Bob as R=1, the AWGN variances at Bob and Willie as σ2B=σ2W=−60 dBm, the mean values of all fading channels as λAB=λAW=λBW=λBB=1, and the interference cancellation coefficient as ϕ=0.01.

In Fig. 2, we plot the optimal transmit probability p∗ versus the required average service time δ for different values of transmit power PA. In this figure, we first observe that p∗ first decreases and then reaches a constant floor as δ increases. It is obvious that p∗ is not always 0.5 as stated in Remark 2. We also observe that there may be no feasible solution to this optimization problem as δ decreases. This observation demonstrates that the positive lower bound on PA becomes stricter as δ decreases.

In Fig. 2, we plot the optimal expected detection error probability ¯¯¯¯¯ξ∗ versus the required average service time δ for different values of transmit power PB. In this figure, we first observe that the optimal ¯¯¯¯¯ξ∗ increases first and then remains unchanged as δ increases. It means relaxing δ properly is beneficial for improving ¯¯¯¯¯ξ∗. Surprisingly, we also observe that a larger PB may lead to a lower ¯¯¯¯¯ξ∗. It is caused by the fact that the the constraint on the constraint on AoI also becomes stricter as PB increases.

The k-th interval time of two consecutive successful information decoding at Bob can be written as (8). Thus, the expectation of Xk

can be rewritten by the law of total probability as follows

As the information generation at Alice follows a Bernoulli process, Ti

follows a geometric distribution with parameter

Appendix B Proof of Theorem 2

Then, we analyze the three possible cases in (30) separately and obtain the optimal value of τ in (19).