Convolutional neural networks (CNNs) have had great success in many real-world applications and have also been used to model visual processing in the brain. However, these networks are quite brittle - small changes in the input image can dramatically change a network's output prediction. In contrast to what is known from biology, these networks largely rely on feedforward connections, ignoring the influence of recurrent connections. They also focus on supervised rather than unsupervised learning. To address these issues, we combine traditional supervised learning via backpropagation with a specialized unsupervised learning rule to learn lateral connections between neurons within a convolutional neural network. These connections have been shown to optimally integrate information from the surround, generating extra-classical receptive fields for the neurons in our new proposed model (CNNEx). Models with optimal lateral connections are more robust to noise and achieve better performance on noisy versions of the MNIST and CIFAR-10 datasets. Resistance to noise can be further improved by combining our model with additional regularization techniques such as dropout and weight decay. Although the image statistics of MNIST and CIFAR-10 differ greatly, the same unsupervised learning rule generalized to both datasets. Our results demonstrate the potential usefulness of combining supervised and unsupervised learning techniques and suggest that the integration of lateral connections into convolutional neural networks is an important area of future research. 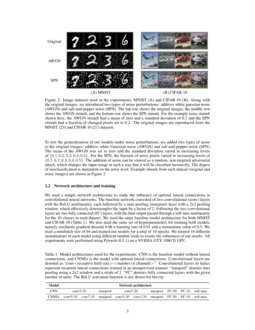 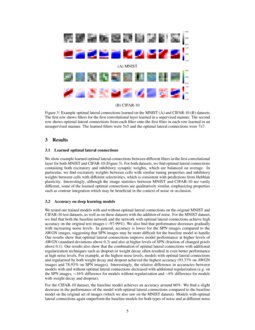 The visual response of a neuron is traditionally characterized by its classical receptive field (RF). However, such a picture of response tuning is incomplete as neurons can also integrate contextual information from other sources such as their surround. Contextual modulation refers to the ability of visual stimuli far outside the classical RF of a neuron to modulate the activity of the neuron. Examples of contextual modulation include surround suppression Bair_etal03 ; Jones_etal01 , contour integration Hess_etal03 ; Li_etal06 , and figure-ground segmentation Zhou_etal00 ; Lamme_etal95 . These phenomena cannot be simply explained by feedforward mechanisms, but instead suggest an influence from extra-classical RFs. Contextual modulation is thought to be mediated in part by lateral connections between neurons in the same visual area Angelucci_Bressloff06 . Experimental and computational modeling studies suggest that both excitatory and inhibitory cell types play an important role in this process Ko_etal11 ; Jiang_etal15 ; Lee_etal16 .

The field of deep learning has traditionally focused on feedforward models of visual processing, and these models have been used to describe neural activity in the ventral stream of humans and other primates

Cadieu_etal14 ; Gucclu_vanGerven15 ; Yamins_Dicarlo16 ; Wang_Cottrell17 . Deep learning is a form of supervised learning that relies on backpropagation of a global error signal, but whether the brain actually uses backpropagation is controversial given the requirement for large amounts of labeled data and non-local updates to synaptic weights (for recent reviews on the connection between deep learning and neuroscience, see Marblestone_etal16 ; Kietzmann_etal17 ). While convolutional neural networks have resulted in many practical successes Gu_etal17 , they can be highly susceptible to adversarial examples. In one extreme case, the change of a single pixel within the input image can with high confidence change the output prediction of the network Su_etal17 . In contrast, visual processing in the brain makes use of recurrent connections, including top-down and lateral connections, which may provide some level of immunity to these adversarial attacks (for recent results on human adversarial examples, see Elsayed_etal18 ). More recently, convolutional neural networks that include recurrent connections have also been proposed Spoerer_etal17 .

However, most of these models still largely rely on supervised learning. The brain is able to build rich internal representations of information with little to no labeled data, which is a form of unsupervised learning. Recent work proposed Bayes optimal context integration as a canonical cortical computation, showing that optimal lateral connections can be learned using a modified Hebbian learning rule Iyer_Mihalas17

MNIST and CIFAR-10 CIFAR . When applying different noise perturbations to the input images, the optimal lateral connections improve the overall performance and robustness of these networks. Our results suggest that incorporating lateral connections within convolutional neural networks is an important area of future research.

To test the generalization of our models under noise perturbations, we added two types of noise to the original images: additive white Gaussian noise (AWGN) and salt-and-pepper noise (SPN). The mean of the AWGN was set to zero and the standard deviation varied in increasing levels of {0.1,0.2,0.3,0.4,0.5}. For the SPN, the fraction of noisy pixels varied in increasing levels of {0.1,0.2,0.3,0.4,0.5}

. The addition of noise can be viewed as a random, non-targeted adversarial attack, which changes the input image in such a way that it will be classified incorrectly. The degree of misclassification is dependent on the noise level. Example stimuli from each dataset (original and noisy images) are shown in Figure

We used a simple network architecture to study the influence of optimal lateral connections in convolutional neural networks. The baseline network consisted of two convolutional (conv) layers with the ReLU nonlinearity, each followed by a max-pooling (maxpool) layer with a 2x2 pooling window, which effectively downsamples the input by a factor of 2. Following the two convolutional layers are two fully connected (FC) layers, with the final output passed through a soft-max nonlinearity for the 10 classes in each dataset. We used the same baseline model architecture for both MNIST and CIFAR-10 (Table

). We also used the same set of hyperparameters for training both models, namely stochastic gradient descent with a learning rate of 0.01 and a momentum value of 0.5. We used a minibatch size of 64 and trained our models for a total of 10 epochs. We trained 10 different instantiations of each model using different random seeds to ensure the robustness of our results. All experiments were performed using Pytorch (0.3.1) on a NVIDIA GTX 1080 Ti GPU.

After the initial phase of supervised learning, we freeze the feedforward synaptic weights of the network. The classical receptive field response of a neuron representing feature j in layer l at image location m, given image x can be represented by the activation of a standard artificial neuron model:

The synaptic weights are learned in an unsupervised manner using the following rule:

where Wmnjk is the synaptic weight between each pair (j,k) of features located at (m,n) and x spans a set of images. We used the same set of training images originally shown to the network during supervised training to learn the optimal lateral connections. However, for this phase of learning, we do not need the image labels, as our method is completely unsupervised. It is important to note that this formula differs from a Hebbian learning rule, in that only the covariance between the feedforward responses of neurons leads to changes in the lateral connections. A more detailed derivation of the above equations can be found in Iyer_Mihalas17 .

To understand how other commonly used regularization techniques could impact model performance on noisy images, we also tested the use of weight decay (L2 regularization) and dropout. For our experiments, we chose a weight decay value of 0.005 and a dropout fraction of 0.5. Weight decay acted on all non-bias parameters of the model, while dropout was applied after each convolutional layer in the baseline model, as well as after the first fully connected layer. We also tested the combination of these regularization techniques with optimal lateral connections.

We show example learned optimal lateral connections between different filters in the first convolutional layer for both MNIST and CIFAR-10 (Figure 3). For both datasets, we find optimal lateral connections containing both excitatory and inhibitory synaptic weights, which are balanced on average. In particular, we find excitatory weights between cells with similar tuning properties and inhibitory weights between cells with different selectivities, which is consistent with predictions from Hebbian plasticity. Interestingly, although the image statistics between MNIST and CIFAR-10 are vastly different, some of the learned optimal connections are qualitatively similar, emphasizing properties such as contour integration which may be beneficial in the context of noise or occlusion.

Our proposed model adds two novel contributions to traditional convolutional neural networks when considered together: 1) the incorporation of recurrent lateral connections modeling the influence of extra-classical receptive fields, and 2) the ability to learn these connections in a completely unsupervised manner.

The vast majority of deep neural networks are feedforward in nature, although recurrent connections have been added to convolutional neuronal networks Spoerer_etal17 ; Liang_Hu15 . Recurrent connections have also been used to implement different visual attention mechanisms Mnih_etal14 ; Li_etal17 . However, these networks are still all trained in a supervised manner. An exception are ladder networks, which have been proposed as a means to combine supervised and unsupervised learning in deep neural networks Rasmus_etal15 . However, different from our approach, ladder networks use noise injection to introduce an unsupervised cost function based on reconstruction of the internal activity of the network. Our model instead relies on a modified Hebbian learning rule which learns the optimal connections between features within each layer based solely on the activations of these neurons.

The proposed computation carried out by optimal lateral connections can be mapped to a collection of cell types found in the cortical microcircuit Jiang_etal15 . Connections between pyramidal cells often show like-to-like connectivity, and in our model, the strength of these connections is proportional to the correlation in the activations of these neurons. This mapping also suggests two forms of inhibition - local normalization of excitatory neuronal activity in a patch (corresponding to the classical receptive field) and inhibition arising from the surround (extra-classical receptive fields) - we attribute these to parvalbumin and somatostatin-expressing interneurons, respectively.

Neurons are inherently noisy, and their responses can vary even to the same stimulus. These neurons are embedded in cortical circuits that must perform computations in the absence of information, such as under visual occlusion. Optimal lateral connections can provide additional robustness to these networks by allowing for integration of information from multiple sources. This type of computation is also potentially useful for applications in which artificial neurons are not simulated with high fidelity, e.g. in neuromorphic computing.

We chose a relatively simple network architecture as a proof-of-concept for our model. As such, we did not achieve state-of-the art performance on either image dataset. This accuracy could be further improved by either fine-tuning models with optimal lateral connections or using deeper model architectures with more parameters. Future experiments will also have to test the scalability of learning optimal lateral connections on more complex network architectures and larger image datasets (e.g. ImageNet), and whether these connections provide any benefit against noise or other types of perturbations such as adversarial images.

We wish to thank the Allen Institute founder, Paul G. Allen, for his vision, encouragement, and support. We also thank Ram Iyer for helpful discussions.