RMSProp and ADAM continue to be extremely popular algorithms for training neural nets but their theoretical foundations have remained unclear. In this work we make progress towards that by giving proofs that these adaptive gradient algorithms are guaranteed to reach criticality for smooth non-convex objectives and we give bounds on the running time. We then design experiments to compare the performances of RMSProp and ADAM against Nesterov Accelerated Gradient method on a variety of autoencoder setups. Through these experiments we demonstrate the interesting sensitivity that ADAM has to its momentum parameter β_1. We show that in terms of getting lower training and test losses, at very high values of the momentum parameter (β_1 = 0.99) (and large enough nets if using mini-batches) ADAM outperforms NAG at any momentum value tried for the latter. On the other hand, NAG can sometimes do better when ADAM's β_1 is set to the most commonly used value: β_1 = 0.9. We also report experiments on different autoencoders to demonstrate that NAG has better abilities in terms of reducing the gradient norms and finding weights which increase the minimum eigenvalue of the Hessian of the loss function. 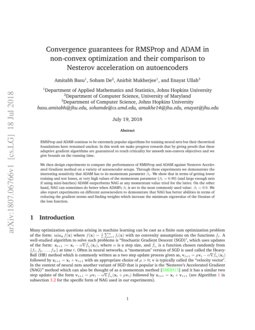 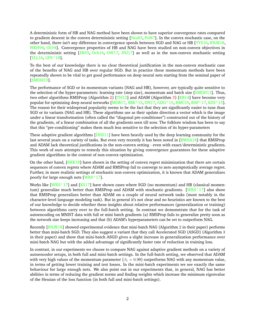 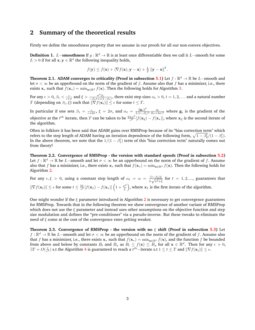 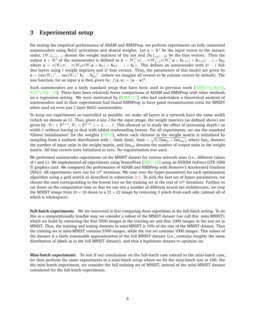 Many optimization questions arising in machine learning can be cast as a finite sum optimization problem of the form:

. Most neural network problems also fall under a similar structure where each function

Momentum methods like HB and NAG have been shown to have superior convergence properties compared to gradient descent in the deterministic setting both for convex and non-convex functions [nesterov1983method, polyak1987introduction, zavriev1993heavy, ochs2016local, o2017behavior, jin2017accelerated]. While (to the best of our knowledge) there is no clear theoretical justification in the stochastic case of the benefits of NAG and HB over regular SGD in general [yuan2016influence, kidambi2018on, wiegerinck1994stochastic, orr1994momentum, yang2016unified, gadat2018stochastic], unless considering specialized function classes [loizou2017momentum]; in practice, these momentum methods, and in particular NAG, have been repeatedly shown to have good convergence and generalization on a range of neural net problems [sutskever2013importance, lucas2018aggregated, kidambi2018on].

The performance of NAG (as well as HB and SGD), however, are typically quite sensitive to the selection of its hyper-parameters: step size, momentum and batch size [sutskever2013importance]. Thus, “adaptive gradient” algorithms such as RMSProp (Algorithm 2) [tieleman2012lecture] and ADAM (Algorithm 3) [kingma2014adam] have become very popular for optimizing deep neural networks [melis2017state, xu2015show, denkowski2017stronger, gregor2015draw, radford2015unsupervised, bahar2017empirical, kiros2015skip]

. The reason for their widespread popularity seems to be the fact that they are believed to be easier to tune than SGD, NAG or HB. Adaptive gradient methods use as their update direction a vector which is the image under a linear transformation (often called the “diagonal pre-conditioner”) constructed out of the history of the gradients, of a linear combination of all the gradients seen till now. It is generally believed that this “pre-conditioning” makes these algorithms much less sensitive to the selection of its hyper-parameters. A precursor to these RMSProp and ADAM was outlined in

Despite their widespread use in neural net problems, adaptive gradients methods like RMSProp and ADAM lack theoretical justifications in the non-convex setting - even with exact/deterministic gradients [bernstein2018signsgd]. Further, there are also important motivations to study the behavior of these algorithms in the deterministic setting because of usecases where the amount of noise is controlled during optimization, either by using larger batches [martens2015optimizing, de2017automated, babanezhad2015stop]

or by employing variance-reducing techniques

also show that ADAM generalizes poorly for large enough nets and that RMSProp generalizes better than ADAM on a couple of neural network tasks (most notably in the character-level language modeling task). But in general it’s not clear and no heuristics are known to the best of our knowledge to decide whether these insights about relative performances (generalization or training) between algorithms hold for other models or carry over to the full-batch setting.

A summary of our contributions

In this work we try to shed some light on the above described open questions about adaptive gradient methods in the following two ways.

Much after this work was completed we came to know of a related paper [li2018convergence] which analyzes convergence rates of a modification of AdaGrad (not RMSPRop or ADAM). After the initial version of our work was made public, a few other analysis of adaptive gradient methods have also appeared like [chen2018convergence], [zhou2018convergence] and [zaheer2018adaptive].

Firstly we define the smoothness property that we assume in our proofs for all our non-convex objectives. This is a standard assumption used in the optimization literature.

L−smoothness If f:Rd→R is at least once differentiable then we call it L−smooth for some L>0 if for all \boldmathx,%\boldmath$y$∈Rd the following inequality holds,

We need one more definition that of square-root of diagonal matrices,

Now we list out the pseudocodes used for NAG, RMSProp and ADAM in theory and experiments,

3 Convergence Guarantees for ADAM and RMSProp

Previously it has been shown in [rangamani2017critical] that mini-batch RMSProp can off-the-shelf do autoencoding on depth 2 autoencoders trained on MNIST data while similar results using non-adaptive gradient descent methods requires much tuning of the step-size schedule. Here we give the first result about convergence to criticality for stochastic RMSProp albeit under a certain technical assumption about the training set (and hence on the first order oracle). Towards that we need the following definition,

Stochastic RMSProp converges to criticality (Proof in subsection LABEL:sec:supp_rmspropS) Let f:Rd→R be L−smooth and be of the form f=1k∑kp=1fp s.t. (a) each fi is at least once differentiable, (b) the gradients are s.t ∀\boldmathx∈Rd,∀p,q∈{1,…,k}, sign(∇fp(\boldmathx))=sign(∇fq(\boldmathx)) , (c) σf<∞ is an upperbound on the norm of the gradients of fi and (d) f has a minimizer, i.e., there exists \boldmathx∗ such that f(\boldmathx∗)=min\boldmathx∈Rdf(\boldmathx). Let the gradient oracle be s.t when invoked at some \boldmathxt∈Rd it uniformly at random picks it∼{1,2,..,k} and returns, ∇fit(% \boldmathxt)=\boldmathgt. Then corresponding to any ϵ,ξ>0 and a starting point \boldmathx1 for Algorithm 2, we can define, T≤1ϵ4(2Lσ2f(σ2f+ξ)(f(\boldmathx1)−f(\boldmathx% ∗))(1−β2)ξ) s.t. we are guaranteed that the iterates of Algorithm 2 using a constant step-length of, α=1√T√2ξ(1−β2)(f(%\boldmath$x$1)−f(\boldmathx∗))σ2fL will find an ϵ−critical point in at most T steps in the sense that, mint=1,2…,TE[∥∥∇f(\boldmathxt)∥∥2]≤ϵ2.∎