One key task of fine-grained sentiment analysis on reviews is to extract aspects or features that users have expressed opinions on. This paper focuses on supervised aspect extraction using a modified CNN called controlled CNN (Ctrl). The modified CNN has two types of control modules. Through asynchronous parameter updating, it prevents over-fitting and boosts CNN's performance significantly. This model achieves state-of-the-art results on standard aspect extraction datasets. To the best of our knowledge, this is the first paper to apply control modules to aspect extraction. 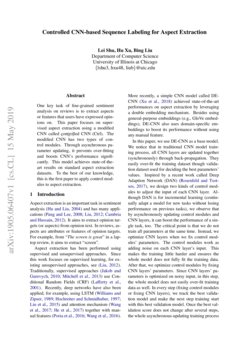 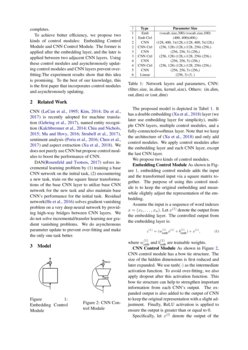 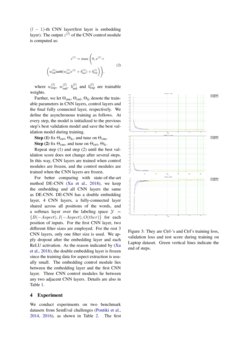 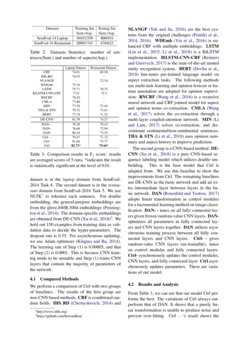 Aspect extraction is an important task in sentiment analysis (Hu and Liu, 2004) and has many applications (Pang and Lee, 2008; Liu, 2012; Cambria and Hussain, 2012). It aims to extract opinion targets (or aspects) from opinion text. In reviews, aspects are attributes or features of opinion targets. For example, from “The screen is great” in a laptop review, it aims to extract “screen”.

In this paper, we use DE-CNN as a base model. We notice that in traditional CNN model training process, all CNN layers are updated together (synchronously) through back-propagation. They easily over-fit the training dataset though validation dataset used for deciding the best parameters’ values. Inspired by a recent work called Deep Adaption Network (DAN) (Rosenfeld and Tsotsos, 2017), we design two kinds of control modules to adjust the input of each CNN layer. Although DAN is for incremental learning (continually adapt a model for new tasks without losing performance on previous tasks), we observe that by asynchronously updating control modules and CNN layers, it can boost the performance of a single task, too. The critical point is that we do not train all parameters at the same time. Instead, we optimize CNN layers when we fix control modules’ parameters. The control modules work as adding noise on each CNN layer’s input. This makes the training little harder and ensures the whole model does not fully fit the training data. After that, we optimize control modules by fixing CNN layers’ parameters. Since CNN layers’ parameters is optimized on noisy input, in this step, the whole model does not easily over-fit training data as well. In every step (fixing control modules or fixing CNN layers), we track the best validation model and make the next step training start with this best validation model. Once the best validation score does not change after several steps, the whole asynchronous-updating training process completes.

The proposed model is depicted in Tabel 1. It has a double embedding (Xu et al., 2018a)

layer (we later use embedding layer for simplicity), multiple CNN layers, multiple control modules, and a fully-connected+softmax layer. Note that we keep the architecture of

Embedding Control Module As shown in Figure 2, embedding control module adds the input and the transformed input via a square matrix together. The purpose of using this control module is to keep the original embedding and meanwhile slightly adjust the representation of the embedding.

CNN Control Module As shown in Figure 2, CNN control module has a bow tie structure. The size of the hidden dimensions is first reduced and later expanded. We use tanh(⋅)

Specifically, let x(l) denote the output of the (l−1)-th CNN layer(first layer is embedding layer). The output z(l) of the CNN control module is computed as:

Further, we let Θcnn, Θctrl, Θfc denote the trainable parameters in CNN layers, control layers and the final fully connected layer, respectively. We define the asynchronous training as follows. At every step, the model is initialized to the previous step’s best validation model and save the best validation model during training.

We conduct experiments on two benchmark datasets from SemEval challenges (Pontiki et al., 2014, 2016), as shown in Table 2. The first dataset is in the laptop domain from SemEval-2014 Task 4. The second dataset is in the restaurant domain from SemEval-2016 Task 5. We use NLTK111http://www.nltk.org/ to tokenize each sentence. For double embedding, the general-purpose embeddings are from the glove.840B.300d embeddings (Pennington et al., 2014). The domain-specific embeddings are obtained from DE-CNN (Xu et al., 2018a)222https://github.com/howardhsu/. We hold out 150 examples from training data as validation data to decide the hyper-parameters. The dropout rate is 0.55. For asynchronous updating, we use Adam optimizer (Kingma and Ba, 2014). The learning rate of Step (1) is 0.00005, and that of Step (2) is 0.0001. This is because CNN training tends to be unstable and Step (1) trains CNN layers that contain the majority of parameters of the network.

From Table 3, we can see that our model Ctrl performs the best. The variations of Ctrl always out-perform that of DAN. It shows that a purely linear transformation is unable to produce noise and prevent over-fitting. Ctrl - -’s result shows the adaptive ability of the control modules. Ctrl - updates all parameters in the overall network synchronously, but under-performs DE-CNN though it has control modules. The reason is that in synchronous updating, control modules just make the overall network deeper. As in Figure 3, the first plot shows that Ctrl- and Ctrl can reach a similar training loss level and Ctrl- is faster. They have the same learning rate. It means that fixed control modules make the training harder. In the second plot, Ctrl- ’s validation loss decreases and then increases. This is an apparent over-fitting signal. But, Ctrl’s validation loss tends flat even after several-steps training. From the last test-score plot, we can see that Ctrl has similar testing performance as Ctrl- in the first step training. In Ctrl’s second step training (between the first and second green lines), the test score continues improving. The results and plots show that through asynchronous updating, control modules can prevent over-fitting and improve CNN performance.