In several real-world applications involving decision making under uncertainty, the traditional expected value objective may not be suitable, as it may be necessary to control losses in the case of a rare but extreme event. Conditional Value-at-Risk (CVaR) is a popular risk measure for modeling the aforementioned objective. We consider the problem of estimating CVaR from i.i.d. samples of an unbounded random variable, which is either sub-Gaussian or sub-exponential. We derive a novel one-sided concentration bound for a natural sample-based CVaR estimator in this setting. Our bound relies on a concentration result for a quantile-based estimator for Value-at-Risk (VaR), which may be of independent interest. 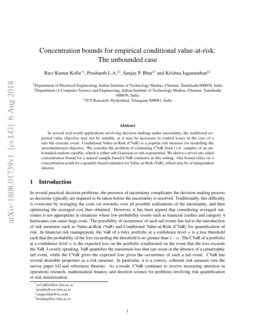 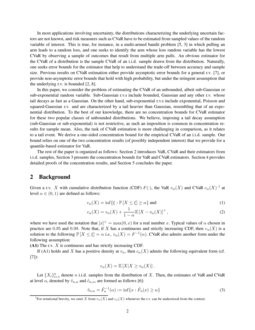 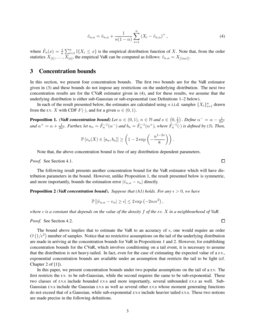 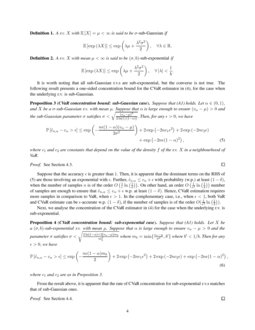 PAC-Bayesian Bound for the Conditional Value at Risk

The Restricted Isometry of ReLU Networks: Generalization through Norm Concentration

This paper is concerned with the process of risk allocation for a generi...
Yuri F. Saporito, et al. ∙

In several practical decision problems, the presence of uncertainty complicates the decision making process as decisions typically are required to be taken before the uncertainty is resolved. Traditionally, this difficulty is overcome by averaging the costs (or rewards) over all possible realizations of the uncertainty, and then optimizing the averaged cost thus obtained. However, it has been argued that considering averaged outcomes is not appropriate in situations where low-probability events such as financial crashes and category 4 hurricanes can cause huge costs. The possibility of occurrence of such tail events has led to the introduction of risk measures such as Value-at-Risk (VaR) and Conditional Value-at-Risk (CVaR) for quantification of risk. In financial risk management, the VaR of a risky portfolio at a confidence level

α is a loss threshold such that the probability of the loss exceeding the threshold is no greater than 1−α. The CVaR of a portfolio at a confidence level α is the expected loss on the portfolio conditioned on the event that the loss exceeds the VaR. Loosely speaking, VaR quantifies the maximum loss that can occur in the absence of a catastrophic tail event, while the CVaR gives the expected loss given the occurrence of such a tail event. CVaR has several desirable properties as a risk measure. In particular, it is a convex, coherent risk measure (see the survey paper [4] and references therein). As a result, CVaR continues to receive increasing attention in operations research, mathematical finance, and decision science for problems involving risk quantification or risk minimization.

In most applications involving uncertainty, the distributions characterizing the underlying uncertain factors are not known, and risk measures such as CVaR have to be estimated from sampled values of the random variable of interest. This is true, for instance, in a multi-armed bandit problem [5, 3] in which pulling an arm leads to a random loss, and one seeks to identify the arm whose loss random variable has the lowest CVaR by observing a sample of outcomes that result from multiple arm pulls. An obvious estimator for the CVaR of a distribution is the sample CVaR of an i.i.d. sample drawn from the distribution. Naturally, one seeks error bounds for the estimator that help to understand the trade-off between accuracy and sample size. Previous results on CVaR estimation either provide asymptotic error bounds for a general r.v. [7], or provide non-asymptotic error bounds that hold with high probability, but under the stringent assumption that the underlying r.v. is bounded [2, 8].

In this paper, we consider the problem of estimating the CVaR of an unbounded, albeit sub-Gaussian or sub-exponential random variable. Sub-Gaussian r.v.s include bounded, Gaussian and any other r.v. whose tail decays as fast as a Gaussian. On the other hand, sub-exponential r.v.s include exponential, Poisson and squared-Gaussian r.v. and are characterized by a tail heavier than Gaussian, resembling that of an exponential distribution. To the best of our knowledge, there are no concentration bounds for CVaR estimator for these two popular classes of unbounded distributions. We believe, imposing a tail decay assumption (sub-Gaussian or sub-exponential) is not restrictive, as such an imposition is common in concentration results for sample mean. Also, the task of CVaR estimation is more challenging in comparison, as it relates to a tail event. We derive a one-sided concentration bound for the empirical CVaR of an i.i.d. sample. Our bound relies on one of the two concentration results (of possibly independent interest) that we provide for a quantile-based estimator for VaR.

The rest of the paper is organized as follows: Section 2 introduces VaR, CVaR and their estimators from i.i.d. samples, Section 3 presents the concentration bounds for VaR and CVaR estimators. Section 4 provides detailed proofs of the concentration results, and Section 5 concludes the paper.

where we have used the notation that [x]+=max(0,x) for a real number x. Typical values of α chosen in practice are 0.95 and 0.99. Note that, if X has a continuous and strictly increasing CDF, then vα(X) is a solution to the following P[X≤ξ]=α i.e., vα(X)=F−1(α). CVaR also admits another form under the following assumption:

(A1) The r.v. X is continuous and has strictly increasing CDF.

If (A1) holds and X has a positive density at vα, then cα(X) admits the following equivalent form (cf. [7]):

Let {Xi}ni=1 denote n i.i.d. samples from the distribution of X. Then, the estimates of VaR and CVaR at level α, denoted by ^vn,α and ^cn,α, are formed as follows [6]:

where ^Fn(x)=1n∑ni=1I{Xi≤x} is the empirical distribution function of X. Note that, from the order statistics X[1],…,X[n], the empirical VaR can be computed as follows: ^vn,α=X[⌈nα⌉].

In this section, we present four concentration bounds. The first two bounds are for the VaR estimator given in (3) and these bounds do not impose any restrictions on the underlying distribution. The next two concentration results are for the CVaR estimator given in (4), and for these results, we assume that the underlying distribution is either sub-Gaussian or sub-exponential (see Definitions 3–3 below).

Note that, the above concentration bound is free of any distribution dependent parameters.

where c is a constant that depends on the value of the density f of the r.v. X in a neighbourhood of VaR.

The bound above implies that to estimate the VaR to an accuracy of ϵ, one would require an order O(1/ϵ2) number of samples. Notice that no restrictive assumptions on the tail of the underlying distribution are made in arriving at the concentration bounds for VaR in Propositions 3 and 3. However, for establishing concentration bounds for the CVaR, which involves conditioning on a tail event, it is necessary to assume that the distribution is not heavy-tailed. In fact, even for the case of estimating the expected value of a r.v., exponential concentration bounds are available under an assumption that restricts the tail to be light (cf. Chapter 2 of [1]).

In this paper, we present concentration bounds under two popular assumptions on the tail of a r.v. The first restricts the r.v. to be sub-Gaussian, while the second requires the same to be sub-exponential. These two classes of r.v.s include bounded r.v.s and more importantly, several unbounded r.v.s as well. Sub-Gaussian r.v.s include the Gaussian r.v.s as well as several other r.v.s whose moment generating functions do not exceed that of a Gaussian, while sub-exponential r.v.s include heavier tailed r.v.s. These two notions are made precise in the following definitions.

where c1 and c2 are constants that depend on the value of the density f of the r.v. X in a neighbourhood of VaR.

Suppose that the accuracy ϵ is greater than 1. Then, it is apparent that the dominant terms on the RHS of (5) are those involving an exponential with ϵ. Further, ^cn,α≤cα+ϵ with probability (w.p.) at least (1−δ), when the number of samples n is of the order O(1ϵln(1δ)). On other hand, an order O(1ϵ2ln(1δ)) number of samples are enough to ensure that ^vn,α≤vα+ϵ w.p. at least (1−δ). Hence, CVaR estimation requires more samples in comparison to VaR, when ϵ>1. In the complementary case, i.e., when ϵ<1, both VaR and CVaR estimate can be ϵ-accurate w.p. (1−δ), if the number of samples is of the order O(1ϵ2ln(1δ)).

where c1 and c2 are as in Proposition 3. From the result above, it is apparent that the rate of CVaR concentration for sub-exponential r.v.s matches that of sub-Gaussian ones.

In this section, we present the proofs of the results presented in Section 3.

Recall the Dvoretzky-Kiefer-Wolfowitz (DKW) inequality, which provides a finite-sample bound on the distance between the empirical distribution and the true distribution: For any ϵ>0,

On the event A, we have

for some ¯v∈[vα−η2,vα+η1]. Using the identity above for the two expressions inside δϵ, we obtain

We first prove a more general result without restricting the sub-Gaussian parameter σ and the main claim in Proposition 3 follows in a straightforward fashion.

[General CVaR concentration bound: sub-Gaussian case] Assume (A1). Let X be a σ-sub-Gaussian with mean μ. Suppose that (vα−μ)>0. Then, for any ϵ>0, we have

First, we bound the estimate ^cn,α. Notice that

The last term on the RHS of (9) can be re-written as follows:

The last equality above uses the fact that 1n∑ni=1I{Xi=^vn,α} takes values zero w.p. 1, since Xi is continuous, for each i.

For handling P[An>ϵ/2], we bound the moment generating function of r.v. Yi as follows:

where (a) is due to the sub-Gaussianity of Xi. Thus,

The first inequality above uses the following fact:

where (d) is due to the DKW inequality. Therefore,

where δϵ1,δϵ2 are as defined in the statement of the proposition, and (a) is due to Proposition 3 and the fact that E[Y]≥0. ∎

for some ¯v∈[vα−η2,vα+η1]. Using the identity above for the two expressions inside δϵ1, we obtain

Observe that, in the proof of Proposition 4.3, sub-Gaussianity is used is bounding P[An≥ϵ/2] following (14) there. Here, we bound the same using sub-exponential assumption.